Documentary maker, Louis Theroux, has a lot to say about the Tiger King himself, Joe Exotic.

Joe Exotic appeared on Louis Theroux: America’s Most Dangerous Pets back in 2011. Louis spent the best part of a week living with Joe Exotic and met other people included in Tiger King on Netflix such as Tim Stark. And now, following the success of the Netflix documentary, Louis Theroux has decided to share his thoughts on the new series and what he thought of the people involved.

In an interview with The Times and on Instagram, Louis has answered a lot of our burning questions and spilled a lot of extra tea. Here’s what he had to say. 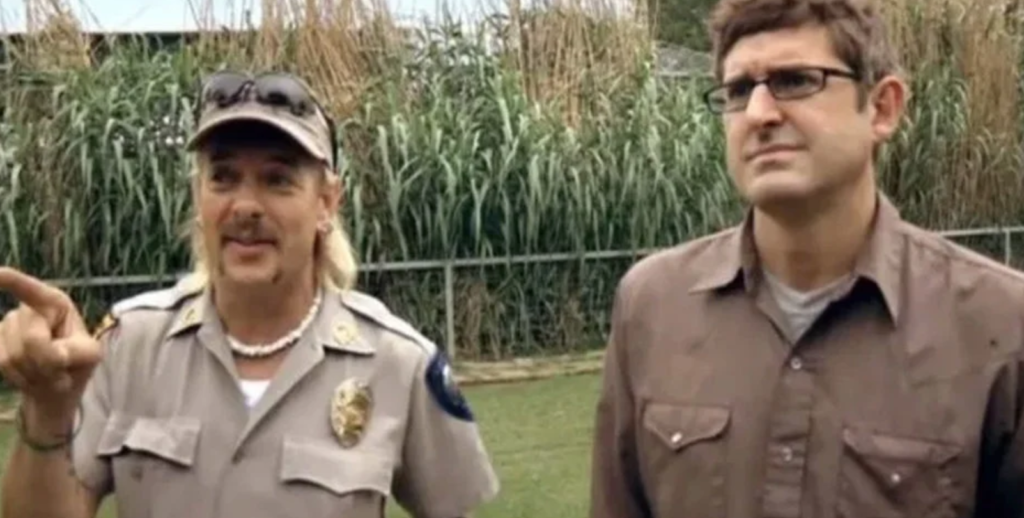 Louis first met Joe Exotic back in May 2011. He describes him as a “skinny, high-voiced good old boy with a dyed blond mullet” and as being a “larger-than-life characters who screams ‘made for TV’.”

Louis says the first thing that stood out to him about Joe Exotic (after his signature mullet) was the blue eyeliner tattooed on the rims under his eyes. In his piece for The Times, Louis said: “He [Exotic] carried a gun, which never left his side and handcuffs, but there were also the aforementioned piercings and an air of heightened emotion. He wore what appeared to be a police uniform, including sergeant’s stripes and a badge, which was very official-looking, except it said: ‘animal rescue.’ Evidently he still had some nostalgia for his time as an officer of the law — though what kind of cop he made was hard to imagine, other than a pretty odd one.”

He describes how Joe used to ‘lurch from crisis to crisis’

As Louis arrived at Joe’s zoo, a tornado was passing through the nearby area. He says the first few hours of BBC filming were spent documenting the spectacle of Joe Exotic placing all his animals in lockdown and contemplating what would happen if all of his animals were let loose by the weather.

Louis says this catastrophic atmosphere always followed Exotic around. “He seemed to lurch from crisis to crisis, constantly on the verge of financial ruin, handling low-level bites and maulings, and being hounded by ‘animal rights people’,” Louis says.

‘It was hard to dislike Joe Exotic’

Louis describes how he warmed to Joe Exotic and found him likeable and friendly. He says he found is ridiculousness quite endearing, not annoying. He goes on to say it was hard to dislike Joe Exotic, because he didn’t seem to hide is misdeeds or take himself too seriously. Louis says Joe Exotic’s laughter, tears, kindness and even paranoia lead to him feeling almost protective over him. 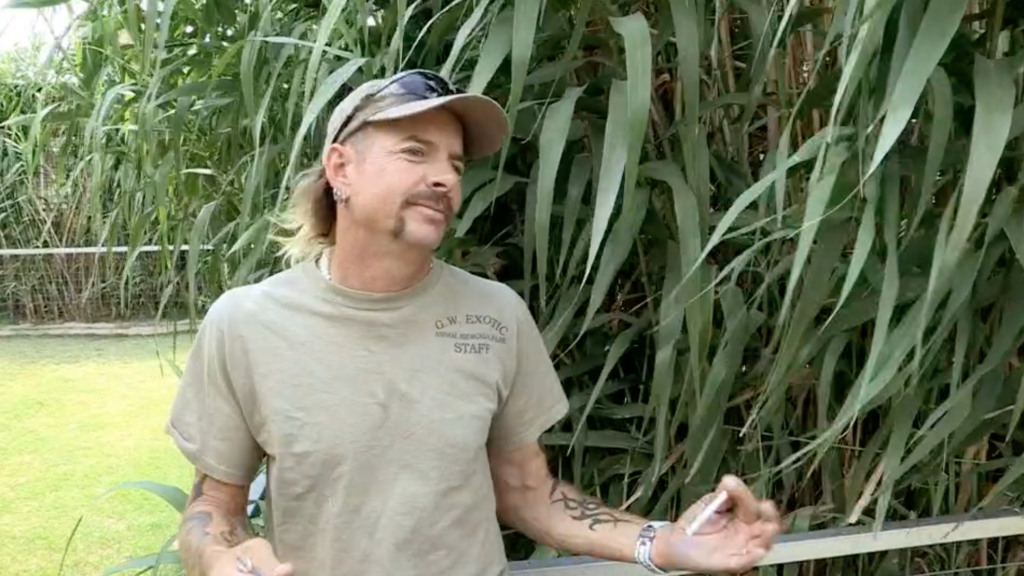 Louis has also been answering questions about his trip to GW zoo on Instagram. He was asked what his funniest moment from the trip was and Louis responded: “The keepers sometimes used to give the chimpanzees colouring books with crayons. I once saw a chimp flick through a book, do a little light colouring, and then calmly eat the whole crayon.”

It seems as though Joe Exotic was constantly worried about how he would come across in documentaries made about him. On Instagram, when asked if he enjoyed Joe’s company, Louis said: “Yes I liked spending time with him. He wasn’t always relaxing to be around though. He was worried about the angle of our documentary. He pulled access for a bit, then we talked him back. Another time I remember him freaking out because we filming near the chimpanzee enclosure and the chimps were going nuts and flinging shit at one of the keepers. I just remember hearing on the keeper’s radio, ‘I want those BBC guys out of there! I don’t want them filming the chimps going crazy!'” 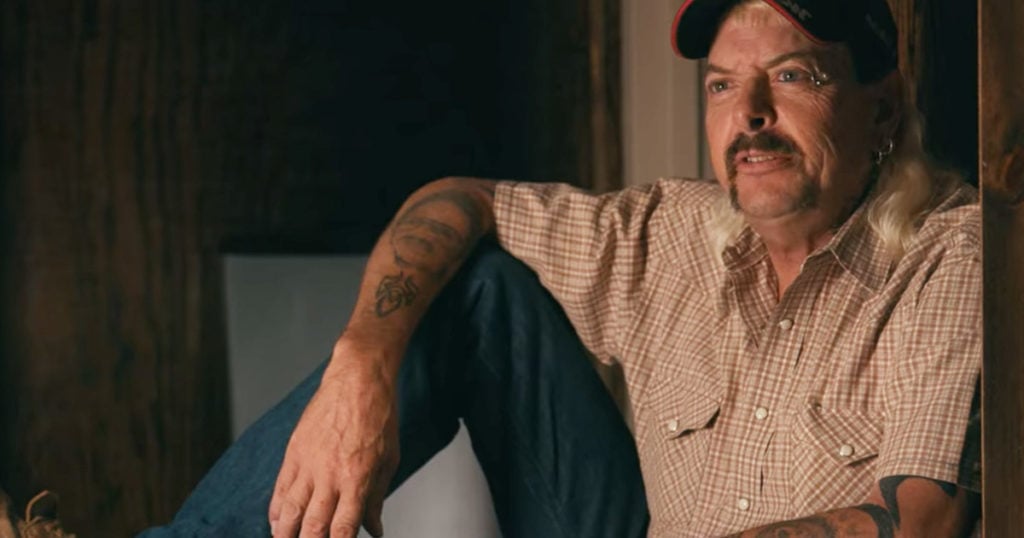 A fan asked Louis on Instagram if Joe Exotic had ever lost his shit in front of him. Louis responded: “I did a long interview with Joe on our last day where I pushed him a bit hard. I recall he was crying and then he took off his mike at one point and stomped off and then he came back. He’s an emotional dude and he was constantly saying that the park was on the verge of collapse due to its bills. The most troubling thing he said was probably that if the park went bankrupt he would kill all the animals.”

Writing in The Times, Louis says: “Joe’s emotional frailties, combined with his flamboyance, may also help explain his apparent romantic success. In Tiger King we see him married to two much younger men, both quite good-looking, though one of them, John Finlay, is somewhat lacking in teeth. When I knew Joe he was also in a three-way domestic arrangement, with John and a different third person, Paul, who was in his twenties. In the film we made only a brief mention of Joe’s love life, in a scene in Joe’s kitchen in which he explained, regarding jealousy, that love-making only happened with all three involved. ‘It works awesome,’ he said, then laughed and added: ‘Because we’re all too tired to have sex.'”

He says Tim Stark is ‘cut from a different cloth’

Louis says that Joe Exotic was by far not the strangest character he met whilst filming his documentary. He also met Tim Stark, who is featured in Tiger King, and described him as being “cut from a different cloth” to Joe Exotic. He describes Tim Stark as “Vietnam vet chic, decked out in camo, head shaved, with a handlebar moustache. His exotic animals seemed an extension of a certain attitude of unapologetic masculinity.” 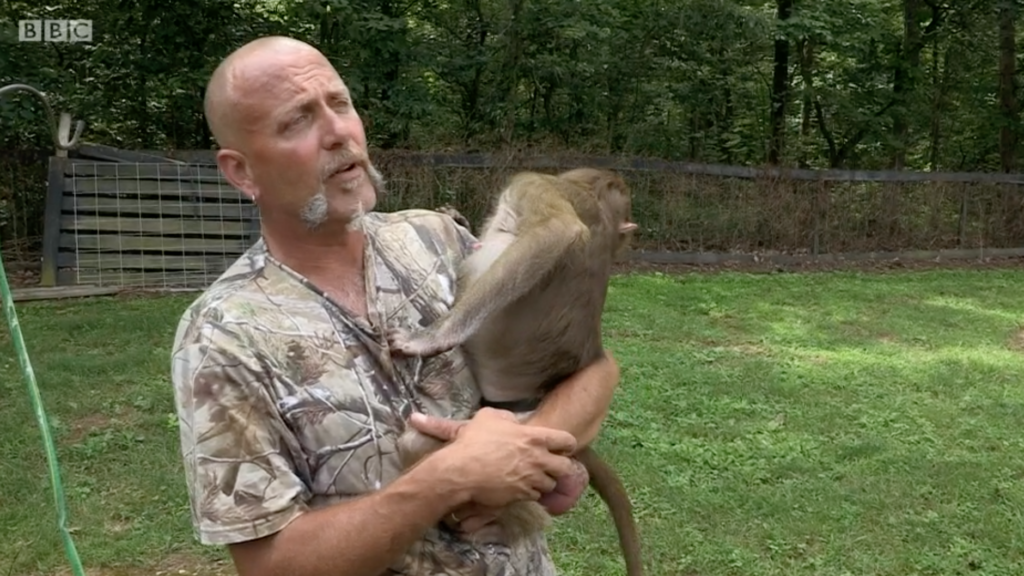 Louis claims Tim got into a punch-up with a bobcat, tussled with a white tiger on a leash and draped a baboon over him. Louis says he was left “speechless” by Tim Stark’s theories about how animals feel and survive.

A huge part of Tiger King on Netflix is dedicated to the ongoing feud between Joe Exotic and Carole Baskin. Louis Theroux says the feud was apparent whilst he was with Joe too, and the “grudge” “preoccupied” him during the filming time. Louis Theroux says Joe Exotic would rant about Carole Baskin and his theories that she killed her husband. On Instagram, Louis confirmed he thinks the theories about Carole are highly unlikely.

When speaking about Joe Exotic’s zoo staff, Louis describes them as having “a whiff of desperation about them: waifs and strays, getting by on tiny wages and the free room and board (the same Walmart leavings donated to animals). With facial piercings and expressions of bewilderment, they would wander about the zoo like kids on their gap year, waiting for someone to tell them what to do.”

He says he greatly enjoyed the series, even though he felt greatly envious that he wasn’t involved himself in the Netflix hit-series. He adds: “If I have a quibble with the series, or maybe just a cautionary note, it’s that the carnival of human folly it depicts should not blind us to the pressing, and less amusing, animal issues at its heart: playthings of a more powerful predator, kept in captivity because of human acquisitiveness, ostentation and control. In the name of preservation of species, many of the owners I met paid scant regard to actual safeguarding of habitats. ‘The wild?’ they would say. ‘There’s no wild left’.”

Oh, and he thinks Carole Baskin is behind coronavirus

A fan asked Louis if he thinks Carole is behind COVID-19 and he said yes, adding: “I think she invented it by accident one day when her flowery headband got caught in her meat grinder.” Same Louis, same.

Tiger King: Murder, Mayhem and Madness is available to watch on Netflix now and Louis Theroux: America’s Most Dangerous Pets is available on BBC iPlayer. For all the latest Netflix news, drops and memes like The Holy Church of Netflix on Facebook.