Ranked: The unis making billions of pounds a year

A pair of UK unis are making over £2 billion a year, new data has revealed.

Figures released by HESA comparing the income of UK universities in 2018/19 show Oxford and Cambridge topping yet another league table.

With both making over £2 billion in the 2018/19 academic year, it was a long way down to the rest of the country’s unis.

UCL could only look up and stare at Oxbridge with the same envy employed by most of its students, finding nearly £1 billion between it and Oxford at the top of the table.

Edinburgh and Manchester rounded out the top five in the rich list.

Check out the rich list of the top 20 unis with the biggest incomes below: 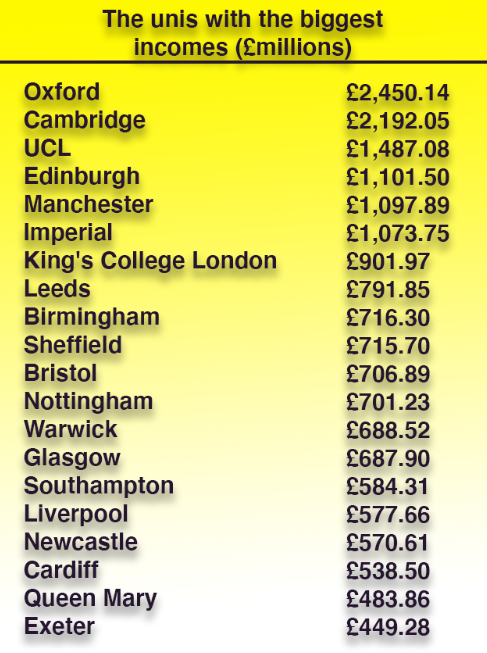 Oxbridge stand apart from every other uni in that both received over £110m in income from donations and endowments. The closest uni after this – Imperial – raked in only £76m in donations, whilst fourth placed UCL was was behind on £40m.

Oxford also managed to get £100m in investment income, confirming it’s the level of rich where even its money makes money..

UCL was the top of the pile when it came to making money from tuition fees, with around a third of its income falling under the “tuition fees and education contracts” category.