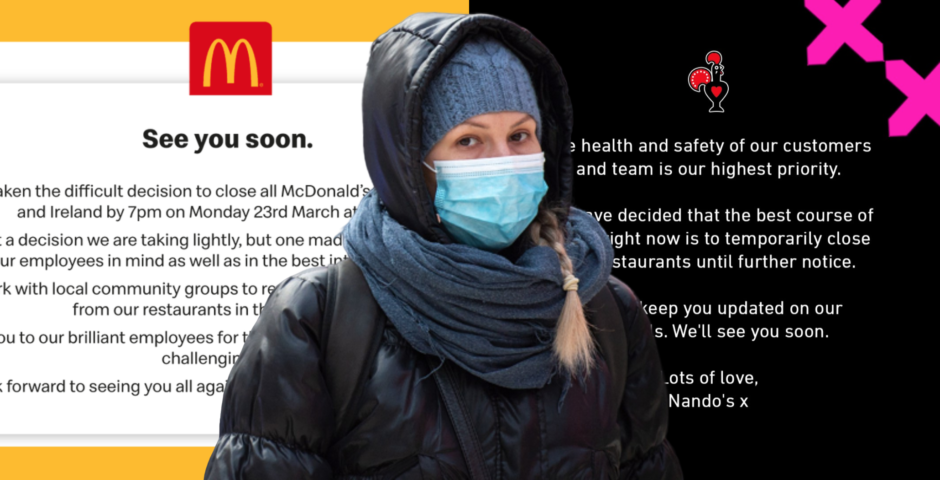 The coronavirus has claimed its latest restaurant victims in the form of two of the most popular UK eateries, all within the space of 24 hours. McDonald’s and Nando’s both released statements on Sunday evening, revealing that they’ve had to temporarily cease all operations for the time being until it’s safe to do so due to the COVID-19 outbreak.

Up until recently, both were still offering takeaway food services as well as deliveries, but it was decided that they must close for the wellbeing of their staff and customers. McDonald’s was first to release their statement, tweeting:

An update from McDonald’s UK and Ireland — See you soon pic.twitter.com/43moFRrWRR

Then, just as people were preparing to take their takeaway business elsewhere, Nando’s were next several hours later:

This news of both Nando’s and McDonald’s closing has understandably gone down with much commiseration from people across the UK. Many took to Twitter to share their sadness:

*no gym* well at least I have McDonald’s
*no McDonalds* well….. Nando’s should do the job
*no nandos* pic.twitter.com/E2MrLcHgpX

This is the latest in a string of measures from both independent retailers and the government to tackle the spread of the virus, and closures don’t seem to be affecting the food industry alone. The Retail Gazette wrote that “John Lewis, Clarks, Ikea, TK Maxx, Apple, Selfridges, Fenwick, Calvin Klein, Sweaty Betty, Boden, Oxfam and the Arcadia Group retail empire already announced their store closures in a bid to contain the spread of the highly contagious virus.”

Although most international businesses have stressed the temporary nature of their closures, it is increasingly likely that shops will take as cautious an approach as possible, riding the virus out until there is little to no risk that their customers could be affected. Essentially, you may not be getting your Maccies fix for a fair while.

• King’s fresher with coronavirus warns other students to stay indoors

• These are all the celebrities who aren’t taking coronavirus seriously

• The expandemic: How coronavirus is making your ex slide into the DMs