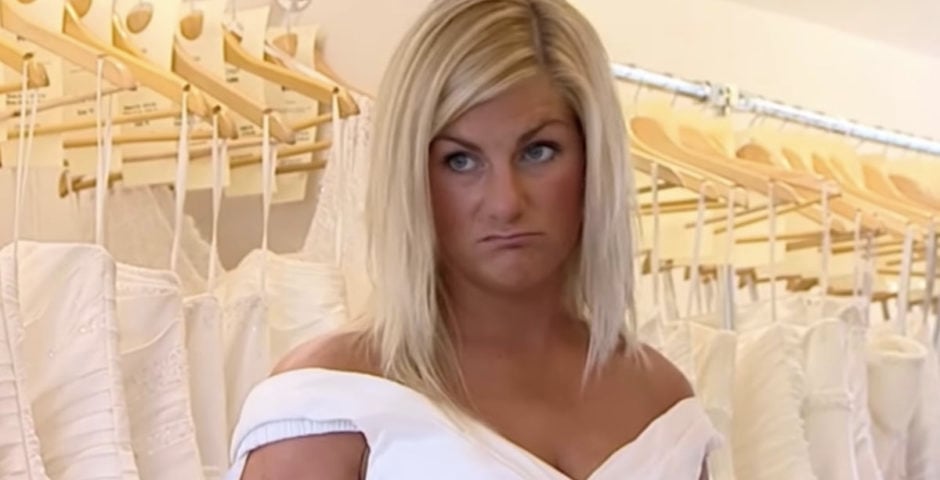 Don’t Tell The Bride is a British institution of TV, a cult classic if you will. Giving complete control over to the groom to plan the wedding in exchange for £12,000? BBC Three knew exactly what they were doing.

Over the years, there have been a number of disastrous weddings. Some didn’t go ahead, there were awful dresses, completely bizarre themes and relationships which were never the same.

A recent episode was called the worst ever, but honestly, the 2020 weddings have nothing on the classics. As the new series kicks off, it’s time to reflect on the worst weddings of Don’t Tell The Bride, and there are some real shockers.

Here are the worst weddings in Don’t Tell The Bride:

This is hands down the worst/funniest wedding. Who could forget when the groom Simon, flew over to Las Vegas to plan the entire wedding based off a bet. His bride Kayleigh wanted a traditional English wedding. And then, because he’d blown the budget he can’t afford to fly her brother over. Her brother!!

The look Simon gives when Kayleigh says down the phone: “You’ve torn the whole family apart Simon” is priceless.

When she does eventually arrive at the airport, she gives him the biggest cold shoulder and suggests she doesn’t think the wedding will take place.

But obviously they did get married.

The groom planned the entire wedding based of the couples’ shared love of pigs. This is like when you were 13 and casually mentioned to your mum you liked Justin Bieber’s new album and she’s still you getting you his calendar now.

Anyway, the groom planned the wedding to take place on a pig farm. He got the bridesmaids pig onesies. They honestly look like they wanted to kill him.

He justifies his reason for the awful location with “you love pigs though”, to which the bride replies “not this much”.

After they exchange their heartfelt vows, the farm puts on a pig race. And the bride sits in a car. Will these men ever learn?

‘This is the most embarrassing thing to happen in my life’: The one where they got married in an IKEA

To be fair, at least they could have meatballs and chips for their wedding breakfast.

The groom decided to plan the wedding in IKEA because it was where the couple went to sort out any arguments they had over something trivial.

He wanted to “flip that on its head and bring her to IKEA on her wedding day, her biggest day of her life and show her that this could be a really happy place where we don’t argue and she has the best day of her life.”

Well, when she arrives in the IKEA car park she definitely doesn’t look like she’s having the best day of her life. The wedding takes place in a sectioned of part of the shop, so it’s not entirely unromantic.

The groom getting to pick the wedding dress is always one of the iconic moments of any episode. Literally never seen any of them get it bang on.

And this episode was quite frankly, a disaster. The bride has visions of a very sparkly, blingy wedding dress whereas he wants a simple plain dress for her. Which is exactly what she gets.

The bride is very pissed off and when she gets her maid of honour to call him up to ask if they can add some crystals to the dress he says “if she would rather put her chav bling on it then that’s fine” and hangs up the phone. Savage.

When the groom plans the entire wedding as an elaborate prank

I would probably kill any man that did this to me but it’s pretty jokes.

The groom stages a series of pranks for their wedding day. He includes trashing the flat she’s getting ready in for the big day, has the wedding car break down and she turns up and walks down the aisle of someone else’s wedding. They were obviously actors and didn’t really ruin anyone else’s special day.

She did actually find it pretty funny and they got married.

The swimming costume instead of a wedding dress

Imagine turning up on your wedding day and finding out you have to get married in a swimming pool. And then your bridesmaids produce the pink swimming costume you have to wear to do it. Oh and did I mention it’s got a big black heart on the front of it. Shocking.

She actually went though with it as well. What a trooper. I would have been swimming away fast.

The mother of the bride saying “are you having a laugh???”

The groom decides it would be hilarious to send his bride a fake joke dress before sending her the real dress.

But what was funny, was the mother of the bride’s reaction “are you having a laugh????” I just love it.

When the bride had to wear football boots

Football boots? Seriously. Not even going to comment on this one.

Alice’s fiancee planned the wedding around Alice in Wonderland and the wedding is certainly as trippy as the book.

First of all he gets her this incredibly tacky short dress which, as she says “you can literally see my pubes in”.  You can’t actually see them but the point is it’s an awful dress.

Then he asks all her family to spend £500 each to fly themselves to New York for the wedding. One of the family members goes “but I’m moving house next week”, which is just such a priceless British reaction.

“MUM! Why haven’t you controlled this?”

Will these brides never learn their mums literally no have control. That’s the point of the show.

Another Las Vegas themed wedding where the groom said “are you not impressed?” and she said “no”

After the groom plans an entire wedding based around Las Vegas, the bride turns up and he asked if she’s impressed. Her “no” coupled with the disapproving look is just classic.

Also the groom dropping his ring and nervously laughing at the beginning just says it all really.

A stag do in Amsterdam, nothing original there, but I just love watching drunk British people make complete fools of themselves.

After watching his new son-in-law get donned up in leather, the father of the bride says “I’ve gone from proud to sick” and wow, if that isn’t all of us watching our mates on a night out, I don’t know what is.