The group of students facing suspension for occupying a Stirling University building are set to take legal action against the University.

Occupiers were originally handed a two-month suspension for padlocking the management building’s fire doors, which the University said “caused a serious and prolonged breach of fire safety regulations.”

Members of the group have confirmed to The Tab they are in the process of getting legal advice while they appeal the decision, and have released a statement on Twitter calling the sanctions applied to them “draconian.”

Lauren Harper, one of the suspended students, told The Tab: “When we got suspended it really took a toll on my mental health, but the solidarity we have been shown has really given me a sense of hope.”

We will not take the University attacking peaceful direct action quietly. Check out our latest statement 👇👇👇 pic.twitter.com/tMBEllyrEj

The group, now calling themselves Suspended Students of Stirling, barricaded themselves inside the management building in November last year “primarily in support of the UCU strikers but also over grievances over mental health provision and housing conditions on campus.”

The University handed the group the eight-week suspension last week, accusing members of causing “a serious and prolonged breach of fire safety regulations” by padlocking several fire doors during the protest.

According to emails seen by The Tab, the suspension will mean the group “will not be permitted to study at the University,” and “will not be able to submit assignments or participate in examinations.” 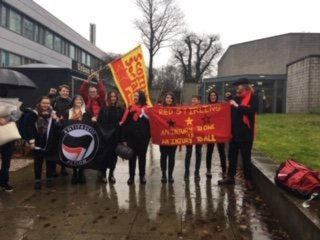 Members of the group claimed they would be immediately evicted from University accommodation, however a spokesperson for Stirling categorically denied this in a comment to The Tab.

“The safety and wellbeing of our University community is of paramount importance, and the fire risk posed has been a central consideration during the disciplinary process,” they said. “While that process and any appeals continue, no students involved are required to vacate University accommodation.”

A series of leaked emails seen by The Tab reveals students will be kicked out of halls if the appeal fails and the eight-week suspension comes into place.

“People are quite stressed and anxious,” a member of the group told The Tab. “However the support we have received has really helped us deal with the worse of it.”

Lauren said: “I’m looking into moving out of the University accommodation ASAP anyways.” 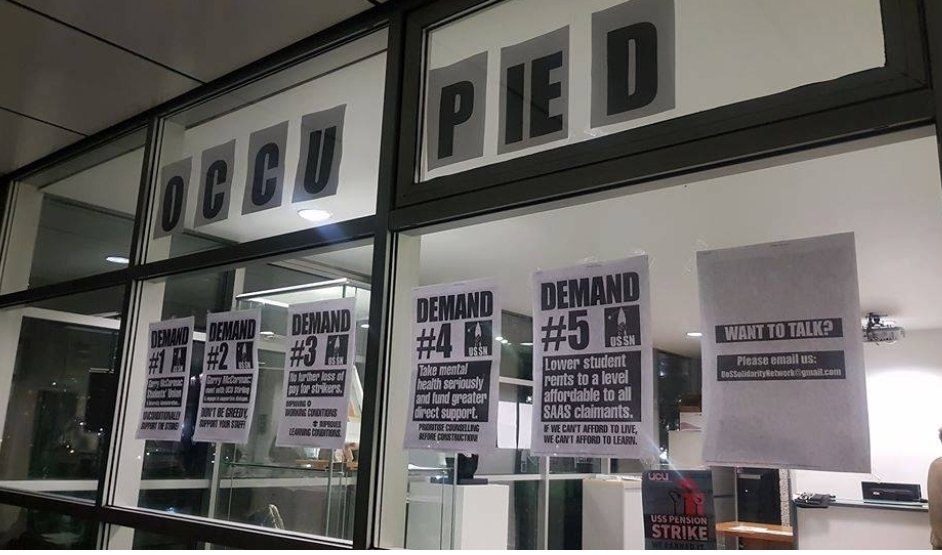 The full statement released by the group reads: “Stirling University suspended a group of 13 students who had occupied a management building on campus.

“Three of the students took legal advice and their solicitor, Daniel Donaldson of Legal Spark Solicitors in Glasgow, wrote to the University today.

“The legal correspondence appealed the disciplinary sanctions and threatened to sue.

The university claimed the disciplinary action was taken because of an alleged breach of their campus health and safety rules and that lives were placed at risk by the student group.

“However this position is robustly challenged by the three students.

“The students claim they were pro health and safety; they were raising awareness of the University’s failure to respect the health, safety and wellbeing of staff alike.

“The protests were taken as a last resort; all because the University failed to listen to student concerns and has failed to honour previous mental health commitments.

“They further claim that they implemented the health and safety advice given to them.

The solicitor added: “The University has not acted reasonably; it is likely the University has behaved unlawfully and has applied draconian sanctions in victimisation – in pure retaliation for the protest – not because of any health and safety reason.

“Sanctioning the students is grossly disproportionate; it is a breach of human rights law.

“Unlawful discrimination is prohibited by the Equality Act 2010.

“There is no evidence the University protected students’ philosophical beliefs regarding solidarity and trade unionism.

“It also appears the University discriminated in disability by association; namely that the students were protesting campus mental health.

“The University should be mindful that the legal bill from any court will be substantial and could affect the financial viability of the University.”

A University spokesperson told The Tab: “The safety and wellbeing of our University community is of paramount importance, and the fire risk posed has been the central consideration during the disciplinary process.

“While that process and any appeals continue, no students involved are required to vacate University accommodation.

“While the disciplinary process is ongoing, the University will not speculate on the outcome.”