I owe so much to Tom Nook

There were a lot of great games around in our childhood. All of them had moments of fun – the thrill of Super Mario Bros, the responsibility of Nintendogs but nothing had the range of Animal Crossing. There were so many elements to this game – you had a whole town to play with, various shops, so many characters, treasure, risks, danger, and this is before you’ve connected with your friend’s town.

Hours of your childhood were eaten up by this game and you’re not mad about it. Your mum had a go every time she heard that repetitive lift music but you didn’t care because Tom Nook needed you. You look back fondly, you reminisce with your mates but have you ever composed a considered and detailed list of all the reasons Animal Crossing was unparalleled. Well, no need because here it is:

A weird way to start the game – it kind of felt like the beginning of a horror movie.

This is also when you got to choose your town name which you instantly regretted. The turtle taxi driver was really helpful along the way but he also didn’t stop talking, I swear that car ride went on for 20 minutes?

Designing your house was endless hours of fun

The first time you do it, you don’t have much to work with – a sofa, a bed and maybe a lamp. But even so, choosing the wallpaper and carpet design was so exciting. Also rearranging the room to give yourself more space and make it your own.

Then, when you built up your income, you upgraded your house to three floors and brought in a fancy new wardrobe.

If you left it a while between rearranging your house, a cockroach would run out from under your sofa

This was always terrifying. Your Animal Crossing character would initially jump, then once they’re composed would chase it around the room until they grabbed onto it and showed it to you. You felt so proud.

Mr. Ressetti the mole who would tell you to go to sleep

The villain of the whole game. You didn’t know when he was coming for you but when he did it was awful. So much anger in such a tiny mole. Sometimes, if you hadn’t gone on the game for ages you would actually get anxious waiting for the moment his angry face would pop up and tell you off for all the shit you hadn’t done.

Shaking the trees for oranges and apples

Simple, unlimited fun. There were so many trees to shake. Once they fell you could pick them up and pocket them or eat them in two bites even though they were the same size as your head.

Also, sometimes treasure would fall out of the trees that you could also pocket and sell.

Like finding a cockroach under your sofa, this moment was a mix of NOOOOO but also excitement. You always think you can out-run the bees until you accidentally bump into someone which slows you down and you get attacked.

Also, while you have your big, purple swollen eye, anyone you spoke to that day jumped when they saw your face. That sucked.

Logging in after a while to find the seasons had changed

This was especially exciting when it was winter and you rolled a snowball into a Snowman.

Going to your friends’ towns, shaking their trees and planting a new species of tree in your town

You felt a little bit bad for bringing a different tree into your town but also proud of yourself for introducing some originality to the area.

When you saw your first coconut and cherry tree

You could sell the cherries and coconuts for more money. They also looked so much prettier.

You naturally had a lot of respect for Tom Nook – he welcomed you into the town, gave you a home, supplied you with useful goods from his shop. He also wore a sick sweater vest that made him kind of sexy? However, you still never got your fucking deposit back, the greedy racoon bastard.

The various stages of Nook’s Cranny

Every new upgrade was super exciting. Names included: Nook’n’Go, NookWay and Nookington’s (which was a full-blown shopping centre – go on Tom Nook!) 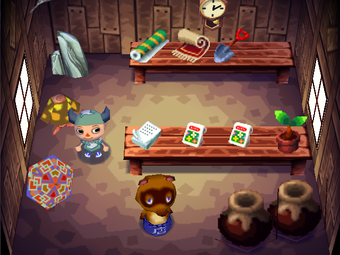 No greater feeling than making your own carpet design and using it in your house. Then putting the same pattern on a hat, jacket and skirt and wearing your original look around town.

Harriet the boujee poodle that would give you a fresh blow out without fail. Until one day you spend your money, put your trust in Harriet and she gives you a blue up-do when you asked for blonde pig-tails !!!

Nintendo devices were 1000x times more temperamental than Bluetooth connections of the same era, so it was almost impossible to actually achieve this, but when you managed to enter through the large doors at the top of the map, it was euphoric.

Found old pics of when my brother made a Celtic top on my animal crossing save and all my villagers started wearing it djdjfjc pic.twitter.com/Dk6UUBKRMA

And then it wasn’t a fossil it was just a big exclamation mark that would push you over – what the fuck was that about?!

The mix of joy and frustration every time you went fishing

There’d be times where you’d see the shadow of a whopper, and it would end up being some dead fish. But then sometimes you’d smash it with a red snapper. Other times you’d just miss the correct timing of tapping the button and throw the DS down onto the sofa in disappointment. Regardless, this was an amazing experience.

Then spending your afternoon walking around the museum because even in Animal Crossing there’s time to be cultured.

Laying on the floor, gazing at virtual stars was pure peace.

my only wish for the animal crossing is that the bring the observatory back and u can go star gazing again, and that we can go on cute little dates

The characters sometimes talk like dickheads but they’re safe

A strange part of the game was that some characters would get into a bad mood and you had to deal with it. You knew they were in a bad mood because their face was all angry and they’d only say “@$%£[email protected]*” to you.

There wasn’t really a point to this but it’s character building and did a good job with preparing kids for the real world.

Or a letter in a bottle – it was actually quite a romantic game.

Every time any character stopped walking, they’d bob and sway on the spot

This was so specific to the game’s aesthetic. Thinking back to this is what makes me feel a bit weird but it’s also what I miss the most.

Going to watch a gig in the basement of The Roost by K.K Slider the dog

When my man said “🎵Bah bee baaaaaaah 🎵” I felt that.

Serious question why is KK Slider the only one in Animal Crossing who doesn't wear clothes pic.twitter.com/hJbSmaVPXC

If you went to the posh town, there were always fancy animals walking around in suits and top hats, and the fashion shop was way out of your budget.

Or if you went to the beach, you were guaranteed coconut trees and shells in the sand, such bliss.

The joy of seeing the Mayor stood outside the Town Hall

If you got really lucky, you’d catch the Mayor as he was doing his daily duties outside the Town Hall. You felt like a pretty big deal going over and having a chat to the big man himself.

If he wasn’t outside the Town Hall, he was asleep behind the desk inside.

You literally got rewarded for recycling – Animal Crossing was so ahead of its time.

Every now and then you’d go to visit a character you loved in their house and everything they owned would be in boxes. You could speak to them and try to persuade them to stay, but they never did. Young me was not prepared for this heartbreak.

When the flea market was in town, things got lit. There’d be bunting everywhere and you could visit people and just buy all their furniture off them. If you hung around in your own house occasionally someone would pop their head in and offer you 100 bells for your old sofa. Sure, take it, it’s yours.

I don’t know about you, but when the flea market was in town I’d just empty crap out of my pockets onto the floor in my house and hope people would come along and buy it off me.

Usually something you’d caught, and it would live in a little glass box on a side table. About once a week you’d make your lil character stare at it for a few seconds.

• Which iconic Mario Kart track is your uni?

• Everything you’ll remember if you spent your teens on Tumblr