A fresh round of strikes are coming to universities next week. From 20th February, UCU members will walk out in a dispute over pensions, pay, casualisation, and working standards.

For some, they’re the third wave of industrial action to hit in three years. With SU presidents privately conceding the strikes might stop students graduating, and disgruntled students starting petitions to get their fees back, it’s up in the air.

But what are the strikes all about? Should you be asking for compensation? Will the strikes just continue forever? The Tab put students’ questions to Dr Jo Grady, the UCU’s General Secretary, in a bid to get answers.

What are the strikes all about then?

Staff have tried to resolve the key issues that face them through so many other mechanisms. The four fights dispute is covering workloads, which are becoming intolerable for staff. It’s covering the extent to which casualisation has become the default business model for institutions. It’s covering the scandal of equality pay gaps, and it’s actually covering the money that you get paid.

That’s because universities have systematically really done very little about it. Some have done nothing at all.

We cannot keep on being the shock absorbers as a marketised system. That damages both students and staff and fundamentally damages the relationships that they have with each other. That’s really why the dispute has unfolded and we are taking strike action because employers continue to not adequately address those big key issues.

Do you support students asking for compensation?

When staff want to protest about these things, they have to forego pay in order to make you sit up and take notice. If students want to pursue a university for compensation, I wouldn’t stand in the way of a student doing that. But I think the far more important conversation is about why you’re chronically underfunding investment in your staff, which is investment in students as well. And what do you do with that money that staff forego?

Sunday evenings are great for tying up loose ends before the new week begins. Why not spend 2 minutes this evening to locate your HE ballot and vote #YesYes or #YesYesYesYes for strike action ✊?⚡️?#NewProfilePic #UCUballot #UCUstrike pic.twitter.com/ZHHapUilM7

Is there anything students can do differently to last time to put pressure on universities?

Students can really stand shoulder to shoulder with staff and not allow themselves, whatsoever, to be weaponised by university leadership teams who are trying to drive a wedge in between students and staff.

Staff take strike action like this when they know that, actually, the consequences of not doing so are far more detrimental in the longer term to their students. If students are able to be very visibly and vocally supportive of staff, that’s good.

So two main ways: not allowing yourself to be weaponised and actually being proactive in trying to find ways to exert pressure on management. The student voice is disproportionately heard and I just don’t think students sometimes really know that’s the power they have if they choose to really stand up for their staff.

Do teach out groups, where students or staff lead study groups on picket lines, reduce the effectiveness of strikes if they’re making up for content lost?

What I’ve always thought the teach outs represent is not an attempt by the picketing and striking members of staff to somehow ensure that effective learning as per the module outline continues.

I think it’s much more about recapturing the idea of, what are we here for? What do we want to discuss? Is it fine to read a book that isn’t on your reading list? I remember when I first went to university, and there was no problem whatsoever with just attending any lecture that was happening at the university. The idea is almost a bit of a foreign concept to some people that, you know, you might take an active interest in something that’s not necessarily part of your discipline. And I think the beauty of the opportunity provided by teach-outs is precisely that. 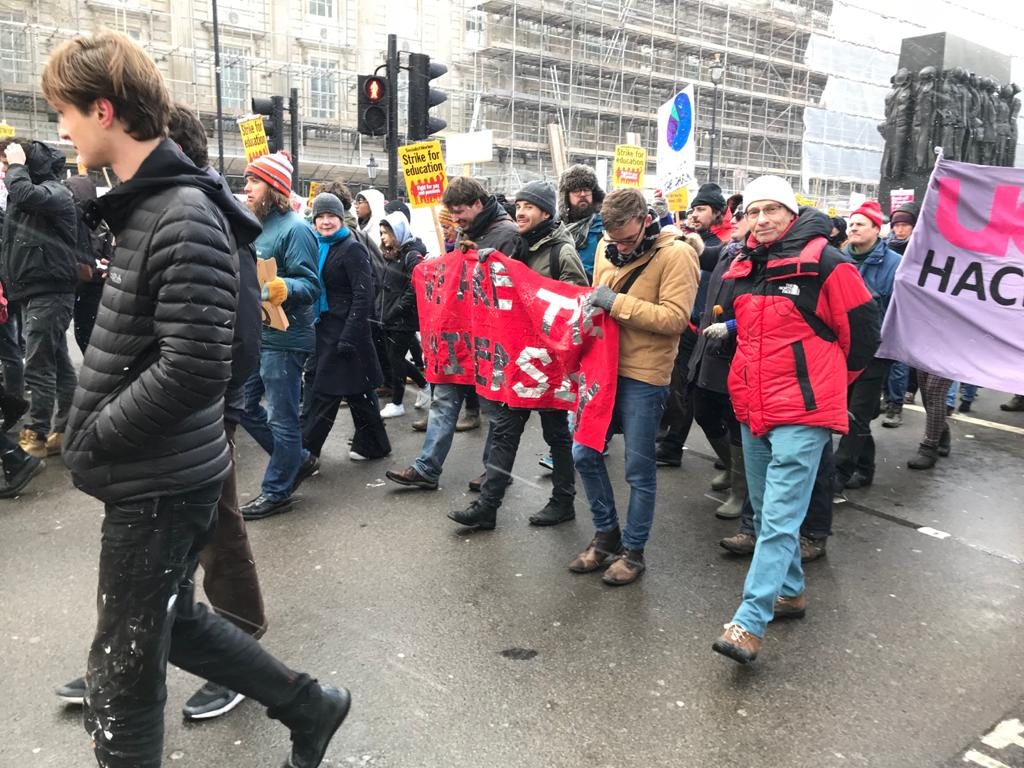 Do you think these strikes are going to be the ones that tip the scales and make a difference when the ones in the past haven’t had the desired impact?

I think it’s a bit of a misrepresentation to say the previous strikes didn’t achieve something. What you have to say sometimes it actually takes several attempts to actually get to the end goal and to get an actual satisfactory outcome. The problem with the pension dispute is this resolution that came out of the previous dispute prevented the downgrading of the pension scheme, but it still left a lot of things unresolved.

With the four fights dispute – over casualisation, workload, equality, and pay – this is the start of a very long movement of change, I would say, on how universities systemically value and reward staff.

Will you keep striking if there’s no change or will you try some different tactics?

What it actually will look like if it continues will be the process of a democratic decision by the branches within the union. But what’s very clear from the ballots we’ve had – both in pay and pensions – is that our members are very energised and committed to getting these issues not just resolved, but actually addressed and systemic change to occur.

Some staff have said they won’t be striking because they can’t afford to lose even more pay. Some have even said this new round strikes is too much. How engaged you expect staff to be nationally, so soon after the last round the strikes?

It’s a big commitment to say, I’m going to take strike action. We know that people do lose money and we know that there is a financial penalty for actually standing up for your rights. What I’ve been saying to UCU members is you take every day at a time in strike action. What we want is people to join us, for people to come out strong and take strike action on that basis, because what we’re trying to do here is get employers to turn around and say, we will work hard with you to get a resolution here.

What we’ve seen in the past is that they do that when more of us are willing to take action, and we take it if we need it. 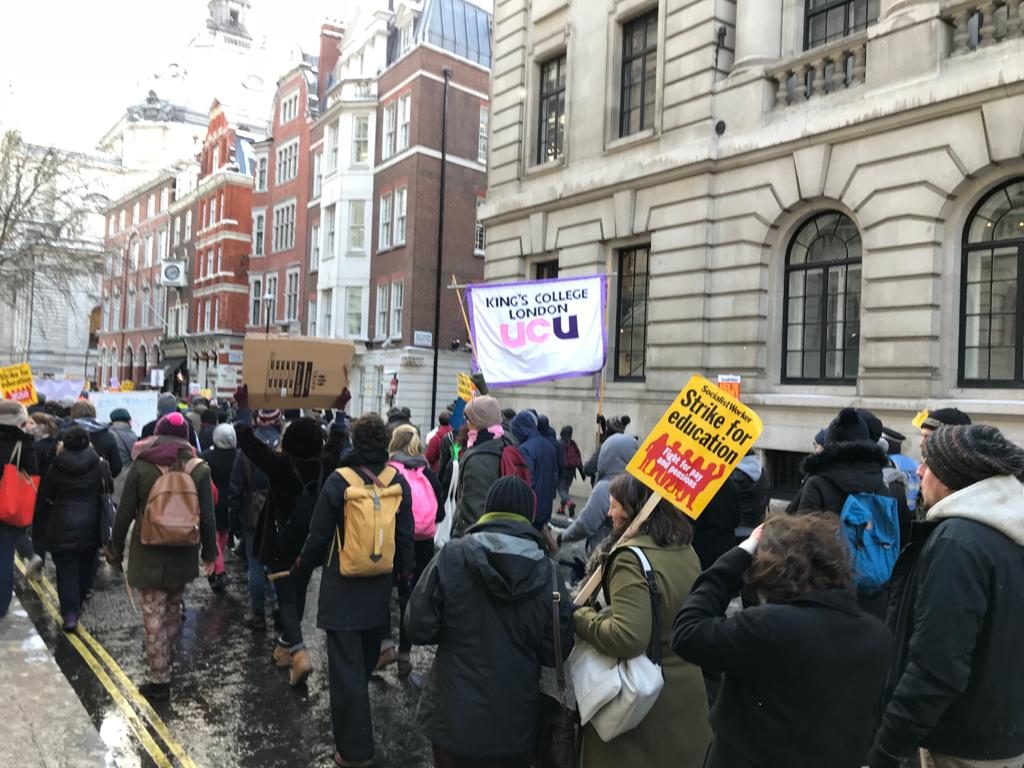 What would you say to lecturers who are choosing not to strike, whether it’s for financial reasons, or to try and help their students are quite crucial time in their degree?

The idea that people who are taking strike action don’t care about their students is quite an unfortunate framing, because one of the things that we are saying, particularly in the four fights dispute, is unsustainable workloads is a student issue. Mass casualisation is a student issue. And if we don’t do something to stop the rot, these things will continue to get worse. It will continue to negatively impact students’ education.

You are engaging in a false binary if you think this is going on strike is hurting students and not going on strike isn’t hurting students. It’s just nowhere near that simple. This is about systemic change and securing the working conditions of people in the sector, so that we don’t keep having to have members of staff who burn out because they’re working too much or we don’t have to members of staff who have to opt out of the pension scheme because they’re only on a nine month contract and they can’t afford to stay in it. We don’t have to have people who train for years to get a PhD and become an academic and are still living in shared housing well into their 30s. It’s so much more complicated and the stakes are so much higher than, is this detrimental in this one circumstance?

Do you accept it might be difficult to see that wider picture for students who are unable to have meetings with a dissertation supervisor, for instance?

Today is a Graduation Day at the University of Birmingham. Ideally it would be a celebration of the achievements of this university’s students. But no amount of education is worth it if it comes at the expense of the staff who make it possible. pic.twitter.com/LZfT4M1HZ3

Some students say, you know, it seems like these strikes make very little difference to unis because they’re getting tuition fees money anyway and so it disproportionately impacts students. What do you make of that?

The strikes are an attempt to actually make changes for staff. That’s the point. Students maybe can envisage a future where staff aren’t as overworked and class sizes aren’t as big and therefore they would have more meaningful relationships with their staff.

There would be huge changes to the students’ experience within the university if staff weren’t totally overworked all the time.

This is maybe the issue that’s concealed, possibly, from students – an uplift and improvement in staff working conditions would be felt immediately by students.

A third year student in their final term might think, oh, this is good, in five years things might be generally better at university. Do you think if you get a significant win of these round of strikes, it will have a benefit to those third year students, right at the end of their degree?

That might not be something that if you’re in your final years you’re very sympathetic to, but at the end of the day, institutions, universities have constructed these working practices. And as a trade union, we have often had our professionalism weaponized against us to try and prevent us from taking the action we need.

We’ve got into a situation now where working conditions that are so disruptive now for staff, that staff have been forced to take action. It’s really unfortunate for students who are going to be impacted by that, but that’s an issue that university leadership teams must account for, because it is them who have constructed and allowed the employment practices that we have to develop.

The Tab has reported that the strikes may stop some students graduating, and that universities are keeping students in the dark over this. What do you think of this?

If universities are seriously concerned that the strike action that we are about to embark on could end up having an impact on students abilities to graduate, that is another example, why they need to take our concerns seriously, and come up with ways to resolve the dispute so that people don’t take strike action.

Nobody who’s involved in teaching students, or taking them through counseling sessions, or providing lab space for them wants to see that happen. But at the same time, the universities only think to sit up and listen when we withdraw our labor, and that’s what we’re doing.

Answers have been edited for length and clarity

Got a story about the strikes? Taking action against your uni? Know something about their hidden impact? Get in touch at [email protected]

• Confirmed: Unis will be hit with two more weeks of strikes

• Wheelchair-using student forced to sit in stairwells during lectures