You’ve spent hours perfecting the application email and days getting your CV up to scratch to ensure rejection is simply not on the cards. You give the email one last read, double-check all your Grammarly corrections, press send and breath a heavy sigh of relief because you know you’ve smashed it.

You get a reply within 10 minutes – weird, but maybe you’re just that employable. Oh god. This can’t be real. How did you fuck up at the last and simplest hurdle? The email reply reads: “Hello. You attached a Jamie Oliver for Chilli Beef Recipe not your CV”. FUCK. 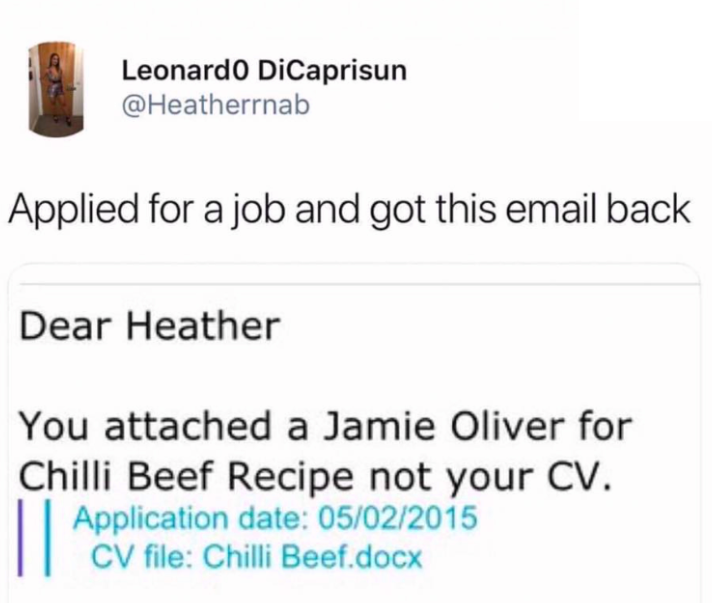 This seems like an obvious mistake to avoid. Isn’t the name of the attachment file the final thing everyone checks before sending an email to a future employer? Apparently not. We spoke to someone who worked at a university clearance office and asked them what the weirdest, funniest and most embarrassing things desperately panicked students have sent instead of their CVs. This is what we got:

The background story is that this guy had taken a nude and sent it through his laptop to his girlfriend. The picture saved on his desktop, the same place his CV was saved. It’s everyone’s worst nightmare – you haven’t even spoken to your employer and they’ve already seen your penis.

The response the student got is probably the best part. Fearing that she was going to get in trouble for having pornography of an 18-year-old on her laptop, the woman replied: “Just to let you know that there was another photo attachment in your email which I’m assuming you did not mean to send. I will delete the email now”. Didn’t even ask for the actual CV, gutted.

Pictures from their 18th birthday party

One student accidentally sent a whole file filled with pictures from her 18th birthday party. The student was deeply embarrassed and apologetic, but apparently the pics were all pretty wholesome and endearing – just 23 pictures of boys and girls drinking VK and sticking their tongues out.

Not only did they send an attachment of a death certificate to a stranger, but it was their family member’s death certificate who had died a few months prior. They didn’t realise their mistake, so the person at the clearance office had to reply, explain what had actually been sent and ask for the right documents.

The email read: “Dear Applicant, Thank you for your email and documentation. Unfortunately, we still require further relevant documentation. A death certificate, relating to your deceased family member, does not meet these requirements. If you require any additional assistance, please reply to this email. Kind regards, university team.”

Apparently her response was blunt but like fair enough, someone’s recently died and you’ve been put through clearing. Enough’s enough.

Not exactly embarrassing but just random and funny. Who actually saves a document of their mobile phone contract onto their computer? And then keeps it in the same important file they keep their CV?

The people at the clearance office had no idea what A-Levels the student did or if they’d received their Bronze Duke of Edinburgh award, but they did know that she got an incredible deal on her iPhone 8.

Letters from someone in prison

Attached to their application email was a letter sent from someone in prison. The person at the clearance office didn’t read it because it felt “inappropriate” and he was worried he might read something that would eventually get him involved in a future court case.

Their new meal plan for the week

This student was on their way to a better them and accidentally shared her new meal plan with a number of employers. Apparently it was really detailed. Breakfast, lunch and dinner, with a snack in between. Her morning walk – three times a week. When to weigh in.

One response admitted that he was so impressed with her meticulous detail, he was tempted to save it and use it himself. Another commented on her choice of Tuesday and Saturday dinner – “Oh! Chilli twice a week. Wow.”

Incriminating pictures of her and her mates at a festival

You don’t EVER post pictures of yourself completely wrecked at 5am in the dance tent of a festival just in case future employers find them. Instead, you accidentally send them directly in an email which was meant to sell you as the perfect employee.

Apparently, the student made a big Word document of the worst pics of her and her friend at their most fucked up because it was meant to be a joke for their birthday. To her potential employer, it just looks like she loves drugs so much she puts together A4 collages of her doing them.

The response she received was surprisingly understanding, almost too understanding – she just said “Hey, don’t worry! I too was young once”. Nice.