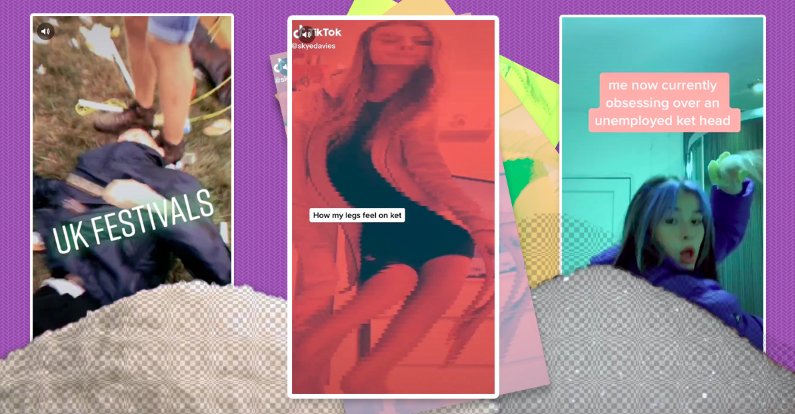 Time to check in on the teens aaaand they’re doing jokes about ket on TikTok. Not content with perfectly acting out Gavin and Stacey scenes they’re a decade too young to have been around for, they’ve adopted the wonk-inducing horse tranquiliser as a powerful cultural signifier.

The #ket page on the app has over 17m views, but it’s not without controversy. Sky News said “TikTok has a ketamine problem”, decrying the fact that “videos featuring the illegal party drug ketamine are going viral on TikTok, exposing children to material celebrating and promoting drug use.”

TikTok say it’s hard to block the ket hashtag like they do for other drugs – apparently “ket” might mean different things in different languages.

Anyway, it’s actually kind of funny. But the world of #ket is multifaceted.

In one incarnation, it lives as a general hashtag representing not the itself, but projecting its effects onto the human condition: the slightly disorientating reality of living in a society, and the distinctively grotty, often slightly unsatisfying, taste British life delivers.

Take this as a first example – the pang you feel when the person you’re into is just a massive kethead.

Ket is almost a cry for help, a “lolsorandom” identity marker.

In other guises, however, the hashtag moves closer to the literal. #ket is at its funniest when pointing you towards messy festival videos.

Now we don’t know whether these two are on ket. But we can guess.

For any Brit, there’s one person in the friendship group these videos make us think of.

Beyond the two trends which really speak to British culture, we have straight up references to drug use. These are slightly worrying, but given they’re not doing ket in the videos, it might all be bluster.

“How I feel on ket” goes through the stages of using the illegal drug.

What can we learn from this? What do the accumulated 17 million views mean for us as a society?

It’s hard to know. Maybe the feral teens of TikTok like ket, or maybe they’re just lying about it to look cool. But beyond that, there’s the inescapable feeling that ket is so culturally pervasive it’s become shorthand for wacky but grim times.

Sure, there’s a bit of delighting in other people’s mild embarrassment. This is probably a good time to say ketamine is illegal and will also fuck your body up quite quickly, so maybe give it a miss.

• It’s official: These are the drug capitals of the UK