Your meal deal is basically a window into your very soul, and in today’s economic climate it probably accounts for about 50 per cent of your entire diet. You could ask about it on a first date and justifiably end it prematurely based on the answer – it’s that important.

Knowing this is the case, how can we apply to this to the cast of winter Love Island, who quite obviously have no souls? Well, we can only do our best to piece together what kind of meal deals they subscribe to based on the woodchippings of personality we’ve seen so far, but we’ve managed it.

Anyway, strap in and grab a cuppa for this, because it is truly is the best thing you’ll read all day – the winter Love Islanders as meal deals. Here we fucking go: 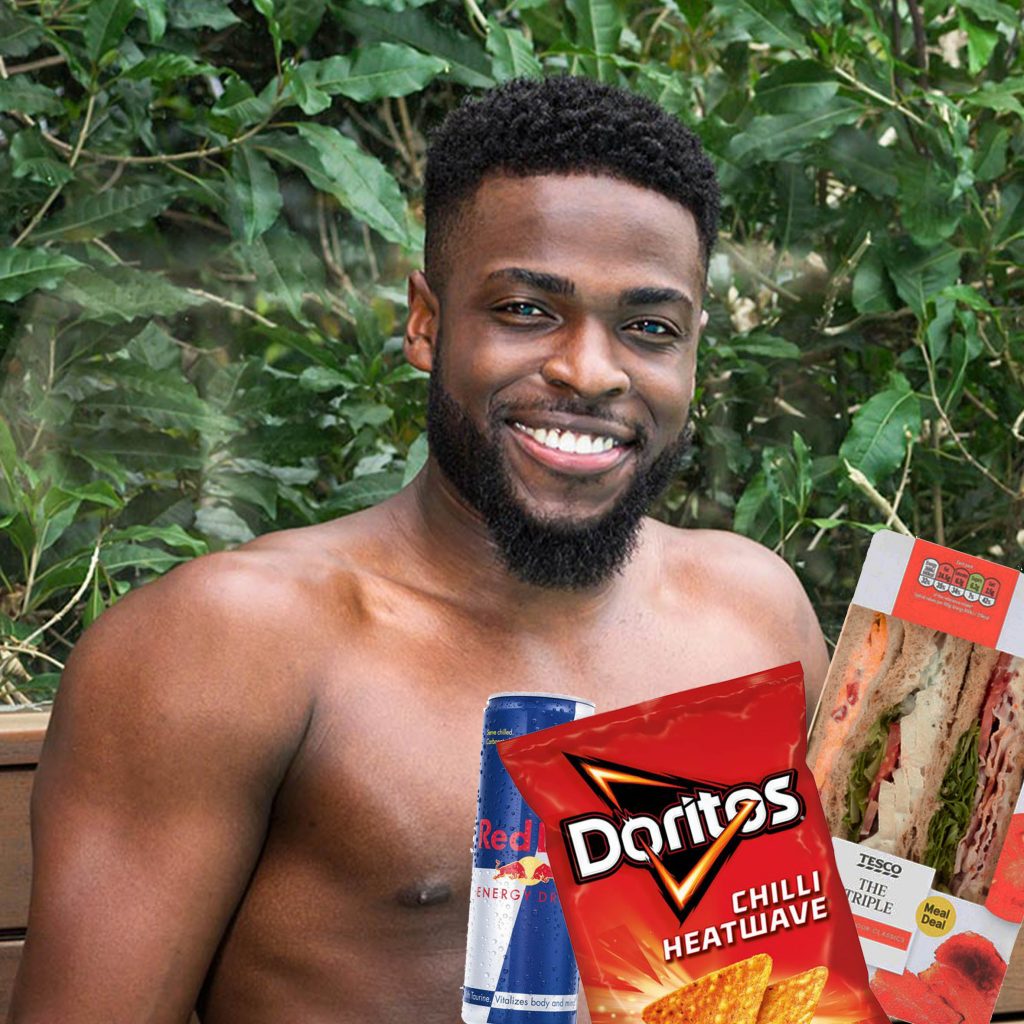 Mike’s not here to fuck about. If he’s spending £3 in Tesco he’s gonna maximise the energy per gram of munch. For this reason, he’s getting the meatiest triply-est sandwich on offer, and bolting it down with a Red Bull and tangy Doritos (no dip, obviously – he hits them raw).

Why does Mike need to be buzzing off his tits on calories and caffeine? Well, how else will he be able to stick his nose in everyone’s business? The man is quite clearly a nosey machine and he needs his fuel. 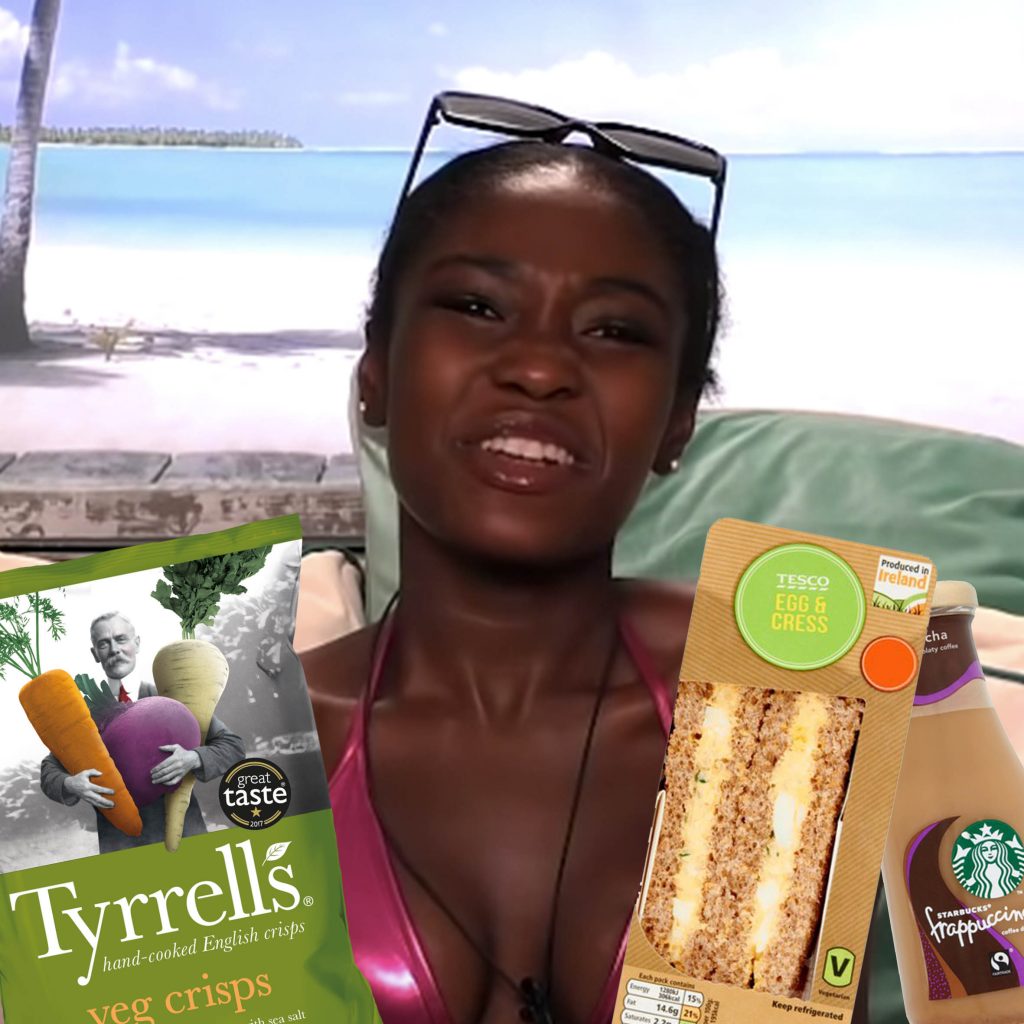 There are two versions of Leanne: One of them is quiet and collected, the other (the one we see on Unseen Bits) is hilarious. To reflect this, most of her ideal meal deal is a sensible one. The regular Leanne shies away from the nastier options, but the hidden wild Leanne lets herself have an iced coffee to ensure she can take massive dumps. 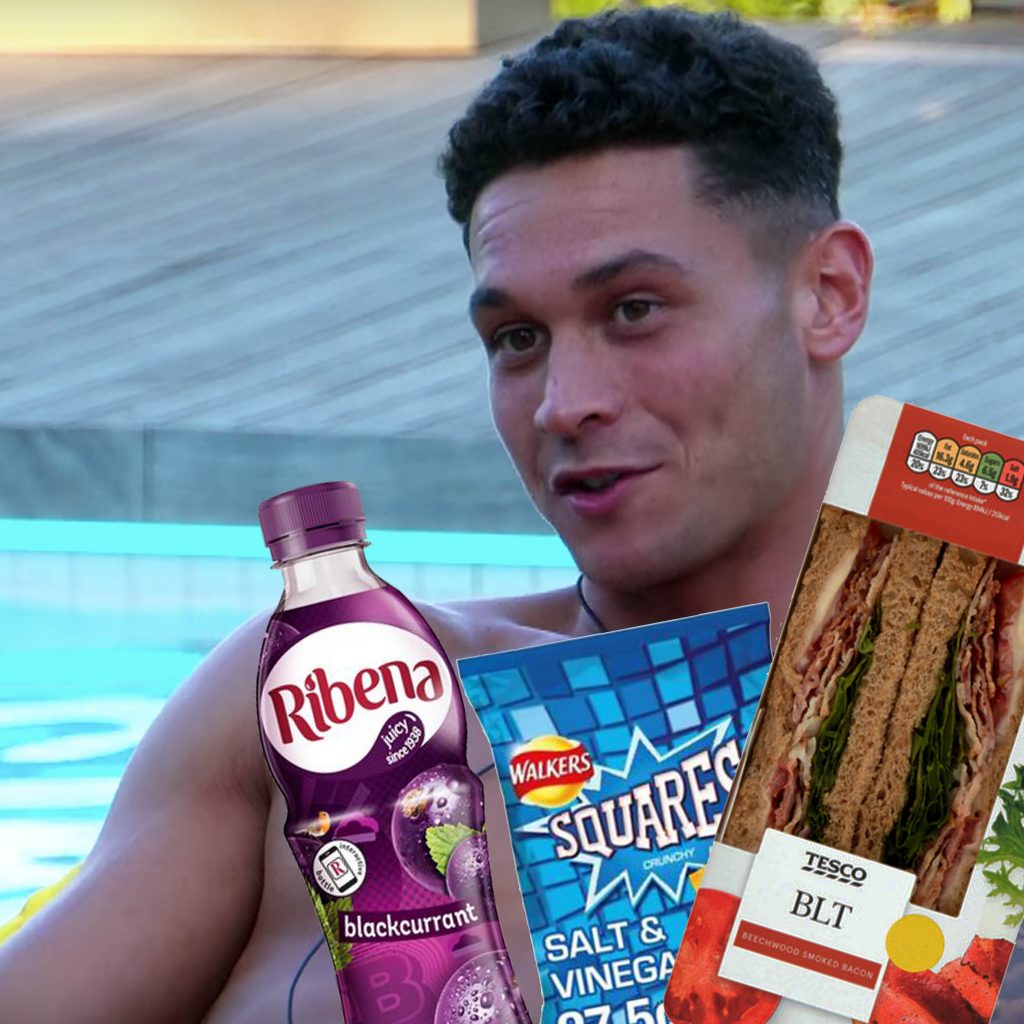 Callum is boring as fuck. You know it. I know it. Everybody knows it. Let’s not deny this man has been eating BLTs since he was like five. The villa’s resident baby boi is probably only allowed Ribena by Shaughna as a special treat if he’s been good and used full sentences that day. 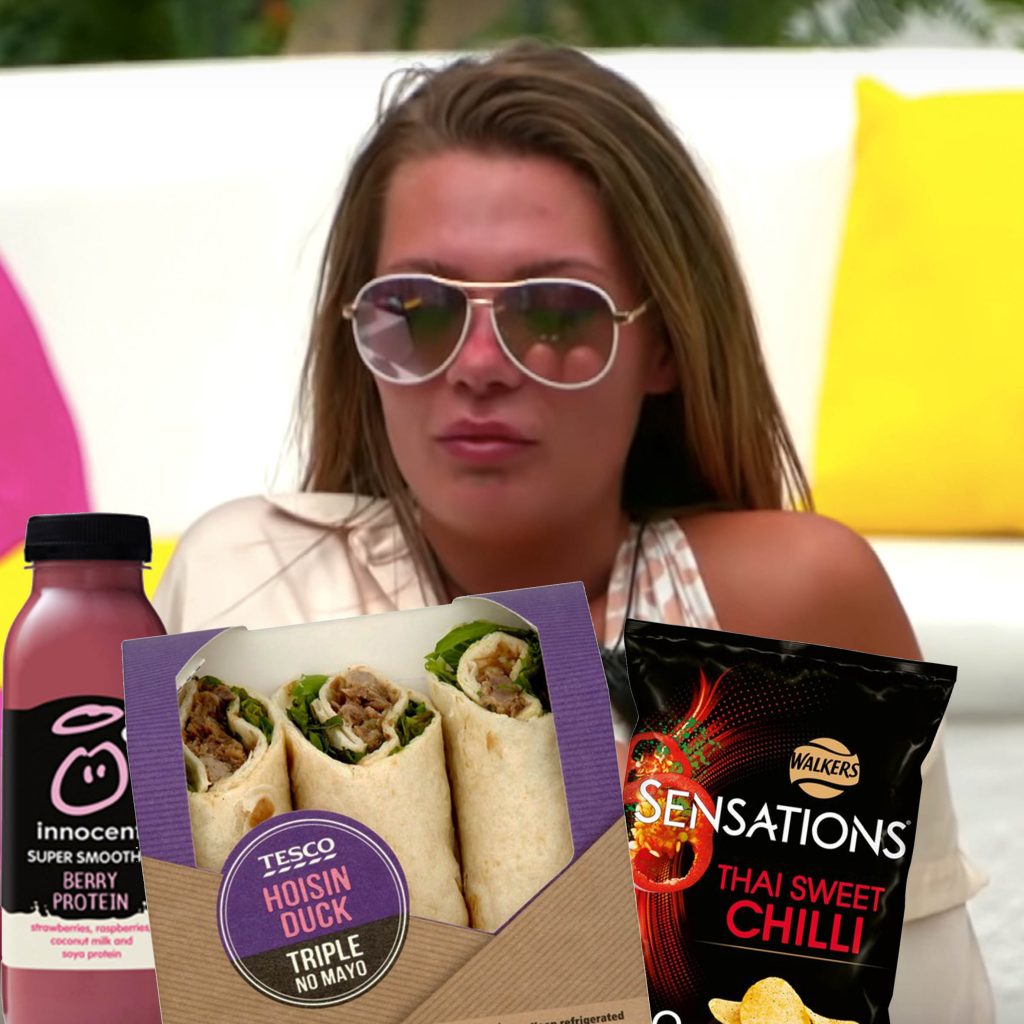 Shaughna is the best Islander and this is an undeniable fact. Similarly, Hoisin Duck wraps are the best item on the meal deal menu, nay any menu in the world. They are made for each other. Shaughna doesn’t care that Sensations make your breath pong and your fingers sticky, and she’ll wash it down with her Innocent smoothie because she wants her money’s worth.

Connor: Chicken mayo, a bar of Galaxy, and a coke 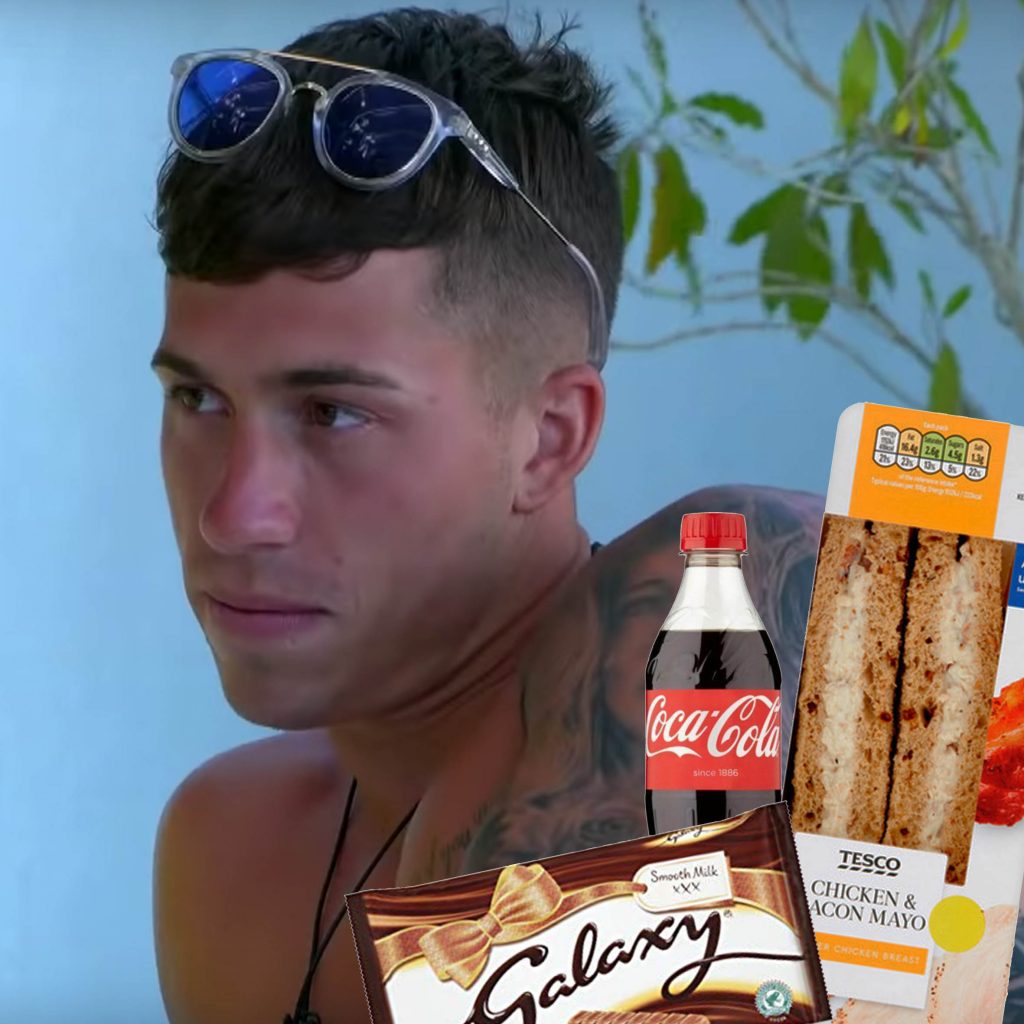 You know when you’re picking what you’re going to grab from the Meal Deal shelf and you have a moment of health consciousness? Connor has never felt that because his rock solid veneers don’t feel the effect of sugar. The coke would run off his teeth like those viral videos of white shoes that never stain.

Sophie: Cheese and tomato pasta salad, Sunbites, and a milkshake 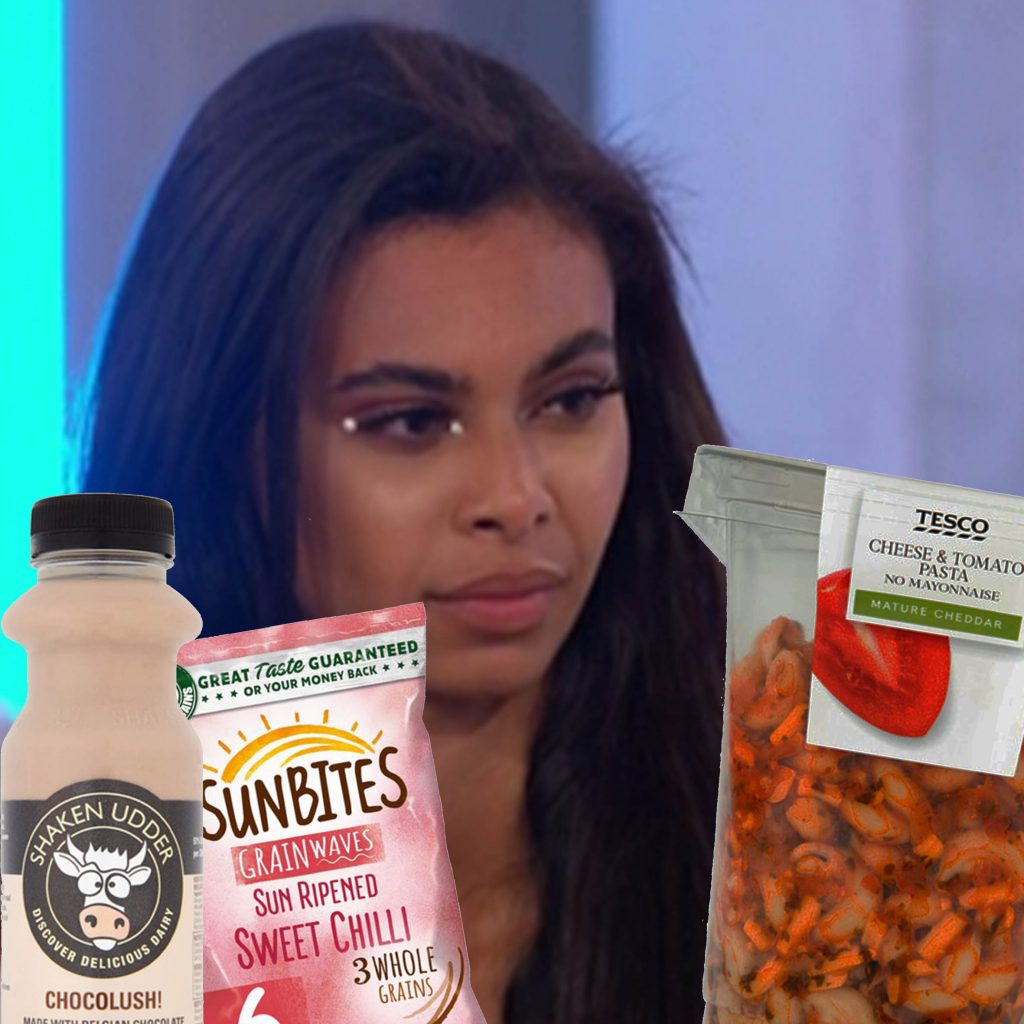 Let’s be real you can’t cultivate dimples like Sophie’s without sacrificing the less healthy elements of the Meal Deal and Sophie knows this which is why she has Sophie’s dimples. Soph treats her self to the milkshake a) because she knows how to live and b) because it’s easily the best value-for-money beverage on the menu. Be more like Sophie.

Connagh: Ham and cheese sandwich, Quavers, and a bottle of still water 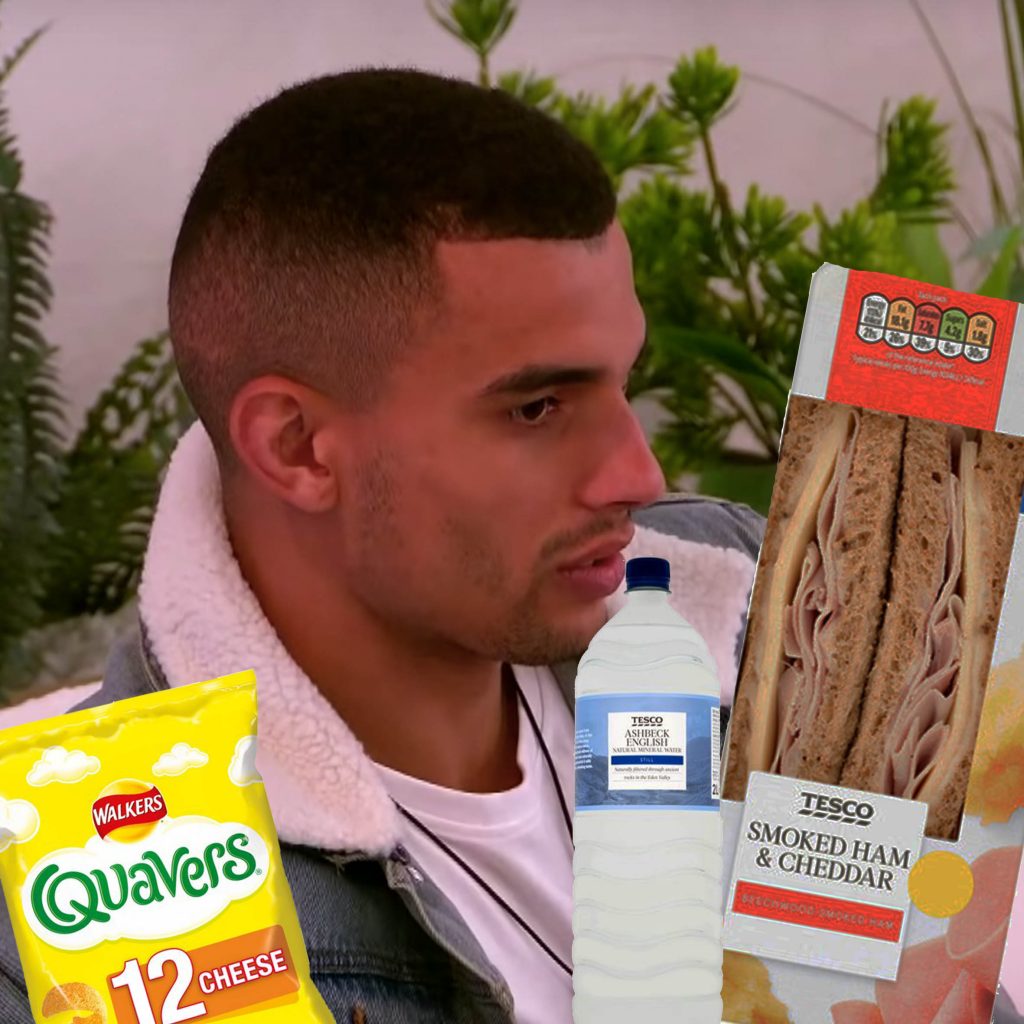 I’m pretty sure Connagh-with-a-G had a lot of screentime last night but CHRIST is he dull. Like Sophie, he realises you can’t become the size of a house if you’re smashing Sprite and Fanta for lunch, so his set maximises carbohydrate and whatever other chemical is in food that suppresses any sort of personality. 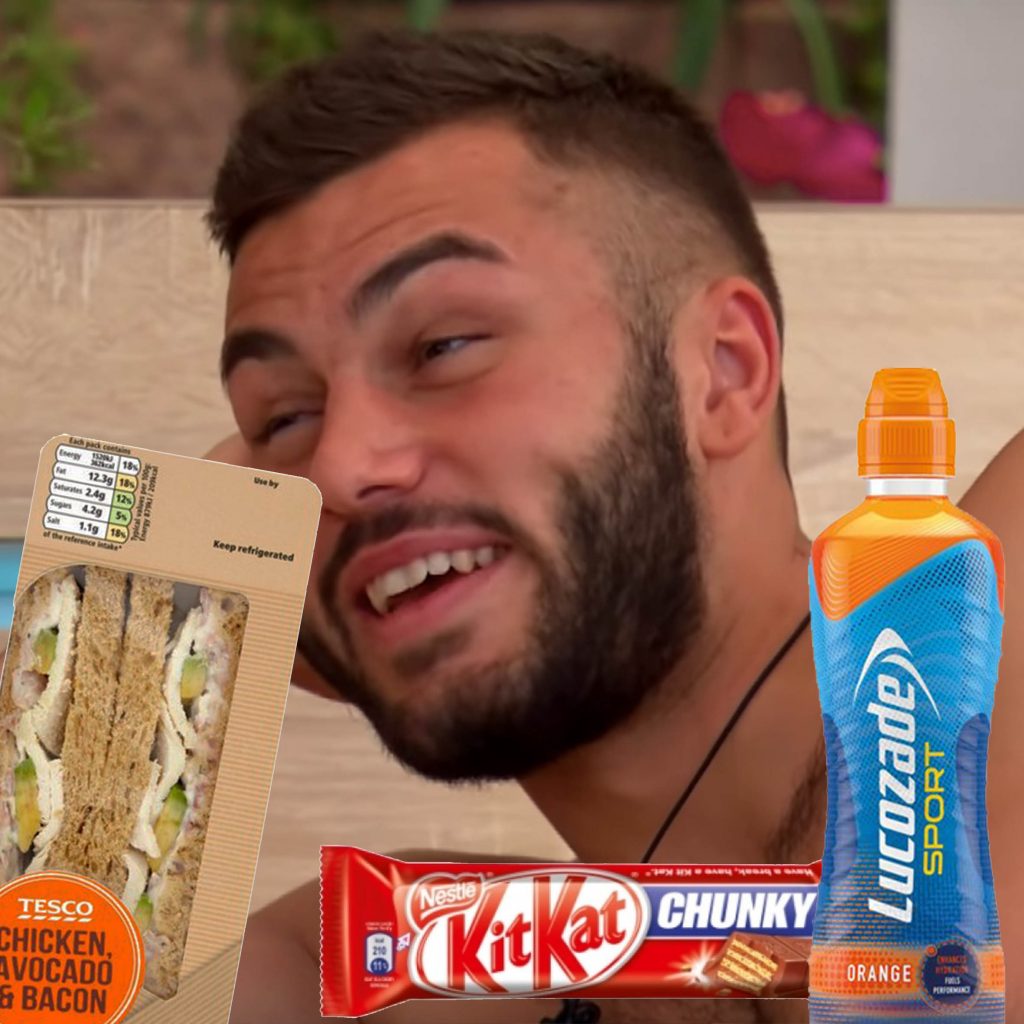 Look if you like ’em chonky then you’ll like Finn, who at 20 years old is unreasonably big. To become the chonk you must consume the chonk – and a KitKat chunky is the key ingredient. The Lucozade and sandwich merely provide him with the protein and sugar to pin you down so he can suck your toes. Yum. 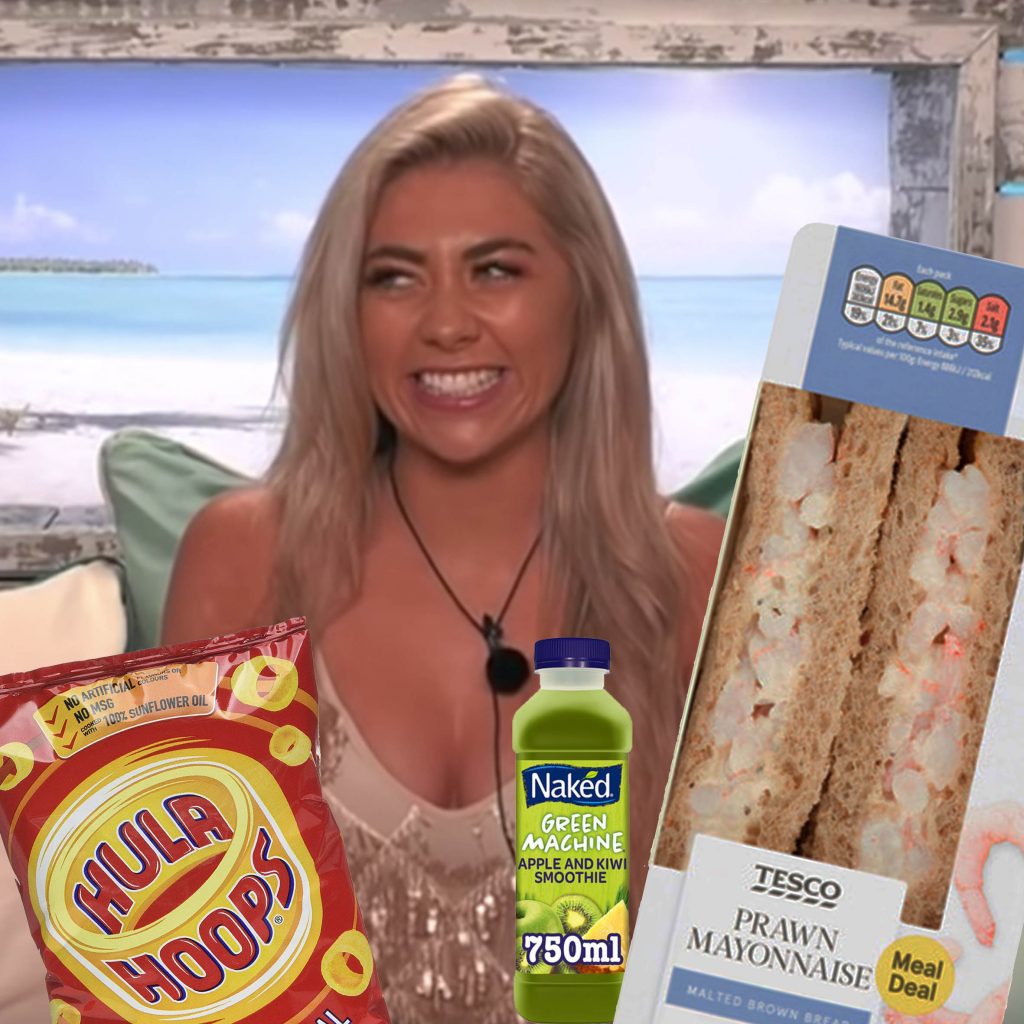 Paige makes calculated choices. She immediately placed herself at the centre of attention by overegging her role in Lewis Capaldi’s mega-hit “Someone You Loved” (which BY THE WAY about five people wrote so it’s definitely not about her), but then she backpedalled before the story got annoying. She’s since emerged as one of the funnier, more switched-on Islanders, and may well end up winning. Her meal deal choice reflects this cleverness: You get a lot of bang for your buck in a packet of Hula Hoops, and prawns are low-key a massive vibe. Watch out for Paige. 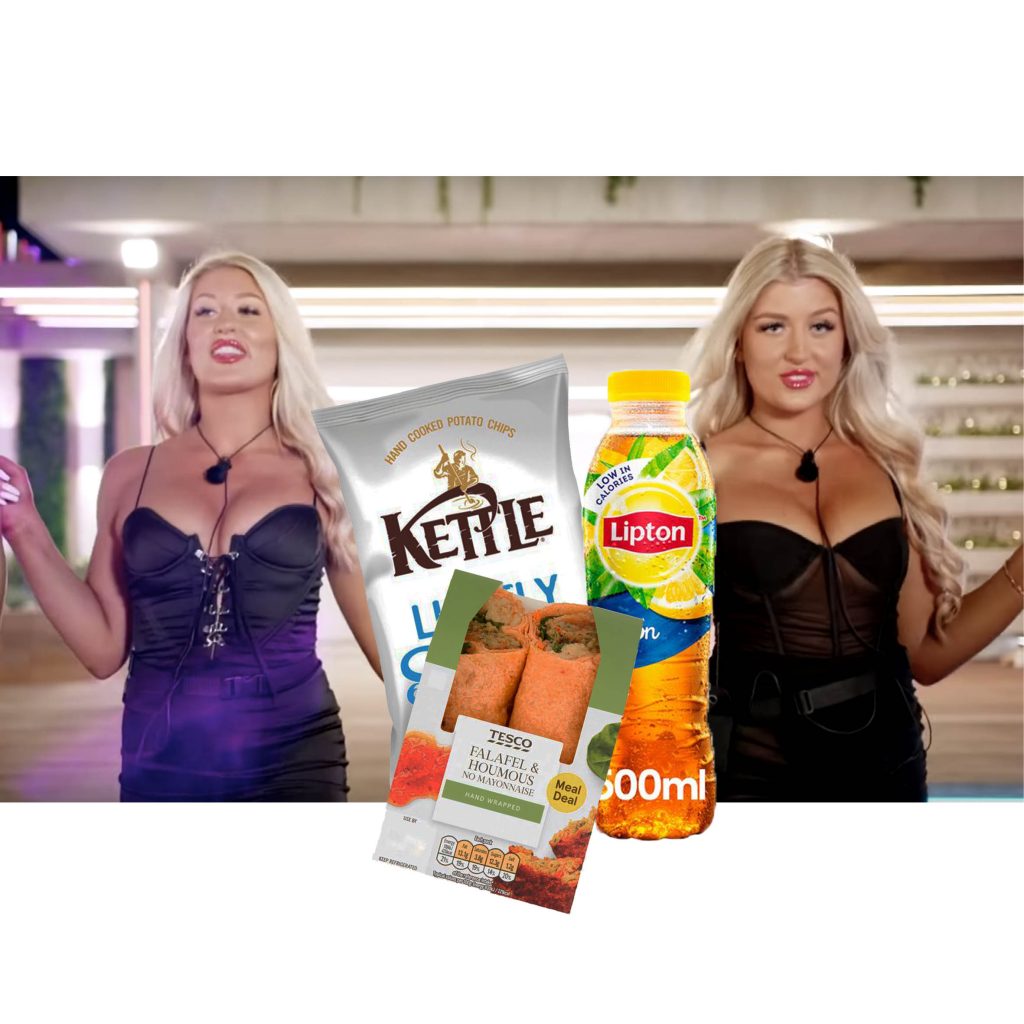 Picture in your mind: The Twins hit up Tesco and are ready for their lunch. Holding hands and moving in total synchronisation, they pick out slight variations of the same set: Jess has the balsamic Kettle Chips, Eve has balsamic. Jess gets Peach iced tea, and Eve gets Lemon. They both get the same wrap because anything different would be a little too much. 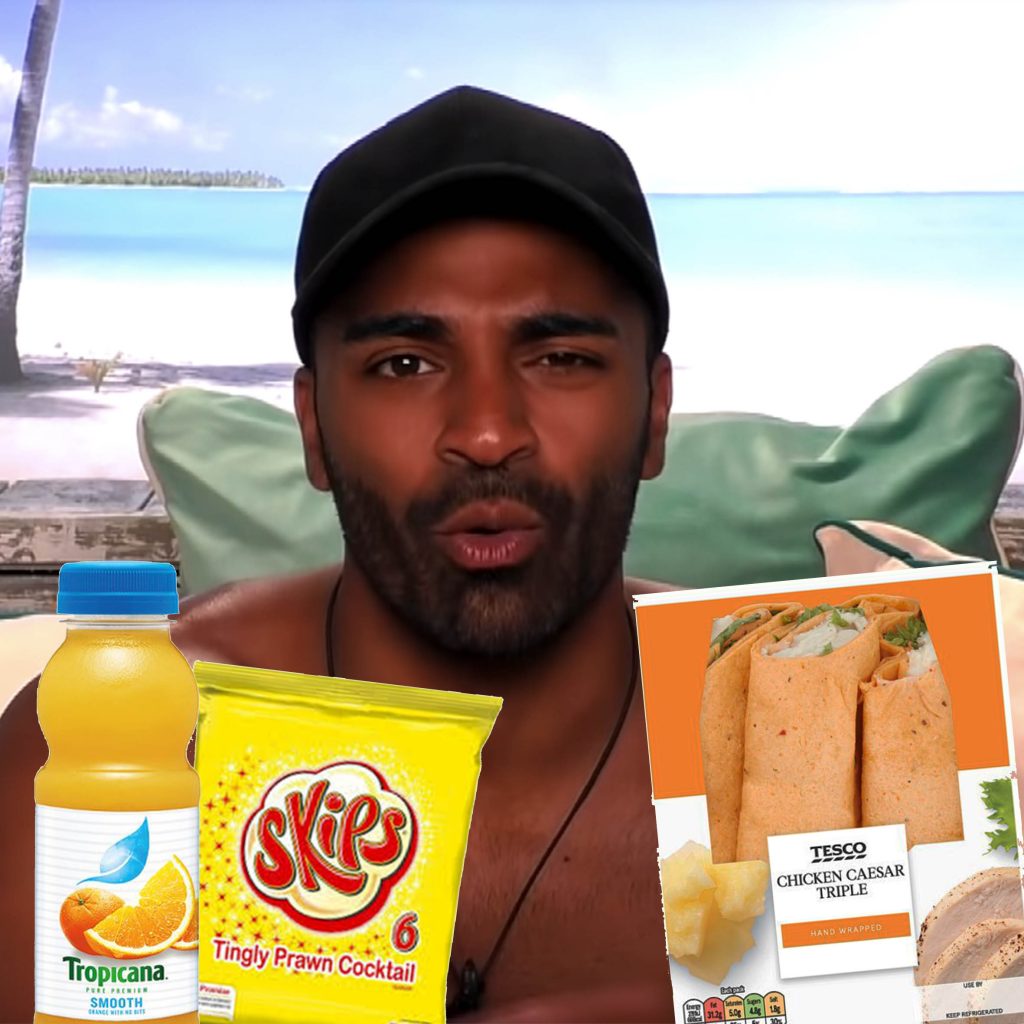 Just look at these options. It’s like… sure I could go for a chicken caesar wrap, but, like, I would just rather not, you know? Nas epitomises the tragic left-behinds of the Meal Deal line-up. Those lunch items you would enjoy if they were right in front of you, or you didn’t have to pay for them, but not enough to choose them over something better. Also, people who eat skips are total beta males and if you believe otherwise you are probably some sort of nerd. 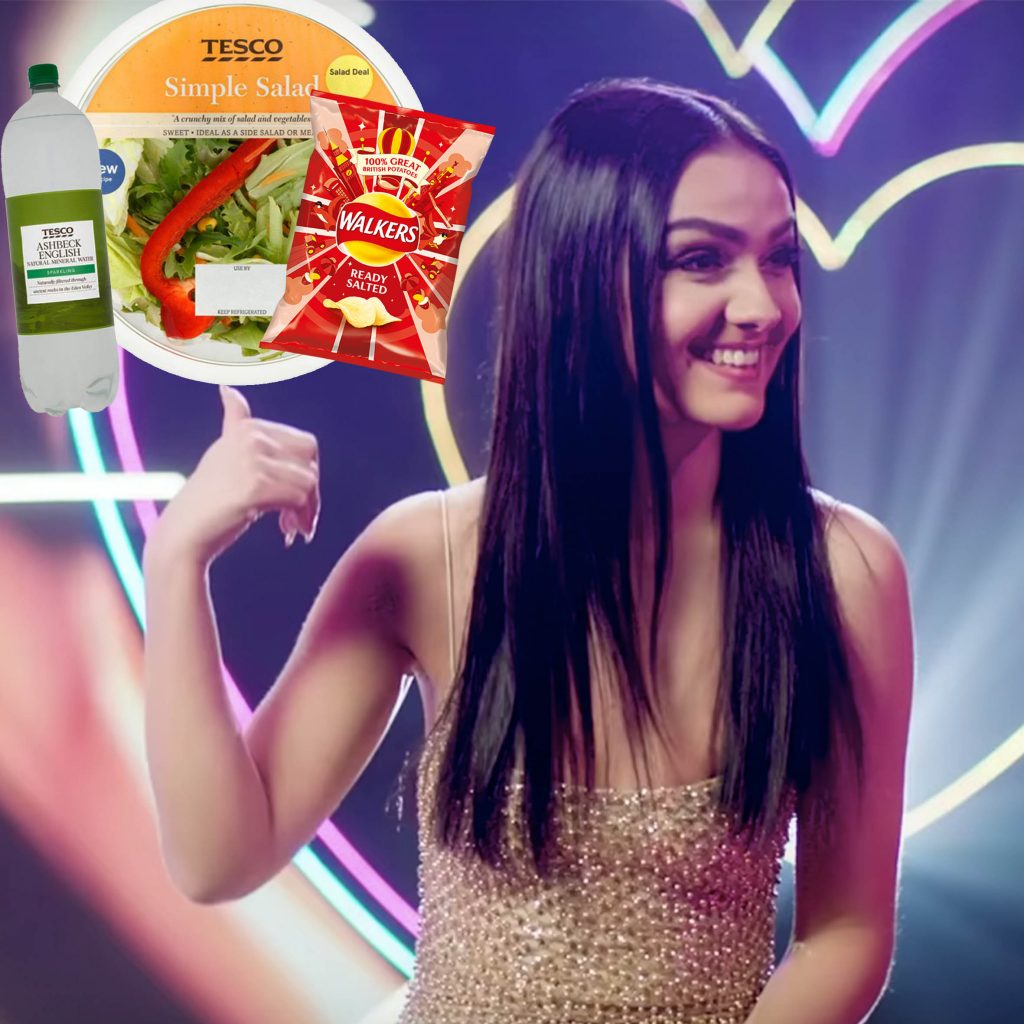 Siânnise brings absolutely nothing to the table, does she? She didn’t even have the sense to strike up a friendship couple with Nas even though everyone loves him. A lucky few from this cast will one day get to be PLT brand faces, but Siânnise? She’ll be miserably picking at her Tesco salad in a matter of months.