Neal told LADbible he has cleaned up after every single death scenario imaginable. He said: “I’ve been to jobs where people have been locked up and tortured, someone else jumped into a wood-chipper. I’ve seen suicides, homicides, death with shot guns, poison… you name it.”

In his interesting career path Neal has seen hoarders, meth labs and most surprisingly a dead whale.

Obvs this isn’t Neal Smither, it’s Joe Goldberg, but this is probs how Neal picks up phones too via Netflix

“I started to research and look into the service itself, and I found it didn’t exist. So, I decided to get a business licence and start up a company.”

He didn’t get any clean up jobs until a year after setting up the business and his first clean was a woman’s house after she died by suicide.

Neal has said the trauma and mess don’t bother him and has likened it to working in McDonalds. He said: “I think, luckily for me, I’m just not bothered by it. I see messes and I might go ‘ew’ but they don’t bother me to the extent where I can’t do it. It’s a mess; it’s there. I get it done.

“It’s never been traumatic for me, ever, and it still isn’t. For me, I get there and it’s a service. It’s just like McDonald’s – the guy making the burgers, he doesn’t see that burger anymore because he’s done it 10,000 times. He’s just making it and not thinking about it and it’s the same thing for me.”

Yeah flipping burgers and cleaning up after someone has jumped into a wood chipper are exactly the same.

Neal has also said his work is essentially being a janitor as his team are not involved with any investigations and they are there simply to clean up.

He said: “It’s not romantic. It’s not investigation. The blood and the crime, that’s the least of it. It’s very physically demanding. It’s manual labour. We’re janitors.

“There’s no difference in our service than the guy who is at the train station mopping the floors. We’re just mopping up something that is quite unique and happens in a certain situation.”

Again Joe Goldberg from You, not Neal Smither, via Netflix

He’s very vague about exact details of the crimes

Although he’s cleaned up loads of crime scenes Neal has said they all just blur into one: “I don’t remember them as each distinct job, it’s almost just like one big job. I will remember something here and there, but I couldn’t give specific particulars, because I would mix it up with another job and think they were the same.

When it’s raining they have less business

According to Neal there can be a slow work spell when it rains because people don’t go out and so when the weather improves they go to check on relatives and discover they’re dead.

The crime scene cleaners have an Instagram account showcasing before and after pics of crime scenes. Neal doesn’t share much detail of the crime so people are left to theorise about what went down at the scene.

And it not surprisingly has attracted a lot of weirdos, Neal said: “It’s a pretty big following for what we do – I’m surprised by it

“I did it just to show people what I do and just keep it kind of vague, because not many people know about the job. It really just caught on and got much bigger than I anticipated.”

They also have a website called ‘pray for death’ where they sell merch. You can get a crime scene cleaner t-shirt for $13. 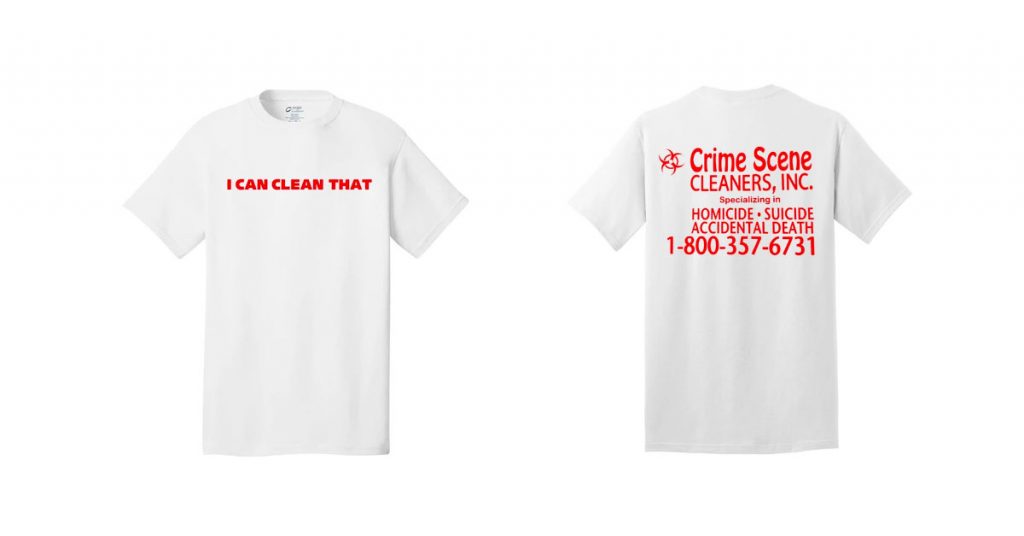