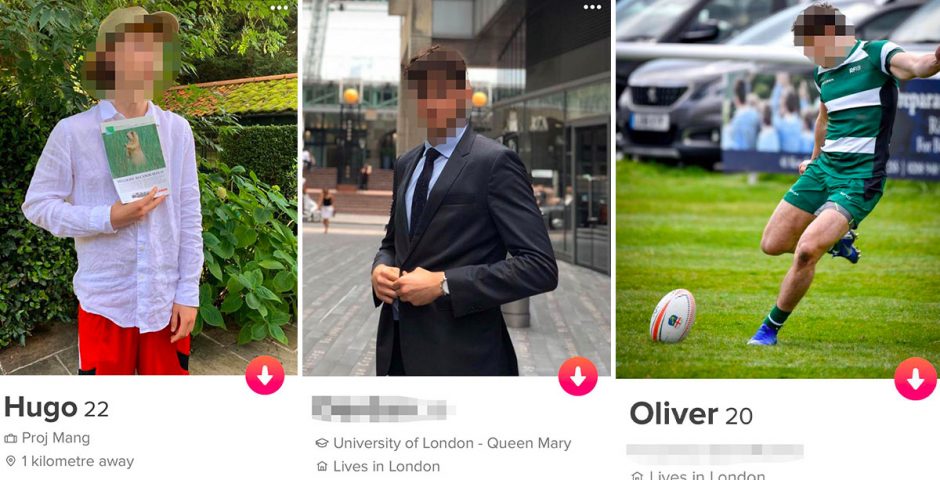 Exactly how he will have sex with you, according to his Tinder bio

Boys who love travelling will not go down on you

Everyone on Tinder wants to fuck. But how exactly they fuck is another matter entirely and can be accurately predicted from their bio. His bio will also crucially tell you whether he is even worth fucking at all. In those precious 500 characters or less you will know whether he: is prepared to go down you, is terrified of boobs, will only fuck you in doggy and whether he will always come first.

You would think, that in the year of our Lord 2020, boys would have stopped posing with fish and would have learned how to sell themselves properly on Tinder by now. But we move, and here is exactly how he will behave in bed, according to what’s in his bio.

For more judging boys on their sexual performance listen to our sex podcast “Is it in Yet?”, on Apple podcasts or Spotify.

Or you can listen to the first dates episode right now in the player below.

What his bio says: It’s just a Spotify song and it’s Bicep, Glue. 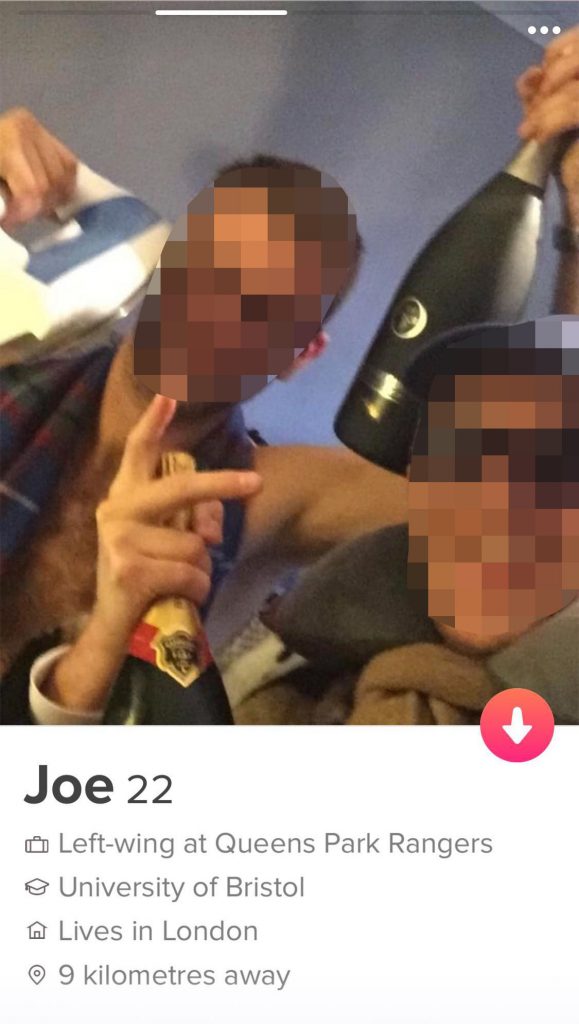 What he’s like in bed: Makes you do all the work, if he can even get his dick up in the first place. Doesn’t wanna wear on condom because it doesn’t feel as good. 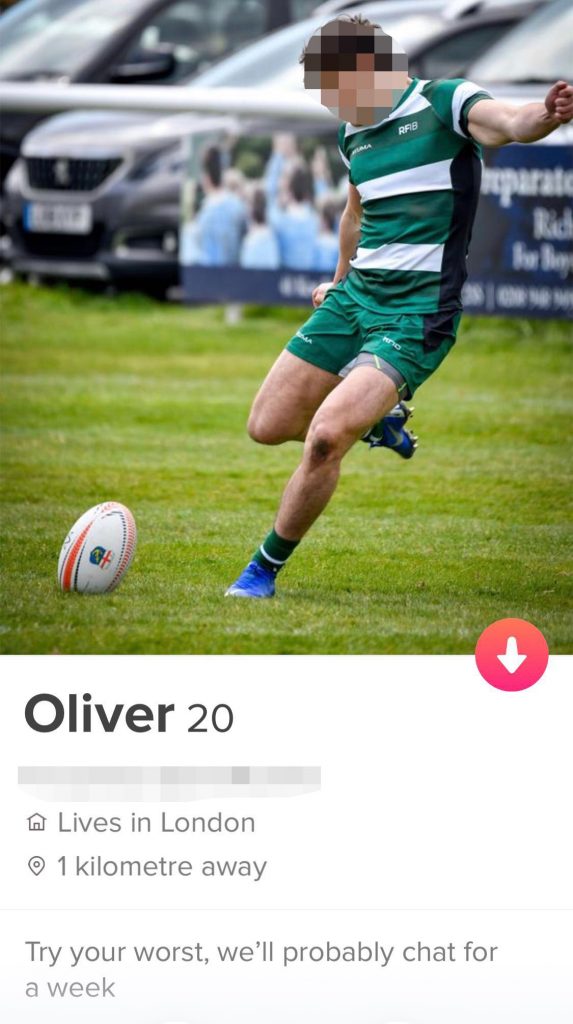 What he’s like in bed: Sex just kinda happens to rugby boys so they’ve never learned how to get good at it. Contrary to popular belief there will be very little “throwing you around” and mostly just aggressive doggy. Will go down on you for the clout (he knows you’ll tell your friends) but has terrible technique and moves his tongue up and down very quickly. He’s not committed enough to make you come from it. Tries to put it in your bum without asking first. At least you got to grip onto those shoulders. 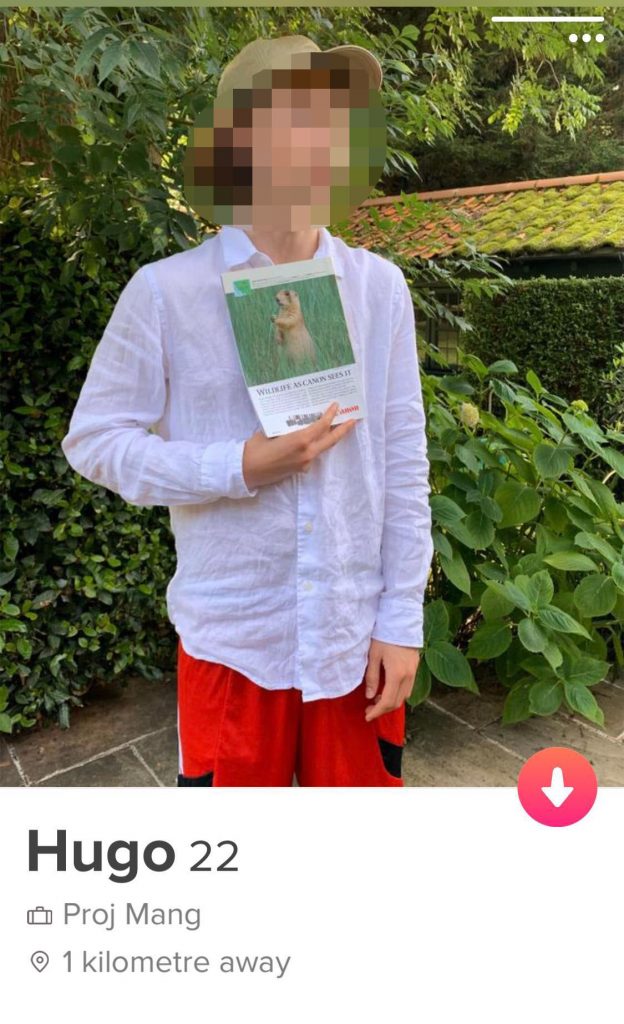 What he’s like in bed: Goes down on you for a long time, maybe a little too long. Likes a finger up the bum and is happy to admit it. Loves eye contact. Will fuck you on your period and maybe even prefers it? Pulls your hair just the right amount. All in all, a really good time until he cries about his “big ex” in the morning. See beam me up softboi.

What his bio says:  “53 countries and counting ? Live life to the full. Always up for laugh. Don’t take life too seriously! Looking for someone to travel with✌️” 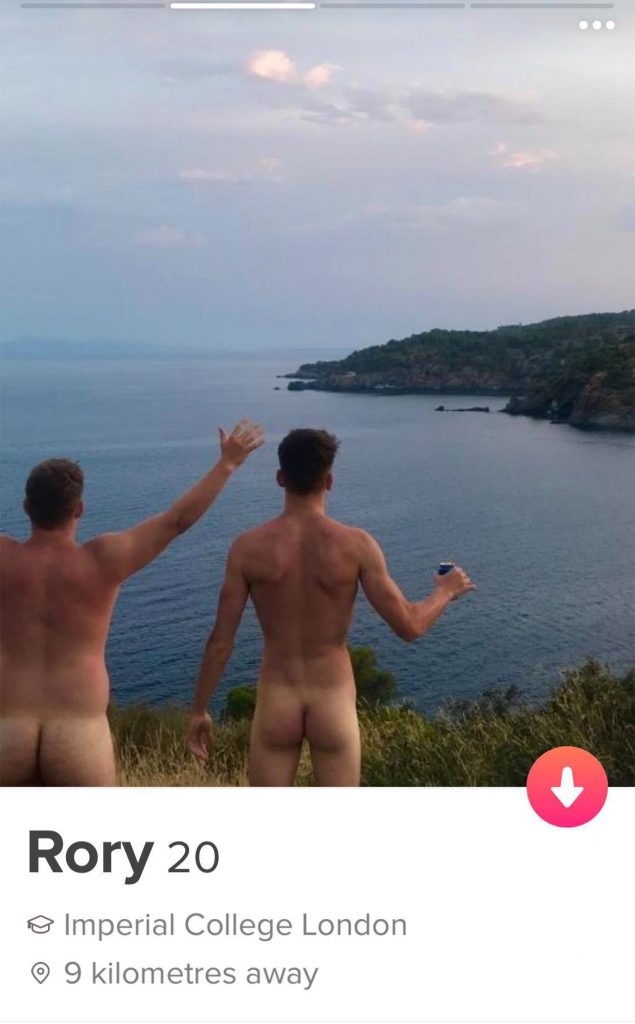 What he’s like in bed: Claims to be “free spirited” and gets his bum out on top of mountains so you’d expect him to be at least a bit adventurous in bed. He’s been to India enough to own a copy of the Kama Sutra. The reality is he won’t go down on you, won’t last more than 5 minutes and won’t text you back. He’s all about speed and efficiency and there will be no morning sex.

What his bio says: “Oasis/Kasabian/Artic Monkeys. R U Mine?” 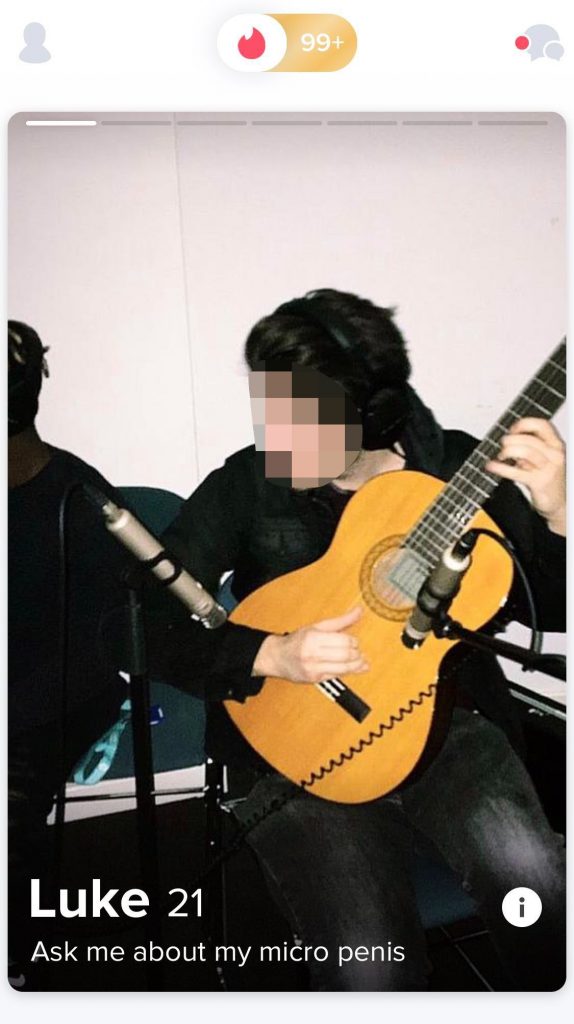 What he’s like in bed: Fucks how you would expect someone who thinks it’s 2008 to fuck. It will be like sex in sixth form. He’ll be wearing Next boxers. He will put a playlist on. Afterwards you will smoke a cigarette while he talks you through the posters on his the wall. He’s very happy he’s had sex as he’s not the sort of boy who goes out looking for it. He makes you a lovely cup of tea in morning, almost as a thank you for pulling him out of his dry spell. You’re definitely not going back.

What his bio says: “Not on here a lot, soz” or [insert some bullshit and ironic reason that makes him look like he’s not desperate to fill the void when deep down he just wants to be loved like the rest of us.] 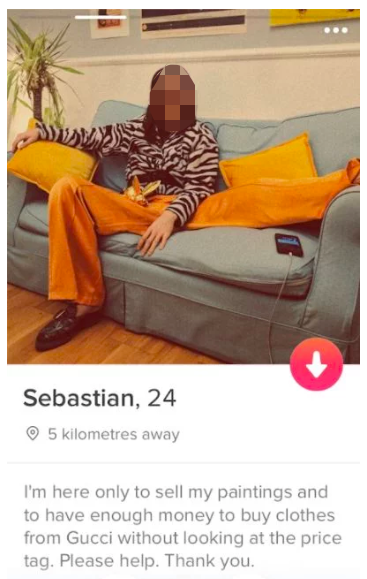 What he’s like in bed: Wants to talk and “get to know you on the inside” first. Will spend time admiring and talking about your pubic hair. Has a well thought out sex persona that fully inhibits him the moment he closes the bedroom door. This character is very well rehearsed. He has sex slow and strategically, nursing it like a fine wine. He will be respectful at first but flick his switch and he will treat you like trash. Can tie you up in his bed restraints with military precision in mere minutes. Has a neatly organised box of sex toys beneath his bed. Is curious about feet.

What his bio says: “INSERT HOME COUNTY/UNI TOWN. Old [INSERT SCHOOL-IAN]. Looking for someone to go on country walks and drink red wine at the pub with.”

"Boozy Brunch is the opiate of the masses." Jeremy Corbyn, 2017

What his bio says: A peep show quote or obscure childhood award. 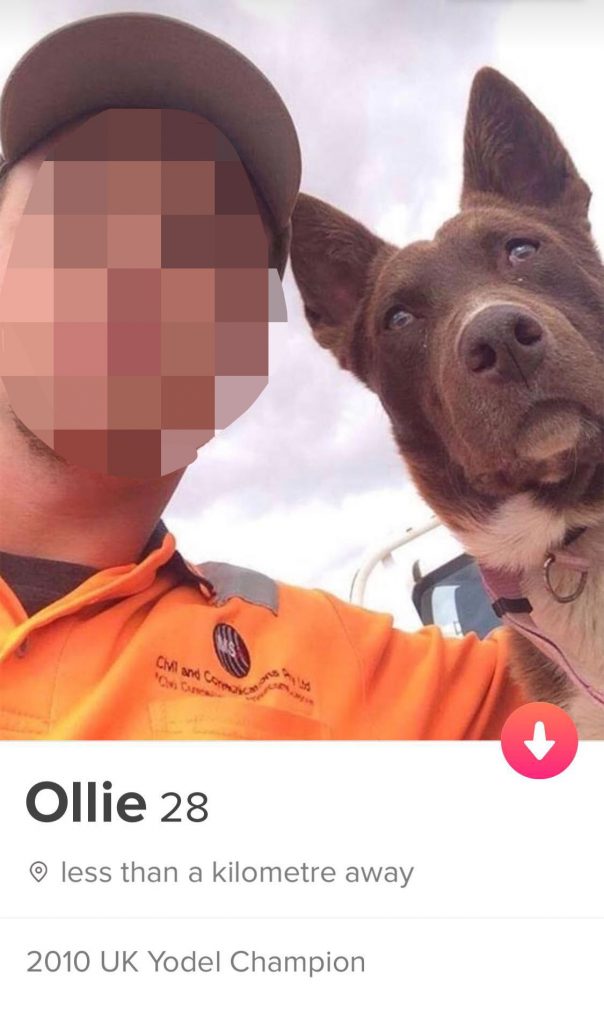 What he’s like in bed: This man is emotionally unavailable and the sex is true to form. High fives you at the end. Rolls over and tells you it was 10/10.

What his bio says: “Applications now open for little spoon” or “need someone to take to my sister’s wedding.” Mentions The Office (US) or Brooklyn 99. Louis Theroux. And pizza. 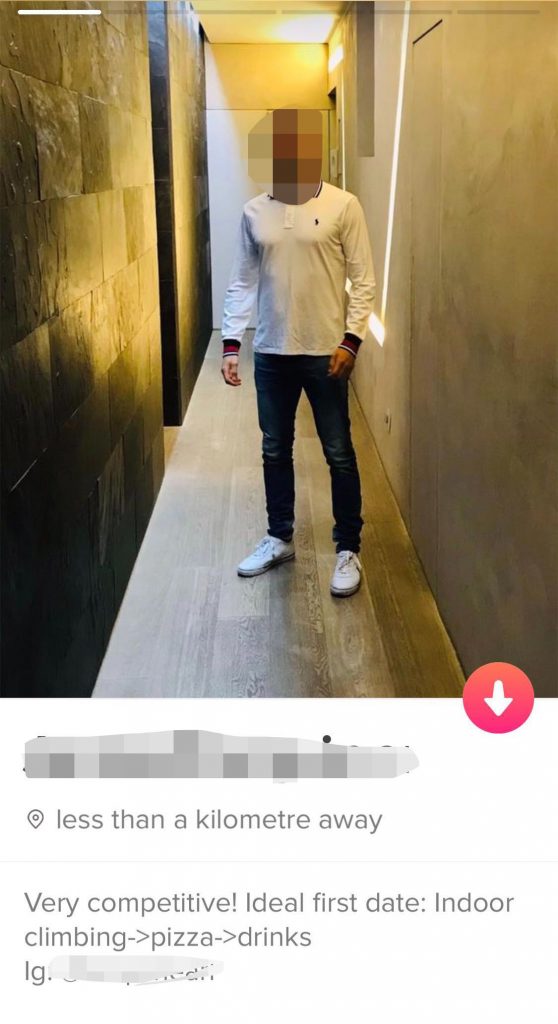 What he’s like in bed: Have you ever looked at a distinctly average boy with a very attractive girl and thought – how does he do it? I’ll tell you how: unlike most men, he actually tries. Average men know they’ve got something to make up for, and for this reason are objectively great in bed. He has a name like Ryan, Kieran, Jonny, Sean, Andy, Lee, or Dan but get him in the bedroom and he’s another person entirely. This man will devour you. He eats you out as if you’re a delicious strawberry ice cream on a hot summer’s day. He will shag you in his car, in a nightclub, where-ever you damn well please. You always come first. You will be back. Do not under estimate this king.

What his bio says: “Looking for a partner in crime. Gives great cuddles.” 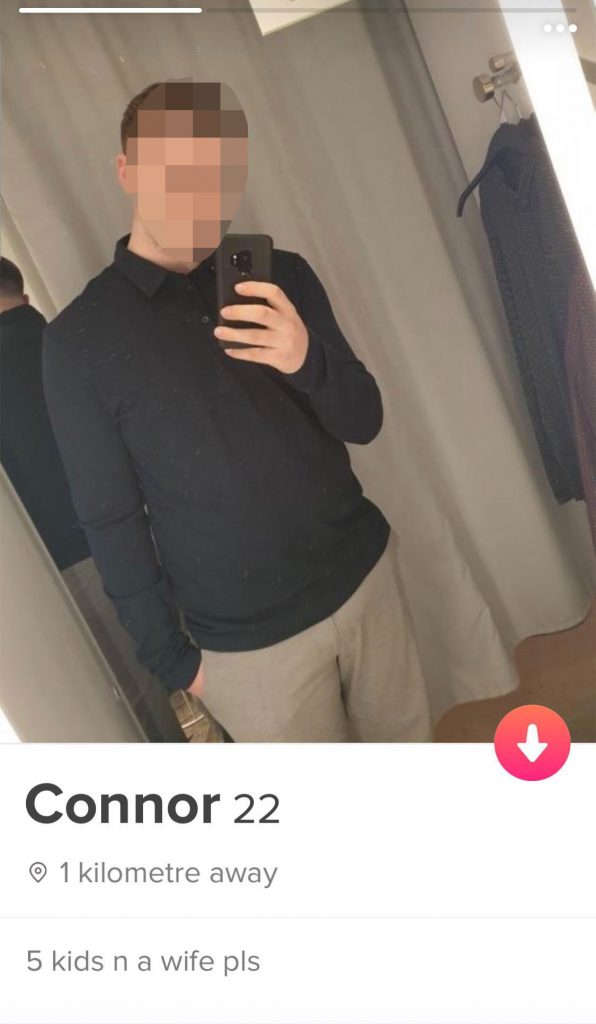 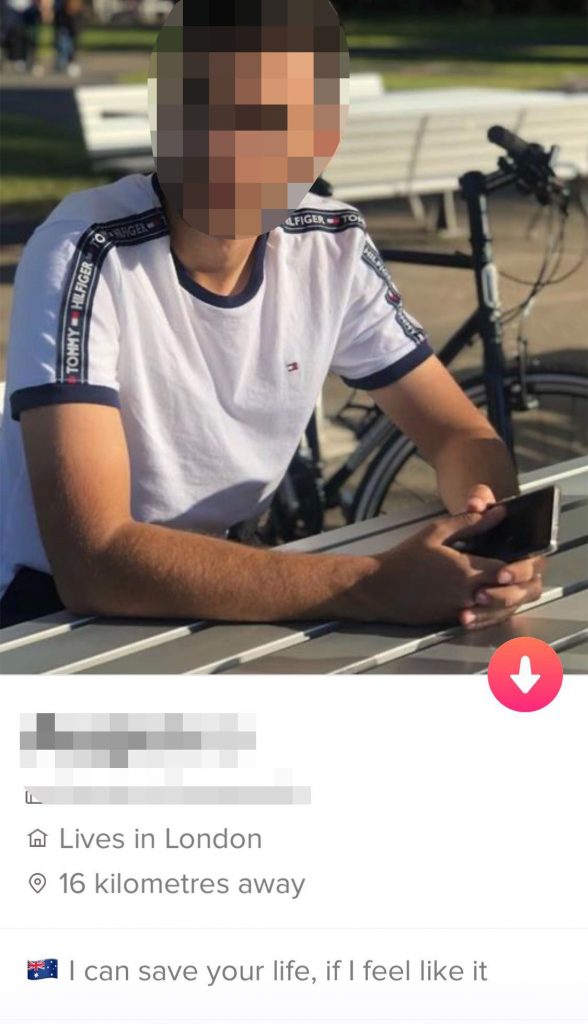 What he’s like in bed: Fantastic. And you would hope so considering he knows the anatomy well. Starts off slowly but really gets into it. Can have sex multiple times in one night and will always initiate morning sex.

What his bio says: His Instagram, Snapchat, and Tik Tok handle followed by “???”. 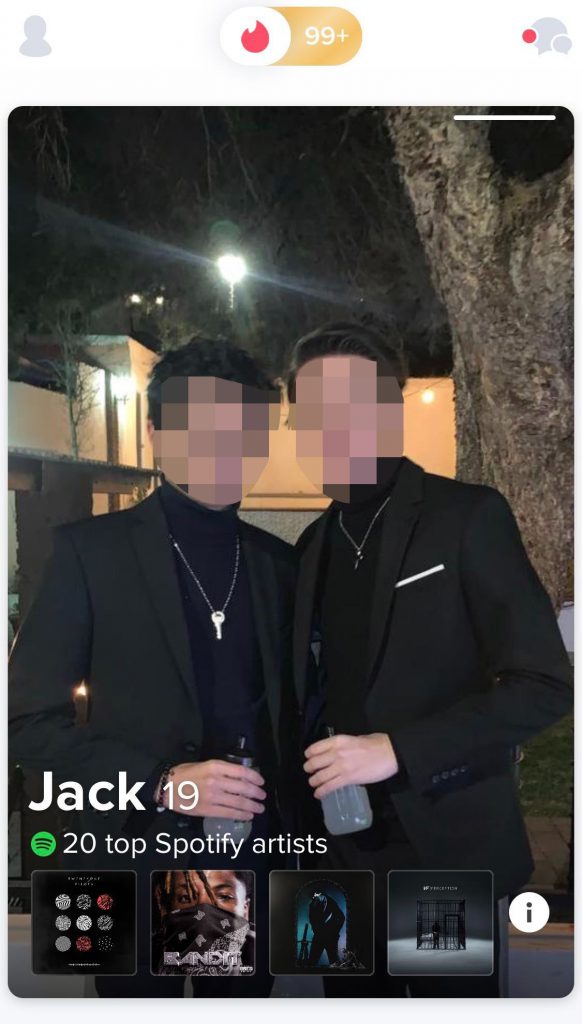 What he’s like in bed: Has sex like he’s done a lot of coke and probably has. May struggle to get it up. If he does will be the dictionary definition of “getting pounded”. Like a piece of meat. Think Scotty T on Geordie Shore. Doesn’t touch your boobs once. Spanks you a lot.

What his bio says: “CEO @ self-employed. Can’t live without my morning coffee. Young Entrepreneur of the Year 2012. ‘When we strive to become better than we are, everything around us becomes better too'” 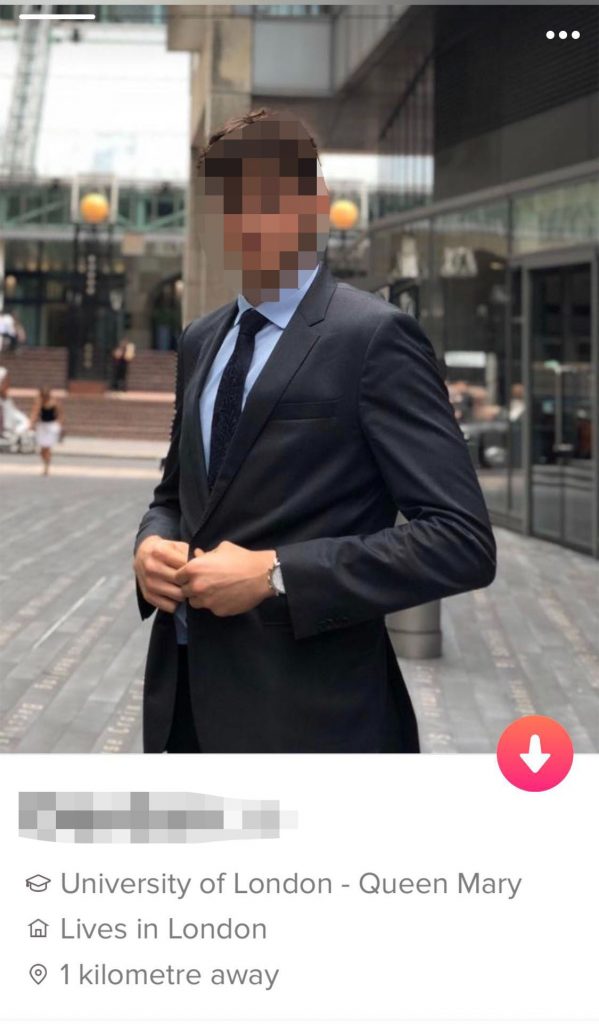 What he’s like in bed: Extremely vocal and enthusiastic. He is very happy to be there. Smiles a lot as he thrusts. Overly complimentary; tells you your body looks amazing from every angle. Goes down on you, but pauses to make comments regularly. Moans more than you, which can be off putting. 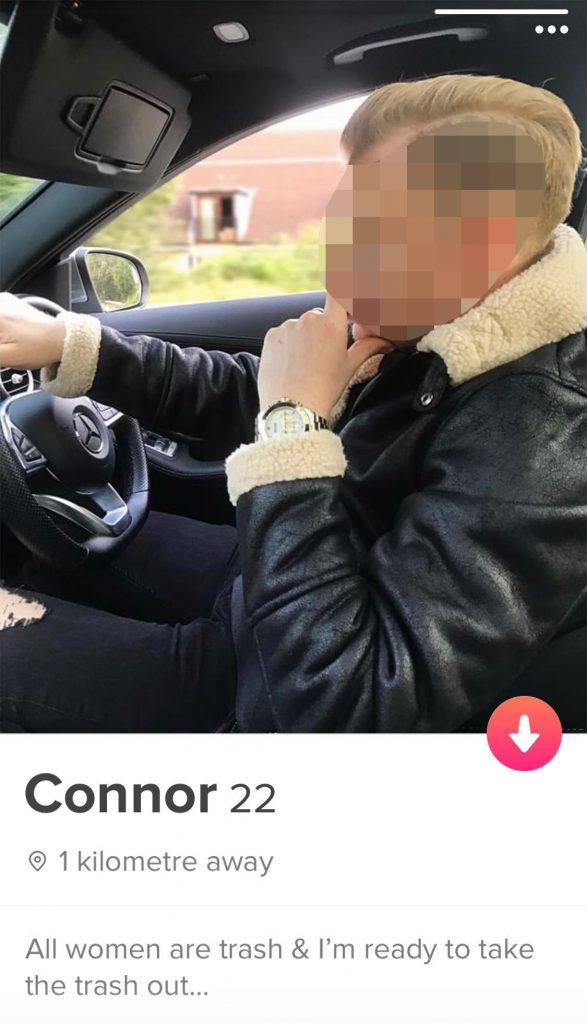 What he’s like in bed: Expects several blow jobs. Will ask for a tit wank. Wants to come on your face. Basically wants to come anywhere but your vagina. Thinks he’s 10/10 in bed but is in fact scared of your arse hole. Hasn’t got a huge amount of respect for women. 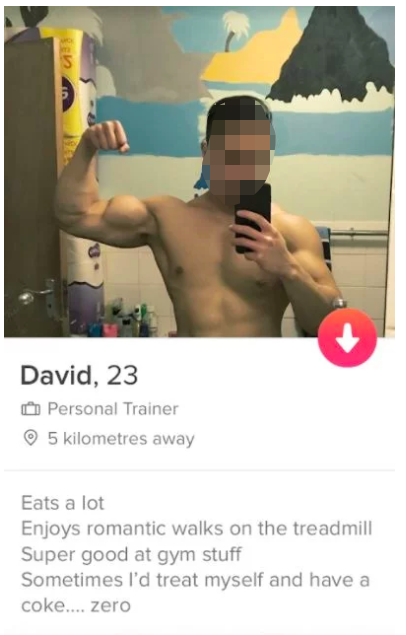 You can listen to our sex podcast “Is it in yet?” on Apple Podcasts and Spotify now. Follow our Instagram for more sex stories.

• Spanking, Watersports and Foot Worship: These are your secret fetishes