There’s a big party and Otis’ house gets trashed

There's a good chance that you've been pining for the second season of Sex Education recently. Maybe you can smell it in the air. Or maybe it's because Netflix has put it on the front page for all of us again, ahead of the release of the second season.

Season two premiers on January 17th and if you haven't already rewatched season one to help pass the time, I'd sincerely advise doing it. In lieu of actual new Sex Education episodes, we have some goss about what is going to happen in the new season.

The returning cast sat down with Teen Vogue and laid a trail of crumbs (crumbs meaning juicy info) in their interviews about season two. From douching to parties to Maeve losing her pink locks, here's a full round up of everything we know so far:

Eric gets involved in the sex clinic

Our beloved boy Eric is back and aside from stunting with some more amazing *lewks*, he also gets briefly involved with Otis' sex clinic. Apparently he's not very good at it though, but he does at least manage to teach Otis about douching. Ncuti Gatwa told Teen Vogue: "Me and Rahim teach Otis about douching, which is very fun. So yeah, that’s great."

Rahim is a new, and very fit, character played by Sami Outalbali. 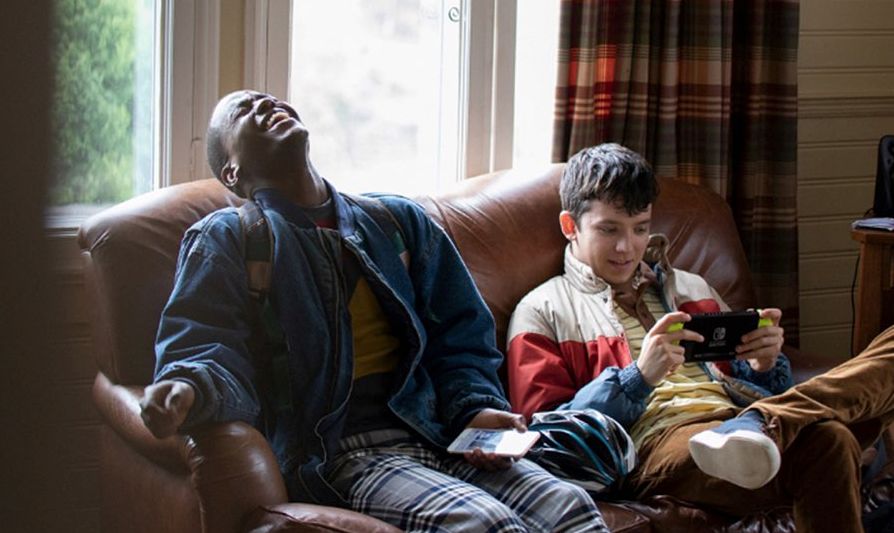 And also becomes a total heartthrob

Sex clinics aside, it turns out that Eric this season isn't so desperate for sex anymore, he's actually beating prospective love interests off with a stick. Not literally.

In season two Eric will have TWO (two!) male love interests, but it's currently unknown who. Given that Adam, who Eric hooked up with last season, is returning from military school this season, bets could be placed there. More detention scenes please.

There are three new characters

Incredibly intelligent Viv, sexy French exchange student Rahim, and Maeve's new caravan park neighbour Isaac. For their Instas (we know you're thirsty) and other deets, we've got you covered. 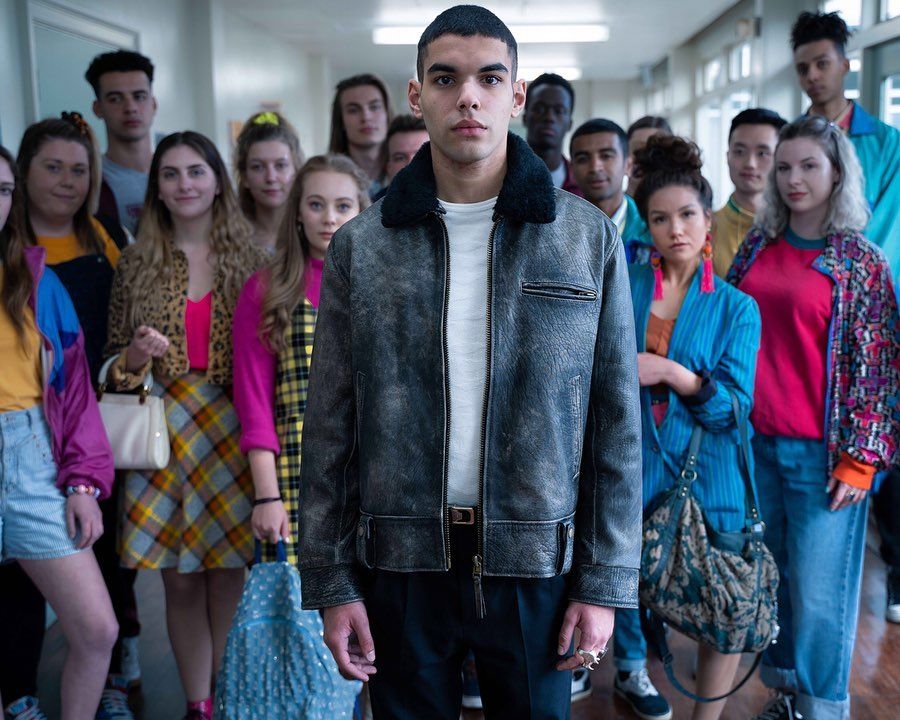 Otis gets in legal trouble with the clinic

Speaking to Teen Vogue, Asa says of season two: "I was excited to play with that and then get back to working with all these guys, with Ncuti and Emma and exploring those relationships. Working with Gillian and seeing how he and his mom's relationship develops and how his clinic, how that progresses and whether that becomes an issue in various different levels legally and morally."

Legally! Let's see where that goes. This could have something to do with the picture of season two Netflix released showing Amy and Maeve talking to a police officer. 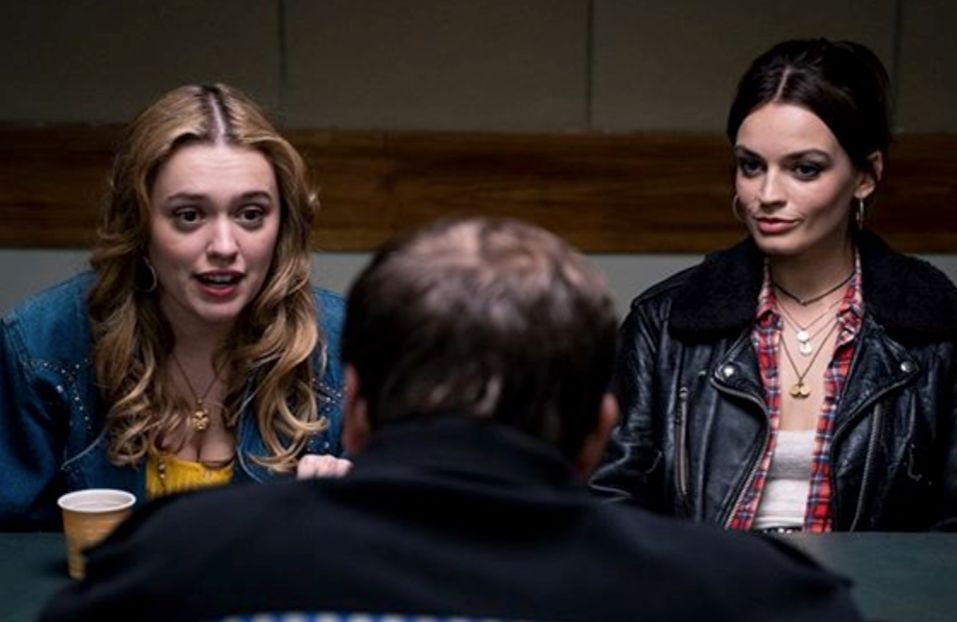 Honestly I'd trust them as my lawyers (Via Netflix)

Promo pics for season two show Maeve with Emma Mackey's natural brunette hair instead of the iconic season one pink/blonde look. Pink was a vibe for 2019 but we're in 2020 now, so nevertheless we move. 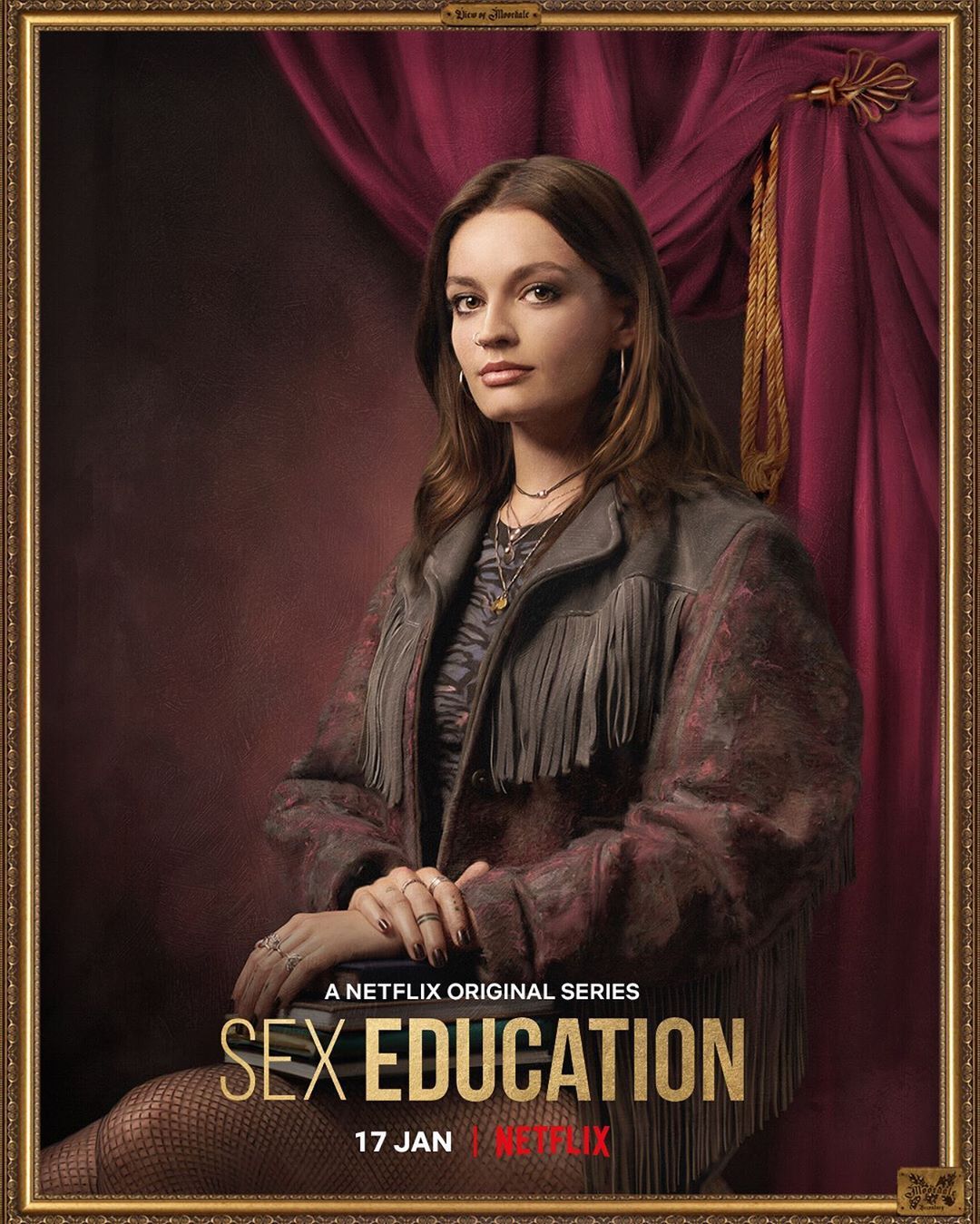 She also starts to own how smart she is

Maeve tried to conceal her inner nerd in season one, but in season two she starts to own it. She joins an "Aptitude Scheme" and spends a lot more time with Aimee, caring less about her "bad girl" persona.

Emma Mackey told Teen Vogue: "She's just owning her narrative in season two and I'm just really happy for her. I remember all of the people asking, ‘What do you hope for Maeve in season two?’ I was like, ‘I just hope she signs up the Aptitude Scheme and spends the time with Aimee.’ That's exactly what she's doing."

There are lots of maternal storylines

Maeve's mum comes back into her life in season two, which is a large part of her character's arc this season. But it turns out Adam's mum also has a storyline, with actor Connor Swindells saying: "Adam just wants some sort of love and affection. His mom’s the closest thing he gets to those things. Even that's sort of weird because she's in a weird place as well. She has an amazing story this season. So that whole family is sort of finding who they are."

Not to mention that Eric's mum also comes into the frame this season, with a new exploration of Eric's family life and their devotion to church. There's mums all over the place in season two! They're everywhere! 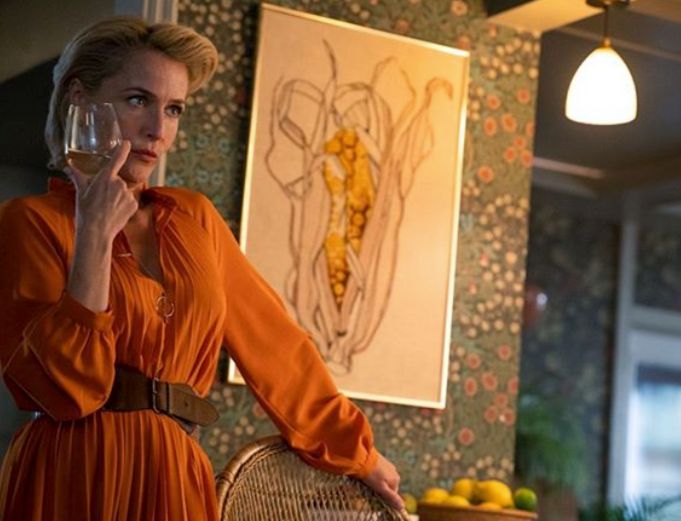 The season is darker and sadder

Sorry to bring you down, but Connor Swindells literally described this season as "way more melancholic". So get ready to cry, basically.

Poor guy! We don't know how this happens, or if it will affect his swimming, but Kedar Williams-Stirling did say that breaking his hand helps to forge a friendship with new character Viv.

He told Teen Vogue: “That relationship is so different than I think he's had with anybody else. Because they don't want anything from each other really, sexually. He's been told to work with her by Headmaster Groff because he breaks his hand." 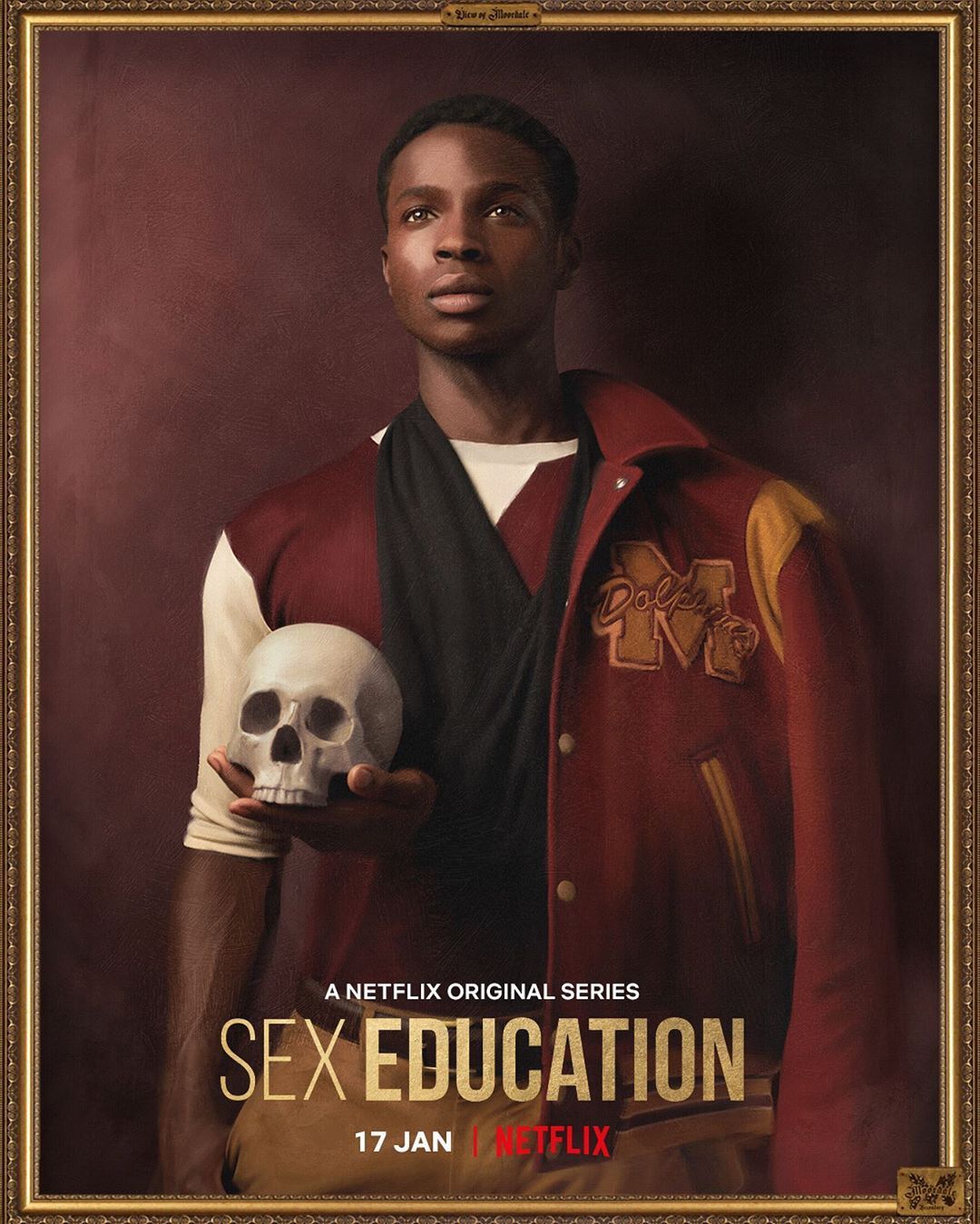 Ola and Maeve still have tension, but, like, in a feminist way

Ola and Otis start officially dating in season two, which means there is still an underlying tension between her and Maeve going forward. But Patricia Allison was clear that she didn't want it to be the stereotypical cat fight drama between two girls going for the same guy that we're all so sick of seeing.

She said: "That was really important for me in the beginning because I was like, 'Oh, I understand that they don't like each other,' but for me, I love women and I kind of want all girls to be on the same page, the feminist that I am. I wanted to play her in a way that was interesting, that we still had the tension and the drama but that it was not actually about Maeve." 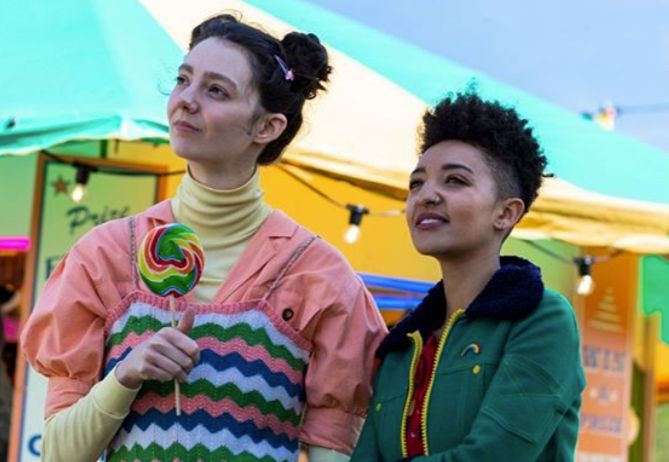 Remember Lily? The hentai-obsessed, crazy outfit wearing gal that Otis nearly has sex with? Well she's back, fan fiction and all, and this time she's writing a version of Romeo and Juliet for the school play. I don't know about you but I am BUZZING.

Sex Education season one is currently available to stream on Netflix. For all the latest Netflix news, drops and memes like The Holy Church of Netflix on Facebook.

• The first look at Sex Education season 2 has been released

Reliving the most dramatic Casa Amor moments on Love Island ever