Laura was announced as the host earlier today

Laura Whitmore announced earlier today via Instagram she is the new host of the upcoming winter Love Island following Caroline Flack’s departure from the show.

Caroline has responded to the announcement via her Instagram story shortly after Laura posted the news.

Caroline said: “I’m glad it’s Laura… she loves the show as much as I do…

“Again…Thank you for your continuous support..It’s a really rough time..

“But I’m doing all I can to keep my head above water and sort this all out.” 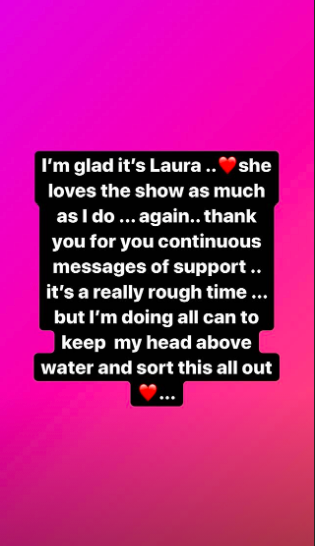 Laura will also be hosting After Sun. Laura said in her post she had spoken to Caroline about taking over the show: “I wish it was in better circumstances; Caroline is a brilliant host and friend. We’ve spoken a lot in the last few days since she stepped down.

“She has been very kind to me and strongly pushed me for this role. I’ve watched her host every series and know I have big boots to fill. I will try and do it justice.”

Caroline stepped down from the iconic hosting role after she was arrested for alleged assault last week.

Caroline will appear at Highbury Corner Magistrates’ Court on Monday.