Earlier this week a Twitter video of The 1975‘s frontman Matty Healy spouting his anti-religious views pissed off a lot of people.

In the video Matty spends two and half minutes ranting about why he’s bored of religions being offended, and how he, as a white middle class man, isn’t allowed to be offended. Seriously. Oh and he wants us all to look at ourselves more, because we’re all incredibly flawed and if you didn’t know we’re going to die.

He essentially sounds like that guy at a house party who no one wants to get stuck with at 5am, who pretends to be a man of the people but in a few years’ time will 100 per cent be voting Tory. He won’t actually listen to anything anyone says, will talk over you the entire time and then proceed to lecture the room about everything that’s wrong with our capitalist society.

Just in case you’re not aware who Matty Healy is and what he gets up to, first of all, lucky you and secondly, this was just the tip of his white saviour iceberg. The problem with Healy is he is intensely hypocritical. He’s a walking contradiction. Healy’s whole brand of “activism” is about making big and clever statements, but not really doing anything to really help the cause. He’s basically just a poser.

Healy has a very long history of thinking he’s the most profound man on the planet. So, let’s reflect on all the times when he’s tried to sound deep but just ended up sounding like a bit of a wanker.

Thank you all so much for your wonderful support. It’s not often a left leaning band is celebrated for a single body of work in that way – we are so humbled and owe it all to you guys who come to our shows and harass me about Antichrist. Love you so much xxxx @BRITs

Oh yeah I forgot that the previous winners, Adele, Stormzy and Arctic Monkeys are massive Tory supporters. And despite claiming to be left leaning and actively encouraging people to vote in the initial lead up, he’s gone suspiciously quiet around the election this week and only done one teeny tweet encouraging people to not vote Tory.

He also claimed his life would be a “nightmare if I was too reliant on things”. Never heard that one before. He cemented his “alternative” image by bringing a disposable camera as an essential and saying that there’s a connection when writing or using a type writer. A type writer? I’m not even going to go into that one. 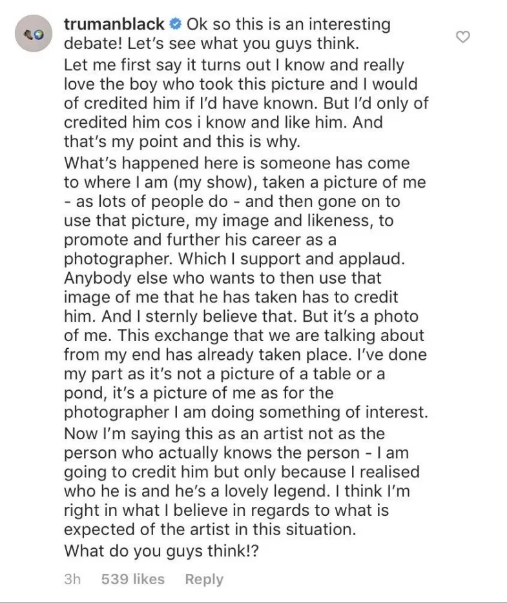 Matty shared a picture to his Instagram of himself that a budding photographer had taken at a 1975 gig but refused to credit him.

This isn’t a debate, you have a huge platform, use it for good and give the guy a credit. It’s not that difficult. And only after receiving a flurry of angry comments did Matty credit the photographer.

I’ve never seen a 40 minute video that contained someone speaking so much and yet saying so little. He tells the interviewer that she’s going to die. Why? What is this obsession with reminding us of our deaths? We’re all aware and listening to 40 minutes of your drivel is going to send me to an early grave.

He also mentions “he’s never really been a witness to that much prejudice.” Him, a son of two celebrities? White and middle class? Rich? Shocking.

He questioned that he may be the Messiah

In an interview with The Guardian when asked if he had been misquoted over saying he was the Messiah, he said: “There is an element of feeling a bit like the Messiah. Well, not somebody who’s here to save humanity, but somebody for whom the world does truly revolve around them.”

So religion is wrong, but if we all worship you that’s fine? I don’t get how someone can not understand how hypocritical they sound.

He said going out with Taylor Swift would have been ’emasculating’

When the pair were rumoured to have had a minor flirtation after Taylor was seen in a 1975 band t-shirt, Matty told Q magazine:  “If I had gone out with Taylor Swift I would’ve been, ‘F*cking hell! I am NOT being Taylor Swift’s boyfriend.’ You know, ‘F*CK. THAT.’ That’s also a man thing, a de-masculating, emasculating thing.”

So you don’t engage in masculinity, but going out with a pop star is a massive dent to your ego? Also, how can you be a feminist and this intimidated by a successful woman?

Skip to a few years later and Matty is a major fan boy and practically begging Harry on Twitter to produce his album.

Hey @Harry_Styles me and George really wanna produce your next album hmu if you wanna it’s cool if not tho I know you’re like super busy etc love!!!!!

He patronisingly said that he wanted to ‘guide young women’

In another interview with The Guardian he said: “I have 450,000 young women [followers on Twitter] and I genuinely believe the empowerment of young women is the most important thing in the world and will lead to the destruction of injustice. So what do I do with that? I try to guide them.”

We’re actually alright Matty, we don’t need the guidance of a self-righteous man, who thinks he’s incredibly woke, when in actual fact, he’s a major part of the problem.

“Young girls scare me, the things they come out with and ask about.”

That time when he said ‘everything is fucked’

Gandhi, Martin Luther King Jr, and… Matty Healy? Seriously Matty, no one wants to hear what you’ve got to say, maybe just stick to making music for 14 year old girls.

•Calling time on Zoella, the 27-year-old woman-child who needs to let go