We’re all losing our heads

Last night, the Game of Thrones Twitter account sent out a single cryptic tweet and everyone lost their minds. There’s been talk of a Game of Thrones remake and the rumour mill has gone into overdrive.

The tweet simply read “Winter is Coming”. With one classic slogan, the internet went wild. We deserve a Game of Thrones remake right??? This must be what they mean??? Every tweet has an underlying message, right???

Here are all the theories flying around about what *that* tweet actually meant.

Right, we’re all mad at Game of Thrones season eight. So obviously this tweet means the creators are answering our prayers and pretending the last season didn’t even happen and we can just do it all over again, right? That’s the main theory on Twitter anyway.

Some of the replies to the “Winter is Coming” tweet include: “Season eight remake is coming” and “Unless it’s a season 8 remake – delete your account.”

Others think the tweet is just rubbing salt in the wounds

Game of Thrones season eight was a huge disappointment and we’re all ready to bury it and move on. The creators really don’t need to try and recover it anymore, we’re over it.

And a lot of Twitter think the tweet is probably just the creators seeing how far they can push us and teasing us with a harsh reminder of the last episodes. One tweet reads: “Thanks for reminding me how bad season 8 was.” Another adds: “Still mad at you”.

Or it could just be a genuine weather warning

Are the Game of Thrones creators simply worried about our general well-being? Maybe the tweet was just a friendly reminder that literal winter is coming and we should all wrap up warm? It has gotten pretty cold recently.

One theory says: “This is either preluding a brand new announcement or is just about actual winter coming.” 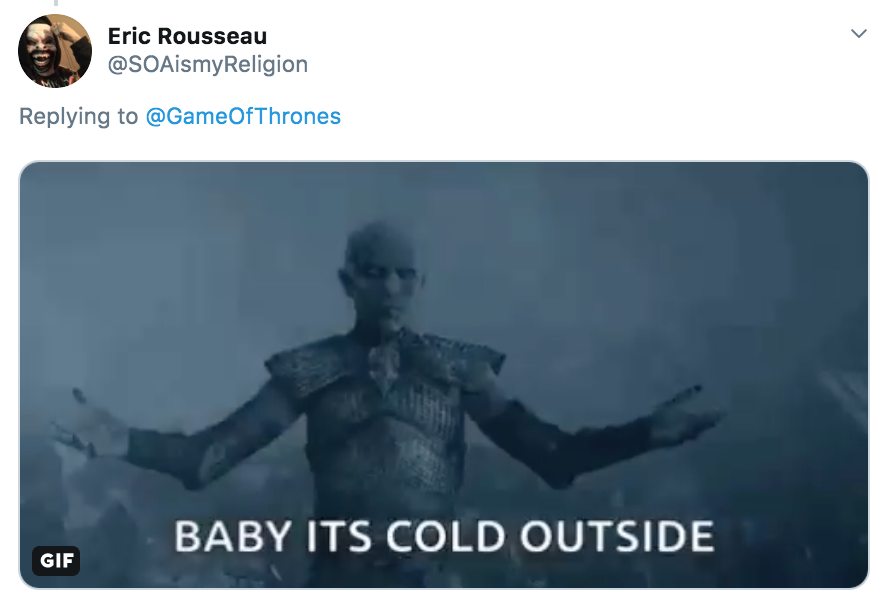 We’ll just leave all of this here.