New cast and script leaks: Every juicy detail we know about Stranger Things 4

The new season has been confirmed by Netflix, but notoriously the wait between seasons of Stranger Things is horrendously long. However there has already been a lot of juicy gossip about the new episodes.

Here is everything we know about Stranger Things 4 – it’s going to be a wild one.

Netflix announced in September 2019 that the show will be back for a fourth season.

A teaser video captioned: “We’re not in Hawkins anymore” was shared and everyone went wild.

The video has had over nine million views on YouTube.

There are going to be four new characters in the cast

According to reports, Stranger Things 4 will include four new reoccurring male characters.

A source told TVLine the series’ creators, the Duffer Brothers, are looking to cast the new roles. Three of the new faces are teenagers and one is an adult. The younger trio range from a metalhead to an entitled jock. The older newbie will apparently feature prominently in a certain storyline set far away from Hawkins.

We can also expect all of the main cast, including Millie Bobby Brown as Eleven, Noah Schnapp as Will, Gaten Matarazzo as Dustin, Caleb McLaughlin as Lucas, Finn Wolfhard as Mike and Sadie Sink as Max to return.

Netflix has not commented on any changes to the cast list.

Robyn was a new character in season 3

On the Stranger Writers Twitter page a picture of the script for the first episode of season four was posted. It shows the episode is going to be titled “The Hellfire Club”.

The writers posted the script captioned: “looking for new members… are you in?”

looking for new members… are you in? pic.twitter.com/P1xAWNUPss

The Hellfire Club are known as a group of villains who were involved in the Dark Phoenix Saga in the X-Men comics of the 1980s. And of course, Stranger Things is set in the ’80s too.

The Hellfire Club corrupted Jean Grey, Professor X’s right hand woman, and fans are now convinced Eleven is going to be like Jean Grey and turn evil in season four.

Nobody is really sure about Hopper’s fate

So Hopper died, right? Then there was that super cryptic end credit scene for Stranger Things 3 that left everyone questioning what was going on.

At the end of the final episode of Stranger Things 3 we were taken to a scary looking base in Kamchatka, Russia. Two prisoners and a Demogorgon were being held there, and two guards were on their way to fetch a prisoner.

One of the guards approaches a door, and the other says: “No. Not the American.” There are lots of theories that claim the American behind the first door is Hopper, and he is in fact still alive. 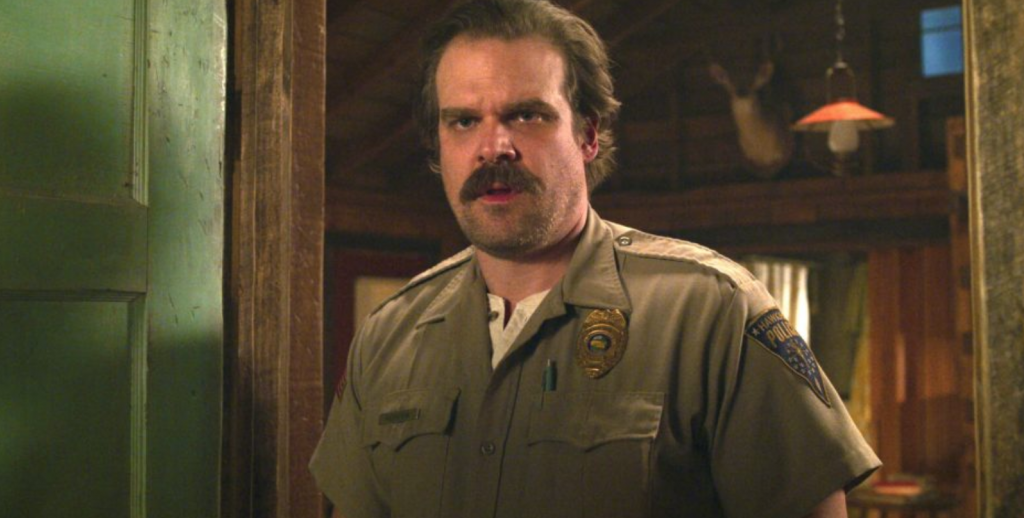 In an interview David Harbour, who plays Hopper, hinted it could be him behind the door. According to the interviewer he said that’s the most likely scenario because throughout the season the main Russian baddie refers to Hopper as “the American”, and having another Russian refer to the mysterious prisoner in the same way was the big giveaway.

To add fuel to the fire, there are reports that David Harbour is contracted to a fourth season. So who knows what’s happened to him?!

There will be eight episodes in Stranger Things 4

When is the Stranger Things 4 release date?

In 2017, the Duffer brothers told Vulture that season four could be the end of Stranger Things. Ross Duffer said: “We’re thinking it will be a four-season thing and then out”. His brother, Matt, added: “I don’t know if we can justify something bad happening to them once a year.”

However producer Shawn Levy has hinted otherwise. He told Entertainment Weekly: “The truth is we’re definitely going four seasons and there’s very much the possibility of a fifth. Beyond that, it becomes I think very unlikely.”

This article will be updated when we know any more Stranger Things 4 details.

• Quiz: Which Stranger Things character are you?