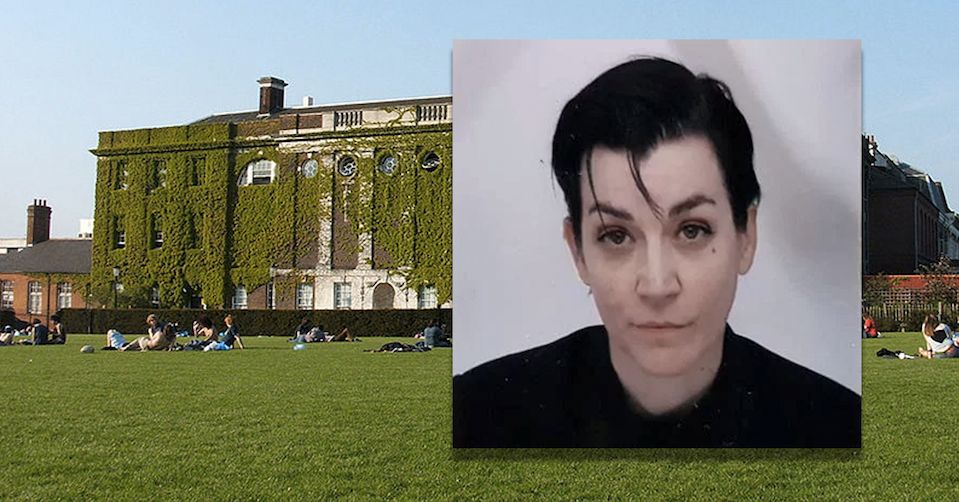 Fine Art lecturer Dawn Mellor adopted her non-binary persona 'Tippy Rampage' in 2016 for a performance piece she was conducting during the research of her project, Sirens.

Tippy Rampage was one of five "invented personas" adopted by Dawn she used during the research of her project to explore, with informed consent, the identities and experiences of her transgender/non-binary students both in and outside of university.

The project has been called "unethical and insensitive" by Goldsmiths SU, who said that students felt "exploited and ridiculed".

Professor Michael Archer, a senior member of Goldsmiths Department of Art, emailed students about Dawn's change of name: "I'm writing to let you all know that your colleague Dawn Mellor has taken the name Tippy Rampage.

"When referring to them either in writing or in conversation they would prefer that you use the pronouns they/them/their. Formally, they will be Mx Tippy Rampage. Tippy is arranging a new college email address, and I'll let you know as soon as this has been sorted." 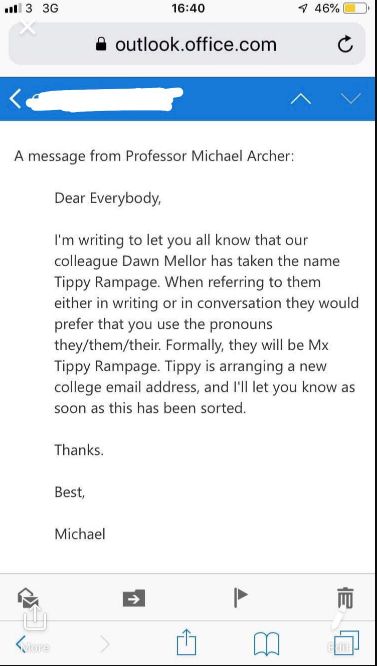 In an interview about her 2016 research project Sirens, which explores and satirises identity politics on social media, Dawn stated that the findings of the research were due to her students' and tutees' experience with her invented persona, Tippy Rampage.

"Dawn Mellor was the echo-chamber character that emerged, who started as one person, then 'transformed' to Tippy Rampage." Dawn said.

Dawn recounted that her students, who chose her to be their tutor under the impression that she was Tippy, were "a handful of students performing a certain type of politicised self" and that "some of the shifts in prose in the book come from those experiences. 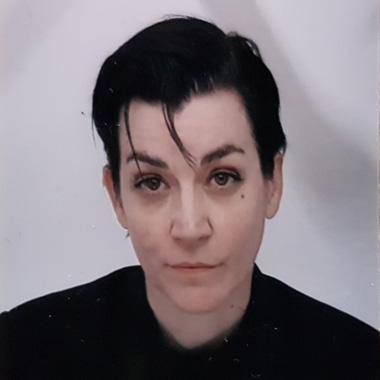 In an email seen by The Tab, on Saturday Dawn invited other academics to a book launch for Sirens taking place in December. She says: "The book was initially proposed several years ago in my job application form, for my role as lecturer in studio practice for the Fine Art BA and contains in full the presentation I gave for the job interview.

"The character Tippy Rampage, performed mostly onsite at Goldsmiths and on social media accounts, has contributed to some parts of the research."

The controversy has prompted outrage from Goldsmiths SU. In a statement, they said: "Regardless of how this individual identifies, these stories have been co-opted into research, without informed consent, which we see as unethical and insensitive.

The statement added:"Our primary concern as a STUDENTS’ Union is the students who have been affected here, and we are already deeply and truly saddened to hear the distress this has caused many students. in particular they feel exploited and ridiculed.

"At this time we ask: what is Goldsmiths doing to support students affected? How was unethical research based on student experience allowed to happen? What conversations are being had with this member of staff?"

Robin Craig, chair of the TransStudies UK, a network for academic interest in transgender studies at Roehampton Uni, claimed that, in an email to a colleague close to Dawn Mellor: "Goldsmiths students did not know whether Tippy was a performance piece and could not consent to being part of Mellor's project."

someone close to Dawn Mellor sent me an email stating that Mellor is not cis – if so, that's grand and I'm happy to correct the record. However, my concern is regarding student trust, and for the record this is my response: pic.twitter.com/u42WqdeXc5

He also questioned whether students of Tippy, "who would use they/them pronouns with their professor," were informed that Tippy was a performance piece for a research project in 2016.

However, Hatty Nestor, a writer who interviewed Dawn in 2016, stated on Twitter that Dawn had a very complicated relationship to gender.

A spokesperson for Goldsmiths, University of London said: “Goldsmiths values its diverse and inclusive community and we take our duty of care to our students and staff very seriously. We are fully committed to academic freedom and freedom of speech within the law.”

Goldsmiths refused to say whether students were aware "Tippy" was a persona for a project.

Dawn Mellor did not respond to repeated requests for comment.

In full, Goldsmiths SU said: "From an SU perspective, it’s unclear whether this member of staff is non-binary or not, and we don’t want to put a magnifying glass on how any individual identifies: identity consistently shifts and evolves. this issue however was raised as certain posts online have implied that a non-binary identity was being performed for academic purposes alone, as satire, and rightfully, people feel hurt and outraged by that. Gender identity is not a game. We think it’s fair for students to raise their upset over having potentially been misled, upset that potentially their identities have been used as the basis of satire.

"What is important to note is that non-binary and trans students explicitly sought out this member of staff, as they trusted them to be someone who would understand their lived experiences and who they could talk about these experiences to. Regardless of how this individual identifies, these stories have been co-opted into research, without informed consent, which we see as unethical and insensitive.

"This sits in a wider context of trans and non-binary people’s experiences being approached as a thought experiment, something to be speculated on, rather than respected and celebrated. There is also a trend of research being done without the collaboration or respectful involvement of trans and non-binary people, not partners in the process but used as material. this case peers right into the heart of that context.

"Our primary concern as a STUDENTS’ union is the students who have been affected here, and we are already deeply and truly saddened to hear the distress this has caused many students. In particular they feel exploited and ridiculed.

"We are working with students at present on an open letter to the college to outline our complaints and concerns. for anyone who we haven’t heard from yet, please reach out to us — we’re here to represent you and have no reservations about holding Goldsmiths to account.

"At this time we ask: what is Goldsmiths doing to support students affected? How was unethical research based on student experience allowed to happen? What conversations are being had with this member of staff?

"So in sum: Goldsmiths, please step up and support your trans and non-binary students."