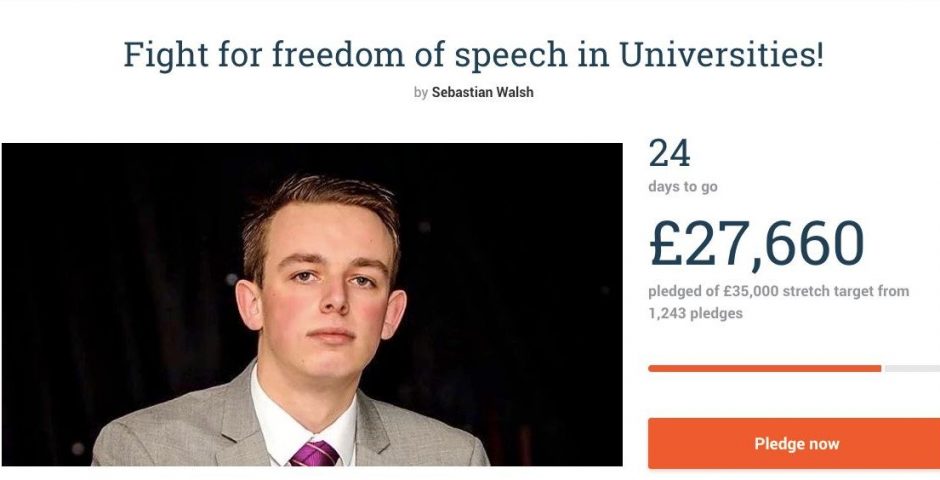 A UKIP student who was suspended for complaints over comments he made on Islam has raised nearly £30,000 to take his uni to court.

The University of Central Lancashire suspended Sebastian Walsh after he said "Halal meat is violent and barbaric" and that "the UK is being Islamified" in a seminar.

Right-wing YouTubers Sargon of Akkad and Count Dankula (real names Carl Benjamin and Markus Meechan) have thrown their support behind Sebastian's efforts, with Benjamin even making a "very generous donation".

Sebastian, a UKIP member and Young Independence regional chairman, is currently taking his case up with the Office of the Independent Adjudicator (OIA), the university sector's complaints board, after failing to win an appeal against his suspension.

After this, he says he'll go to court.

Update on the University Case

After communications with my Barrister and the opposing council to take this to the Office of the Independent Adjudicater (OIA) to conduct an investigation. After the outcome comes from the independent source then we will take to the court. @UKIP

Sebastian's "Fight for freedom of speech in Universities!" crowdjustice page has managed to raise £27,600. With 1,243 donations so far, it's exceeded his initial £20,000 target.

"I am not going to let this go until we have sent a message to all universities that we will not allow free speech to be trampled," he wrote.

Fellow UCLan students made official complaints after Sebastian, a first year Children, Schools, and Families student at the time, let loose on Islam during lectures, seminars, and breaks.

Sebastian says that he told other students "Halal meat is violent and barbaric" and that he would never eat a KFC or Subway.

He also said "the UK is being Islamified", and argued immigrants shouldn't get free healthcare, adding "anyone who doesn't have legal status in the UK should not be given free handouts of our services".

However, the university say the extent of the comments is greater than has been reported in the media, but they cannot divulge due to a duty of care.

After a disciplinary hearing in January, Sebastian was suspended until the end of the academic year. He was told he could return if he did diversity training and promised to behave well in future.

However, he did not respond to either of the universities offers.

In April, he lost an appeal against the suspension, however took up the university's recommendation to take his case to the OIA.

Sebastian is no longer a student at UCLan, as he allowed his enrolment to lapse, however the uni say they would let him back if he did the training.

Since launching the appeal, Sebastian has gained support from two controversial right-wing YouTubers.

Carl Benjamin (Sargon of Akkad), the YouTuber and UKIP member who said he "wouldn't even rape" Labour MP Jess Phillips, promoted Sebastian in a video and gave a "very generous donation" to the crowdjustice appeal.

Markus Meechan (Count Dankula) hit headlines after being convicted of a hate crime for teaching his girlfriend's dog to do a Nazi salute. Sebastian thanked fellow UKIP member Meechan for a "signal boost".

The Tab reached out to the pair for this story, but they didn't respond.

Universities are becoming bastions of censorship.https://t.co/NFUXfuFwmM

A UCLan spokesperson said: "The University of Central Lancashire (UCLan) is proud to host a campus community comprised of many cultures, faiths, nationalities and beliefs. It values this rich diversity and takes seriously its responsibility to provide a safe and welcoming environment for all. The University promotes lawful, open debate, the discussion of varying views and academic freedom and has in place robust procedures to ensure this can take place.

"In this case, a number of official complaints were made by students regarding a series of offensive and inappropriate comments made by Sebastian Walsh during lectures, seminars and at break.

"We cannot divulge the actual comments made by Sebastian as they formed part of a confidential investigation. However, they clearly breached a number of the University’s conduct regulations, including those relating to harassment and bringing the University into disrepute.

"In line with the University’s official procedures, an investigation ensued, and a disciplinary hearing took place. The student was temporarily suspended for the remainder of the academic year and was made aware that on the successful completion of a diversity training course and signing an undertaking regarding future conduct, he would be able to resume his studies.

"In accordance with the University’s regulations, Sebastian subsequently appealed against the original decision and an appeal hearing was arranged on two occasions. The panel did not uphold the appeal, although it did take the opportunity to clarify a constructive way forward to enable Sebastian to reflect to re-engage with the course. Sebastian has now referred the matter to the Office of the Independent Adjudicator for Higher Education (OIA).

"The University is awaiting the outcome of this review.

"The University wrote to Sebastian twice to give him the opportunity to engage with the conditions of the hearing and undertake the bespoke training we had organised for him. He did not respond to either letter."

Neither Sebastian, Carl Benjamin (Sargon of Akkad), or Markus Meechan (Count Dankula) responded to The Tab.

Know anything about this story and want to let us know? Email [email protected] in confidence. 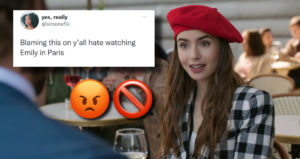 Enough is enough: It’s time to stop our culture of hate-watching Netflix shows 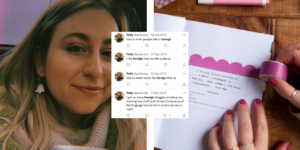