Get ready to lip sync for your life because RuPaul’s Drag Race UK is here. The first episode hit BBC iPlayer last night and it was nothing short of fierce. Plus, the drag race memes that followed were incredible.

The first episode had gags, EastEnders episode references and even Kim Woodburn got a mention. It was incredible. If you had ideas in your head of what the UK version of Drag Race would bring, it probably delivered more. We’re tacky, filthy and the class was minimal at times. But that’s what made it so good. Here are the best RuPaul’s Drag Race memes that sum up the first episode. Start your engines.

1. She deserved to win for this alone

'She looked like an estate agent that's gone to Regents Park Zoo and said could you paint my face for 50p and then she's gone back into work and gone what do you think girls? Grrrr.'@AlanCarr was born to be on #DragRaceUK and I can't. stop. laughing. pic.twitter.com/6XvbBkU9k1

US Drag Queen entrance: I’m here to slay the competition!

Americans trying to find out what all the UK slang means such as; gob, slag, minge 😂. #DragRaceUK #DragRace pic.twitter.com/nhG1yFpeTV

12. It has to be done or I will file a complaint

Honestly if Vinegar Strokes doesn’t do Alison Hammond for Snatch Game then what are we paying our licence fee for? #DragRaceUK

13. How can you not know the QUEEN herself??

14. Even I struggled at times 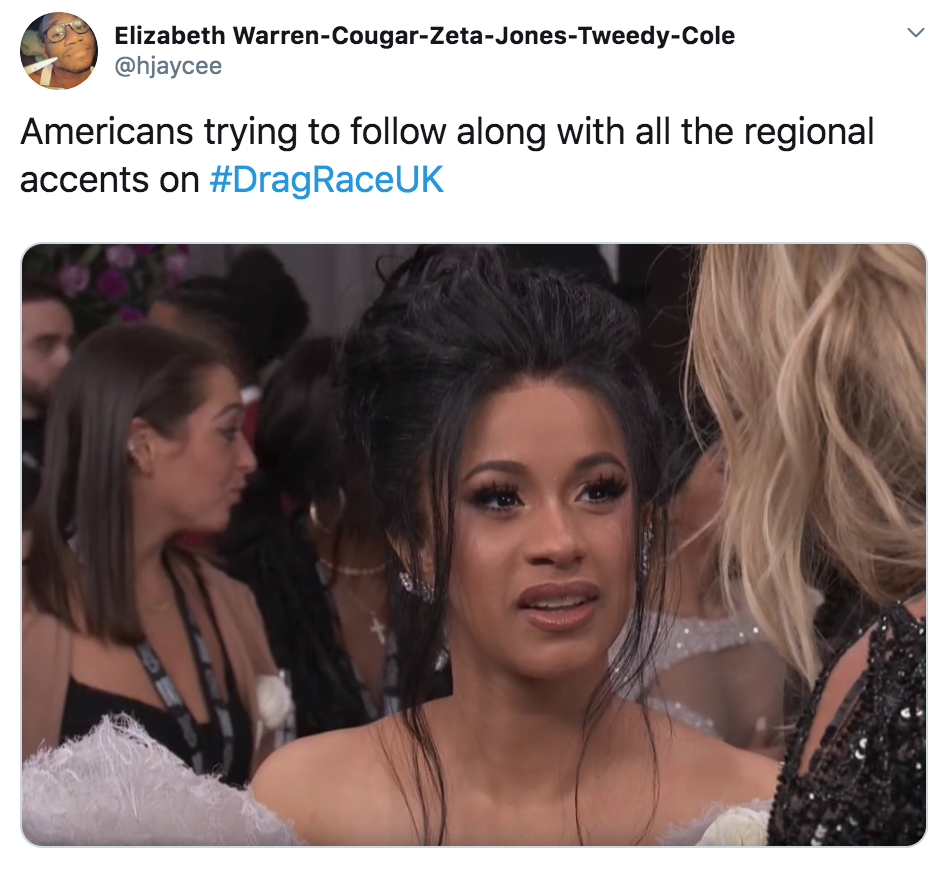 15. This is the most British thing I’ve ever read

16. Seriously though what an icon

I LOVE how fucking crass and ridiculous and British #DragRaceUK is – no saccharine American over-production, just pure British irreverence, tits out and all! This is OUR drag race, not a cheap localised imitation. What a brilliant first episode!!

19. Our everyday language, presented so beautifully

Be still my heart. “Minging”, “twat” and “gobshite” are words being said on #DragRaceUK

1. It’s better than I ever imagined
2. The Brits are just pure filth
3. The Vivienne looks like Noel Fielding, it’s amazing
4. Sum Ting Wong sounds like Nick Frost & she is epic
5. So there is no prize money & the winner of ep 1 got a pin badge 🤔 #DragRaceUK pic.twitter.com/E40nwsluPy

— A Twenty Something Lesbian (@nicbeanquest) October 3, 2019

23. My favourite for this moment alone

Vinegar Strokes: "I didn't just become a little bit of a slag……I became a total slllaggg"

Hands down the best entrance quote ever on drag race! pic.twitter.com/rV7PUU0uHf

Sum Ting Wong gets my vote for dressing as a stamp. Not a sentence I thought I’d ever say#DragRaceUK pic.twitter.com/j1XVDUQYzM

RuPaul: I’m worried a UK drag race may be too niche for US audiences

32. I feel sorry for people that didn’t understand

34. I can’t stop thinking about this

“She looked like an estate agent that's gone to Regents Park Zoo and said could you paint my face for 50p and then she's gone back into work and gone what do you think girls? Grrrr.”

RuPaul’s Drag Race UK is available to stream on iPlayer.

• This queen wrote her dissertation on RuPaul’s Drag Race