It’s not the first TV show to address this issue

Netflix’s new drama, The Politician, pokes fun at stereotypes and is an extremely self-knowing portrayal of the social issues affecting teenagers. However one of the character’s story is particularly familiar: Infinity Jackson’s.

The Politician is based on student Payton Hobart’s quest to become student president and ultimately President of the USA. But one character whose story you may feel like you’ve heard before is Infinity’s. Infinity Jackson is a shy high school student who is battling with cancer. However her “battle” isn’t actually what it first seems and her story has a lot of parallels with the real life case of Gypsy Rose Blanchard. So much so viewers are saying Infinity’s character is “modelled” on the true events.

If you thought you recognised this plot line from somewhere, you were definitely right.

What is Infinity Jackson’s story in The Politician?

At first, Infinity Jackson is introduced as a girl at the high school who has cancer. She is Payton Hobart’s running mate in his campaign to become student body president.

The Politician Infinity and her nana

As the show goes on, it is revealed that Infinity’s illness isn’t real. She is being poisoned by her nana who has Munchausen by proxy.

Munchausen syndrome by proxy (MSP) is a mental illness where a caregiver causes or makes up an illness or injury to make it look like someone is sick. It is known as an attention disorder and the person with MSP doesn’t usually seem to be motivated by a desire for any type of material gain. However in the case of Infinity Jackson, her nana seems to enjoy the “celebrity” status the illness gives Infinity and the free things they receive as a result of it.

Who is Gypsy Rose Blanchard and what happened to her?

Infinity’s story is extremely similar to that of Gypsy Rose Blanchard. Gypsy Rose was born in 1991, and her mother also had Munchausen by proxy. Gypsy’s mother, Dee Dee Blanchard, claimed her daughter had leukaemia and several other chronic conditions. She said Gyspy Rose had the mental capacity of a seven-year-old because she was born prematurely. She was making up different illnesses from when Gypsy Rose was a baby.

Gypsy killed her mother and is now serving a 10-year sentence. Gypsy Rose’s story is portrayed in the true crime documentary “The Act”. 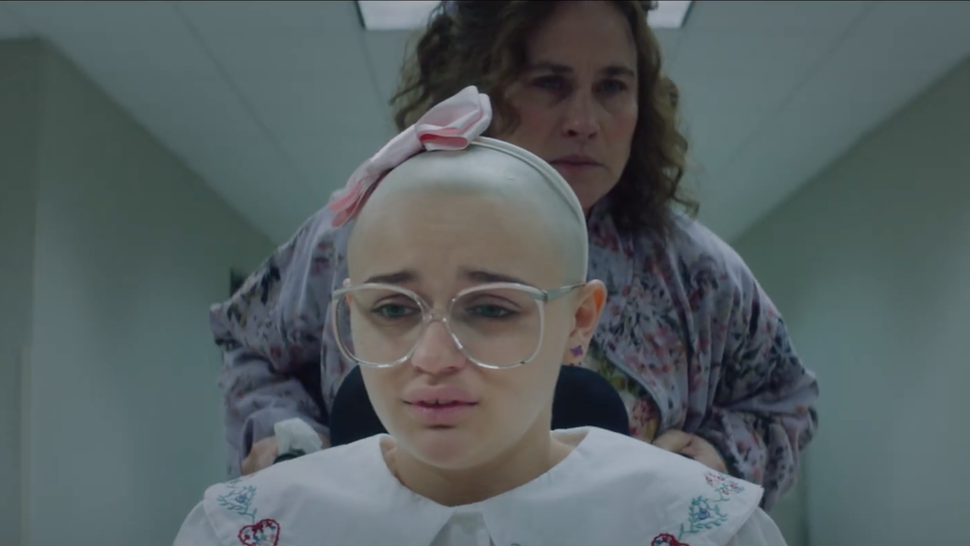 Gypsy Rose and Dee Dee Blanchard in The Act

Is Infinity’s character based on Gypsy Rose?

In The Politician, the way Infinity dresses and her high-pitched voice mirrors Gypsy’s portrayal in The Act. Infinity’s nana, Dusty, also has similar characteristics to Dee Dee in the documentary. Dee Dee said Gypsy Rose had the mental capacity of a child and there are references in The Politician to Infinity being childish.

I just started #ThePolitician and are Dusty and Infinity supposed to be modeled after Gypsy Rose Blanchard and her mom or…?

Jessica Lange, who play’s Infinity’s nana Dusty, told Decider: “I wasn’t aware of the story, and I determined not to look when somebody told me there was a documentary about them. Ryan was very careful in not including anything that could harken back to them. So we did our best to avoid any reference to them whatsoever.”

Zoey Deutch, who plays Infinity, told Refinery29: “Like so many other things in The Politician, there’s a lot of social commentary about things that are very much still in the zeitgeist. It’s very fair to draw comparisons. But I would just like to reiterate that these are fictional characters in a very fictional world. So that is how I can comment on the comparison. Clearly it isn’t that relationship, but I understand the drawing of comparison.”

• I rewatched the first season of Glee and honestly what were these people on?

Updated: This map shows where coronavirus cases are rising at UK universities