Ovie’s a model now: We stan

Tommy and Molly-Mae are moving in together

In an interview with The Sun, M-M said Tommy had "pretty much moved in" to her flat in Manchester. The two are now looking to find their own place.

She said: "Now we are looking at getting somewhere together that’s bigger as my flat is great but only really for one person. He’s six foot, two he takes up the whole place.

"Everything is so good, we’ve made time for each other and we’ve not struggled with it one bit because it’s just how it is and we know we are going to come back together in a couple of days so it’s fine."

There is a brilliant humble brag in that quote about how much of a chonk Tommy is, if you can spot it.

Following the avalanche of post-villa bread obtained by Lucie and Molly-Mae, Maura has joined the rich list with a whopper of a deal with the lingerie brand.

A source told The Sun: "Ann Summers felt that Maura was the ideal celebrity to front their latest campaign. Not only has she got a bubbly and fun-loving personality, but she’s open about loving sex and has a fantastic figure."

Tissues at the ready ? Tonight friends and family are going into the villa to see the Islanders ? Who else loves this part of the series? ❤️ #LoveIsland #TeamMaura #Maurtis

"They’re hoping that social media followers will rush into stores to buy her lingerie," the source added in what might be the saddest quote ever.

Ovie is an ASOS model now and so is his dad

Ovie has also been making moves, and to the surprise of absolutely no one he's doing a bit of modelling for ASOS. Check out this adorable picture of him and his dad:

Say hi to Ovie’s dad, you’ll be seeing more of him ? pic.twitter.com/8DLAlY8Uut

Lucie’s tongue is back because you have sinned

If you can look at this video and resit the urge to cringe so hard you shit yourself you win a prize.

There are no words.

In more banterous news, the ever underrated pairing that is Chris and Francesca have blessed us with a pretty good imitation of that iconic Cadbury's advert.

Ok so Chris and Francesca are my favourite people. This used to be one of my favourite adverts along with the gorilla one pic.twitter.com/GCnuxMjAyo

They deserved better, imo. Whatever happened to those weird eyebrow kids anyway?

In what will one day be recorded as the downfall of modern feminism, Anna apparently left two ex-Islanders out of her sleepover last week. The audacity.

Molly-Mae, Maura, Lucie, and India were absent from the slumber party, which Amy posted to her Instagram story with the caption: "Instagram vs Reality. Great night with the gals ‘let’s do this again real soon.’" 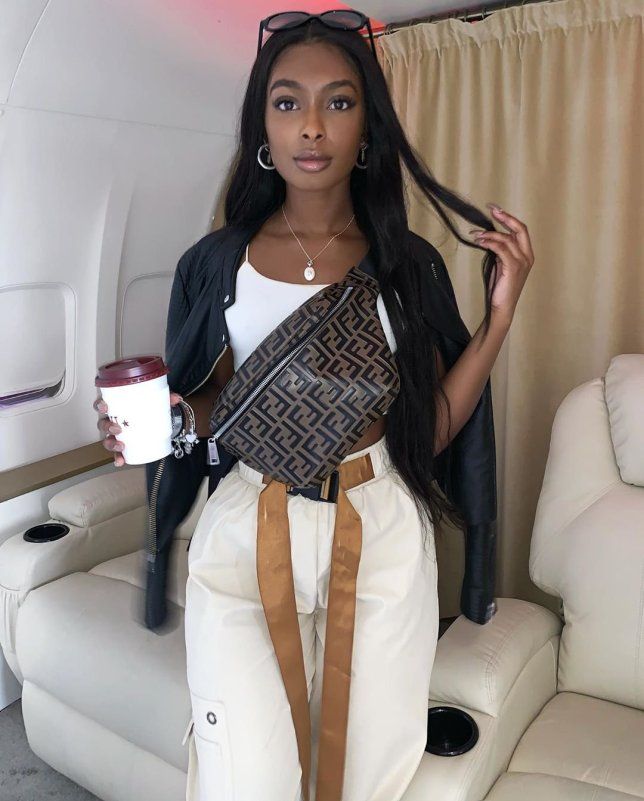 Last week Jordan uploaded an Insta of her next to a very fancy-looking plane seat with the caption: "As long as the outcome is income… I don’t care."

Unfortunately for her, any illusion she was trying to create of her flying first class to Thailand was spoiled by Danny, who uploaded a pic to his Insta story a few minutes later of the pair in economy.

After a few people made fun of the pictures on Twitter, Jordan retorted: "This picture wasn’t taken on a plane maybe your next hate comment will be more accurate and informed."

In truth, Jourdan's Instagram was taken in the private selfie booth created by mobile network Three – the same one Wes used earlier this year.

Belle hosted a Love Island reunion and Molly-Mae wasn't there

In more secondary school-level beef, it transpires Belle also gathered the ex-Islanders together for an influencer dinner party while Molly-Mae was doing PAs in Scotland and Majorca.

Molly-Mae's last notable interaction with Belle was via Anton, who for some reason made a very public deal about unfollowing Molly-Mae on Instagram.

There’s a video going round of Tommy doing NOS

Last week The Sun were handed a video of Tommy inhaling from a balloon before his eyes roll back into his head and he "passes out".

Amazingly papers like The Sun still refer to NOS as "hippy crack."

In what can only be described as some very convenient phrasing on The Sun's part, Amy has told a radio host she'd ben keen to go on the show if asked.

She said: "I would love to. I’d absolutely love to.

When the host pointed out she sounded like she was campaigning, Amy said: "Yeah, get Aims in the jungle."

If anything, Amy going in the jungle should be vetoed on the ground she refers to herself as "Aims."

Molly-Mae's collection for PLT has been unveiled, and you can check out the range here. We'd embed some Instas but the PLT account has been put on private for that delicious nutritious follower growth so I guess we'll go fuck ourselves.

Thankfully Molly-Mae has uploaded a whole one pic! Here it is!

PRETTYLITTLETHING X MOLLY-MAE IS OFFICIAL!?? I don’t think this will ever sink in for me. My very own collection with @prettylittlething will be exclusively available to PLT’s Instagram followers for the first 24hrs! Make sure you’re following @prettylittlething they are going private at midnight TONIGHT so follow now to be able to shop the collection tomorrrow at 10am! I’m so beyond excited right now?

Remember when Joe was said to be charging £1 because it was kind of included in club entry. Well Tommy is running a much more efficient operation, which saw the runner-up charge £30 for a meet-and-greet, and £15 for just a photo at a Blackpool shopping centre. If you do the maths it works out that Tommy rates his own chat as being worth £15.

Olivia Attwood has been screaming at Chloe Meadow on TOWIE

Olivia Attwood landed on TOWIE over the weekend, and she got stuck into a lovely row with Chloe Meadows. From the looks of it they were arguing about who had been a better friend to Shelby while she was on holiday.

She said: "You spoke to Shelby every single day when she was in Mallorca?

"Don't wind me up. I am Shleby's friend. What are you going fucking on about? That you spoke to her every day."

I mean honestly you could glean anything from the exchange, so check out the video and try and make sense of it.