Love Island Gossip Column: Curtis got hacked! And which Islanders are moving in together?!

He was scared his nudes would leak ew

We knew Amber was scouted to be on Love Island because democracy is a lie and regular applicants are simply too ugly to be allowed on our televisions.

What we didn't know what that the 2019 winner had been approached the year before by producers via Instagram.

In a live Q&A with fans, Amber said: "I didn’t actually apply to go in the villa, I got asked via Instagram.

"I did actually get asked the year before but I had a boyfriend – but let’s not talk about him.

Molly-Mae says Anton is fuelling the fire between them

After their totally avoidable and petty falling out over him unfollowing her, it would seem Anton and Molly-Mae are at it again.

Feels good to be home?

Speaking to OK! Magazine about the trolling she'd experienced, Molly-Mae said: "Everyone has seen that I’ve been getting quite a lot of backlash and hate online, so for him to then add fuel to the fire was quite shocking.

"I know Tommy would never do that to Belle if she was in this situation, because he’s not that type of person.

"I think it showed more about him than anyone else. It’s a shame that this has happened. It was unnecessary. I want to be able to support everyone who was on the show. We all did this together."

Why can't they all just get along?

Curtis's Instagram got hacked yesterday, and a series of stories offering free phones, vouchers and an actual car went up on his gram.

You'll be shocked to hear no one dumb enough to swipe up on any of the stories was rewarded with any of those things.

VILLA NEWS ❤️?:
Just to clarify… DO NOT swipe up on any of Curtis’ Instagram stories because his account has been hacked… stay safe 🙂#loveisland #loveislandfinal pic.twitter.com/3gQ6ZEvNaI

The fourth place Islander's messages to Maura could have been made public. Thankfully they weren't, and you won't have to read Curtis calling Maura a "talented young lady" in DM form.

Curtis has been getting that bread as a receptionist on The Greatest Dancer, so this was probably a very big inconvenience to him. Our hearts bleed.

The Mirror obtained a clip of Amy giving a speech at a birthday party in which she claimed to have lost friends during her stint on Love Island.

Your vibe attracts your tribe ??? balloons by @studioplayco ?#gifted

She said: "The criteria for today’s invitation list was as follows – nice to me before the villa, supportive whilst I was in the villa, and nice to me when I came out of the villa.

"A lot of people that have been in my life for a long time didn’t actually meet that criteria, which is really sad but I am so grateful that I have all of you.

"And I know you are my real friends because a lot of you were banned from Facebook during the time I was in the villa.”

Speaking on Radio 1Xtra Talks, Yewande said her, Amber, and Anna all struggled to find love due to the colour of their skin.

Brunch vibes ?! What’s everyone getting up to today ? What’s your favourite place to go for brunch ? ??

She said: "We didn't find anyone who liked us.

"It was always someone coming in and saying 'my type is blonde and petite'."

"We'd just look at each other and say, 'They're obviously not here for us'."

£200,000 is a lot of money right? Well that's how much the deal Lucie's made with Peng Hair is allegedly worth. She'll be promoting sea salt spray because surfer girl stereotype.

A spokesperson for the brand said: "We are ecstatic to have signed Lucie to endorse our brand.

"Lucie is instantly recognisable with her fantastic surfer look hairstyle and with her laid back approach is a perfect fit for Peng Hair."

Someone very salty is claiming producers don’t air some people

One of the Islanders presumably still bitter about being ditched at Casa Amor told The Sun certain cast members were unfairly "forgotten."

The mystery Islander told the tabloid they were "sidelined" and "favourites" Tommy and Molly-Mae were given more airtime.

A separate source said: "One of the stars of this series feels angry towards some of the other Islanders and they're threatening to expose the truth when their contract with ITV finishes.

"They say that arguments involving certain popular stars were not aired to keep them on the show while the cast of Casa Amor were forgotten about.

"This person says there are some fake couples and thinks it's time for the fame-hungry and fake stars to be outed."

Danny and Jourdan have moved in together

Isn't it strange how Danny was actually in the villa for a long time but is still super forgettable? Anyway he and Jourdan have moved in together to save rent/solidify their love for each other so well done them.

Just want to say the biggest thank you ever to this queen ? gone out of her way, above and beyond to make sure I had the best possible birthday – couldn’t be more grateful to have met you, angel ? – Separate thanks to @y_spa as well for taking care of us ??

A source told The Sun: "They spend all their time together and are head over heels for each other.

"They have found a home and they're moving in together as soon as they get the place sorted. They're obsessed with each other. It's going so well."

ITV shared a compilation of Islanders mimicking the classic Caroline strut into the villa and it has proved none of them are remotely funny.

They talk the talk, but can they walk the walk? ?@LoveIsland #LoveIsland @CarolineFlack1 pic.twitter.com/KgPmFjUibd

I mean look at Lucie's attempt. Just look at it.

Maura’s been in Grazia which is very lovely

Grazia did a proper deep dive into Maura Higgins's psyche this week, and even put her on the front cover to boot. It's implied in the first line she was asked to turn down her "sex eyes".

In this week’s Grazia; #LoveIsland’s @maurahiggins opens up about being misjudged in an exclusive interview, #VictoriaBeckham on why she’s taking control of ‘second chance’ USA move, and the secret to #KateMoss’ fail safe #summer style. Only in this week’s Grazia – on sale TUESDAY! ?

Maura told the interviewer she's been "misjudged" all her life, she doesn't "actually care" what others think of her, and she "didn't realise" she was a feminist.

She also said she doesn't read what's written about her, which probably explains why she didn't know she was a feminist, because we called it ages ago.

Bella was hanging out with Joanna in her car answering questions on the latter's Instagram.

Asked about the seat belts in her car, Belle said: "Yes absolutely they are Gucci seatbelts. This is a Gucci Fiat 500 – zoom in on that headboard please."

Dani Dyer knows how she wants to be proposed to

Amazingly making it into the prestigious Stella magazine in The Telegraph, Dani said she expects her boyfriend Sam to propose within five years.

She said: "We had a few dates when we were teenagers, but he’s always been this lovely solid guy.

And here I was thinking she wanted to be proposed to in the fish tube.

Molly-Mae has denied having extra therapy after leaving the villa

In the aforementioned interview with OK! Magazine, Molly-Mae addressed rumours she was undergoing extensive therapy to deal with the hate she received during her stint in the villa.

She said: "I’ve been having the same after-care as everyone else.

"I’m so happy, nothing can burst my bubble; what the public think is irrelevant."

Are Yewnade and George seriously going to be a thing???

Let's not get ahead of ourselves. George commented something vaguely flirty on one of Yewande's Instagram posts. 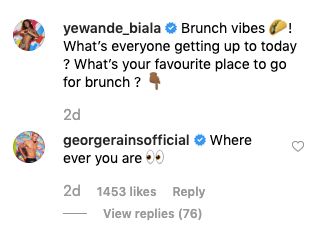 As you can see from the above photo, George's game is quite poor. But that hasn't stopped people speculating: 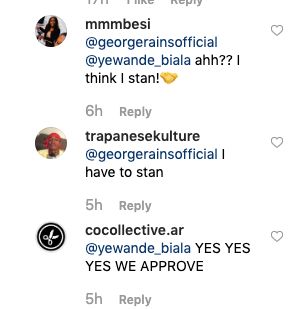 Obviously this doesn't actually mean anything (none of this does). But the true treasure in the comments is this but of bumlicking from Lavena "we gon' steal yo' man" Back:

Yewande and Lavena were never in the villa at the same time. Pour one out for Lavena.

Remember when Tommy sang The Climb by Miley Cyrus and then her and Liam Hemsworth divorced like a month later? Clearly Tommy wants some misery to befall Fergie in September because look at the absolute state of this:

In perfect 2018 style, the BooHoo.com tweet describes it as "a mood" even though it is evidently just really bad.

#TragicSponConWatch: Sherif now sells ‘it is what it is’ t-shirts

Oh dear. After missing the afterparty to plan the launch of his clothing line, Sherif has finally "dropped" a new t-shirt baring the slogan "it is what it is". Regarde:

?DROPPING SATURDAY ? ✣ IT IS WHAT IT IS“ Graphic Tees releasing this Saturday 17th via @slgarms 3PM. Project inspired by my time on the island, collaboration with @sarjoey to bringing my vision to life! ✣ ISSUE #1 : Limited & exclusive stock, first come first served so GRAB whilst you can! Next issue is sooner than you think ? #IIWII

As you can see, the t-shirts certainly exist. Sherif credits Sarjoey for "bringing my vision to life" which probably overstates how much input Sherif actually had but it is what it is.

• Lucie finally explains what’s going on in THAT weird video