The drama will never stop

Belle's dad pulled strings to get her on the show

Belle has said her dad helped her to get noticed by the Love Island producers. This comes after it was revealed that only six Islanders actually applied for the show and went through the full applications process.

She told Closer Online: "I had a conversation with my dad and he asked me if I wanted to do the show. I didn’t really think much of it and before I knew it one of his friends [got me in contact] with someone at ITV and then I did the audition and started the application process."

Anna has been pictured next to suspicious white powder

Anna posted a picture of her on a night out with her sister on Instagram. In the comments people have noticed white powder on the table, and obviously have gone wild for it. 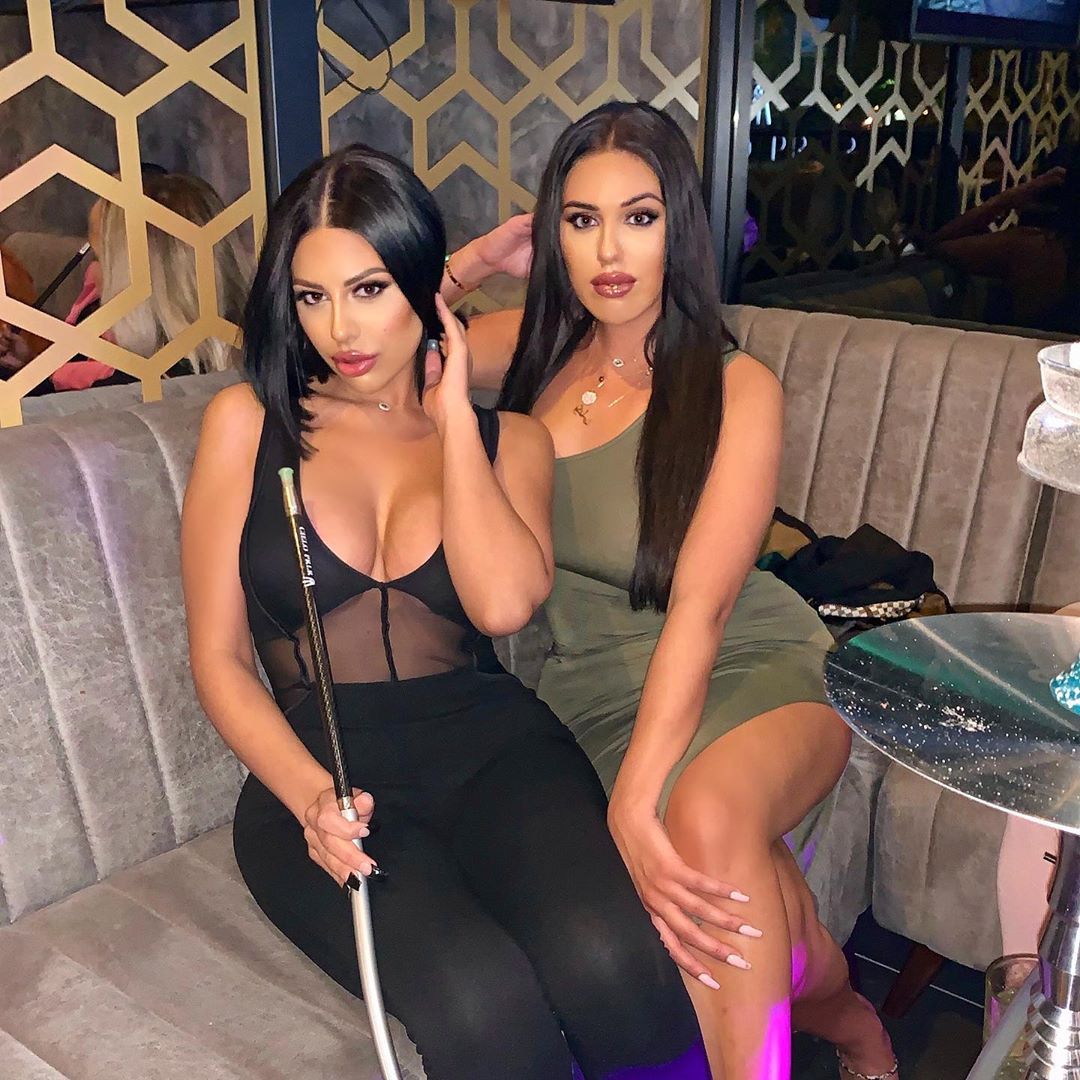 One comment said: "That powder on the table ???", another said "Lines all over the table?" and another quite straight to the point asks "quick question why do u have cocaine on the table".

However, The Sun Online are claiming they can exclusively reveal (of course) "that the white powder is actually ash that has been blown onto the table from the shisha coal." Thank you, The Sun! I had no idea!

In an interview with Her magazine Maura has said that given the chance, she would love to unfollow Jordan on Instagram.

Michael got his car clamped looool

Earlier this week Michael went out with a friend and when they arrived back at their posh af Mercedes, it had been clamped.

According to The Sun, who got some incredible snaps of the clamped car, it's worth £35,000 and was seen with a yellow clamp on its front left wheel and a fine on the windscreen. Michael was also pictured trying to look cool and walk away like nothing had happened.

Amber is going on Dancing on Ice!!!

According to The Sun, Amber Gill has signed up for the new series of Dancing on Ice on ITV!!!

A source said: "The Dancing On Ice casting team are delighted with the decision to snap up Amber.

"Love Island contestants always do really well on the series as they are still fresh in everyone’s minds. Amber is a stunning girl and they know she’ll look fabulous in all the sequinned costumes. She has a gutsy personality, too, so will make excellent viewing."

Jucie 2.0 could be a thing as Joe and Lucie have been spotted out with her family in Cornwall.

Lucie and Joe with Lucie’s family in Cornwall

According to Cornwall Live onlookers said: "They seemed close and very relaxed with each other, chatting and laughing, but there were no displays of affection.

"The restaurant has blankets for customers to use, and when Lucie started to get cold later on, Joe was a true gentleman and got one for her, wrapping it around her shoulders.

"People asked them for photos, but they insisted on taking them separately, so it seemed like they didn't want to be photographed out together."

Maura had her first day presenting on This Morning and she was great!!!

On Wednesday Maura started her new gig as an agony aunt on This Morning. And people have said she absolutely nailed it!! Twitter went wild for people complimenting her and I am completely here for this becoming a regular thing.

Wow, she smashed it! Can't wait for Maura's next appearance on This Morning. ?

Tbh, sometimes you need someone to brutally asking you "IS HE JOKIN" and tell you "OF COURSE HE DUSSNT" love you.

Lucie has done possibly the WORST spon-con video ever

If you thought Georgia Steel's most tragic spon-con ever post was bad, you've seen nothing yet. Enter: Lucie Donlan. Seriously, watch it and try not to cringe so hard you think you might die.

Why is Lucie the Liz Truss of love island pic.twitter.com/GhGSOyG4bM

In an interview for Heat Magazine’s Love Island Under The Duvet series, Anton and Belle revealed Islanders had a few McDonald’s deliveries to the villa.

Belle said: “We had a few of them, we needed that. I had a few chicken nuggets here and there.”

Viewers had spotted a McFlurry in the fridge before, and apparently the deliveries were to "boost morale" in the villa. Tbh, same. 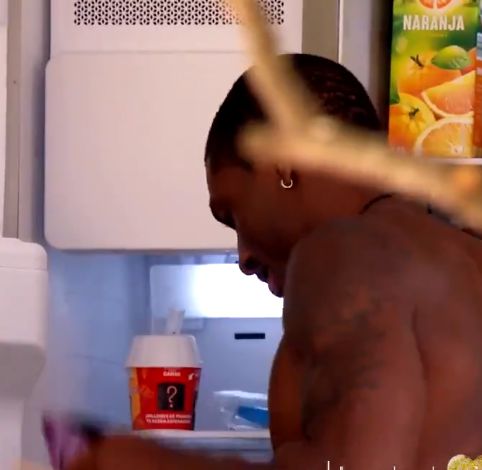 And they also had a secret language to hide their chats????!!!

In the same interview, Belle and Anton said the Islanders came up with their own language so they could talk about things they aren't usually allowed to.

It's no secret there are topics of conversation the Islanders are banned from talking about. But Anton said they came up with a way to get around it. He said they would grill new bombshells about the outside world without the producers knowing what they meant.

As well as this, the main thing they always wanted to know was how many followers they'd all gained on Instagram. I expected nothing less from them.

Belle said when she entered the villa: "[Anton] taught me our own language to try and get it out of me. And I kept saying to him, 'If you keep asking me about your follows I'm going to have to move out.'"

Anton said: "Everyone was so obsessed with it. All of us are always on our social media and when it's taken away from you you're curious about what's going on."

Belle and Anton in the interview

Love Island fans have become convinced there was some sort of secret feud between Anna and Molly-Mae when they were in the villa.

This started when Anna was seen liking memes on Twitter that mocked Molly-Mae's stuffed toy Ellie Belly (lol). And now in a Q&A on her Instagram, Anna has said she "will be friends with almost everyone in the villa" when she was asked about toxic friendships.

What does "almost everyone" mean, Anna?!

We all remember what went down with Amy and Curtis in the villa. How could we forget? BBC's Radio 1 presenter Chris Stark thought it would be a great idea to ask listeners: "Would you like the chance to be dumped by Curtis from Love Island?". Which is just awful really.

Chris put a call out on Twitter for people to message him about the chance to get dumped. Amy posted the tweet on her Instagram and said: "I'm all for a laugh but I just feel that trivialising something that so many people resonated with and turning it into a laughing matter isn't entertainment." 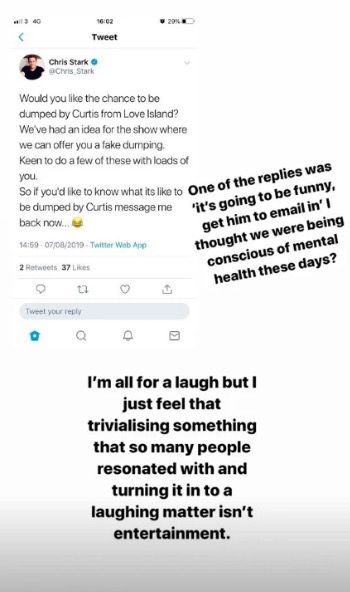 Yes, you did read that right. Jack Fincham was meant to have an interview on This Morning with TOWIE's Lauren Goodger, but neither of them showed up after a "boozy" night at the Celebs Go Dating wrap party.

This Morning host, Eamon Holmes, said: "It was the wrap party last night, and Lady Colin Campbell is the only one who turned up right now."

Lady C, who is also on Celebs Go Dating right now, added: "I saw them when I was leaving, and I did say to Jack I’ll see you tomorrow.

"Some people are like Oscar Wilde, they can resist anything but temptation. I think they both. Two word, rumpy pumpy."

Curtis' interview on GMB was nothing short of toe curling

It seems every news outlet has reported on the fact Curtis said he’d be open to a relationship with a man, but Curtis has said time and time again he doesn’t like labels. He was asked about this on Good Morning Britain and the interview was awkward AF.

The hosts have been accused of "forcing" Curtis to say he was bisexual, and the interview seemed more like an interrogation than a straight forward Q&A.

‘I never want to label what the future is going to be because I don’t think anyone can really ever do that.’#LoveIsland's Curtis Pritchard addresses rumours about his sexuality. pic.twitter.com/RsAPJxo6sY

Wait, Tom and Lavena are dating?!

If you need a quick reminder (same) Tom is the one that wondered if Maura "was all mouth" and Lavena is the girl from Casa Amor that said the new girls had come to "steal yo man" and then was never seen again.

But anyway, apparently those two are now dating!! The pair were seen enjoying a romantic Italian meal for two at Vapianos in London. A fan spotted them and tweeted about it:

Hello, remember the girl that went into love island saying she was going to take everyone’s man, and wasn’t chosen in Casa De Amor?

And the guy who pissed off Maura with that comment?

Chris and Harley went on a cute date to Alton Towers

After saying in the villa he would take Harley to Alton Towers for their first date, Chris has done exactly that! This week they both shared on their Instagram stories all about their trip to the theme park together. They even stayed overnight in a Peter Rabbit themed room. Adorable. 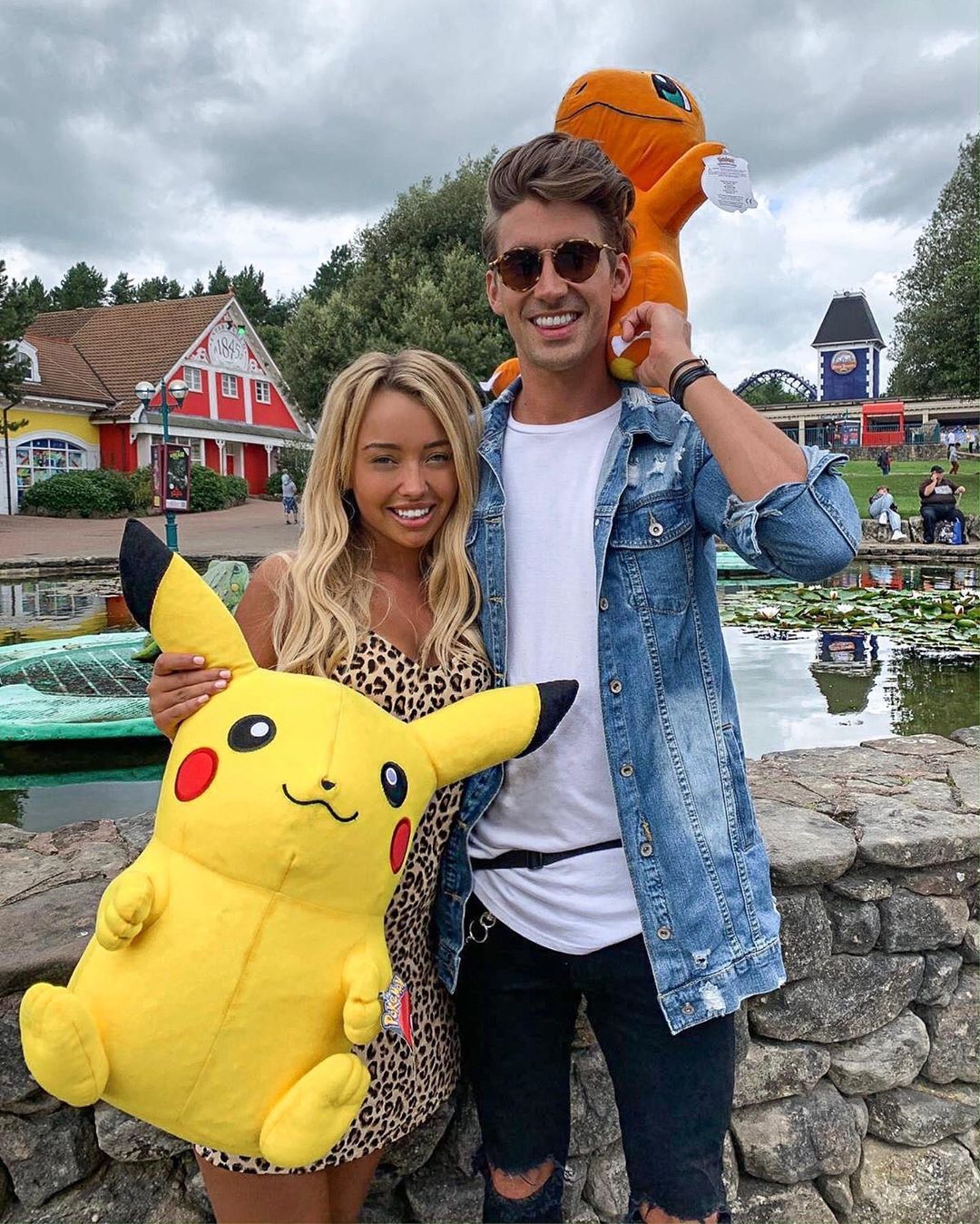 Jack Fincham isn't sure if he ever really loved Dani Dyer

He said he "didn't know" if he was ever in love with her and admitted they had rushed moving in together. He said: "I let her rush me a little bit. We had a genuine connection in there and I think anyone can see that. Honestly, and I mean this, I wish her all the happiness in the world."

Here is even MORE Love Island gossip for you to feast on:

• Love Island Gossip Column: Which Islanders are now dating?! And Ovie is becoming a TV chef!!