In the latest meme to divide everyone, people are being asked where they are sitting in a lunch cafeteria. Which might sound quite fun and easy, and it mostly is. But the where y'all sitting meme is also a huge decision and says a LOT about you.

How do I chose if I want to sit with Harry Styles or Channing Tatum more? I just want to enjoy my lunch in peace, I don't need such difficult decisions.

If you're really confused by what the where y'all sitting meme even is, don't worry you're not alone. Here is an explainer on everything you need to know about the challenge.

Where y’all sitting? Sticking with your own zodiac sign or sitting some where else??? pic.twitter.com/B36UfUaZMq

What is the where y'all sitting meme and what does it mean?

The where y'all sitting meme is quite a simple concept. Someone posts a photo of a lunchtime cafeteria scene and each table has different people or things from a certain topic "sat" around it. It then poses the question: where are you sitting? I.e. Which of these things are you choosing?

Where you decide to sit determines which you like the most or what you agree with. This may sound easy, but some of the decisions that come with this meme definitely are not.

Where did the meme start?

According to Know Your Meme, the origin of the meme challenge was a tweet sent last week.

The site says: "On July 30th, 2019, Twitter user @journalsfire posted one of the earliest known cafeteria table edits and asked, 'Where are you sitting?' The tables were labelled with various Justin Bieber songs." 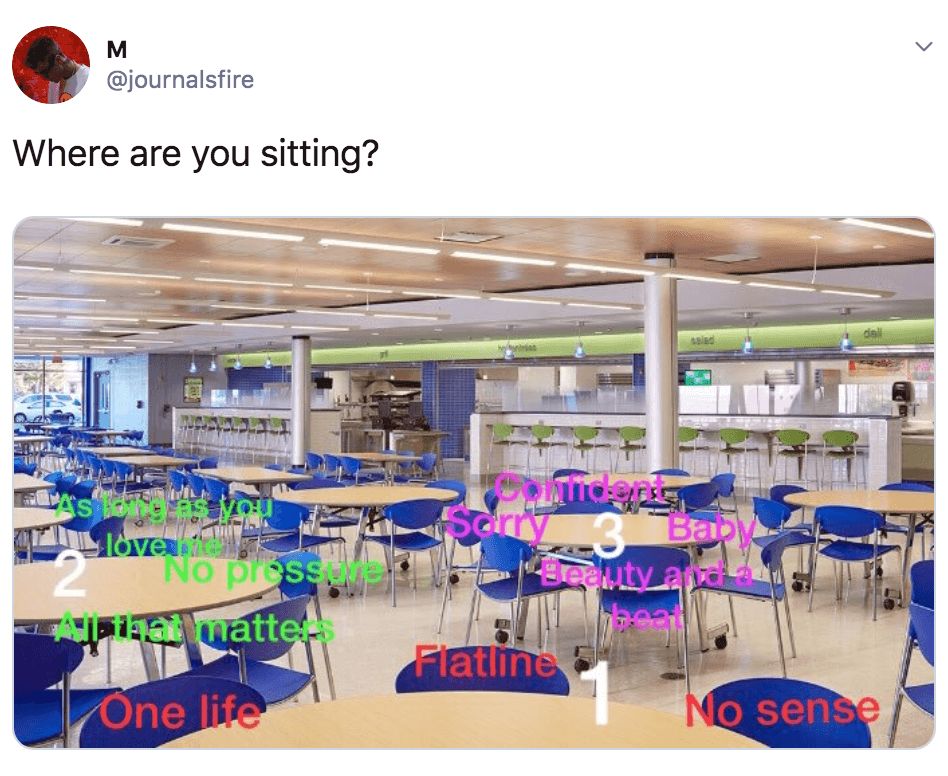 This version of the where y'all sitting meme basically asks people what their favourite Justin Bieber album is, by asking them which one they would choose to sit with.

If you still don't understand the meme, maybe these examples will help explain it in some context.

1. Tell me, how are you meant to choose between this line up?

where you sitting at? (white mans whore edition) pic.twitter.com/tCasLWjOpi

2. How can you choose between MEMORIES?!

3. This is a toughie

Rom-com fans, where y'all sitting pic.twitter.com/JCVaSrqAIj

4. I would LOVE to eat a sandwich with all of these women

okay girls and gays, where are you sitting? pic.twitter.com/SO38XcqkyI

5. Imagine having lunch with Beyonce and Rihanna though

STAN TWITTER
comment where you're sitting!
(this is take two: a broader one to appease the butthurt fans who got offended that their fave wasn’t included in the first one) pic.twitter.com/EYUVXzMCSF

7. It's table number one for everyone surely?

8. I'll sit in the bathroom please

ok got stans, where are you sitting? pic.twitter.com/nZolMSfzU3

9. With Amber and Greg but close enough to turn to Ovie too, obviously

Which table would you go sit at? 🤔🍽@LoveIsland #LoveIsland pic.twitter.com/OKQawFtN1u

If you want to give it a go yourself, here's the blank version to make your own up

• Why is everyone on Twitter talking about 30-50 feral hogs?

• These are the wildest examples of people texting their ‘number neighbour’