It’s all a big FIX

The finalists all arrived back to the UK today after producers reportedly gave them a tutorial covering post-villa fame and finance management.

Look who we just flew home… 💛🏝 The #LoveIsland 2019 WINNERS @amberrosegill & @gregoshea and all the FINALISTS 😍 Tag someone who’ll be as excited as we are! #Jet2

The islanders arriving back 🏠 !! X

The islanders have touched down in the uk!📍 #loveisland •Tag your friends! Check amber at picture number 4 😂

Greg also posted a pic of him and Amber chilling in a London hotel room: 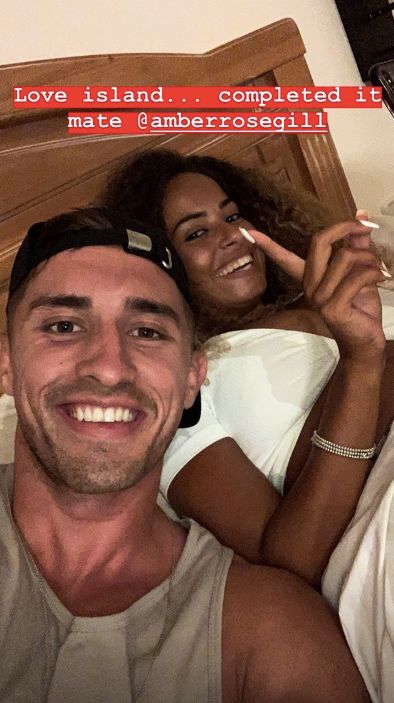 A more detailed description of what happens to the Islanders when filming finally wraps can be found here.

We last saw Millie Roberts claiming her and Tommy had been together three months before Love Island started, despite Tommy maintaining he'd been single 10 months before the show.

During the final, Millie could be heard celebrating Tommy and Molly-Mae's near miss of the prize with a glass of champagne:

Tommy’s ex girlfriend is an absolute legend for this 🤣🤣🤣🤣🤣🤣🤣 pic.twitter.com/Tr9254Ybui

Meanwhile, Greg's rugby 7s teammates, some of whom were later at the airport to welcome him home, celebrated his win in a pub by going absolutely fucking mental:

One of Anton's mates spoke to The Sun to tell them Anton unfollowed Molly-Mae the moment he got out of the villa. Apparently he thinks Tommy and Molly-Mae "tactically" voted them off – if they hadn't Belle and Anton would have made the final.

The pal said: "One person who is pleased that Molly-Mae didn't win the £50k is Anton after she decided to vote him off.

"He unfollowed her as soon as he left the villa and has been telling friends he doesn't like her at all and neither does Belle.

"Both him and Belle say it’s down to Molly that they missed out on the final – they are convinced she was tactical and eliminated them because she felt they were a threat to them.

"They had a good chance of winning but it was ruined for them because of Molly."

Only six of the 36 Islanders went through the application process

According to Sky News, Love Island isn't actually considering many applicants, which will either leave you shocked or non-plussed depending on how cynical you are.

Despite more people applying for Love Island than Oxbridge, producers still hand-picked all but six of the Islanders from a pool of Insta-famous model-types they already have on deck. ITV hasn't revealed which six Islanders went through the process, although we know Amy was one of them.

3.6 million tuned in to watch the final

ITV has confirmed 3.6 million people watched the final. This might not seem like too much (after all, over 20 million watched The X Factor final at its peak), but Love Island is the most popular show among 18-34s, so that's some juicy advertisement bread.

Amber and Greg have started giving interviews now they're out of the villa. Amber told The Mirror: "I’ve been told that a ­million times. I think everybody wants to marry him. My mam ­definitely wants me to marry Greg."

❤️👑 THE PERFECT COUPLE 👑❤️ Remember to vote for Greg and Amber TO WIN!!! Voting is free and available on the app! PLEASE PLEASE PLEASE. IT TAKES 30 SECONDS TO VOTE! #Loveisland

She continued: "I think the journey I went on a lot of girls could relate to.

"He came in when I needed a gent and I feel like that’s why it went for us."

"Amber’s been through a lot more than me, so I can only be appreciative."

Caroline Flack has signed a £1.2 million contract with ITV, tripling her salary.

A source told The Mirror: "Caroline negotiates a good deal. She drove a hard bargain. It is thoroughly deserved and she is highly valued at ITV.

"Her fee for two months each year was £450,000 plus expenses but she’d only agree to commit to both series with a massive pay rise.

"She has really risen up through the ranks at ITV and is a hit on Love Island.

"She’s part of the ­furniture – the show wouldn’t be the same without her."

Remember when Curtis turned down Maura's advances? Well now Maura's explained why that happened. Speaking to The Sun, she said: "I think it was more about keeping people awake.

"Curtis knows how loud I am!"

Maura later told the tabloid the couple haven't had a chance to do the deed yet, but added: "I am sure we will get it done." Yeesh.

After spending less than a fortnight in the villa, somehow Greg was handed the £50k at the conclusion of Monday night's final. Fortunately for Amber, he decided to split it, but what would have happened if Amber had been given the choice?

According to Michael, she'd have taken it for herself. He told The Sun: "I low key thought if she gets it she might steal it but nah, nah, nah she was always gonna split it anyway.

Obvs he wasn't being serious and was just making what we call in the business "a shit joke." Well done Michael.

The series three alumna told The Sun Curtis reminds her of Chris Hughes, saying: "I feel like he will play the game to absolute perfection while he’s in there.

"But I think that Maura will see the real Curtis when she leaves, like how I saw the real Chris."

She'd managed to blag her way to the Love Island final party, and later told the tabloid some boys "are just really good at knowing when they’re on camera or in company."

They can copy the recipe, but it will never taste the same 🍏

She added: "The danger of Love Island, when you come away from the camera and you’re alone in the hotel room, in London, no cameras, and you first see the real them, you’re like wow, it’s kind of a shock."

Molly-Mae told The Mirror her and Sherif hadn't had the chance to chat about when he kicked her, which led to his early exit from the villa.

Asked if she had beef with Sherif, she said: "Erm. Absolutely not. No beef with me and Sherif.

"I’ve not even spoken to Sherif. There’s absolutely no beef with me and Sherif. Love all the boys to pieces."

Remember Chris? Of course you don't. This is him:

Chris was on Good Morning Britain this week to chat about post-villa craziness, and revealed he was "too scared" to check his social media.

Asked what he did when he got his phone back, Chris said: "I called my mum. I didn't look at social for about two days, I was scared."

Anna, who was on the sofa with him, said: "He didn't turn his phone on." Poor little lamb.

The reunion is this weekend… are you excited? Wait no come back

To answer the obvious question: No, this isn't the episode where they all go to a mansion and have a weird sleepover after yelling at each other for half an hour.

Instead, the cast will be reuniting with Ian Stirling and Caroline Flack in front of a live studio audience. The show's on Sunday at 10:35pm.

Look, we've spoken before about how bad it is when traditional newspapers roll out their microwaved takes on Love Island, so let's just cut to the chase with the top three:

1) The Guardian: It's a national disgrace! How Love Island lost its heart

Cringiest line: "This year’s Love Island gave up the pretence of being a show about love, and in so doing exposed the British public in all its headstrong, obstinate glory."

2) The Independent: Historians of the future will be rightly appalled by this reality dating show

Cringiest line: "Love Island is a sobering counterpoint to the great political and social shifts of our times. In the age of woke and #MeToo, here is a world that perhaps reflects a more unwelcome truth about the sexes as we enter the second decade of the 21st century."

3) The Times: Love Island’s lesson in selling your personality

Cringiest line: "It’s difficult, though, to do authenticity. To try to be authentic, as Sartre noted, is to fail."

(The Times wins points for being the only one not to mention Brexit or use a hashtag in an attempt to be #DownWithTheKids.)

To celebrate the end of Love Island, here are the best columns from when the show was on:

• Love Island Gossip Column: Joe is charging £1 for selfies?!! Plus Callum and Elma went on a date!

• Love Island Gossip Column: Elma lied about her age?! And producers tell Amy off for bullying