London Met, Goldsmiths and University of Kent have the worst BME attainment gaps

Two thirds as many black and minority ethnic students received firsts compared to white students in the last academic year, The Tab can reveal.

33 per cent of white students received a first in the academic year 2017/18, compared to only 22 percent of BME students, according to data provided to The Tab by HESA.

The BME attainment gap is nothing new. But it’s a problem so widespread that the director of one university has said “we are failing a generation of students if we don’t act now”. 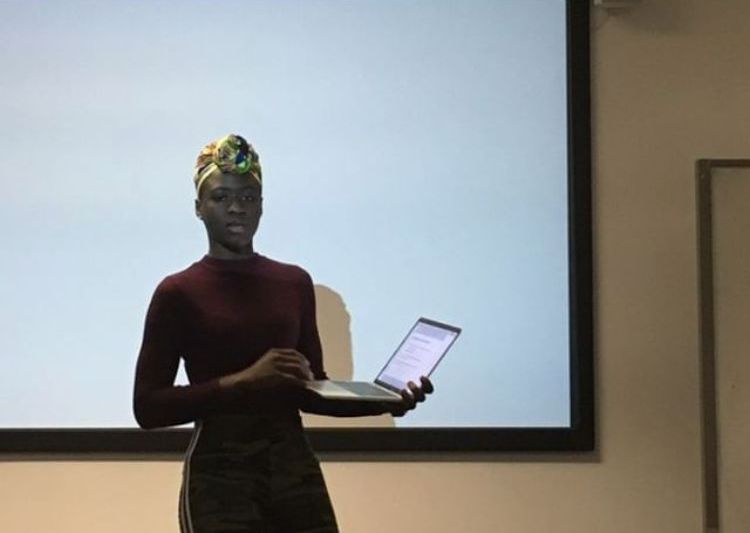 Out of the 49 universities The Tab has obtained data on, 31 have an attainment gap between white and BME students receiving a first of over 10 per cent. The average attainment gap is 11.17 per cent.

Coventry (16.9 per cent), University of Nottingham (15.8 per cent) and Sheffield Hallam (15.1 per cent) also fared badly for their attainment gap.

Oxford and Cambridge appeared to have a lower than 10 per cent attainment gap.

However, of the overall 24 Russell Group universities in the UK, 11 had an attainment gap of 10 per cent and over. Some of the universities with a large gap included University of Birmingham (14.9 per cent), University of Sheffield (13.5 per cent) and Warwick (13.1 per cent). 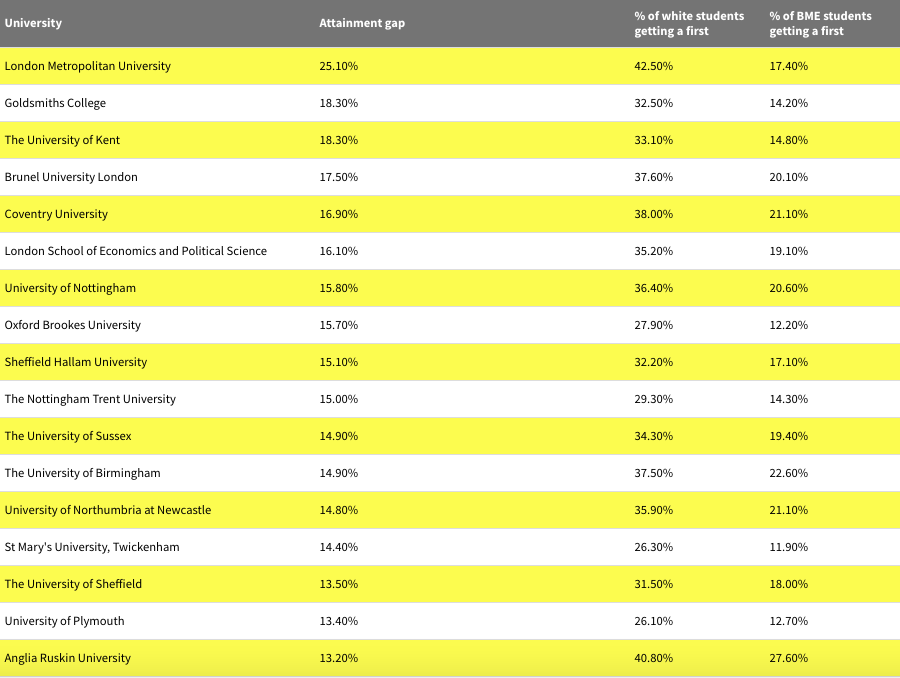 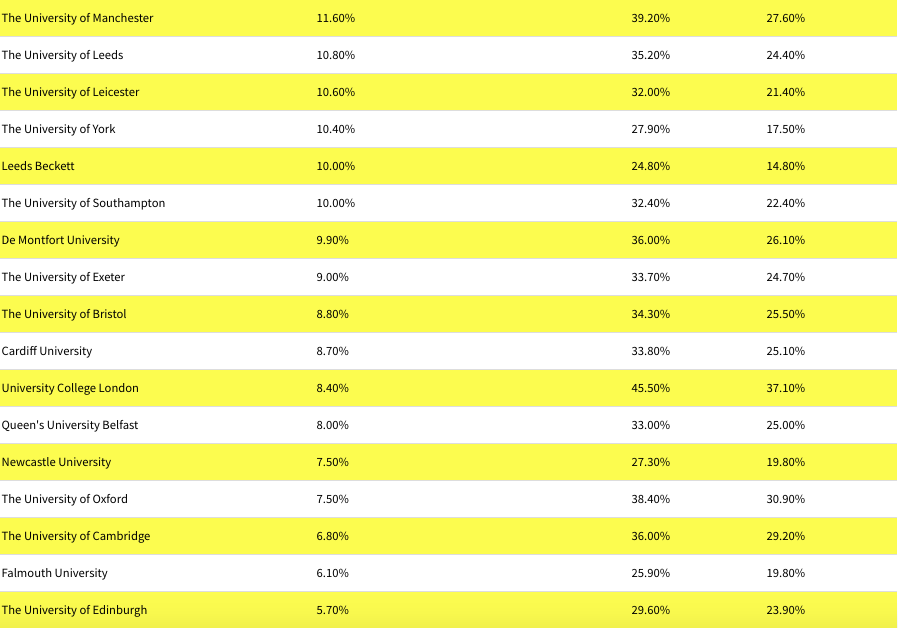 The data was obtained from HESA and it measures the proportions of UK domiciled BME and white students awarded a first in the 2017/18 academic year. The calculations exclude unclassified degrees( for example, medical degrees), and students who have not disclosed their ethnic origin.

The Tab submitted Freedom of Information requests to each of the universities included. Some did not reply, some cited exemptions in order to not release the data publicly, whilst others provided figures different to those given by HESA.

Valerie Amos, the director of SOAS University of London, said in a report on the attainment gap: “Some universities have been slow in recognising the scale of the challenge and in committing to making the changes required. Others have made significant progress in narrowing the gap.” 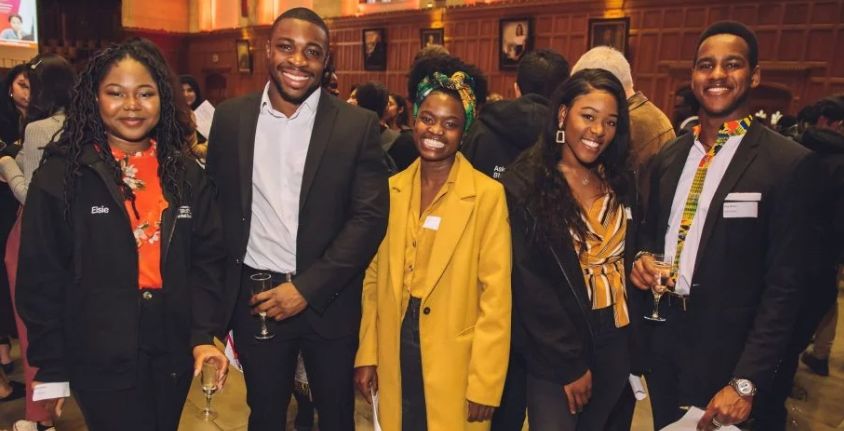 Whilst the figures are stark, the obstacles at university are often easy to identify. Robiu Salisu, Bristol’s Student Inclusion Officer, said that the “greatest challenge for BAME students is arriving at university”.

The lack of belonging that many students feel can manifest across the university, he told The Tab. “This can be either in the space of the classroom where the curriculum is not reflective of students’ identity, to the halls they might be staying in which is not diverse or accommodating of their ethnic or cultural background,” he said.

Despite Bristol having one of the lower attainment gaps – 8.8 per cent – a report revealed that BAME students expressed feelings of a lack of community and inclusion within the university.

Across the country, universities are employing BAME SU officers or reps, implemented widening participation programmes and reviewing the curriculum to try and expose and help tackle the attainment gap.

Kent had the third highest attainment gap – 18.3 per cent – and Kent Law student Joy Olugboyega has been actively involved in the campaign DecoloniseUKC , drafting a manifesto on how to change the university. Joy also co-hosts a podcast, Stripping the White Walls, which interviews academic staff, whilst also addressing the BAME attainment gap and how it can be lowered. Joy told the NUS report: “I would like to see more diversity in staff at the university. There is currently a barrier there, which more diverse staff would help overcome. It helps to see people you relate to”.

What unis are saying

London Metropolitan University had the largest attainment gap of 25.10 per cent.

A spokesperson for London Met said: “London Met has made eradicating all attainment gaps between our BAME and white students a central part of our strategy and we have recently created a role at Associate Pro Vice-Chancellor level to focus on working with students and staff to achieve this. We are proud to have a majority of BAME students and we are determined to ensure that every student realises their full potential at London Met.”

Meanwhile, other unis The Tab spoke to all said they were “committed” or “determined” to tackle the issue.

Warwick told The Tab they have developed a detailed access and participation plan which contains ambitious targets to eliminate their attainment gap and are working closely with the Students’ Union on understanding BME students’ needs and perspectives. Creating an access and participation plan, however, is a requirement of charging £9,250 a year in fees, and something all universities must do.

Manchester Met said they’ve introduced a diversity ambassador scheme which tackles “the causes of differential outcomes for BAME undergraduate students and those from low socio-economic groups, and includes the development of networks among students and staff”.

•BAME students at Bristol are a third less likely to get a first. Meet the campaigners fighting to change that

• Russell Group unis have a serious diversity problem. These are the ones with the fewest BME students