Revealed: How producers warn Islanders the show will change their life

Producers warn Love Island contestants that "nobody may fancy you" before they go in the villa, new documents have revealed.

In a series of warnings to potential islanders, the documents also say that "you could become famous and then find that the public quickly loses interest".

ITV have released loads of Love Island documents to parliament as part of an inquiry into reality TV. With questions over whether the would-be influencers know what they're getting themselves into, these lay bare how people are prepared for the show.

Before the show, Islanders are put in "lockdown" and shut off from the outside world in a hotel to prepare for the villa.

Lockdown "can be a time of increased anxiety". With no access to phones, and a chaperone escorting them everywhere, it's a disorientating period.

Contestants are told to weight things up carefully before taking the plunge. "Participating in the show is not appropriate for everyone and you have the responsibility to work through this decision making process yourself, and in consultation with your close support network, to ensure you feel It is right for you," the producers say.

The forms also include lots of checklists for doctors to fill out about their patients' fitness to go on the show. They're cautioned that: "This experience will test them and put them under pressure in ways that they are unlikely to have faced before.

"Taking part in the programme will hopefully be a very positive experience, but there are potential downsides to consider including press intrusion and negative comments on social media.

"Their appearance, personality, behaviour all may be subject to press /public attention and comment."

'It may not change your life in any way'

However, the starkest warnings are in a "General information regarding your participation" document.

The intro to this advises that:"Your Love Island experience will test you and put you under pressure in ways that you are unlikely to have faced before."

It then goes on to list a series of (quite savage) bullet points titled "IMPACT ON YOUR LIFE". 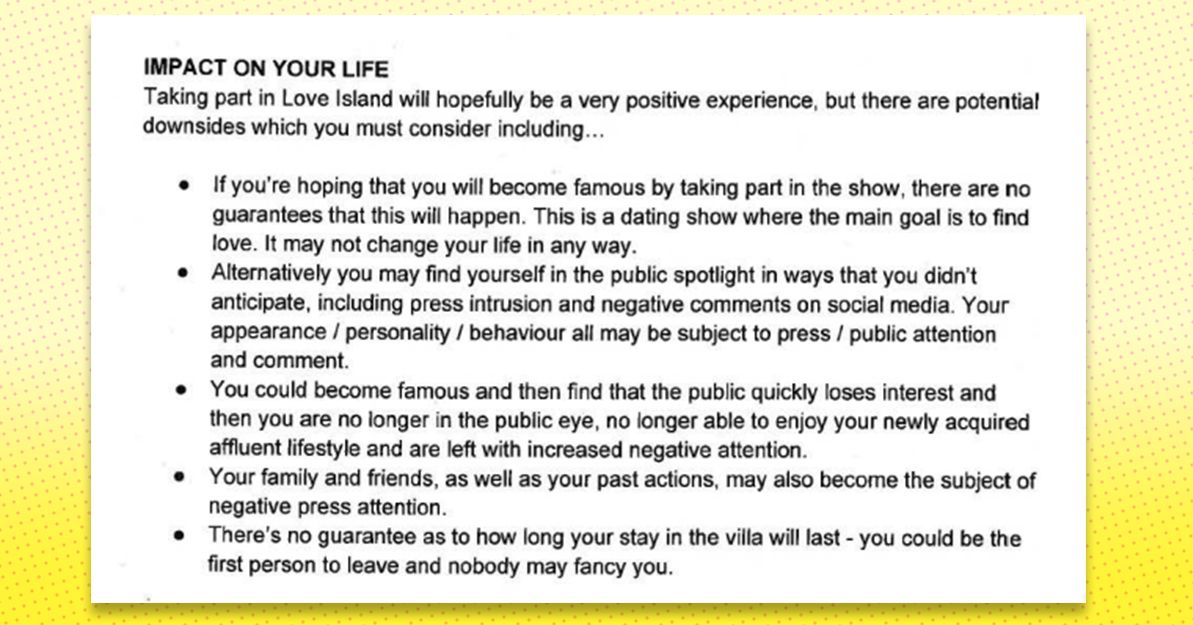 "If you're hoping that you will become famous by taking part in the show, there are no guarantees that this will happen. This is a dating show where the main goal is to find love. It may not change your life in any way."

"Alternatively you may find yourself in the public spotlight in ways that you didn't anticipate, including press intrusion and negative comments on social media. Your appearance/personality behaviour all may be subject to press/public attention and comment."

Such as newspaper front pages asking: "Are this year's crop of Love contestants the TV show's dumbest yet?"

"You could become famous and then find that the public quickly loses interest and then you are no longer in the public eye, no longer able to enjoy your newly acquired affluent lifestyle and are left with increased negative attention."

Last series' villain Adam Collard told The Ringer about one similar experience he wasn't prepared for. At the airport on his return from the Majorca, a woman came up to him and said: "I need a photo for my niece but I think you’re a cunt."

The list also gives the wannabe influencers a bitter dose of reality: "There's no guarantee as to how long your stay in the villa will last – you could be the first person to leave and nobody may fancy you."

Even as the brave new world of Boohoo discount codes and regional club appearances dawns for the Islanders, producers are quick to advise that it might not all be rosy after the villa. 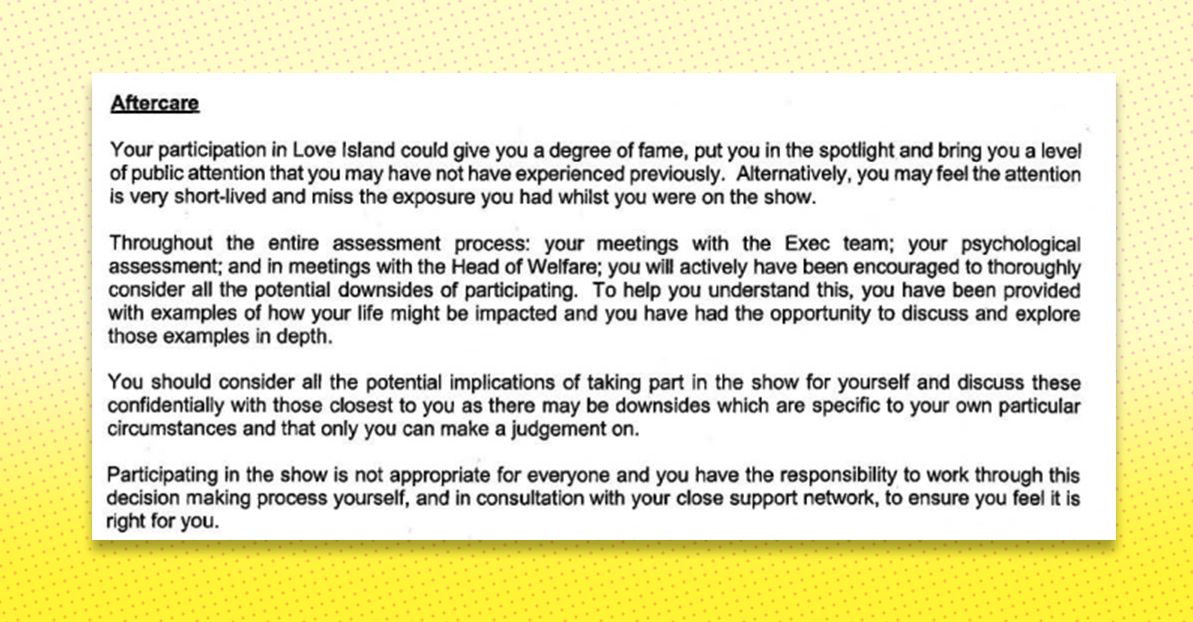 "Your participation in Love Island could give you a degree of fame, put you in the spotlight and bring you a level of public attention that you may have not have experienced previously," they say. "Alternatively, you may feel the attention is very short-lived and miss the exposure you had whilst you were on the show."

Club appearances, adverts, and TV appearances are "likely to increase your fame further still and bring with It additional attention, and both positive and negative consequences, which can't be attributed to Love Island."

The documents have been released as part of a parliamentary inquiry into reality TV, announced after the death of a participant on the Jeremy Kyle Show.

ITV bosses have been answering questions on Love Island, with particular focus on the aftercare procedure after the suicides of past contestants Sophie Gradon and Mike Thalassitis.

• This is the official behaviour document Islanders have to sign