‘You’re fit for a black girl’: What we learned being black at Cambridge

By two grads who’ve written a book on it

At Cambridge, Ore Ogunbiyi campaigned to get her college to return a stolen artefact to Nigeria and led the university's ACS. "You're in this space that for so long hasn't welcomed people who look like you and people from your backgrounds," she says.

Meanwhile, Chelsea Kwakye was the only black girl studying history in her year, but navigating such a typically white space served her well. Understanding "what we mean when we talk about access, an institution, racial politics and racial trauma," she explains. "I don't think I'd even be able to have that conversation and have that vocabulary if I didn't go through the situation like that."

Navigating any uni, let alone Cambridge, as a black student is full of challenges and lessons. After graduating last year, Ore and Chelsea have written a book about it: Taking Up Space. It's the first book to be released on Stormzy's #merkybooks imprint.

The Tab spoke to them about their time at Cambridge, what they learned, and, of course, Love Island. 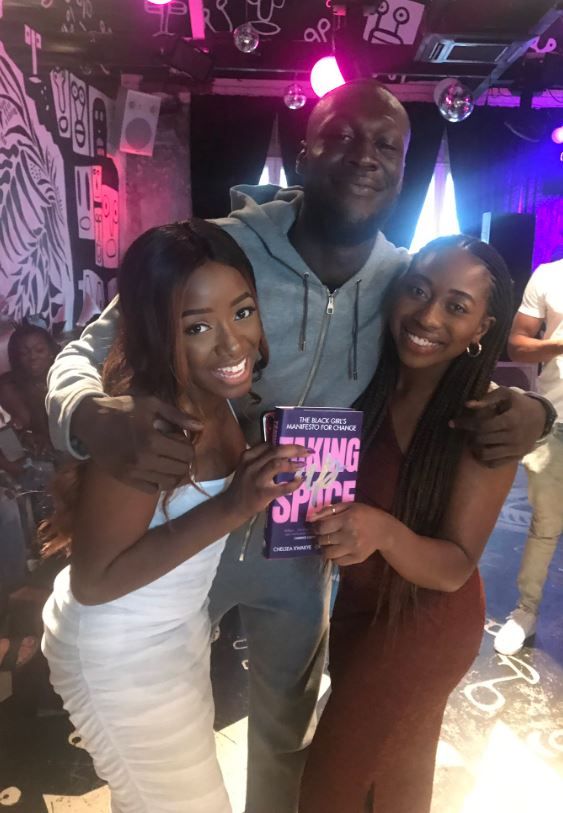 Ore and Chelsea with Stormzy at their book launch

Every year, Love Island comes under fire as black contestants are picked last and fare badly in the villa – a white space. For Chelsea and Ore, this goes beyond a TV criticism, and they say watching Love Island is an uncomfortable reminder of their time at Cambridge.

Ore: "For black girls at Cambridge, this was literally our life. You know you're good looking. You know you've got credentials, you're clever. But you also know that regardless, no one is trekking for you. That was literally what it was with Yewande. She is literally like a mile above the rest of a lot of these girls but still, she's the last one chosen and getting stuck with someone that she didn't really want.

"It's just difficult to watch, because a lot of it is very triggering. It harks back to Cambridge days when you end up being the girls in that space. You have to convince yourself there's nothing wrong with you, even though you know you have all these credentials."

Chelsea: "For me, it was last year when Samira was like to Megan: 'Oh my gosh, I wish I looked like you.' Because Megan was getting one of the guys. I just felt so sad because that is the whole idea of beauty and desirability and how that plays out in society.

"It's just really upsetting. You're always self doubting yourself and questioning: 'Is it you? Is it someone else? Is it society?' And it's a really narrow rope to balance." 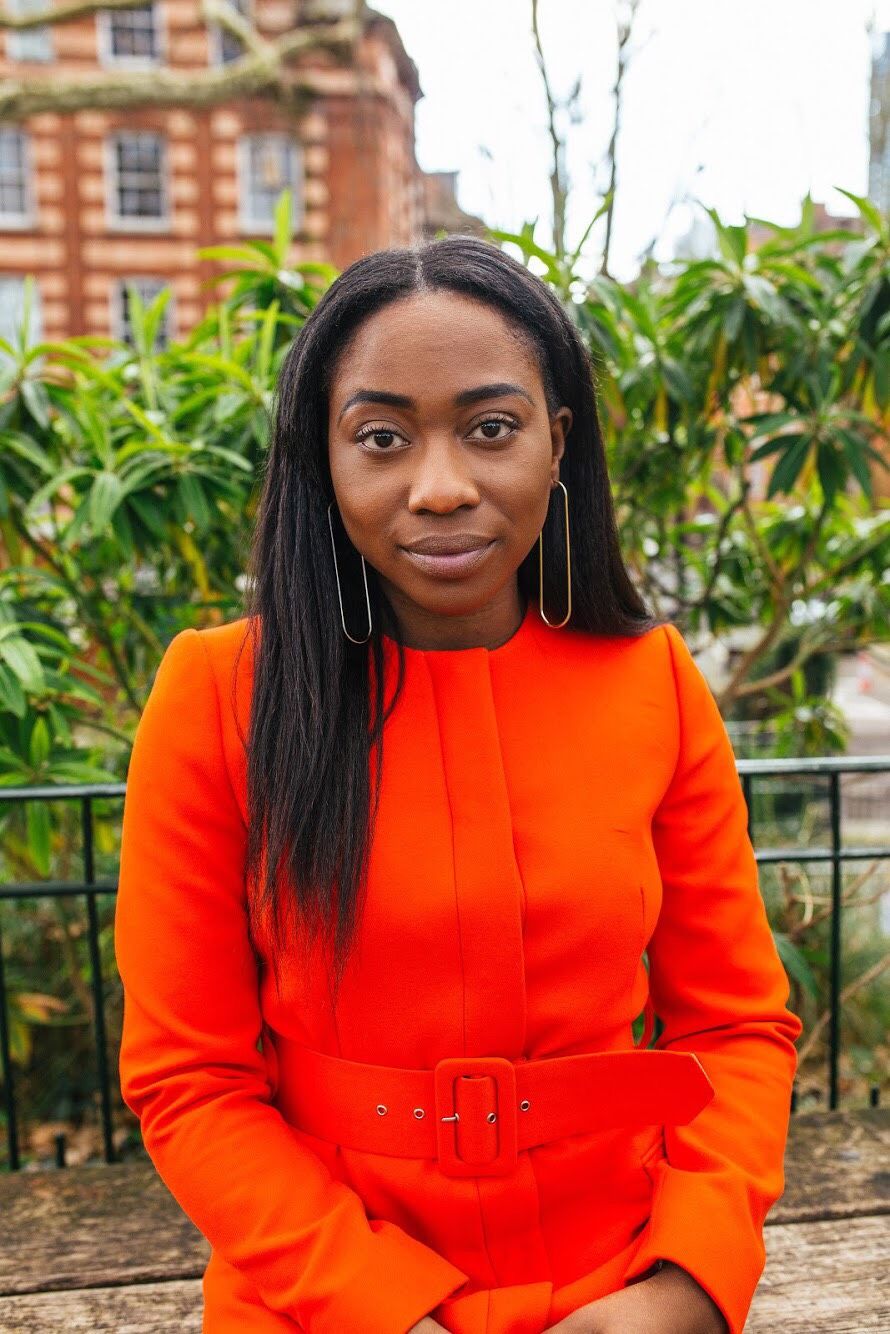 'As a black student, I'm not going to want to see a white counsellor'

Students struggling to access mental health services at uni is nothing new. For black students, there's an added dimension – a lack of BME counsellors.

Ore: "As a black student, I'm not gonna lie, I'm not going to want to see a therapist or counsellor who is white. Because if I'm going to go and explain to the person my experience of racism, they might get it, but it's also very likely that they won't.

"I think it's about things like that, doing more to make sure you're getting black and BME counsellors, and therapists, and people who are available for that support. It's really important." 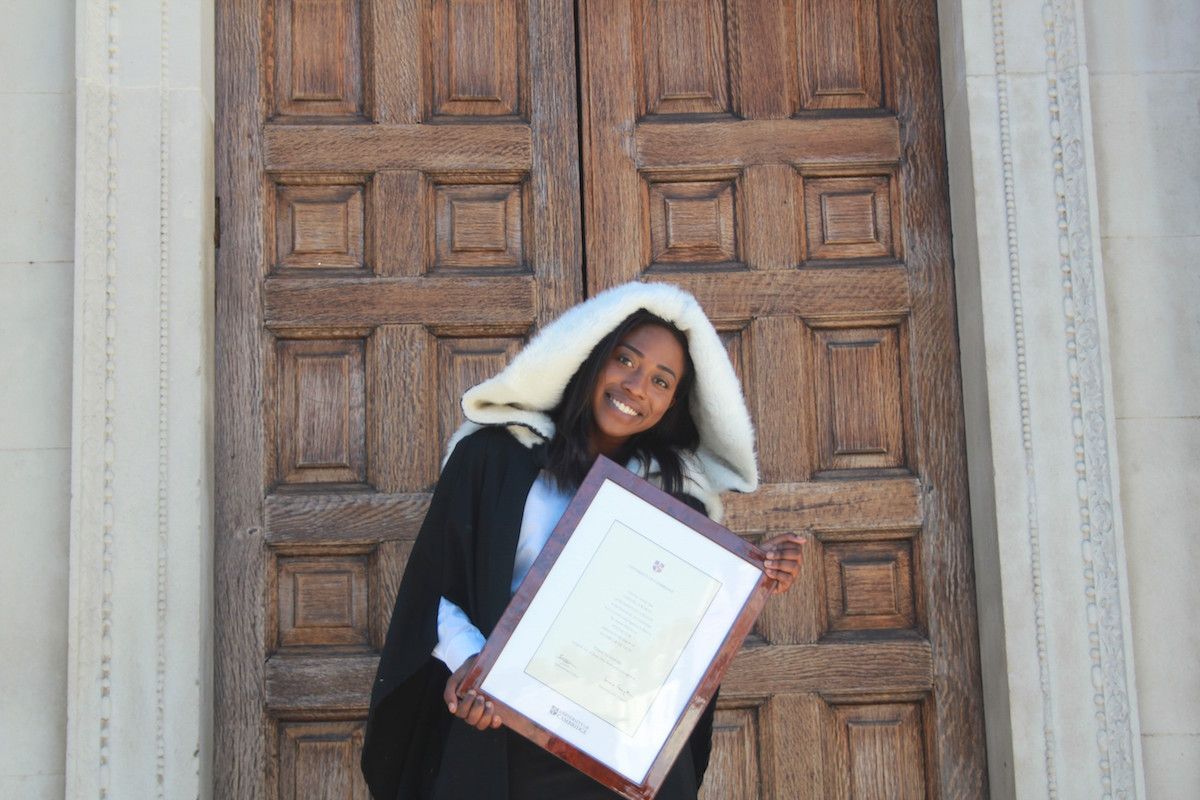 Chelsea at her graduation

Ore planned to do her dissertation on Nigeria's energy sector, but had to decide to drop it when nobody in her department had the relevant expertise to support her. For her, it was a reflection on how the university is still failing to diversify.

Ore: "At a university like Cambridge which prides itself on being one of the best and most forward looking like institutions in the country in the world, than the fact that there's no one who even specialises in anything broadly West African is a problem. Because how big is West Africa? But you have people who specialise in the history of 16th century farming?

"It's just about seeing what people think is academically credible, what people think counts and doesn't count, what is relevant. What people should learn about. And for some reason, West Africa clearly isn't enough on Cambridge's radar for them to even have someone specialise in it and for them to support me in doing the dissertation. So yeah, it's disappointing." 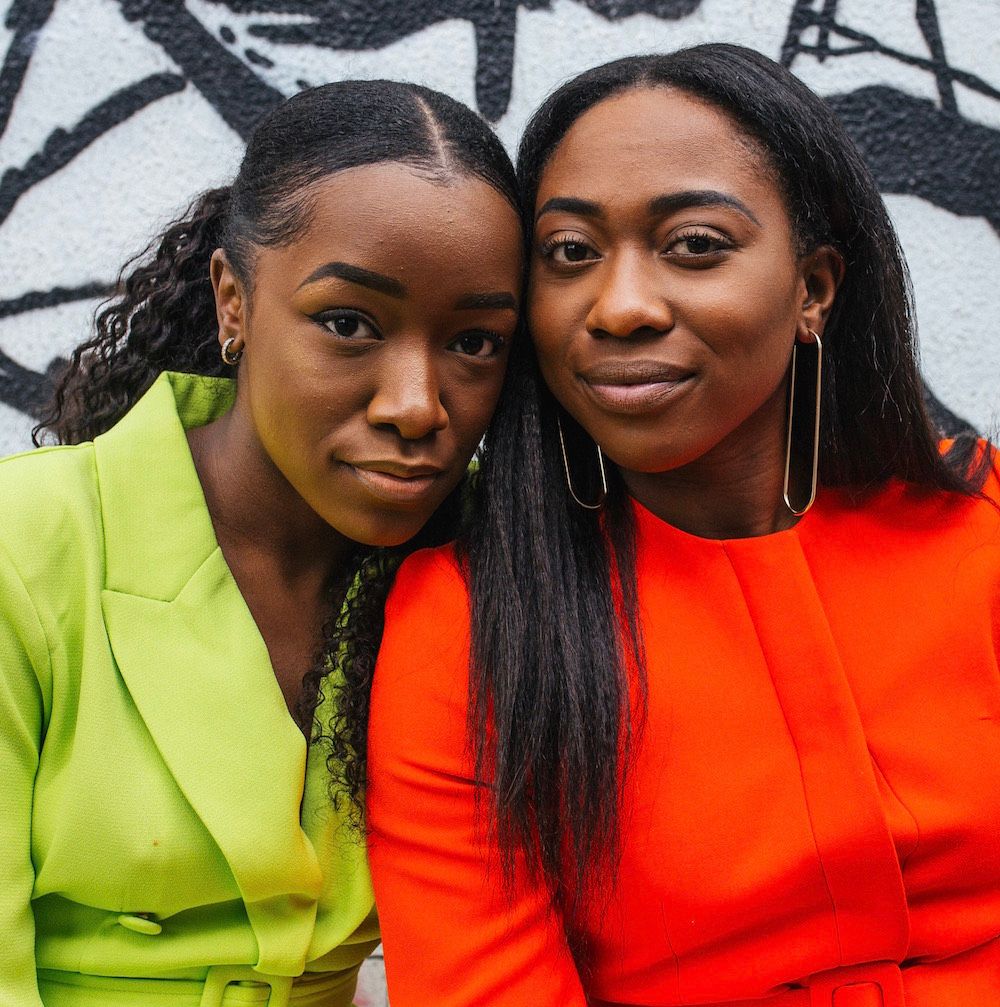 The girls found support from societies rather than the university

When you arrive at Cambridge, everyone's the smartest in their school and gets advice on how to deal with the inevitable imposter syndrome. But were they given advice on how being black would affect that experience?

Chelsea: "When it came to race and how race would mediate the experience there was a colour blindness to it that as a university, they didn't really want to pinpoint that. Because then that's them confronting the issue."

Ore: "The African Caribbean society eventually offered that through, I met people who are in the years above me and could kind of give me that guidance and offer me that consolation. But there was nothing from the university as an institution saying, like, you know what, this might actually be slightly harder for you because you're a black woman, and we are here. And we are listening." 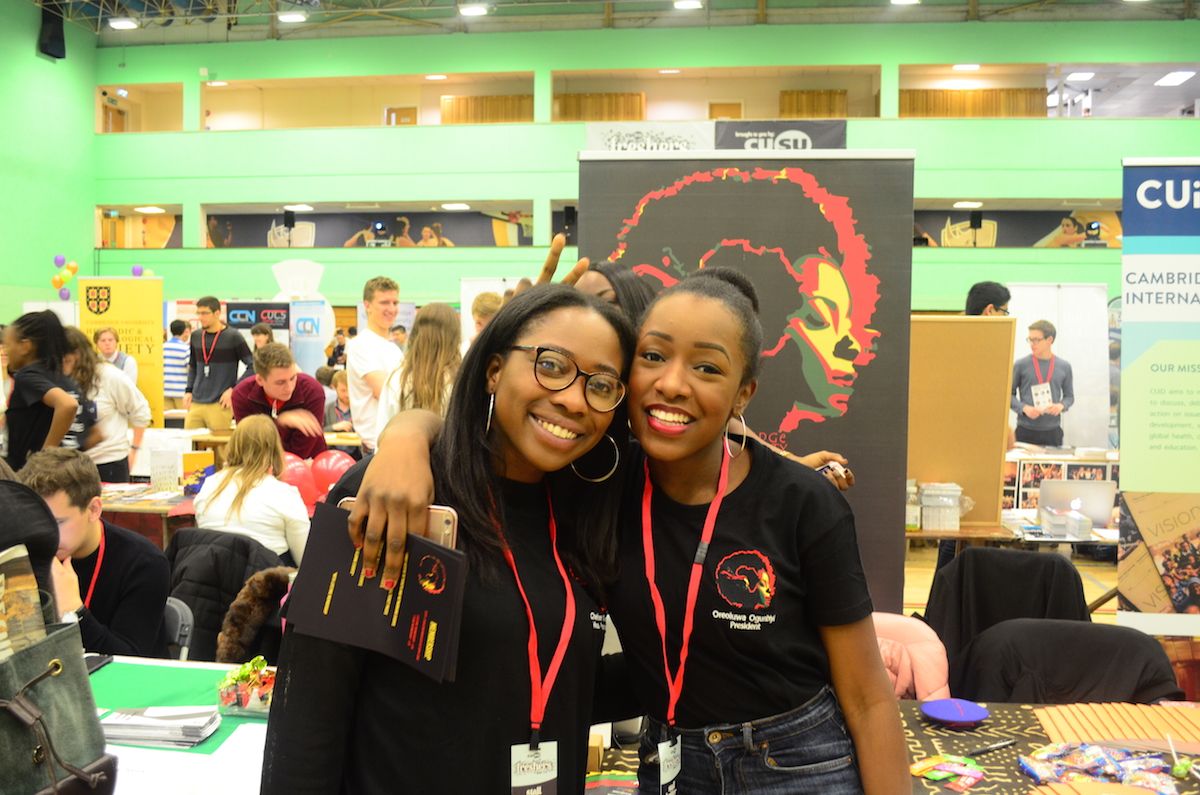 Micro aggressions are common, even when they seem innocuous

Among the insidious micro aggressions at Cambridge – being told you "speak good English"or are '"fit for a black girl" – a couple of experiences stood out for Chelsea and Ore. One was the assumption they went to Anglia Ruskin, the other university in Cambridge. Ore explains her frustration:

Ore: "Of course, you for some reason cannot seem to conceive that I might possible have earned my place here. It might seem subtle but it's a sign of something deeper about how you see us as black women."

Having your hair touched is another which happened all too frequently

The other was having other students touch their hair. For Chelsea, the time which stuck in her mind was when two of her housemates grabbed her hair as she walked down a corridor with her boyfriend. When Ore came back to uni with braids, five of her flatmates crowded around her in the kitchen, touching and smelling her hair.

Ore: "Yeah, that was pretty bad.

"Because literally, it's not just one person touching your hair, it's everyone like, 'Oh my god, let's marvel at this weird creature', which I think was pretty grim." 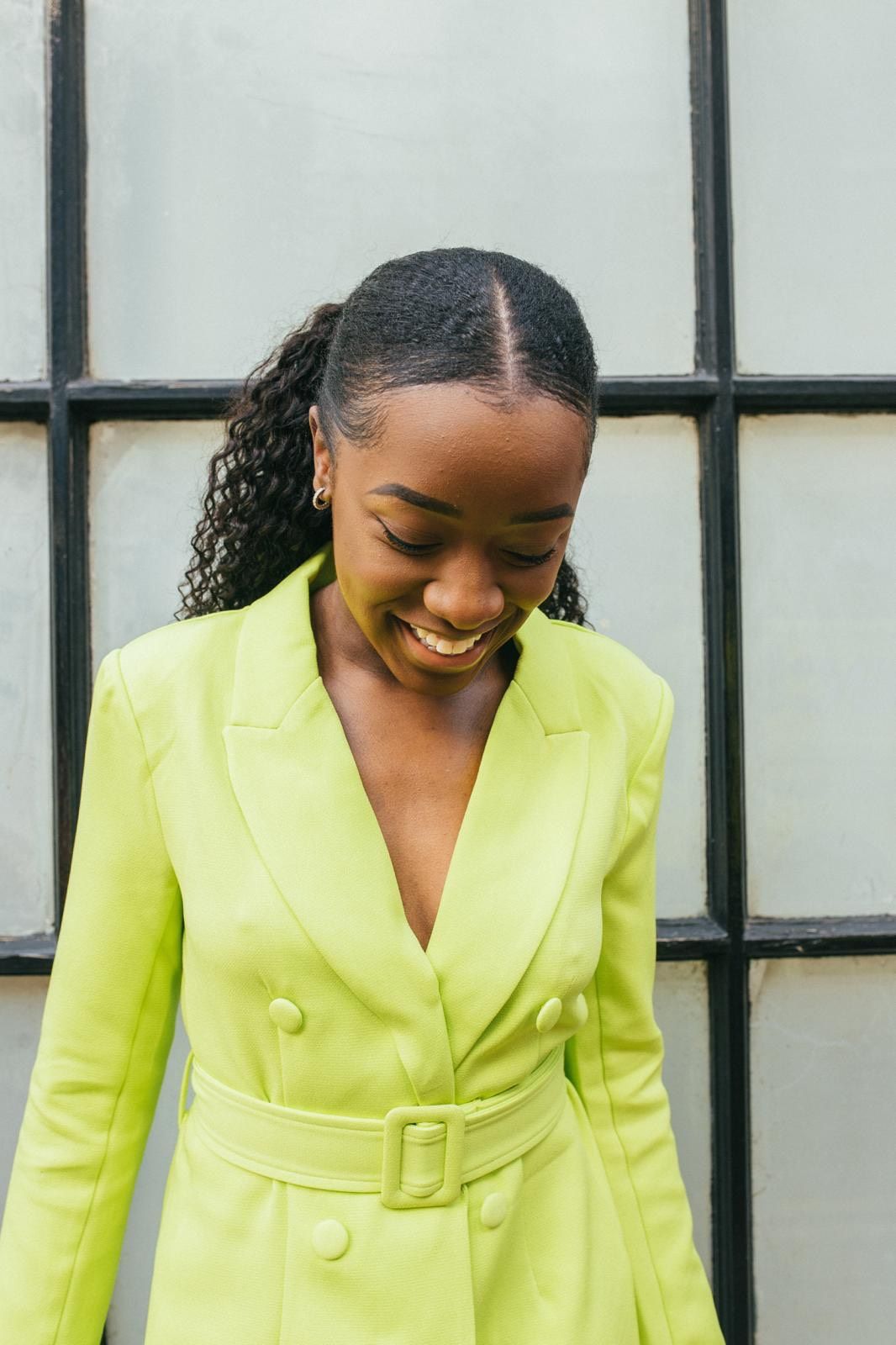 In her first year, Ore campaigned to get the Benin Bronze – a bronze cockerel stolen from Nigeria, on display in her college – repatriated. Ore said there were meetings where it felt like decisions had already been made, and learned what it was like to come up against the uni machine. The cockerel was taken down, but not returned to Nigeria. The importance of this is more than symbolic.

Ore: "How do you believe an institution telling you that you're welcome when everything on the wall and built into it suggests otherwise? That where the bronze comes in, it's more than just a symbol. It's a legacy. And it's telling of what an institution still stands for. There's kind of a conflict and these ideas just leave us feeling really left out as black women."

Chelsea: "For me, it's a comment on how we memorialise history as well. What parts do we prioritise? And what parts do we just not pay any attention to? 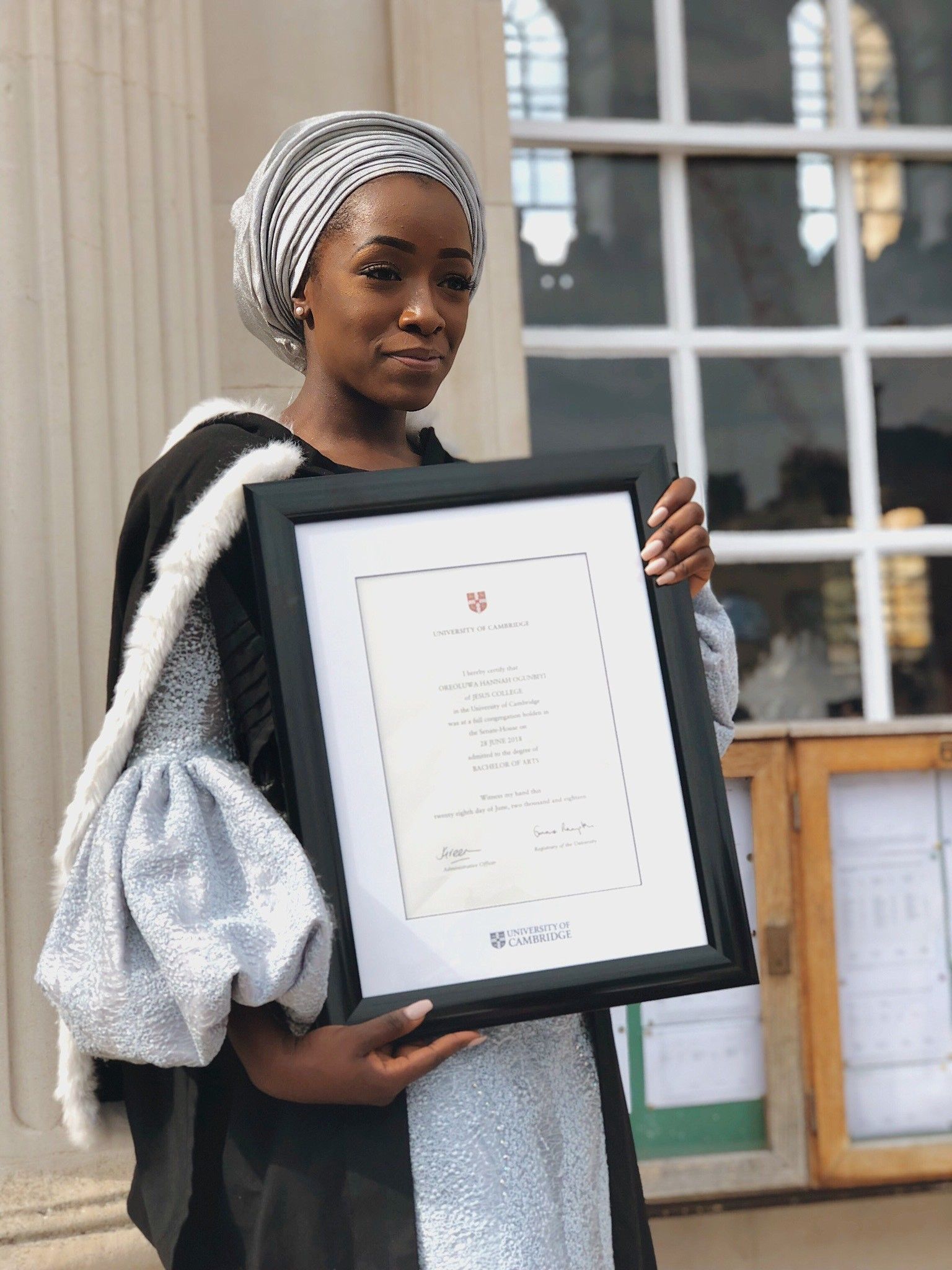 Ore at her graduation

Last month, a story came out with the headline: Black students reluctant to apply to Cambridge University 'due to lack of Afro-Caribbean hairdressers'. Chelsea sees this kind of media coverage as a distraction from the real issues.

Chelsea: "What really annoyed me was that there was the perfect opportunity to have an in depth and critical discussion about why black students aren't applying to, let's say Oxbridge, in this particular example. But instead, it was spun as something that is so trivial, and makes our experiences really trivial as well.

"I personally think not a lot of people are asking the question of why black students aren't applying. The starting place is always wrong. For me, it's loads of things. It's going back to school teachers, for example, like national curriculums. When you go into these environments, it's very easy for universities to focus the whole 'diversity' aspects of the situation, but not really look at the inclusion part.

"To just kind of boil it down to hairdressers. That's horrible. Like is it doesn't make sense. And again, it just trivialises the whole thing." 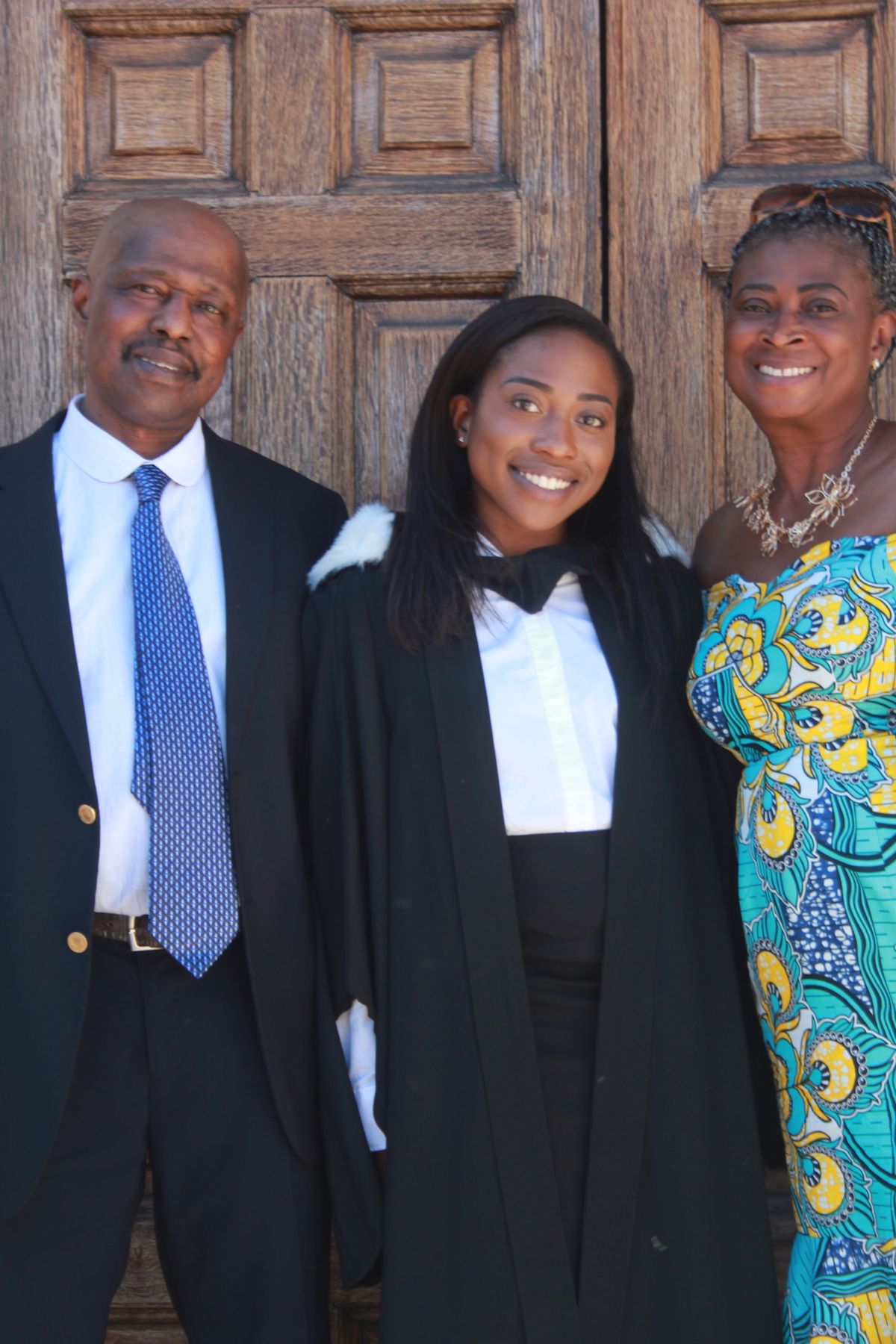 Chelsea at her graduation with her parents

Chelsea: "That's where the conversation needs to start as well. This whole idea of complicity. It's not enough to just be like: 'Oh, well, I'm not racist. I didn't say anything so I'm fine.' It's what Ore was saying: Just what are you doing? What are you not doing?

"It's just how can you support us? How can you listen? Yeah, what can you do in your own everyday life and private space to kind of combat these issues? Because every single bit helps."

Ore: "Everyone can claim that they have good intentions. But like, I don't think that the people who are touching my hair that day wanted to do me any harm or wanted to cause the feelings that I felt. It's not about that. But it doesn't mean that they don't have work to do or that they shouldn't be sorry for what they did.

"You might not be the direct perpetrator. But if you're not using your privilege to lift other voices up, if you're in a space and have access to space, but you're not holding the door and letting other people in after you you're just as bad regardless of what your intentions are when you get into that space.

"Having good intentions and showing up is one thing, but what you do when you're in that space is another."

Ore: "This is why people need to read Taking Up Space and understand that everyone has a different role to play in the journey of like black students thriving. It from the teachers. It's from parents, but it's also from universities and institutions and from the people who are at the end as well."