Chloe Matthews, a student paramedic at the University of Hull, was left shocked after a man she swapped numbers with demanded money back for the drinks he had bought her on a night out because she didn't go home with him.

Danny, who had brought Chloe drinks all night in ATIK nightclub sent her a text after the evening asking for a refund for the drinks he'd bought and said he felt it "wasn't really worth his time". 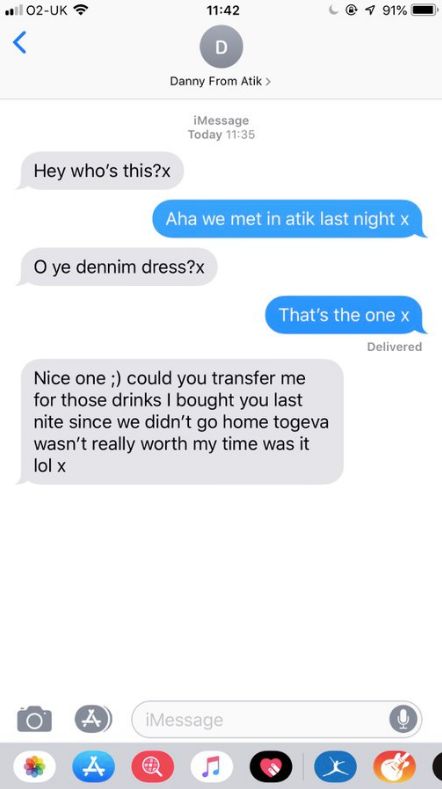 On Twitter, Chloe shared the text messages and vowed to "retire" from nights out after Danny's behaviour.

In the messages, Danny had initially asked Chloe who it was, when she replied explaining that they met in ATIK he made his outrageous request.

With some grammatical mistakes he said: "Could you transfer me for those drinks I bought you last nite since we didn’t go home togeva wasn’t really worth my time was it lol."

Chlo Matt is officially retiring from nights out pic.twitter.com/FpCzd4Yyv0

Many people who read the message on Twitter couldn't believe Danny's cheek and asked Chloe whether she sent the money.

She responded and said: "Of course I not I'm skint."

Others have suggested that she should take his bank details and sign him up for a charity donation for animals or Women's Aid.

When Danny's terrible spelling was mentioned Chloe added: "The following texts were even more embarrassing on his part I regret to add."

Despite people asking her to share the rest of the messages, Chloe is yet to post any more updates.