Why was 2019 the year students decided to poo everywhere except the toilet?

Uni students are up for some fairly weird stuff. They'll happily leap into hedges after nights out, vacuum seal themselves in bin liners, and yeet VKs across packed dance floors. But now we've started to notice the most disgusting trend of 2019: People are shitting everywhere.

Shit has been found on club dance floors, in shared showers in halls, in the uni lifts, and even in the bloody library.

We've identified over a dozen different cases of students pooping in public. Below you'll find the most horrible poop-related moments of the year, so the world can see how many nasty wrong'uns are out there:

In Edinburgh, Liverpool and Southampton clubs were shut down

In Edinburgh, it was a standard night out when club-goers were told they had to "evacuate" immediately because someone had taken a huge dump on the floor of the LED room.

Can not believe cunts were pure getting evacuated last night from led room cause someone decided to drop there pants n take a shite ????????? like I'm fucking howling welll it was fkn one a yous ?????????

Then two months later a similar incident happened in Liverpool – this time not on the dance floor, they made it to the toilets but didn't manage to sit on the loo.

Asked why stories of public student shits were so common, Liverpool Tab editor Charlie told us: "I mean I’ve not personally done it. Maybe it’s the freedom getting to their heads and they forget to do basic things like shit at home. Or maybe it’s the drugs and alcohol."

If for some reason you want to see footage of the poo, it's on The Liverpool Tab Instagram. 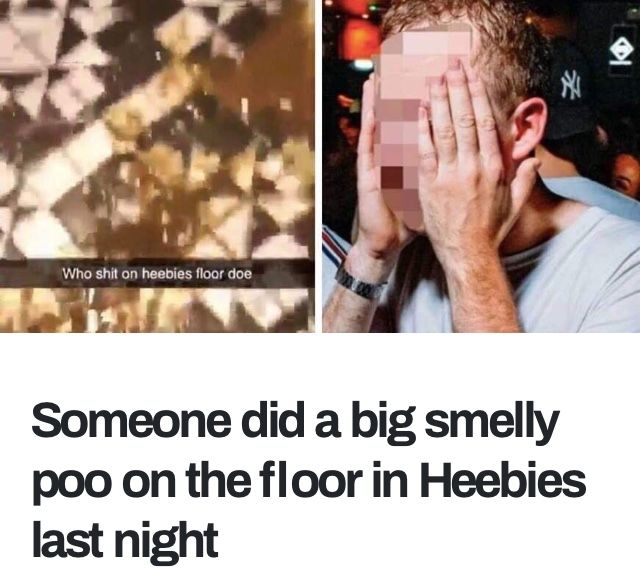 In Southampton a fresher actually shit himself on the Switch dance floor and the club had to be immediately evacuated.

A student, "Dennis", quickly owned up for being responsible for the incident. He even agreed to talk to The Soton Tab, saying he had half a litre of vodka, three or four Jagerbombs, as well as 10 (ten!!!!) pro-plus caffeine tablets.

But "Dennis" was a fake. Three boys from Southampton had made the whole thing up. They created a fake Facebook account, found a picture of dirty underwear on Bing (because "Google didn't have anything good enough"), and even went as far as creating a fake WhatsApp chat to send to The Soton Tab.

Not only are these public defectors shitting themselves with abandon, but some of them actually want to claim credit for them. It truly boggles the mind.

Later in the year Soton writers were fooled into thinking another sticky, stinky situation happened in Jesters, but it turned out to be a dirty piece of malt loaf. We wish all the other incidents were just malt loaf.

The poos were all recorded for posterity on The Soton Tab Instagram.

This happened not once but twice for the residences of Ifor Evans halls. Imagine coming back from a night out, going to grab yourself a lil drunken snack from the kitchen and finding a massive shit on the floor.

According to the shitter’s pals, he was in a right state, far too drunk to walk, talk and even control his bodily functions. They put it down to a symptom of a mad fresher, once again, taking it too far. 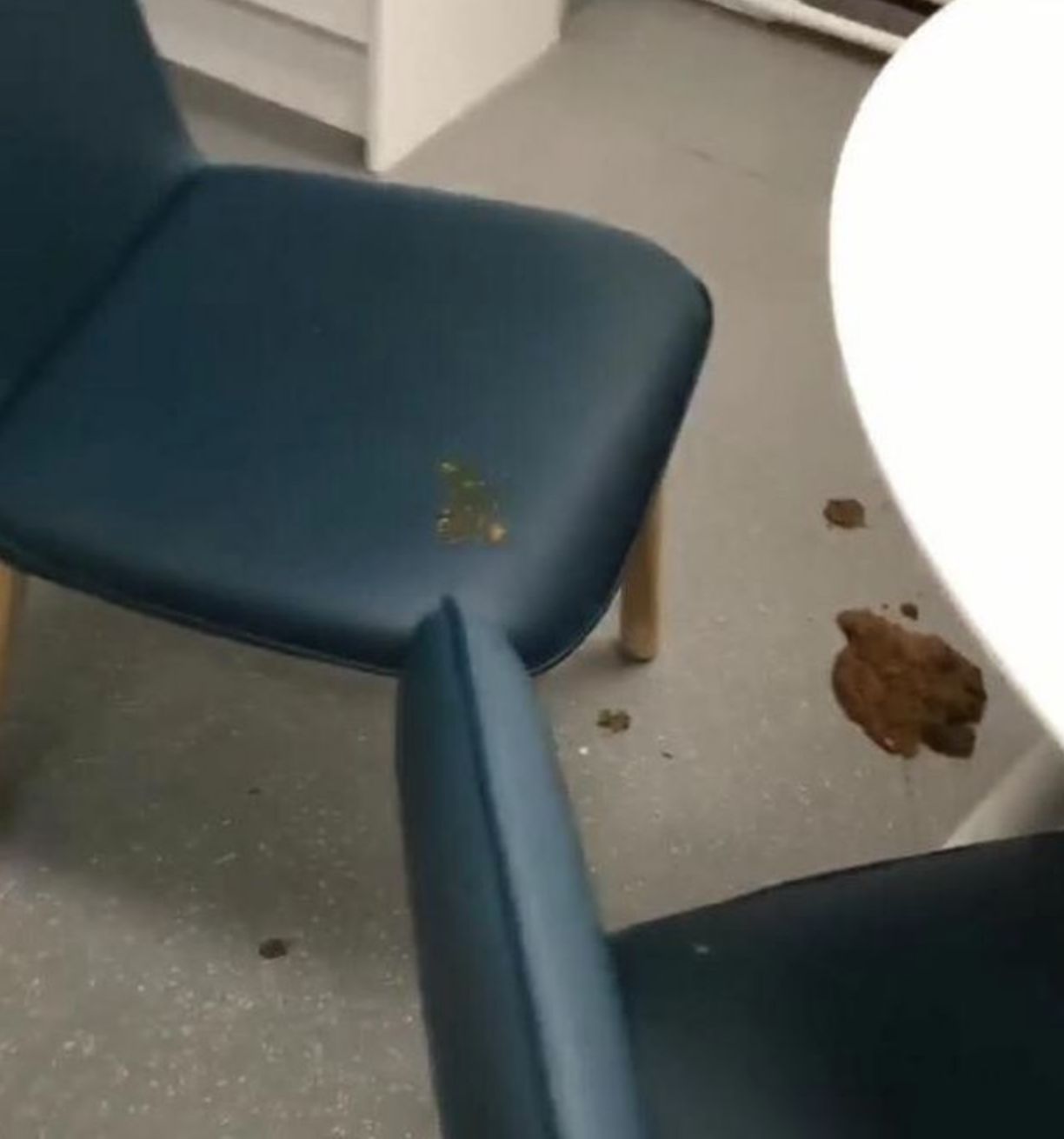 See more photos on @thetabucl if you fancy spewing

Olivia, a first year student at UCL, suggested that this act of public defecation is due to hatred either for the awful conditions of some first year halls or simply out of hatred for flatmates.

It is not an unknown fact that Ifor Evans is the worst UCL accommodation available. It is the home to constant rent strikes, the home to the halls infested with rats and now the secret shitter. These halls have been through a lot and residents are constantly trying to improve the place – may be the poop found in Ifor Evans was simply another act of rebellion.

Olivia went on to say: "That we cant forget just the extent of drunken rampages and parties there are in first year accommodations." This is true, but I don't remember shitting in my kitchen at all in first year..or ever.

One girl in Southampton returned from a long weekend away to find in her room poo on a plate.

Out of the house of seven no one owned up. All that was left with the plate was a note saying: "I'm so sorry, I will clean this up as soon as I'm home, lots of love. Welcome home." To this day, no one ever owned up to it. 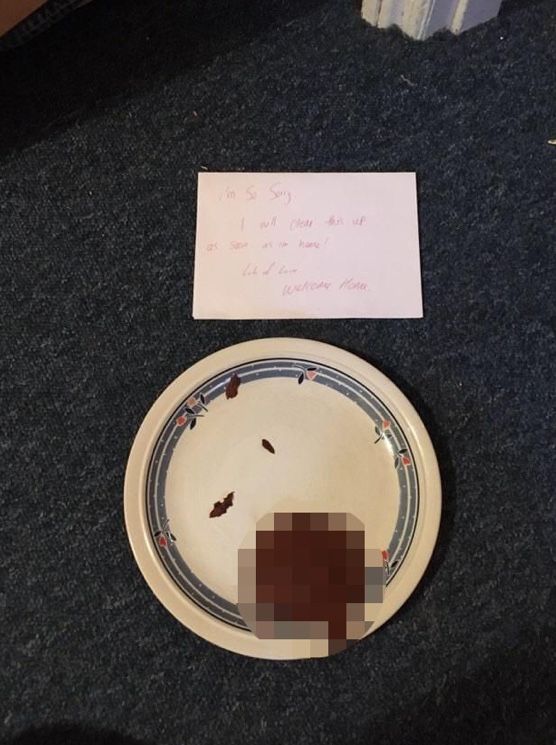 We get it, sometimes your flatmates can really, really grind your gears. Why can’t Karl just clear up his own dirty dishes? Do they really have to have sex that loudly? Yes, they did steal your cutlery.

Shitting on a plate and leaving it in someone's room though is a really messed up revenge plan though mate.

Southampton has had to deal with the most shit out of the year of the public-poopers.

The Soton Tab editor, who has covered the most poo-related stories, believes the sheer number of public poopsters is really down to a trend that people want to get involved with.

She said: "I think there are certain kinds of people that have always been pooing publicly. I think it took a few people to be bold enough to send it in and get it posted for more people to realise it’s actually quite jokes (on top of being extremely grim), more people get involved and it’s a snowball effect from there really".

In Manchester people took to strangers gardens to do the deed

Yep. You heard right. Taking a dump in a garden (no not your own garden – a garden) is a popular choice for the public poopers.

A 4/20 rave in Manchester this year resulted in loads of drunk and high students got a little bit too out of control.

The ravers left a huge mess of poo and defecation (along with some dirty underwear) in people's garden and under Kingsway Bridge, near Fallowfield.

Party-goers held a massive daylight rave and then POOED at the end of people's gardens https://t.co/e6d78tceIV

Local Michael Callaghan told Manchester Evening News: "There were people pulling their pants down and urinating and defecating at the back of the house when I went out to hang my hanging baskets. It's disgusting."

A possible answer for this form of public pooping, which also happened in Cambridge, is to give back to mother nature. After all our faeces is a fertiliser for the greenery of our earth. So maybe some of the vegans and environmental studies students are taking their cause one step further – fertilise the plants and create more oxygen for our beautiful planet.

Tim, a student from Manchester, claims there is a solution to the problem: "I would say that the solution is widespread and cheaper porta-loos provided." Maybe that is all we need.

This exam season students found outside their library toilet a big sludge of poo.

Mia Dixon, who discovered the poo told The Sussex Tab: "I literally nearly threw up and I was like I have to video this because no one will believe that this happened in the library."

Video footage of the poo is, of course, on The Sussex Tab Instagram. 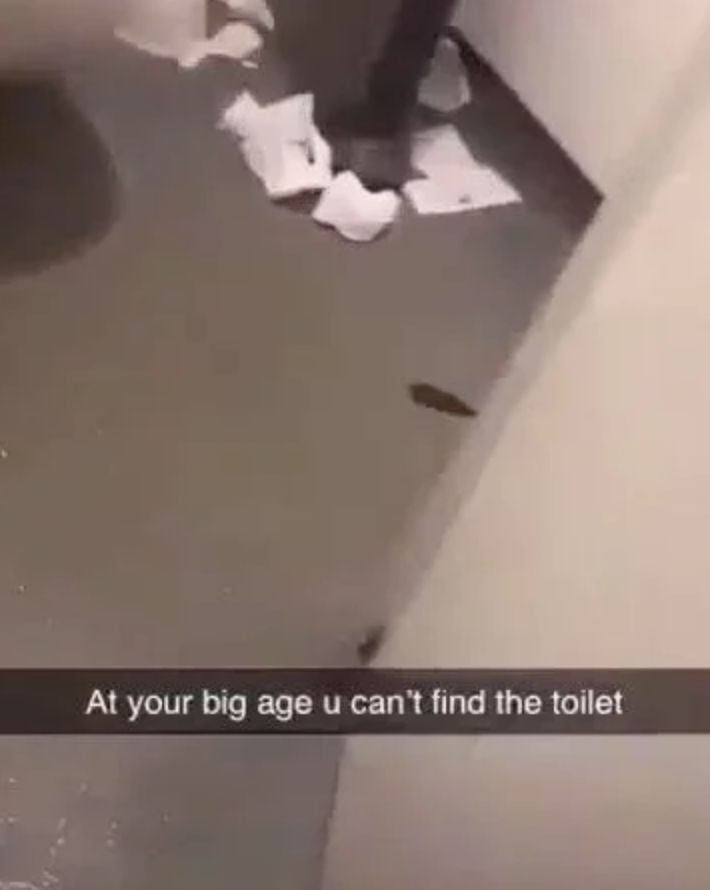 Mia added: "What made someone think – 'you know what there's a perfectly good toilet there but I will just shit on the floor?'"

Exam season is tough on everyone. Maybe you had one coffee too many and suddenly started feeling its sudden laxative effect, so quickly you couldn't make it to the library bog inside.

Daisy a student at Sussex told The Tab exam nerves might be to blame. She said: "Nervous poos happen during exams". Yes, maybe this is true, but does that mean you miss the toilet completely?

We can just about deal with noisy chewers and loud whisperers in the library, but this is taking things too far.

Another Fallowfield phantom pooper wrote a message out of literal human faeces on the floor of the shower. 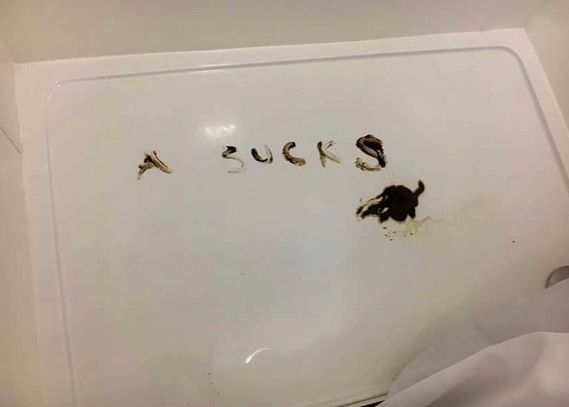 The reporter at the time said they were "not yet able to pinpoint whether the problematic pooer is one sick, twisted individual or a group of people who love to poop." The mystery was never solved.

Students living in Cygnet Wharf, Lincoln had a nasty shock when trying to get into their lift.

A fresher in the halls, Alison Cromarty, told The Lincoln Tab when they asked the accommodation security who it could've been they said "apparently a homeless person broke in," which meant "all the halls had to be checked by security which was mad. "

Public pooing clearly has all sorts of consequences for everyone involved.

The conclusion of the faecal matter is

We don't really know why people seem to be obsessing over taking a dumb in public – but we all know it's very, very grim.

All we know is it needs to stop now because no one wants to see it.

Pooping in public is a scary experience

I mean c'mon you can't all have IBS so get it together people!

• WAIT, the dirty turd in Jesters was ACTUALLY a dirty Soreen loaf