People are now making Ted Bundy memes, so we’re all going to hell

Disappointed, but not surprised

The film, Extremely Wicked, Shockingly Evil and Vile, premiered last Friday. Not that anyone calls it that, because it's become collectively known as the "Zac Efron Ted Bundy movie". It has brought notorious serial killer, Ted Bundy, back into the public eye. Well now, there's a flurry of Ted Bundy memes everywhere and I'm disappointed in all of you, but not at all surprised. See you all in hell.

The internet has reacted to the film with the only way it knows – memes. On the surface, it seems like we should all go to hell for laughing at them, but but most of them are actually to do with Zac Efron playing the lead. Everyone is shook the teen heartthrob, who was once Troy Bolton in High School Musical, is now playing America's most notorious serial killer.

These are some of the Ted Bundy memes going viral at the moment: 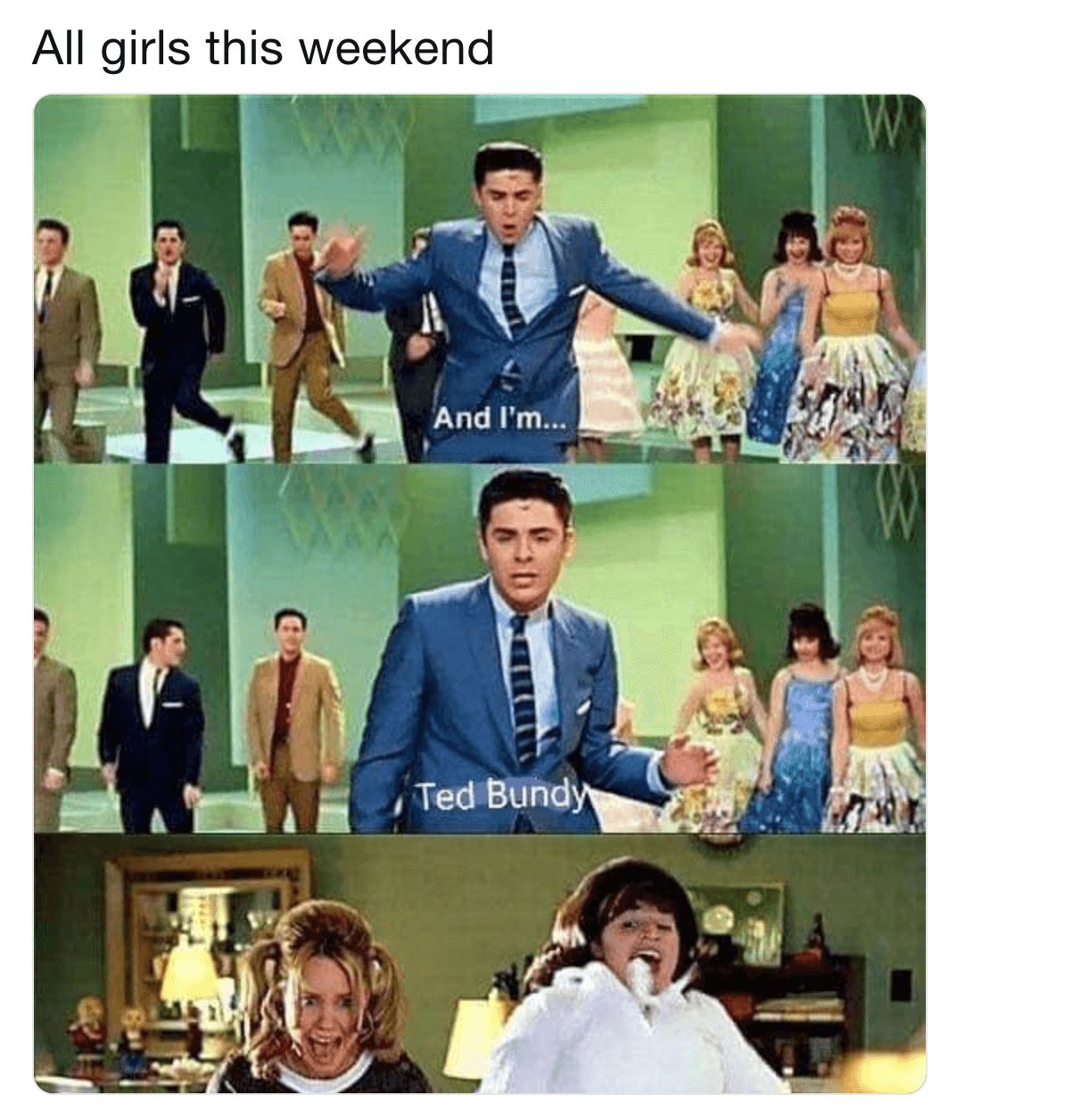 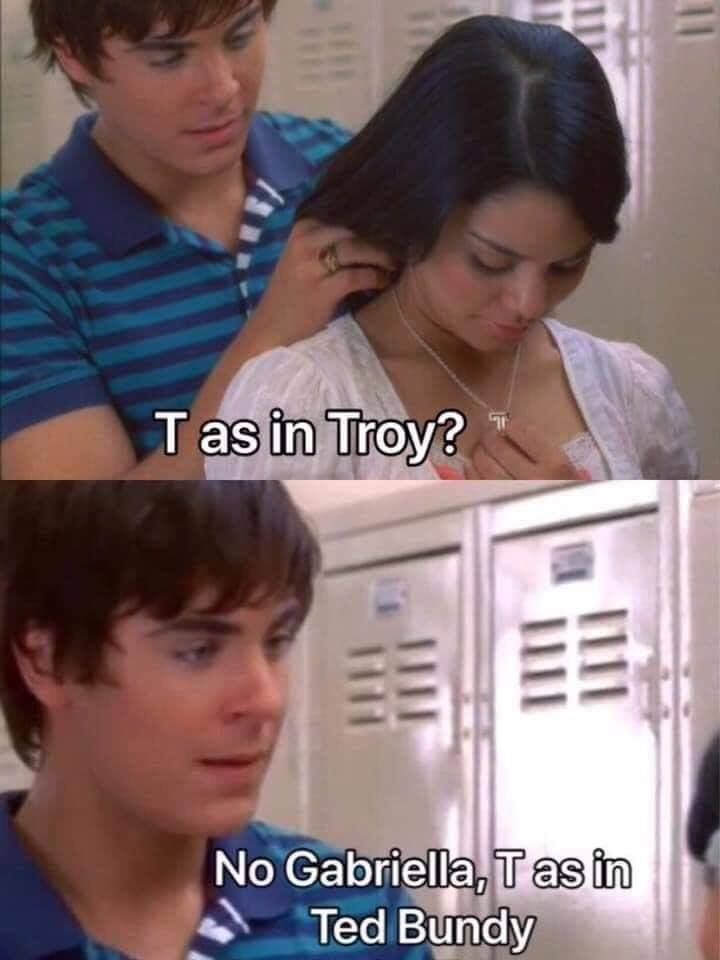 zac efron’s performance is phenomenal in extremely wicked, shockingly evil and vile but this is all i could think of when he walked out like this in the court escape scene pic.twitter.com/bbyL3MswKx

Me to me while watching the Ted Bundy movie and being attracted to Zac Efron: pic.twitter.com/Ez8vqAkjof

The Ted Bundy movie has me questioning every man that I know pic.twitter.com/uVknn0nugv 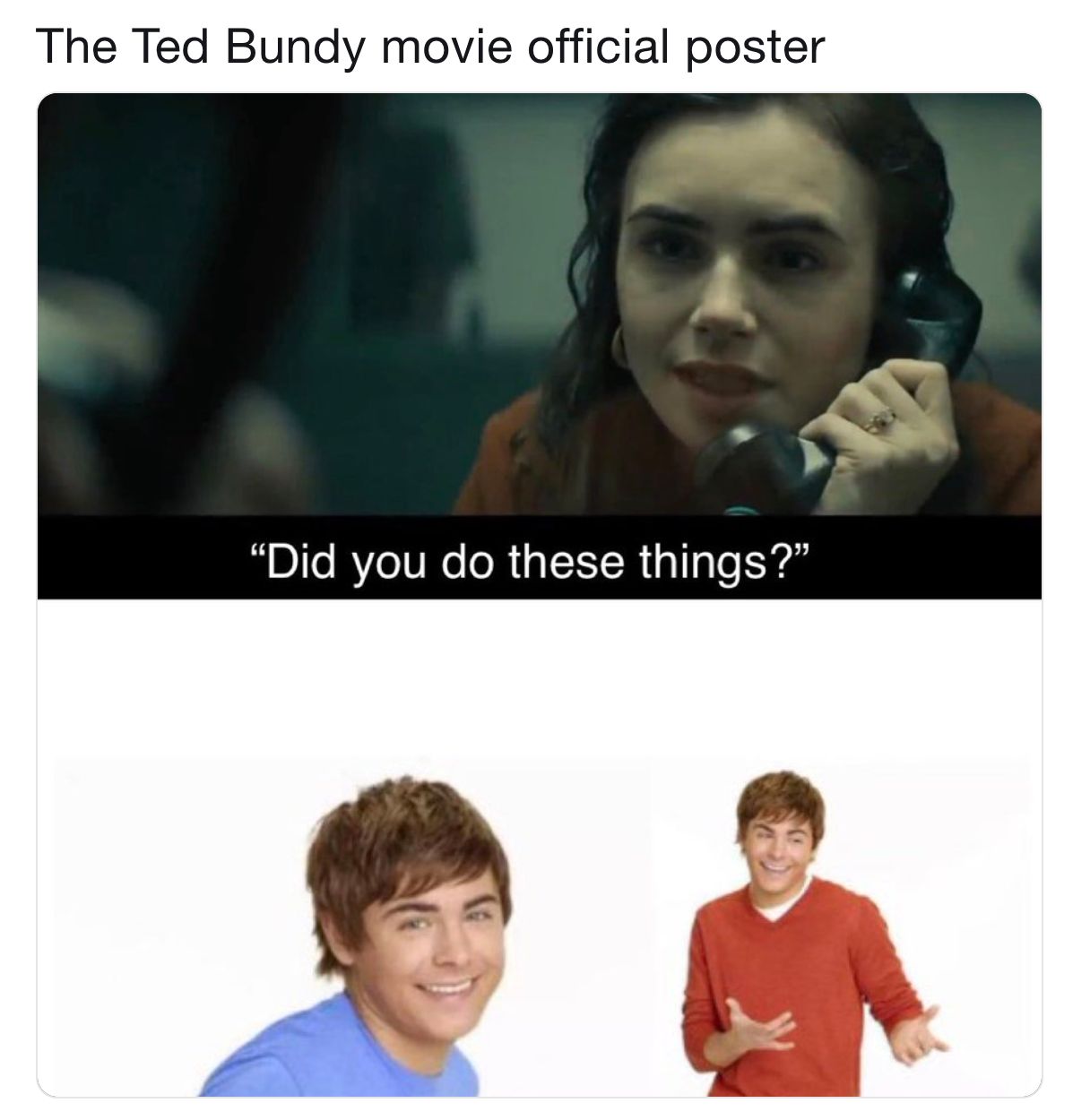 troy bolton has gotten into some shit ever since he graduated East High #ExtremelyWicked pic.twitter.com/yZyOARG7Ta

When Ted finally confessed to Liz with “hacksaw” #ExtremelyWicked pic.twitter.com/ACsaHfDcnc

When Ted Bundy said “I do not accept this sentence” #ExtremelyWicked pic.twitter.com/o3KSJbSLVn

Ted Bundy as he tried to disguise himself from the authorities #ExtremelyWicked pic.twitter.com/GabswAvBWL

Critics are calling @ZacEfron’s performance as Ted Bundy in Extremely Wicked, Shockingly Evil and Vile as his “best performance” yet.

However, I feel like critics may be overlooking his performance in HSM2. Specifically in “Bet on it” pic.twitter.com/hlHvgOWtu2

The film is based on the real life serial killer Ted Bundy (played by Zac Efron) – who assaulted and murdered young women and girls during the 1970s. After years of denying his crimes he admitted to 30 murders, but the true number of victims remains unknown. He was sentenced to death by electrocution and died in 1989. The film is from the perspective of his longtime girlfriend, Elizabeth Kloepfer (played by Lily Collins).

Where can I watch Extremely Wicked, Shockingly Evil and Vile?

If you're getting serious FOMO, and haven't yet seen the Zac Efron film, you're not too late. You probably don't understand the Ted Bundy memes, but the film is still available to stream.

The Ted Bundy film is available in the UK on Sky Cinema, which also means it is streaming on Now TV. So if you bought a subscription ready for Game of Thrones season eight then today is your lucky day! You've got Zac Efron in your package too!!! If you don't want to pay for the film, here's how you can watch it for free – you can thank me later.

It is available on Netflix in the US. Netflix UK has confirmed the film will not be coming to its streaming website in the UK.