Here are all of this year’s cringiest SU election campaign videos, now let me die please!

Seriously, how many Ariana Grande references do we really need

After January and February seemed to last forever, we finally find ourselves in the month of March. March brings with it the joys of Pancake Day, St Patrick's Day, but most importantly, it's SU elections time.

SU elections bring with it a vast array of the good, bad and ugly campaign videos. Obviously, we did the digging to find them, so you don't have to. So here are all the cringiest, weirdest and downright idiotic SU election campaign videos of 2019, from all across the UK.

*Warning – Contains flashing images*Bored of the other union campaigns? Need a change? Well…Vote for Steele for Union Affairs

We're kicking off 2019 election season with a bang, which can come in no other form that that of Charlie Steele's campaign video – a sight to behold like no other.

In what can only be described as a Tom Harwood NUS style meme fest, Steele pledges a range of faux promises, such as "personal crying boxes in the union", changing the university motto to "pizza 2 for 1" and a promise of the "end of world hunger" – interesting.

Although thoroughly entertaining, and clearly trying to make a point or two about the state of SU politics – whatever that may be – the video fails to mention what Steele is standing for and is purposefully very cringey indeed.

Want a quick, easy and *hopefully* entertaining bite of my manifesto? Look here!Voting has now opened! #ChooseLouis here: studentleaderelections.co.uk/votingMy manifesto in full: https://goo.gl/7uWNNrThanks for all of your support so far! Keep your eyes peeled for more videos coming over the next few days <3

Posted by Louis For President on Monday, March 4, 2019

It wouldn't be a list of cringey videos without an appearance of the Venga Boys at some point. Louis's campaign video features him dancing along to "We Like to Party" by the Venga Boys, while swiping at various pledges he has to put across.

Some solid campaign pledges, but put the Venga Boys on top and we have next level cringe.

Hello all! Here is my third and final campaign video for elections week! Just a funny video I have always loved and wanted to recreate?The voting closes at 2pm this Wednesday so don’t miss your chance to vote! Only 20% of students at Lincoln have voted so don’t be that person! Vote via the Lincoln SU website it only takes one minute! #VoteAbi #1VicePresidentActivities #BackBrown

In this third election video from Abi, she pokes fun at different societies with the help of a friend, in a sort of funny, sort of cringe, but definitely memorable vid.

Must have worked though, as Abi was successfully elected VP Activities last week! Congrats!

Come say hi to me during campaign week! I won't sing for you, but I've got plenty of sweets and time to listen ❤️Lyrics: "Sleepy, head is hazy, are you hangin’?Well we’re gonna make Panopto mandatory,For everybody, you’ll do more learning’ And it helps your revisionGive me, accountability, for poor lecturing,Cause I’m gonna give you module rating systems,And transparency, on your tuition fee, �So you see where you spendin’VP, Do you want me?Are you voting?Say you’re gonna go online and vote for OllieCause I love ya,And you know yeah.I’ll be on your side always…"Head to https://www.cardiffstudents.com/elections from 9am on Monday and #VoteForOlliesPolicies

Posted by Oliver Copleston for VP Education on Saturday, February 23, 2019

Here, Oliver carefully curated some lyrics to go on top of "In my feelings" by Drake, featuring one of his friends with a horse mask on… sure, why not, anything goes in election season right?

He reminds you to vote for him "because I love ya, and I'll be on your side always" – cute!

Posted by Derya for SU President on Sunday, March 3, 2019

The classic "let's drink a VK in the vid because it'll be really funny", with some outtakes of him sliding into position at the end, make for a cringeworthy performance from Derya in this campaign video.

He is president of the university's wine and cheese society though, which does actually sound like a hoot.

Posted by Vote Ellen #1 for Student Activities on Monday, February 25, 2019

One of many Ariana Grande/Thank U Next inspired campaign videos you're bound to see this year. Ellen Fearon starts her video with the classic Mean Girls inspired montage "Ellen Fearon punched me in the face… It was awesome" sort of vibes, but no one wants an SU officer that's punched people before they've even been elected, that just screams scandal.

She does have some good policies though 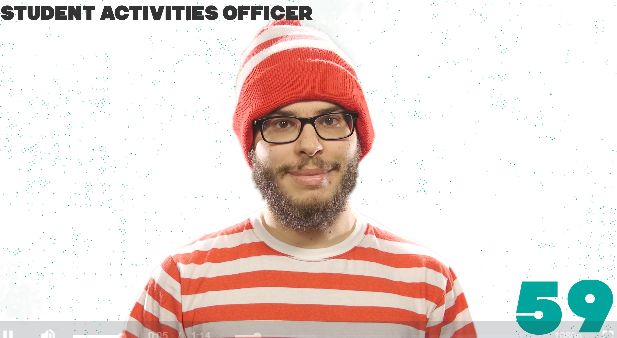 Although the contents of Brian's manifesto seem pretty solid, we have no idea why he decided to dress up as 'Where's Wally', Brian can you explain please? Also, is there glitter in his beard? We may never know. The full video can be seen here.

Hello Everyone,It's been a long time in the making, this campaign has been amazing so far and I think it's time to show these elections shouldn't always be stressful, are really fun and most importantly they're a fantastic experience.I present to you – Thank You, Jake.https://su.sheffield.ac.uk/make-a-change/officer-elections-2019/how-to-vote

Another "Thank U, Next" inspired election video (come on guys, it's getting old now), Jake Verity promises to give "an app, cheap transport" and…"a music festival" in a very questionably dubbed campaign video that you can't help but cringe over.

Same but different. Joe Leam, Joe Leam, Joe Leam, Joe Leeeeeam. #TeamLeamVOTE AT goldsmithssu.org/elections – voting closes 12pm Friday 8th March.After being Campaigns and Activities Officer, it’s time for me to step up and make bigger, better changes for the student body.Rather than waffle about myself, here are the 10 things I will spend my year fighting for:1. MENTAL HEALTH SERVICES.Continually we hear reports of months waiting for counselling services. Amid a mental health crisis, the university MUST do more. I will lobby the university to commit more money for counselling – and for culturally competent counselling training, as well as mental health training for all lecturers. I will also push for another member of the advice service in the SU.2. OUR WEBSITE IS DEAD.I will ensure the SU has an overhauled brand-new website. Easy to use, drop down bars, steady access to what we’re up to. Students should be able to see what the SU actually does – and have a solid hub for all SU activity.3. CHEAPER ACCOMMODATION – CUT THE RENT.With the cheapest halls going, £143 – £250 a week is not right for students to pay. We must have affordable housing for all students of all backgrounds. After involvement in Goldsmiths Housing Action, I will continue to push for rents to be LOWERED and prices CAPPED at 50% of the average maintenance loan, as well as halls places subsidised by the University. Living in halls must be fair and affordable for all. I will also work for better compensation for problems, breakages and poor conditions.4. FIGHT FOR STAFF IN-HOUSE.After fighting for the cleaners to have better conditions and winning, I will continue to fight for all staff to be treated fairly and in-housed; starting with security. Predominantly BME and migrant outsourced staff deserve equal treatment. All staff should have fair rights. Stability for staff means better care for students.5. DISABILITY AND ACCESSIBILITY ON CAMPUS.Far too long our campus has remained inaccessible to students with accessibility needs. We need to make our campus easier to use for all. I will get the university to conduct an accessibility review of campus, and push for lecturers to be trained on disability issues. It’s also important we see online lecture capture for those who can’t always make it to lectures.6. BME ATTAINMENT GAP AND RETENTION.After supporting the creation of a Widening Participation Committee, I will continue to ensure the college work on battling the attainment gap and ensure greater retention overall. Decolonising the curriculum, mental health training and more contact hours are vital.7. TIMETABLES A MONTH BEFORE TERM BEGINS.Timetables should be received a month before the uni term begins. Students need time to prepare for jobs, caring for kids, loved ones or generally plan ahead. I will make sure the university commits to this.8. PHASING OUT PLASTICSI will ensure the SU phases out all single use plastics it sells and replaces them. I will work with UCU to encourage the university to adopt the Green New Deal.9. GRADUATION FEES.I will battle the university to make graduation free, both gowns and tickets. Paying an extra £100 of your own money on top of £9,250 is a kick in the teeth and unacceptable.10. FIGHTING THE MARKETISATION OF EDUCATION.I will continue to fight for free education for all, promoting anti-marketisation both inside the college and on a national level where possible.Dolly Parton would vote for me.