The banter era is over at De Montfort University

You might not have heard of De Montfort University before. It's in Leicester.

Until Monday, it was home to Vice Chancellor Dominic Shellard. His £350k salary might have put him in the upper echelons of the fat cats, but Shellard is by far the weirdest Vice Chancellor to have ever graced British unis.

During his nine-year spell, Shellard bantered away with the Queen, got appointed as a special representative to the UN, and spent £22,000 of uni money on a charity flashmob dance and a video of him lip-syncing to "Holding Out for a Hero".

Now, he's suddenly and mysteriously left his job, halfway through the academic year. Nobody knows why.

Minutes after DMU announced his departure, the Office for Students announced they're investigating "regulatory matters at De Montfort University." The next day they publish a report showing Shellard got the biggest pay rise of any VC in the country.

He was the third member of the uni's senior management to resign in quick succession. Three more have subsequently resigned and there's talk of a uni in crisis.

The Tab has done some digging on Shellard's bizarre reign, speaking to students and staff who lived through it. It all starts in 2012. Dominic Shellard's reputation is still intact.

He spent £22,000 of uni money on a charity flashmob dance and a video of him lip-syncing "Holding Out For a Hero"

It’s a parody music video of Bonnie Tyler’s "Holding out for a Hero". Shellard, who looks like a shiny grape in a suit, is lip-syncing for his life and dancing like Theresa May.

There’s a man dressed as a knight on a toy horse thing. Someone's rolling around in a single bed in the hallway.

He goes into a courtroom and a lecture theatre. A room of students are made to sing and point at him. 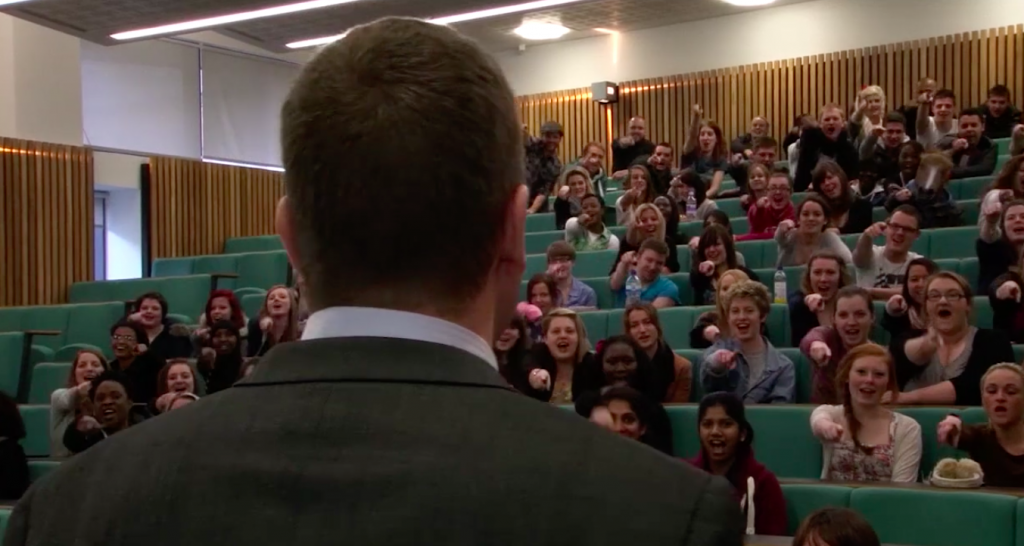 As Shellard walks around with the confused air of a Terminator struggling with a particularly hard come-up, the radio presenter appears and "tries" to punch him. I’m not sure why. Shellard’s clearly alarmed by this so proceeds to do some star jumps. 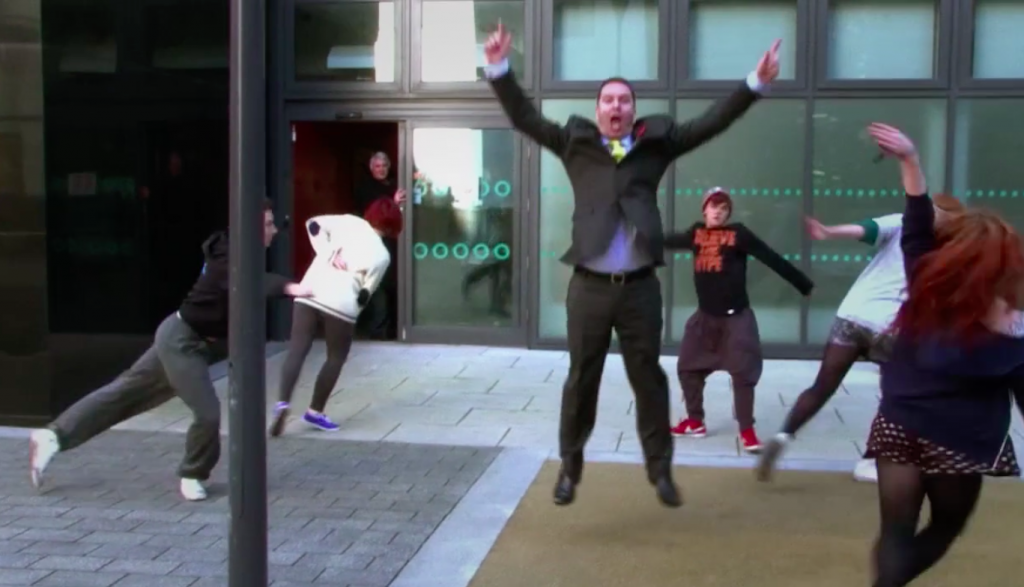 Naturally, this is followed by some Leicester Tigers Rugby players lifting up a small child dressed as Superman.

Nine officers of Leicestershire Police take time away from their busy schedules to bundle the radio presenter as Shellard high-fives some waiting fans. 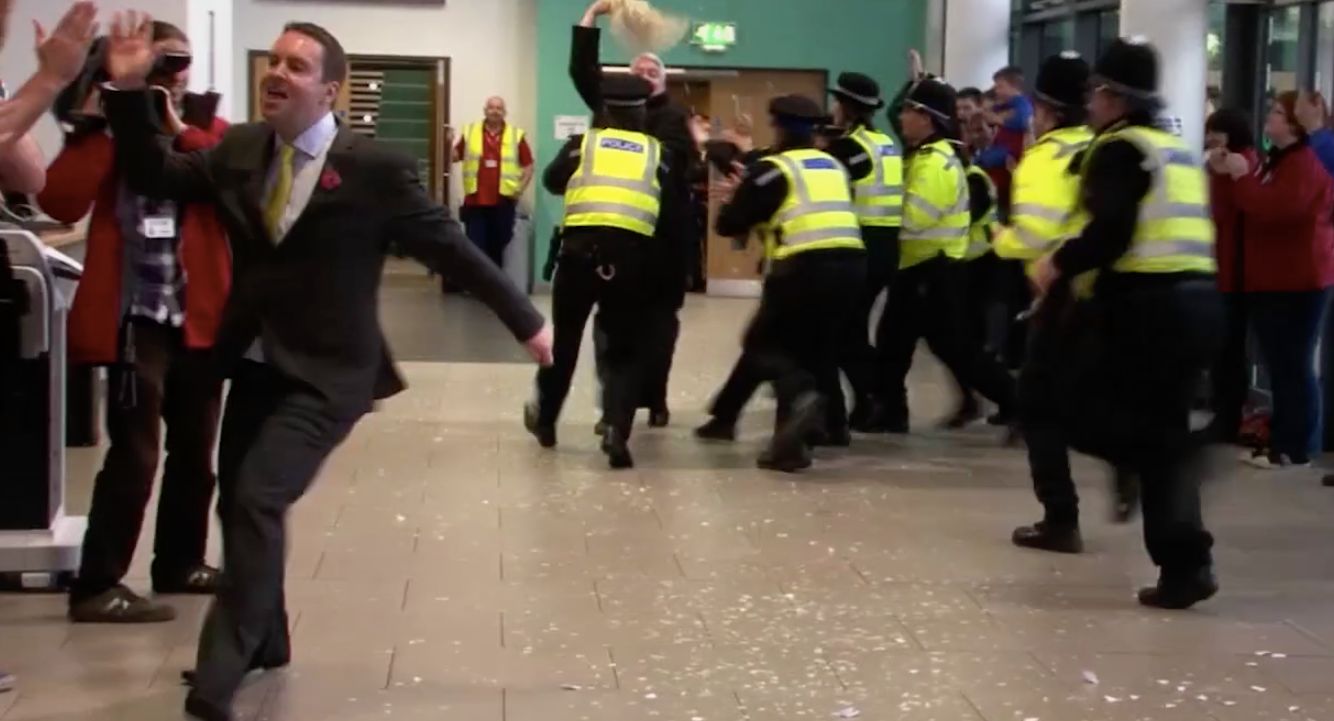 Some big crowd scenes ensue. More than 1,000 students and staff were asked to be a part of this video. The exalted Vice Chancellor walks through like Khaleesi in that episode of Game of Thrones. 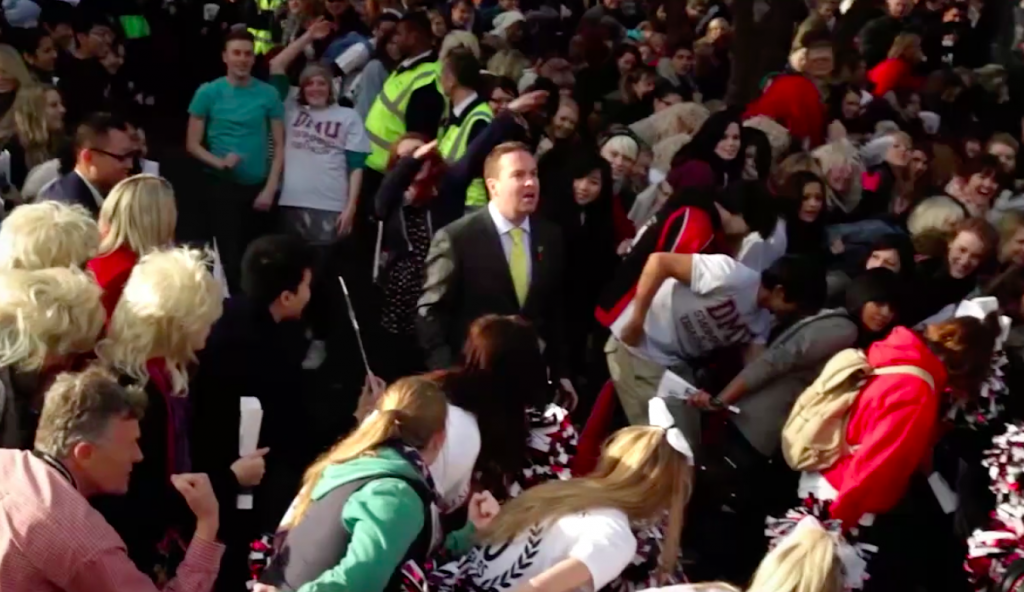 And then, just when you think Shellard is safe, he gets into an Audi where the radio presenter is waiting for him. We are left on the edge of our seats as "To be Continued…" appears on the screen.

One person who worked at DMU during Shellard's time as VC "thought he was okay at first, but his megalomania soon showed."

"The video is a prime example. Everything he did seemed to just be about him. The whole thing made me cringe," they told The Tab.

To make everything more cringe, the video cost £22,000 of uni money. Leicestershire Police told The Tab their officers did it for free, but the uni forked out £15,582 on a PA system. For a video where the sound was dubbed over anyway.

The video only raised £5,000 for charity. But still, it's hard to watch the video and come away not thinking Shellard's a hero. He's certainly paid like one.

The uni love him. DMU has become "one of the most financially sustainable in the country" and was awarded the inaugural University of the Year award for social inclusion by The Sunday Times.

In 2017-18 Shellard received the highest percentage pay rise of any VC in the country, increasing his yearly salary to £350,000. As well as this, he was given rent-free accommodation on campus and £2,685 to fund his membership to the Club at The Ivy in London.

Which raises the question: How was this all decided? 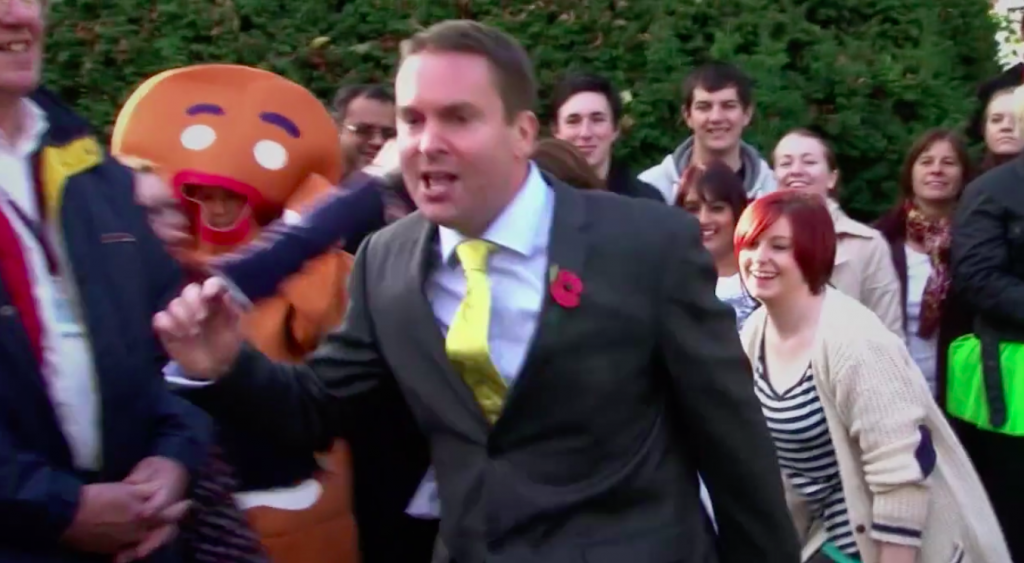 Plus, Shellard and the man who signed off on his pay rises have interests in the same company – a law firm called Metamorph. Tony Stockdale failed to register his involvement with the firm on the university’s register of interests. He resigned from the Board of Governors the day after Shellard.

Obviously, legally speaking, there's absolutely no suggestion of any corruption or wrongdoing. We want to make that very clear.

DMU were really keen to get him a title, too. In 2015, The Independent reported that university officials lobbied for Shellard to get put on the Queen's New Year's honours list. In 2017, Shellard was made a special representative to the UN for the Gandhi Global Family.

And it turns out he's been trying to get close to the Queen since 2012.

In a great move, he had all the copies of the student paper destroyed just before the Queen came to visit

In 2012, the Queen and Kate Middleton attended a fashion show hosted by DMU. In DMU's promo video of the event, you can see Shellard sat next to the Queen, beaming. 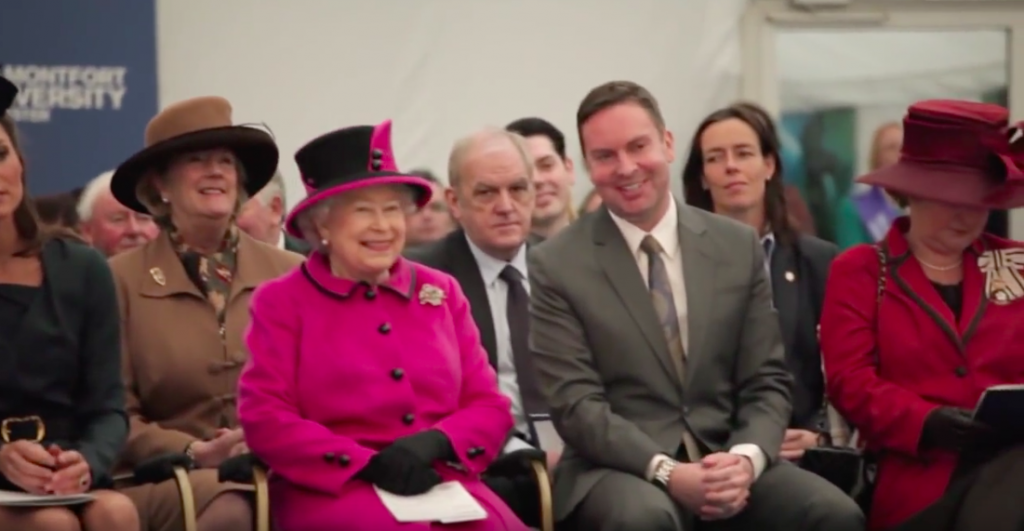 "What do you mean you haven't seen the video, Liz?"

Looks fun. But the visit pissed a lot of people at the uni off.

Many students were dismayed at this use of money, with one going as far as to describe the cost of the royal visit as "beyond extravagant." DMU wouldn't tell The Tab how much the whole thing cost. Hungry students were bribed with promises of a free breakfast if they attended the event.

More suspiciously, the week before the visit an article was written in DMU's student paper, The Demon, discussing negative feeling towards this wasteful use of money. Naomi Marcus was co-news editor of The Demon at the time. She claims that Shellard quickly had all copies of the papers removed from campus for fear that any visitors may pick up a copy , and says editors were told this was for "legal reasons".

"Shellard wasn’t happy that some students weren’t as thrilled with the royal visit as he was," says Naomi. "Shellard was maybe worried that it would get picked up by all the visitors and media on campus," she told The Tab.

"We were gutted, so much work goes into each issue. Nothing like that had ever happened before," Naomi told The Tab. It ruined morale.

That wasn't the last time uni output mysteriously vanished under Shellard. In January of this year, all the university's social media channels were taken offline as part of a "digital detox" to help students' mental health. Shellard took the opportunity to delete his Twitter, which hasn't resurfaced.

And now, with the uni being investigated for mysterious regulatory matters, and Shellard being one of six senior members to leave, it seems like the banter era is well and truly over at De Montfort.

DMU told The Tab: “We are aware of the concerns expressed by colleagues. As part of the process of rebuilding trust, the university is committed to constructive dialogue with staff, students and the trade unions regarding potential improvements to strengthen university governance.

“We welcome the statement issued by the Office for Students that it is ‘looking into a number of regulatory matters relating to De Montfort University, following the university reporting an issue to us in the autumn’.

“The statement also stated that ‘while this work is continuing there is no presumption of wrongdoing by the university’.

“The university can confirm that it is happy to cooperate fully with the Office for Students in this matter. It would be inappropriate for us to comment further.”

The DMU UCU told The Tab: "We are disappointed that three members of De Montfort University’s governing body have seen fit to resign in quick succession.

"Whatever the truth behind the allegations concerning the governance at DMU such allegations have a harmful reputational effect on both students and staff, as well as the integrity of the university system as a whole."

Calling for a change in governance, the UCU also told The Tab they want a review into the structure of the uni's governance

The Office for Students told The Tab: "We are looking into a number of regulatory matters relating to De Montfort University, following the university reporting an issue to us in the autumn.

"While this work is continuing there is no presumption of wrongdoing by the university and it would be inappropriate to comment further."

The OfS wouldn't comment on whether anything could be read into the vanishingly small time between the announcement and the resignation, or on what the regulatory matters are.