The Crown season three is coming to Netflix!! Here’s everything we know

Ok, someone needs to tell Netflix to calm down. When we thought there couldn't possibly be any better shows coming, it's been announced The Crown is returning for it's third season this year. The Crown season 3 is officially coming, and it is dropping very soon.

Netflix has already announced the huge drops of The Bodyguard season two, Sex Education season two, You season two (and You season three!!!) and now this. 2019 is the year everyone's social lives officially end.

Olivia Colman as The Queen in The Crown season 3

The Crown is a drama that follows the political rivalries and romance of Queen Elizabeth II's reign and the events that shaped the second half of the 20th Century. It is everything you could want from a period drama, and so much more. Here's everything we know about the upcoming new season.

The cast of The Crown season 3 is:

Olivia Colman as The Queen

Helena Bonham Carter has previously been spotted filming for The Crown on the UCL campus.

Marion Bailey as the Queen Mother 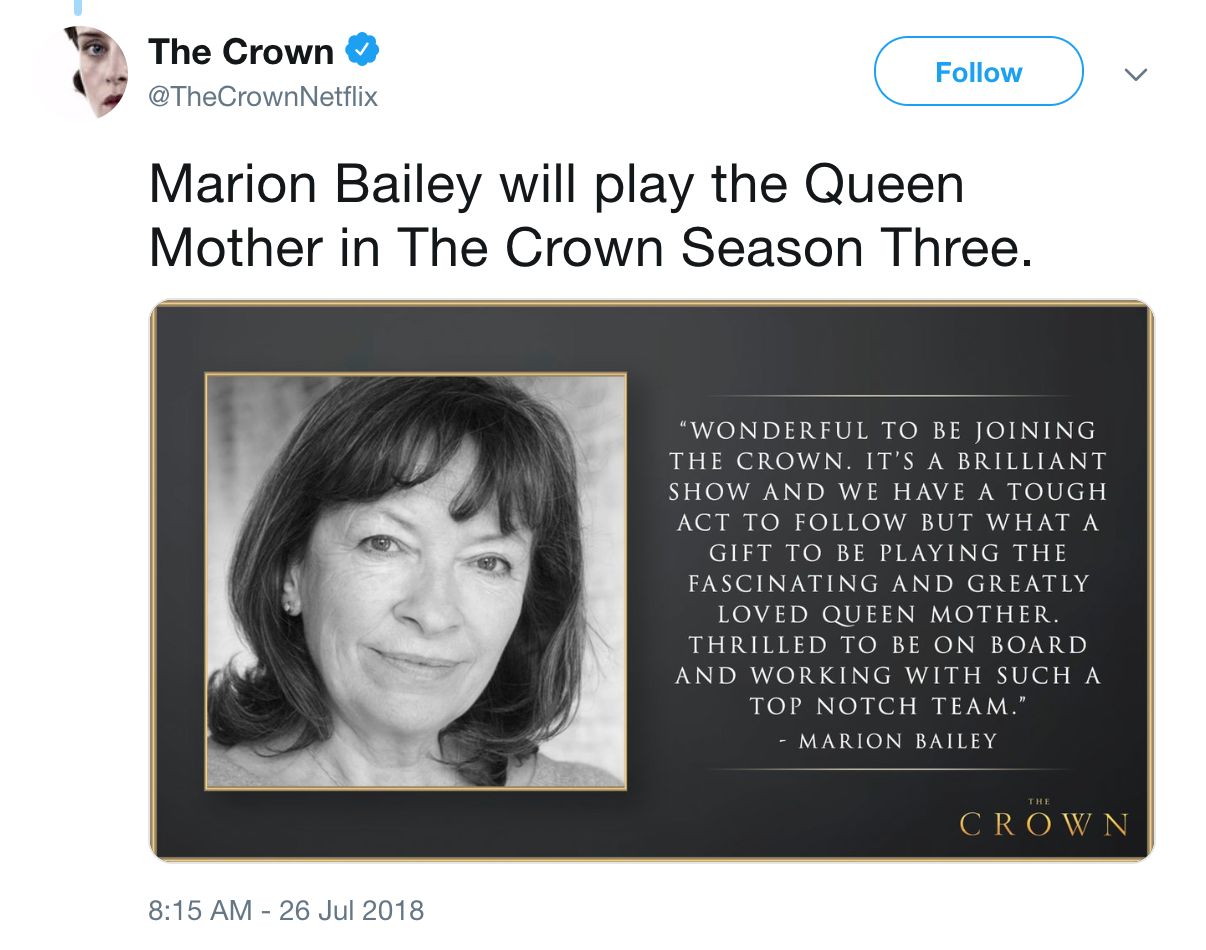 It hasn't been confirmed by Netflix that Gillian Anderson will play Margaret Thatcher in the new series, however The Sunday Times and Variety both report she has been cast to play the role of the UK's first female Prime Minister.

Gillian Anderson is a Netflix favourite, playing Jean Milburn in the series Sex Education. Jean Milburn is the mother of Otis (played by Asa Butterfield) who sets up a sex clinic at his school with classmate Maeve Wiley (played by Emma Mackey).

What time frame is The Crown season 3 set in?

Producers have confirmed that this season will be set in the 1970s. Each series covers a smaller time frame than the last, series one was eight years and series two was seven, so this season could be expected to cover a similar number of years.

What could the story be about?

Given the time frame, the plot will include Prince Charles meeting Camilla, which was in 1971. The show's creator, Peter Morgan, has said in the past however, that the show will not introduce Princess Diana until at least series four. He told Vanity Fair: "I’ve mapped out what might be a third season. If she were to be introduced, it’d probably have to wait until the fourth."

It has been reported by The Telegraph that The Crown are to cast Princess Diana as a 'desperate and lonely self harmer'. The advert for the role said: "She has to play charming comedy, flirt and social exhibitionist on the world stage, desperate and lonely self-harmer at her lowest ebb and the kind of psychological intensity of Mia Farrow in Rosemary’s Baby." Since it was advertised, Netflix cast Emma Corrin to play the role.

Olivia Colman revealed that Elizabeth and Margaret’s relationship is on steadier ground in Season 3. She told Vanity Fair: "They have to come to blows, but they’re sort of the only ones who know each other that well and the only ones that each other can really trust.

Helena Bonham Carter and Ben Daniels in The Crown season 3

Princess Margaret and Lord Snowdon's failing marriage is something that was also prominent in this time frame. The Crown's historian, Robert Lacey, told Town & Country: "In season 3, without giving anything away -it’s on the record, it’s history—we’ll see the breakup of this extraordinary marriage between Margaret and Snowdon."

The Duke of Windsor died in 1972, and Princess Anne (the Queen's daughter) married in 1973, and the Silver Jubilee was in 1977 – all events are expected in the third season.

In Britain at the time there were also strikes and the IRA bombings and the 1970s called for reform across British institutions – including the monarchy. There's a lot that went on in the 70s. that is all expected to be part of the drama.

When is the Crown season 3 release date?

The official release date for the Crown season 3 has finally been confirmed. It's coming on Netflix on November 17th. In the meantime, sit tight and re-watch the last two series' on Netflix.

Here's a teaser trailer from Netflix: