Love Island Gossip Column: Frankie asked ANOTHER girl to come to his hotel and WE HAVE SCREENSHOTS!!!

Just hours after he was caught cheating on Samira on video, Frankie tried to persuade a second girl to come to this hotel room. He told the 21-year-old who wishes to remain anonymous, to come to his room to "help with his hangover" following his appearance at Gallery club in Maidstone.

The girl told The Tab: "I was just out for the night didn’t realise they was doing appearances that night, next thing he was in the crowd dancing with a lot of girls.

"I just wanted a picture first, to which he started whispering in my ears about ‘come to my hotel’ etc. He looked really drunk to be honest but that’s no excuse."

The pair then exchanged messages on Instagram the following morning: 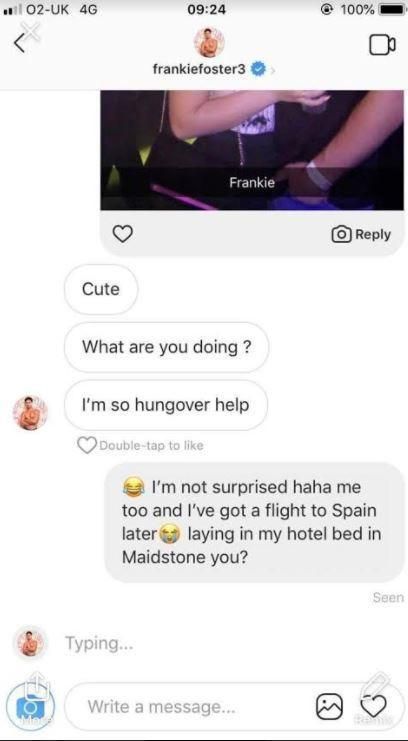 The girl has since messaged Samira to let her know what Frankie was saying to her and Samira has seen the message and followed her back.

After everyone found out that Frankie cheated on Samira and Samira dumped him, good friend Charlie took him out for dinner. They were pictured both in deep conversation at a Japanese restaurant in Chelsea and Frankie seemed to be drowning his sorrows in beers.

Samira's rep has said: "Samira will be taking some time out from her relationship with Frankie to focus on herself and future work opportunities."

On BBC Radio One this morning, 26-year-old Jack admitted: "Look, the first time, as you can imagine… it wasn't a great performance from me. I'd built it up for a long time mate! I tried to make it as romantic as possible but, you know…" It happens to the best of us mate.

Jack revealed his must have back to school stationery

Even though he's taking a break from selling stationery for a while, Jack revealed some of his favourite products. He spoke about pens, paper and even a notepad you can microwave. But his current favourites are magnetic pens that join together to form shapes. Watch the very wholesome video of him talking about them here.

Great meeting Eamonn and Ruth on this morning thanks for having me really enjoyed it! @ruthlangsford @eamonnholmes ✏️

Megan doesn't regret £25k worth of surgery, insisting she was comfortable with how she looked then and is comfortable now

Megan revealed she spent around £25,000 on surgical procedures over the past few years, including breast enlargement, jaw surgery and a bum lift.

She told Grazia magazine: “I worked so hard to get all the money I could and I feel like I can spend it any way I want. If it makes me feel better I don’t know why that’s seen as a negative thing? I was still beautiful in my own way back then, I’ve just changed a few things. I was comfortable then and I’m comfortable now.”

Also, she just looks phenomenally fit in this Grazia photoshoot

Behind the scenes with @MeganBHanson ?

Suggestions include: "They key to 16 abs."

WIN a years free training by me ????? BEST NAME WINS . . . What’s going on guys, so I’m launching adamcollardfitness.com very soon and will be bringing you a ‘Netflix’ like subscription to fitness. A ‘hub’ where you will be set training programmes, nutrition plans, recipes and more . . . Now I need name ideas! Whoever can come up with a name for my so called ‘hub’ can win a full years free membership once it launches in the next couple of weeks? Go ??? comment below!

Eamonn Holmes and Laura are going on a lunch date

Laura revealed she fancied the 58-year-old presenter when she was on Love Island. She was interviewed by him on This Morning yesterday and the pair revealed they're going on a lunch date soon. His wife Ruth, who also presents the show, did not seem impressed.

Paula are STILL not official

Laura said on This Morning: “We are exclusively seeing each other. There is a lot of pressure on us.” Paul added: “Typically we are, essentially we are.” Don't worry Laura, commitment issues are definitely not a red flag.

Since leaving the villa, Laura has had her lips plumped, cheek fillers and a small nose job

As per our earlier posts of this week, the very lovely @lauraanderson1x came up by our beautiful Harley Street Clinic to have a few tiny tweaks from one of our doctors. It's worth noting that this was only a couple of days ago, and of course she's still very puffy, however the above picture taken immediately post procedurally – before her swelling kicked in will give you a beautiful idea of how well it will settle. Swelling is always worst, 48 hours post procedurally. We always say, that if you love your lips a day after augmentation, you'll probably want more when they settle down! However if they look overly puffy when done, that almost certainly they will look perfect when oedema has subsided.. In addition to her lips being augmented with aliaxin GP, she also had a slight cartilage deficiency in her nose which we gently corrected and straightened with Aliaxin EV. We added some midface volume and cheekbones to refresh and rejuvenate her face, and then the famous Profhilo bio-remodeller – which hydrates the skin from the inside out and gives the appearance of an airbrushed and smoothed face. We think it has genuinely taken years off her, even though she was absolutely stunning to begin with. It's been an honour working with a truly genuine, and lovely person inside and out. Our team loved the class and dignity she showed on @loveisland, and supported her throughout. She's amazing, and we cant wait for all puffiness to subside and the true results to show through. Remember, aesthetics treatments are not to be taken lightly, and we warn everyone pre treatment, what to expect in respect of swelling or bruising. The average bruising rate is around 1 in 10, but our audits show only 1 in 50. To book in to one of our clinics in London, Liverpool, Greater Manchester, Birmingham, Dublin in Ireland, Dubai in UAE or Beverly Hills in California USA – you can book via our online portal at www.consultantclinic.com or email us at [email protected] #lauraanderson #loveisland #lauraanderson1x #HAderma #profhilo #ibsa @lauraanderson1x @paulknopsie @loveisland @itv #lipaugmentation #profilo #liquidrhinoplasty #jawlinecontouring #jawlinefiller #cheekbones #cheekfillers

She told The Daily Star: "I was trolled by nasty girls who told me I looked like a man, but honestly, it’s cool. If I didn’t have these strong arms and legs I wouldn’t be able to stand up on a surfboard and travel the world doing what I love.

“I went on Love Island to inspire young girls to be sporty and show you don’t have to have a full face of make-up and perfect hair to feel good about yourself. Being physically fit and healthy can do that, too.

"I was always insecure about my shoulders, but have grown to love them. For all the girls with the big shoulders – they are your superpower."

• I’ve got a text! Oh wait, it’s the Love Island Clubbers of the Week