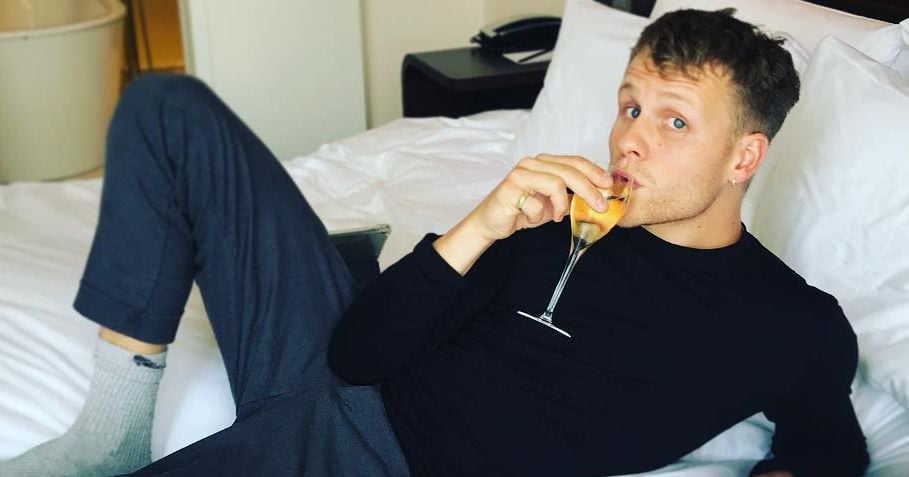 You’re all invited to our wedding x

To all fans of Mamma Mia 2: Here We Go Again, we’re about to do you a service. I know you all finished watching it on Netflix this weekend thinking “who the hell was that guy playing young Bill?” Well let me fill you in, it’s Josh Dylan. And I am in love with him.

We were caught hook, line and sinker with this young Bill during Mamma Mia. Young Bill was an adventure, he was an insanely gorgeous break up rebound for Donna after young Sam, and his eyes are so darn blue. “Be still my beating vagina.”

So, who is Josh Dylan? And why have we never seen his pretty angel face before?

Young Josh and Young Bill have a lot in common. They share the same amazing Big Dick Energy that we cannot get over and want around us all the time. Let me be Donna in that blue sweater when he says “just come here”. YES SIR.

He’s studied at the Guildhall School of Acting and Drama

He only graduated from acting school (read: sensitive and in touch with his emotions) five years ago. He starred in 10 plays while at acting school and he is amazing at singing, dancing (as we saw in Why Did It Have To Be Me?) and rugby.

Two of the most dangerous men on the planet. #badboyz #training #fightclub ⚡️⚡️⚡️🤛🏻

But before this, the only other two roles credited on his IMDB were the role of Captain Adam Hunter in “Allied” with Brad Pitt and Marion Cotillard, and the role of Bland in “The Little Stranger”. His permanent attractiveness suits these two characters, but he peaks with his deck shoes, yacht and Croatian sea sets.

Today is the first day filming for me on 'Mamma Mia 2'. But here's a throwback to the first film I ever did where I was a sweaty mess in a toilet and Brad Pitt sent me on a death mission ☹️ #Allied #CaptainAdamHunter #BradPitt #Zemeckis #gkfilms

Major fun filming #thelittlestranger . @pollyannabennett is 100% responsible for all drunken shapes thrown by yours truly

He adores cats and would do anything for them

Guys who like cats are a very rare kind who love independent relationships. Wolfgang, his own kitty, features in many photos on Instagram and is almost as photogenic as his owner.

Fuck the three musketeers, Donna’s young flings are the most iconic trio of the 21st century. LOOK AT HOW GOOD THEY ALL LOOK I’M SCREAMING

A gaggle of geezers.

Josh has charmed Dame Judi Dench, swooned with Judy Craymer and his mentor is apparently Stellan Skarsgård. Piers Brosnan is okay too.

Down the pub with chief troublemaker. I love her dearly 🖤

He’s super fit in every way, so glad you could make it to my Ted talk.

3) Tinder and Bumble: The Tab’s guide to using dating apps