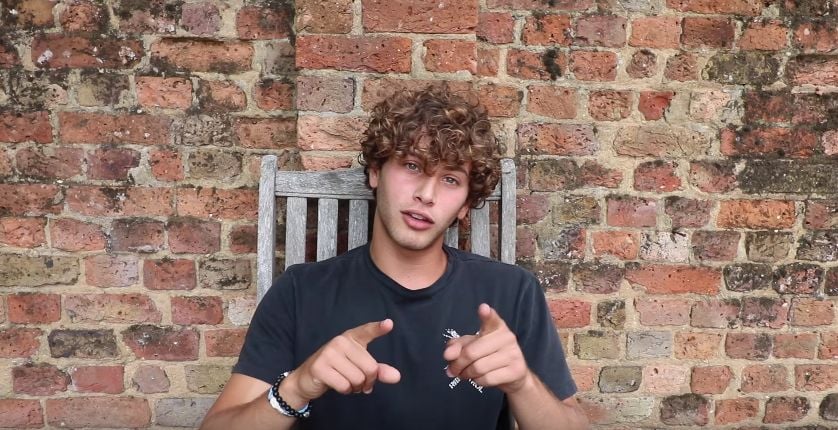 Behold! Here’s every desperate attempt Eyal has made to get famous

Warning: He puts a fidget spinner on his nipple

In the space of barely two weeks, Love Island's Eyal has gone from waffly but harmless villa hippy, to laying out the extent of his full-bore ambition and being made to smell Adam's beads. He's intent on "playing the game" and succeeding at any cost.

Just as you can't fatten a pig on market day, the hunger for fame isn't one you wake up with the night before you start filming an ITV2 reality show. Over the years, Eyal's tried a sickening range of things, all in an attempt to get noticed for the big time.

Here's everything he's done in an attempt to get famous.

Eyal went to the same drama school as Rita Ora and Amy Winehouse, where he was put into tween supergroup EverYoung. Sure, they reached number 30 in the Indie Charts, it's no big deal.

As tween pop bands go, EverYoung sit only slightly above Party Posse, the group Bart, Milhouse, Nelson, and Ralph are moulded into and made to sing "Yvan Eht Nioj" in The Simpsons.

Have sympathy though, Eyal was 16 and by his own admission, "kinda got sold the dream that they were gonna turn me into a European superstar." Since we'll never know what was actually said to convince him of that, we can only assume it was: "America? Don't push it, but trust me kid, you'll be massive in Sweden."

Getting bollocked by legendary actor Jeremy Irons in a music video

As the voice of Scar in The Lion King and a Tony award winner, Jeremy Irons has scaled the heights of stage and screen. In many ways, he's very different to Hayley.

Crucially, though, they both share the inability to get Eyal's name right.

"We'd like that coffee today, Ale" are surely the finest words to come out of Jeremy Irons' mouth since he snarled "long live the king" in the Lion King's saddest scene.

Doing some modelling for Boohooman

For someone with such an extensive range of modelling poses, it's nice to see here that Eyal is holding the walls like he's fighting off a K hole.

Balancing a fidget spinner on his nipple for Playboy

Explaining, in depth, the philosophy behind his deep Instagram captions

If you were starting to think Eyal's efforts to scale the icy precipice of fame and fortune were amounting to little more than a discarded collection of hair curlers at base camp, this interview will change your mind.

Already famous enough to be the subject of an 18 minute interview, Eyal uses the platform to explain just why his Instagram captions are so deep.

"I do quite a lot of reading. I read quite motivational books that are just about life and helping others and really manifesting your thoughts and your desires into reality," he says.

"The kind of quotes I put are just meaningful things that hopefully make you think a little bit, not just about yourselves, but others and helping others and doing selfless acts of kindness in order to make yourself happier. Doing things for other people will make you happy."

Given the current dearth of folksy sayings The Youth Of Today have, I have decided to coin a little nugget of wisdom:

It has one video. He makes monkey noises. He says "I love green" and tries to pull a tree with the same nauseating graft he uses on Megan.

Aiming to motivate, inspire, and tell people the truth about life, Eyal promises a weekly vlog, but there's only one video.

According to Eyal's LinkedIn profile, he's "worked on and featured in Rita Ora's music video Poison."

Now, I've watched this video a lot. I've analysed the possibly-Eyal guys Rita Ora flirts with and gone frame-by-frame through the wider crowd shots. After hearing more of this song than anyone should have to, it doesn't look like Eyal's in it.

Definitely starring in this video

You say you've never heard of it, but it's got 36 million views.

And now, going on every reality TV show that will have him

He wouldn't stop at Love Island, he's tried Celebs Go Dating too, and in the new year he'll be staring in Celebs on the Ranch. When will this end??

He's also ended up getting with absolutely everyone – including Rita Ora, and after the Love Island Christmas Reunion show, it seems Kendall is his latest thing.

• Celebs on the Ranch: The new reality show that will fill our Love Island Void

• How to successfully slide into my DMs, by Eyal Booker