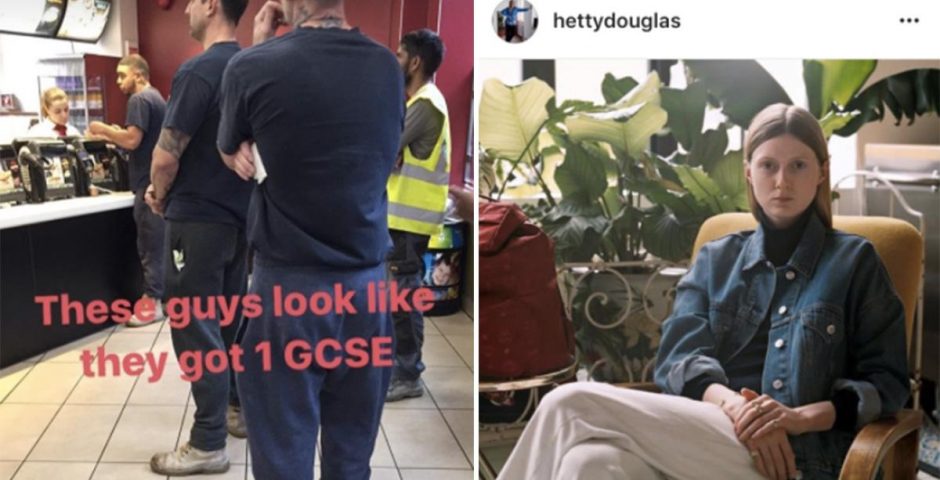 We all know someone like Hetty Douglas, the artist who mocked workmen in McDonald’s

Hetty Douglas is an artist and recent graduate from the University of the Arts London. Originally from Nottinghamshire but now living in Peckham, she was hounded on social media last year for posting an Instagram story deriding workmen in the queue at McDonald's for looking "like they got 1 GCSE".

and you look like a spoiled rich girl gentrifying south London pic.twitter.com/0bysFYfc9c

From her social media, Hetty fetishises working class culture in much of her work and the things she says in interviews, either in order to crack a shit joke or in an attempt to be 'safe as fuck'. She says she's from 'Shottingham', yet is from a creative background – her mother and brother are both artists, too.

The real reason so many people have rounded on Hetty is because we all know someone exactly like her. Posh, privileged and seemingly not really aware of what's going on in the world around them.

This upbringing has afforded these types of people a lot, but sometimes it appears as though they don't have the empathy to think about anything from the point of view of people who are not like them. They probably saw no problem with chav socials at uni, thinking them more of a tribute to their 'chav phase' when they were 16.

They will inevitably move to South London after graduating and take on words such as 'peng'. They believe their creative license extends to doing or saying whatever they want, even on social media for anyone to see. But everything is generally okay in their world, as long as their mates are finding them jokes.

In a profile on creative agency Babyface, now taken down from the site, as have many other online interviews, she offers her best advice as: "Be honest and kind to yourself, and know you're always allowed to be better." She continues in the interview to ask for sympathy over having to hold down a job while doing her own work in order to pay for rent in London, blissfully unaware of the irony of what she's saying.

All of this shouldn't come as a surprise when youth media seems happy to excuse your privilege as long as you're pretty cool.

Vice have published a condemn-excuse of what's gone on (her sick threads mean she can't be all bad surely) and Dazed, the must-read site of all the very worst cool fashion people, profiled her lovingly.

From their point of view, they're untouchable, and they always will be to a certain extent, but it's always reassuring when the Hettys of this world are taken down a peg or two.

We all know someone like Hetty – but being edgy doesn't give anyone an excuse to ridicule people worse off. This isn't art, it's just another example of the privileged mocking the working class.