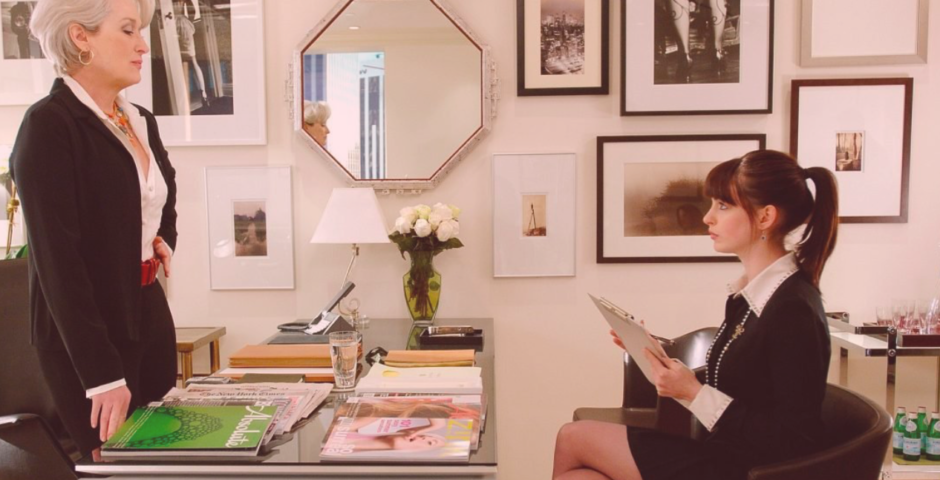 I think we need a jacket

Before we even begin this scathing exposé on what might possibly be the greatest movie — no, film — ever made, we need to set the mood. Hit play on that KT Tunstall song from the opening scene and let’s dive the fuck in.

To be sure, The Devil Wears Prada is a cinematic and sartorial masterpiece. We’re blessed with not one but two hot love interests (four if you count Stanley Tucci and the guy who plays James Holt, which obviously I do). Patricia Field did the costuming — the woman behind all the fashion on Sex and the City — giving new life not only to Madonna’s Vogue, but also Chanel boots in general.

The movie’s dialogue is, in a word, iconic. Consider, for example, the infamous cerulean monologue:

“But what you don’t know is that that sweater is not just blue, it’s not turquoise. It’s not lapis. It’s actually cerulean. And you’re also blithely unaware of the fact that in 2002, Oscar de la Renta did a collection of cerulean gowns. And then I think it was Yves Saint Laurent… wasn’t it who showed cerulean military jackets? I think we need a jacket here. And then cerulean quickly showed up in the collections of eight different designers. And then it, uh, filtered down through the department stores and then trickled on down into some tragic Casual Corner where you, no doubt, fished it out of some clearance bin. However, that blue represents millions of dollars and countless jobs and it’s sort of comical how you think that you’ve made a choice that exempts you from the fashion industry when, in fact, you’re wearing the sweater that was selected for you by the people in this room from a pile of stuff.”

I’m sorry, but The Bard could never. “The Chanel boots? Yeah. I am” is more cutting and poetic than anything William Flopspeare could ever craft. Every line in Julius Caesar, The Tempest, and Romeo and Juliet combined is a hollow shell compared to the passion of, “There’s like $8 worth of Jarlsberg in there!”

But this story isn’t about that. It’s not about that fact that Nate was a twat who was totally unforgiving of Andy’s brutal work schedule. It’s not about her bitchy friends who failed to support her even though she gave them Mason Pearson hairbrushes and a little Clinique. Not to mention the new Marc Jacobs that’s sold out everywhere. This article isn’t even about the revolving door of clothes so beautiful I would physically remove my own skin with a potato peeler for the opportunity to wear the all-white look in the makeover montage.

This story is about the unfair portrayal of Miranda Priestly, the actualhero of the movie.

It was Miranda who was the protagonist, the visionary, the star and — most importantly — the victim. Miranda, the be-all-end-all revolutionary of the fashion world, had a lot on her plate. Literally and figuratively, because that bitch ate a lot of steak. Being an editor is hard, being an editor-in-chief is harder, and being more or less the entire creative director of the major publisher’s flagship publication is the hardest.

And what did Andy do? Grumble and complain and wonder why she didn’t get a gold star on her homework at the end of the day. Miranda is made out to be some kind of hellish devil snake-bitch (same) for demanding competence from the person she was payingto assist her. At the end, with mere days to go before completing one year under Miranda and unlocking myriad opportunities in the cut-throat editorial industry, dumbass Andy threw her Sidekick into a fountain. And her career, probably.

More than a decade after the premier of the greatest film of our generation, the time has come for me to take a stand. I can’t idly sit here on my computer looking at memes and tweeting jokes about how I want to die while scores of young, impressionable children get the idea that Miranda was bad and Andy the victim.