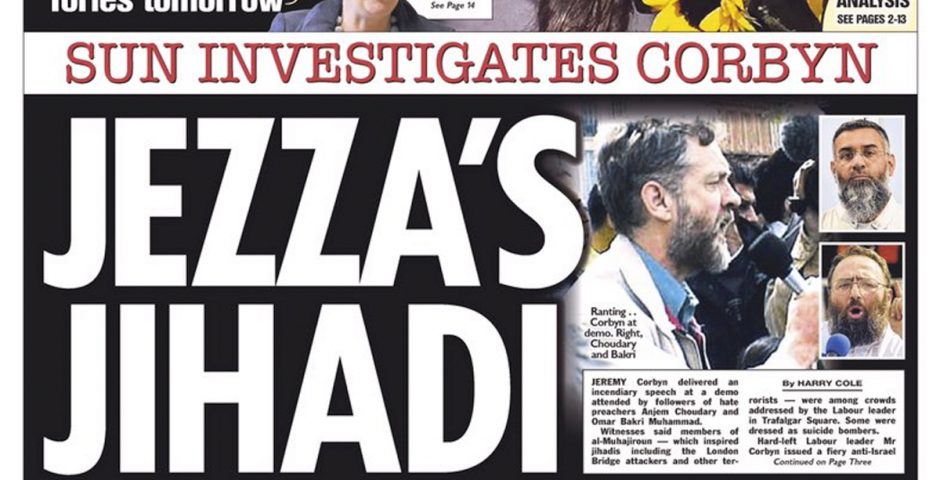 Unelectable, deluded, and facing ‘electoral annihilation’: What they said about Jeremy Corbyn

This is what the columnists wrote

The Labour leader’s youth-led surge, which wiped out Theresa May’s majority on Thursday and threw the Tories into meltdown, wasn’t picked up by the press or projected by most of the polls.

In the end, Corbyn increased his party’s share of the vote by more than any Labour leader since 1945.

This is what some of Britain’s newspaper columnists predicted for Jeremy Corbyn:

“This is painful to watch. Labour now dwells in a kind of limbo. Nothing can move forward until he goes, and he will only go in an electoral wipe out…What vainglorious egotism, this willingness to kill a party for the thing he loves. One fundamental of populism is simply that it is popular. He is not.”

“The Tories have gone easy on Corbyn and his comrades to date for the transparently obvious reason that they want to keep them in charge of Labour. In an election, they would tear them to pieces. They will expose the far left’s record of excusing the imperialism of Vladimir Putin’s gangster state , the oppressors of women and murderers of gays in Iran, the IRA, and every variety of inquisitorial and homicidal Islamist movement, while presenting itself with hypocritical piety as a moral force. Will there be 150, 125, 100 Labour MPs by the end of the flaying? My advice is to think of a number then halve it.”

“The stench of decay and failure coming from the Labour Party is now overwhelming. From the beginning we were opposed to the Corbyn leadership but, in the spirit of plural debate, happy to open our pages to him and his confidants. Our view was that Corbyn was ill-equipped to be leader of the opposition and, indeed, an aspirant prime minister…There was nothing in his record to suggest that he could remake social democracy or under­stand, let alone take advantage of, the post-liberal turn in our politics. The decline of Labour pre-dated Corbyn’s leadership, of course, but he and his closest allies have accelerated its collapse into irrelevance.”

We have a rather spectacular issue this week… Here’s the cover: pic.twitter.com/gKCtTL9tVA

“Some “moderate” Labourites will welcome the election too, as a chance to reclaim their party. It’s like ripping off a plaster: the swift burn is preferable to the slow peel. May has effectively launched this year’s Labour leadership contest and handed Corbyn a spade to dig his political grave. It’s better for Labour’s electoral prospects that this happens now, since come autumn the hard Left was going to try to reduce the support needed from MPs for leadership contenders…This comes at a high price. Hard-working, popular MPs will lose their seats. But having hacked itself to shreds, Labour must now take the lifeline. That means ensuring the hard Left are deservedly tarred by the coming defeat, lest Corbyn otherwise hangs on.”

“Corbyn’s cadre await the rout with open arms. A growing sense of puzzlement pervades Conservative campaign headquarters. Is their traditional Labour opponent at general elections really fighting to win? Or is something else going on? Obviously the individual Labour candidates will be trying their utmost to get the most votes they can. But the Tories have the peculiar sense that the Labour leadership is not properly trying.”

“I’d been hearing increasingly wild stories about feedback on the doorsteps. One Tory MP told me any seat with a Labour majority of 8,000 or less was a target. Labour MPs said they were drawing that line at 10,000. Then I was told about the Bunker Project. So great is the potential scale of the meltdown, Labour moderates have identified a select group of MPs whose seats must be defended at all costs. They will receive additional financial resources and extra activists.”

“The opposition leader has taken his party deep into the realms of unelectability and irrelevance. Some say he is a nice man, trying his best in a difficult job that he never wanted. That would be true if he had stepped aside by now for someone more suited to the role. Even Mr Corbyn must realise how incompetent he is at leading a serious political party.”

“Corbyn’s Labour Party faces electoral annihilation. Their poll ratings will deteriorate even further when the public finally starts to pay attention properly in the run-up to the next election. Corbyn would be lucky to get more than 26 per cent of the vote – and the Tories will be back over 40 per cent for the first time since John Major…The truth is that it is no longer possible for any sensible Labour politician to serve in Corbyn’s shadow cabinet while retaining their self-respect.”