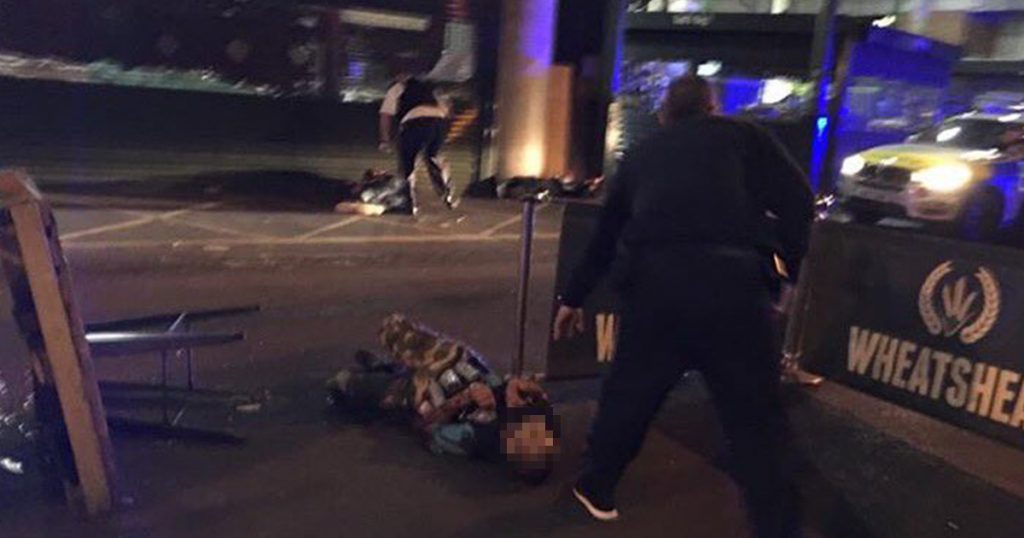 We spoke to students caught up in the London Bridge attack

‘We heard more screaming, and a man shouted to “get down”’

Last night, on a warm summer evening in central London, terrorists carried out an attack on London Bridge and Borough Market. First running down pedestrians in a van, then going into restaurants, stabbing those they came across. In the chaos, people ran and hid under tables, before police came to their aid.

We spoke to students who were in the area when the attacks occurred.

First year King’s College international relations student Ellie Fishleigh was having dinner with her mum in Tito’s Restaurant when they noticed a man in a blood-stained shirt sat on the doorstep surrounded by other people.

Photo from the scene of #BoroughMarket attack appears to show London attacker with canisters strapped to his body https://t.co/wwFwfz9bTe pic.twitter.com/iRl5za3FXT

In a Facebook status, she described what it was like being in the restaurant with victims of the attack:

“As my mother was requesting the bill after our meal in Tito’s Restaurant, London Bridge, I noticed a man in a blood-stained shirt sat on the doorstep surrounded by other people. One man raised his hand toward a police officer standing alongside and his arm was completely covered in the victim’s blood.

“The waiters refused to let customers leave the building, though the doorway was blocked by the victim. A woman from a nearby table ran frantically between the doorway and her party – from what I can tell, the victim was her friend who popped outside.

“Several minutes later, the bleeding man was brought into the building, and a group of around 10 people ran up the stairs screaming. I was sat at the table nearest the stairs and entrance; believing the people were running from the perpetrator, I joined them in running up the stairs. I made it halfway before realising my mother was standing in shock at the table and turned around.

“At this point I realised the group running up the stairs included a second stabbing victim, who was topless and covered in blood. I walked back down the stairs (the victim’s blood spilt onto my hand as he passed) and joined my Mum.
20:30 We then heard more screaming, and a man shouted to “get down”. We all got on the ground, and some hid under tables. I turned to see what was happening, and a fellow customer told me “don’t look at them”.

“We stayed on the ground for around 20 seconds before the shutters were closed at the front of the building. I saw two or three people in high-visibility jackets with ‘security’ written on them. By the entrance I saw the first stabbing victim lying on the ground receiving CPR. A community police officer announced his presence and assisted the first victim. I don’t recall seeing the second victim after he went upstairs, but my video shows the officer later ran up to see him briefly, as did a police officer.

“The community police officer told us to prepare for an evacuation. We held hands with strangers. The shutters were opened and police guided us out of the building and onto Borough High Street. All cars had been abandoned, there was a sea of perhaps 200 blue lights emanating from the dozens of emergency vehicles. My mother says she saw another victim receiving CPR on the street. We were escorted to St. Thomas Street, told not to run but to hurry. My mother and I walked about 200m down St. Thomas Street to the entrance to the train station, where the other diners were standing. There were no police officers down this road, though a few plain-clothed people wearing plastic medical gloves accompanied us.

“We found that all trains had been cancelled, as had all local buses. From inside the station, we took the escalators up to the station’s main entrance by the Shard reception and asked security guards if they knew where we could take a taxi, but they only advised us to walk down St. Thomas Street further and handed us some water.

“We walked down Bermondsey Street. When I recognised the area, I headed for a bus stop on Old Kent Road. As we took the bus we continued to hear sirens and see emergency vehicles passing. Even in New Cross I saw more police than usual. We then arrived home.”

“The proximity of where I work to the bridge (London grind is the first building off the bridge) we were the first to see the bodies across the bridge other than pedestrians on the bridge. I didn’t see the van and I believe it stopped a building along from us.

“About 5 to 10 minutes later with total silence in the restaurant (apart from many people crying and panicking), we were told to evacuate as quickly as possible which is when we were told there was a suicide vest on the attacker(s). we then ran fast across the bridge to just outside Bank station where a lot of people were crying injured and distressed, I could see people covered in blood and bandages. It was terrible.”

First year Comp Lit student Esme Jones told us she was at Nando’s in Borough when they had to be evacuated: “My student accommodation is London bridge, I was in the Nandos near there with two friends from home when we were told there had been a shooting and we were put on lockdown.

“We had to turn off all the lights and go to the back of the building and sit on the floor and because everyone was panicking and no one knew what was happening there were loads of rumours going round of a mass shooting and people were ringing their families almost to say goodbye.

Tom Haynes, a Kings Student told The Tab: “My friends and I were watching the footbal in Dover Castle, not far from where the attacks took place. When we came out, some guys smoking cigarettes told us about a terrorist attack in Borough Market. We saw Police cars and ambulances racing towards the area. The whole street was rammed and people were running away from the high street.

Helicopters were heading towards London Bridge. We made our way home mostly on foot, and we could see the response effort all over South London.”