What your course looks like, according to everyone else

Obviously the History student is wearing a turtleneck

Sociology students are always blonde – it’s science. And as for Science? They’ll probably be wearing a hoodie, looking tired, slouching their way to yet another lab session.

Despite what you may think, it’s as easy to categorise people by their subject as it is to differentiate between species in the wild.

Don’t believe us? Take a look below to see where you fit in. 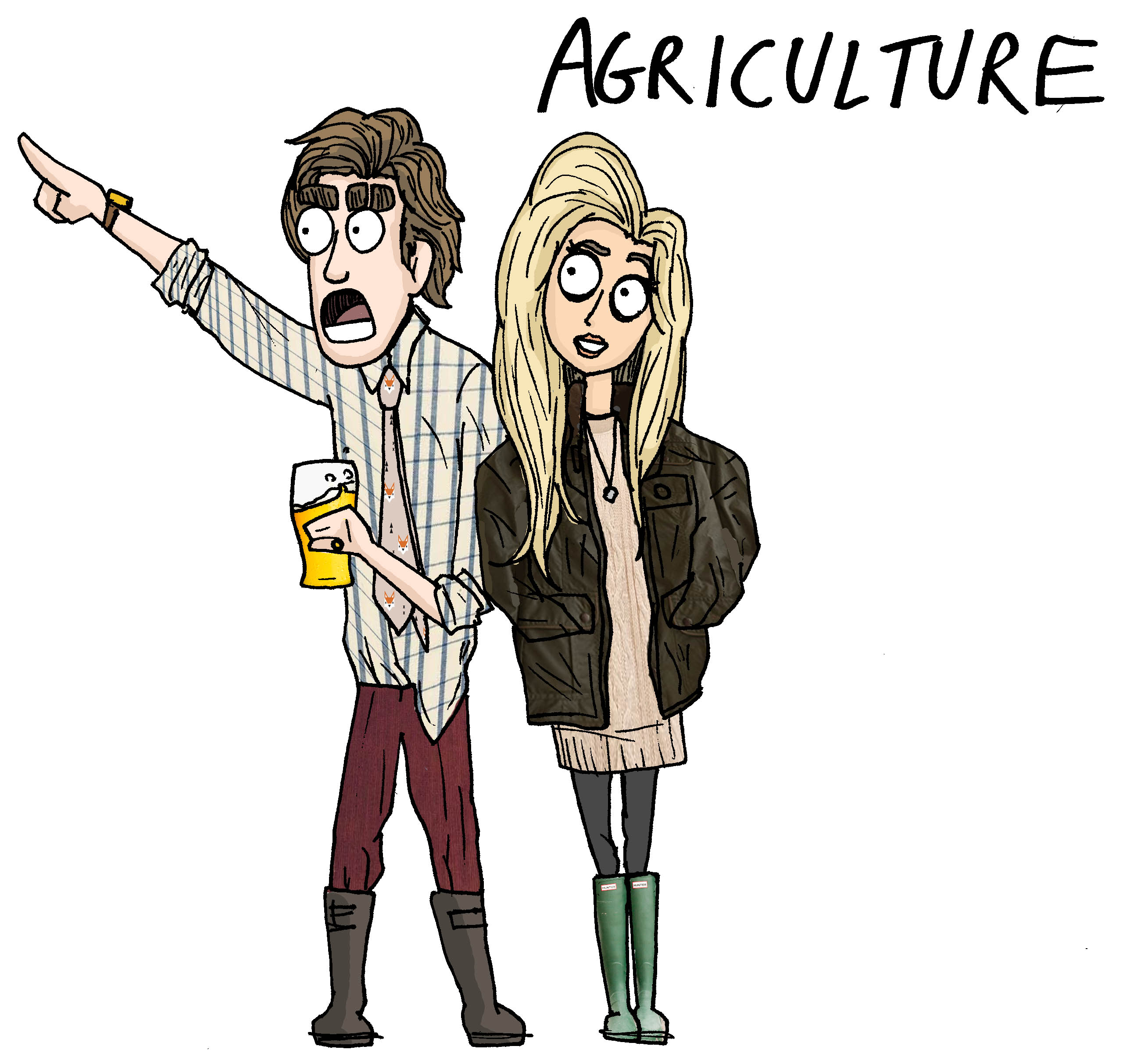 “A fleece jacket or gilet, wellies and a jumper saying that they’re part of the Agric Society.” – Victoria, Reading

“They have curly-ish floppy blonde hair or short, dark hair. At the start of the year they will often have either eyebrow slits or entirely missing eyebrows. They’ll wear a John Deer shirt under a fleece gilet, with cream or brown chinos – and will always have a pint in their hand.” – Bella, Newcastle

Does it even need to be said? Agrics are probably the most easy-to-spot stereotype, mainly because even when on campus they’re always dressed for the farm, with clothes so expensive and impeccable it’s a shame they’re always covered in mud – and beer. 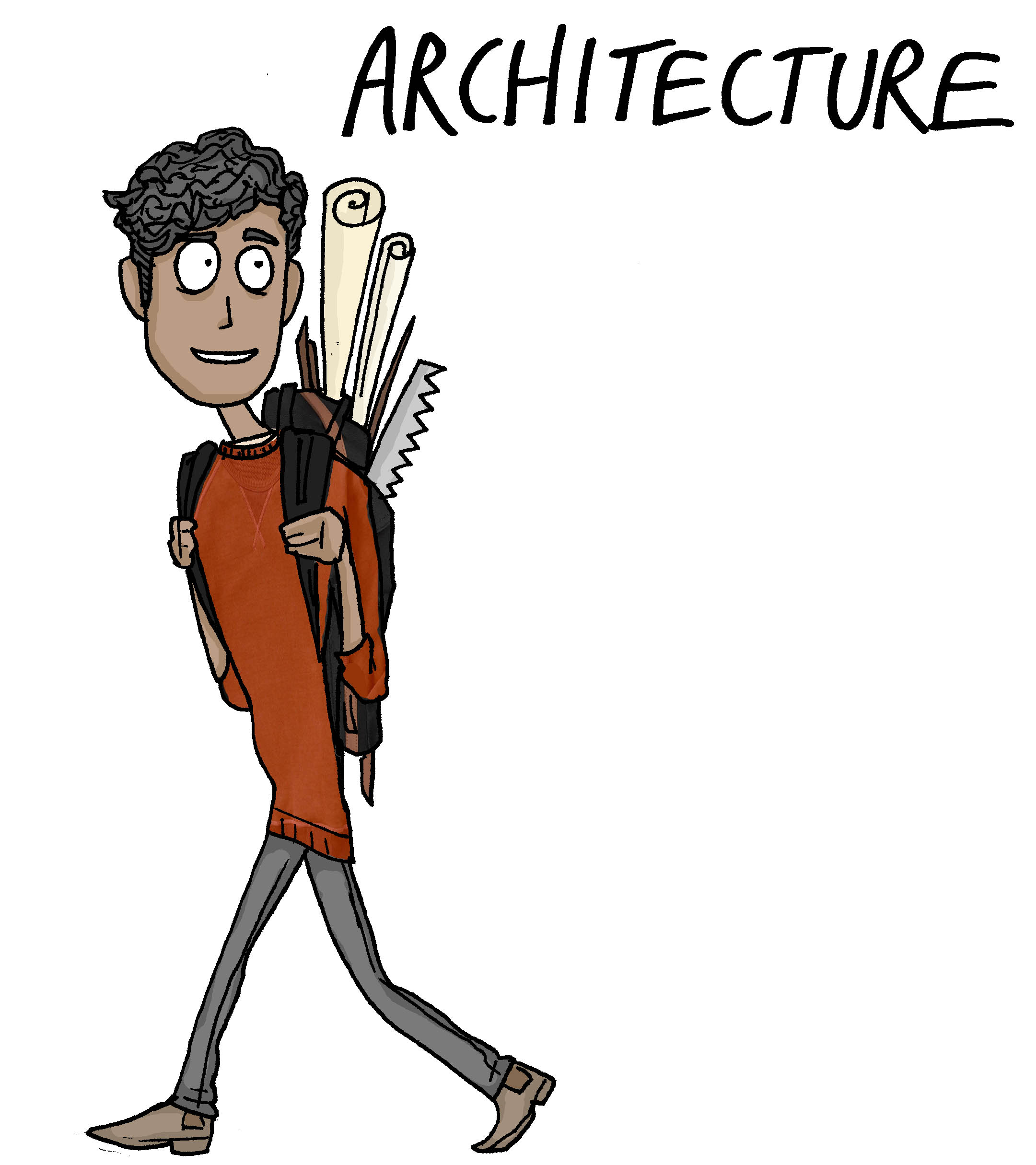 “You can spot an architect from a mile away. They will be constantly dressed to the nines with stupidly lush jackets but probably have paint stains all over them. Chelsea boots are a must-have and a backpack with all sorts of building materials sticking out. No-one knows why they dress so well just to walk from their messy rooms to the messy studio.” – Russell, Oxford Brookes

They’ll be designing your house one day, so it’s no surprise they can put together a decent-looking aesthetic – even though their fashion choices are often as stuffy as a Grade II listed Georgian townhouse. 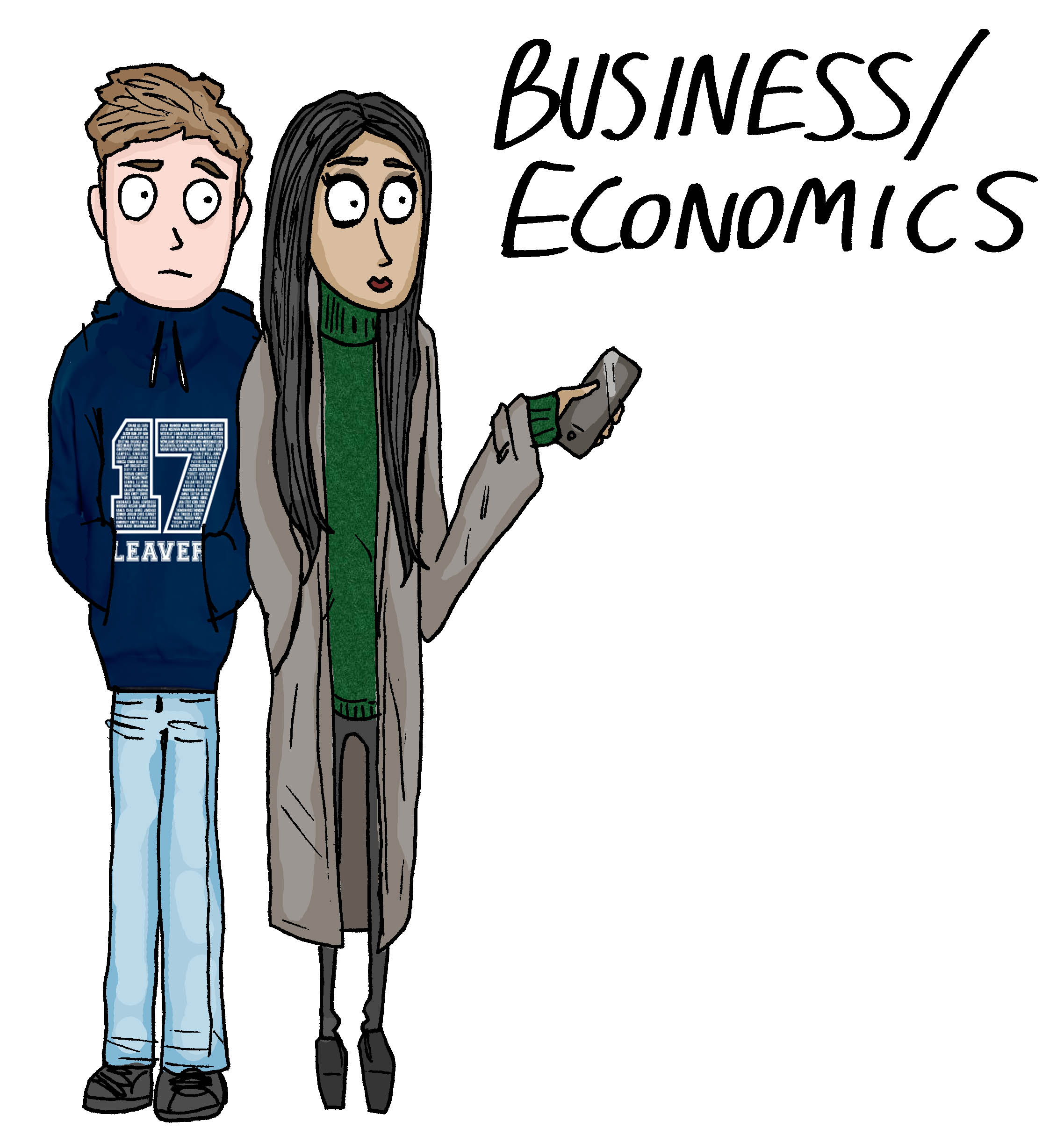 “Leavers hoodies, straight-leg jeans. The girls will have grey duster coats and over the knee boots.” – Charley, Royal Holloway

“The Economics girls are always really glam in comparison to the boys.” – Bobbie, UEA

They said it. The girls are well-put-together, the guys are decidedly not – leavers’ hoodies are a must. And before you say it, we’ll counter: Economics and Business students are no different. 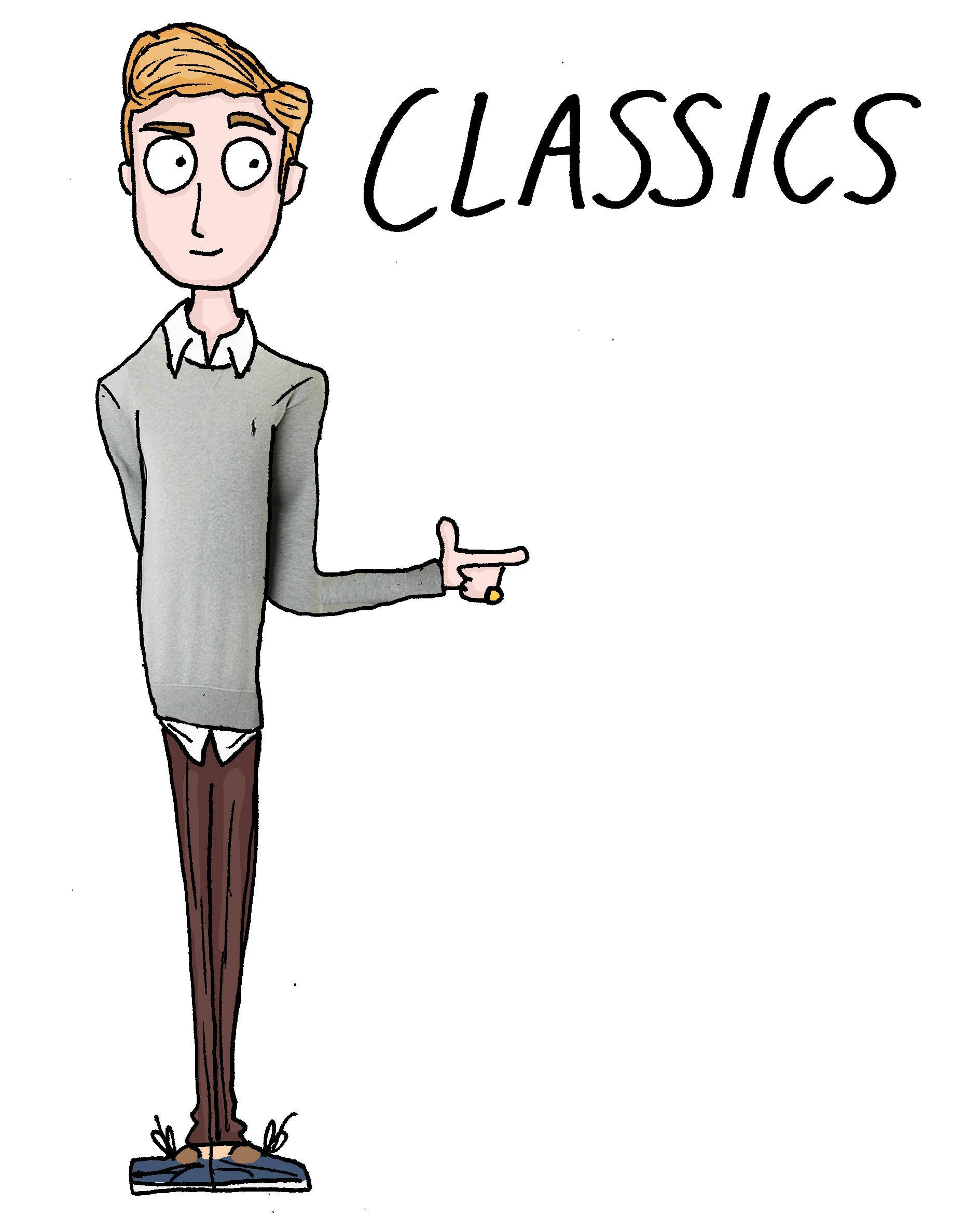 “All of the classics students at Exeter wear red chinos and have white shirts that stick out from under their Ralph Lauren sweaters.” – Meg, Exeter

“They’re definitely the ones to wear tweed suits/waistcoats/bow ties to uni.” – Sammy, York

“It’s a mix of either signet rings and caps or just a complete inability to escape 2005 fashion. There’s the boarding school Barbours who have been learning Greek since aged 3, with their signet rings and jumper/shirt combos. Then there’s the people who spend so much of their lives reading Homer that they haven’t bought clothes since 2005.” – Amelia, Liverpool 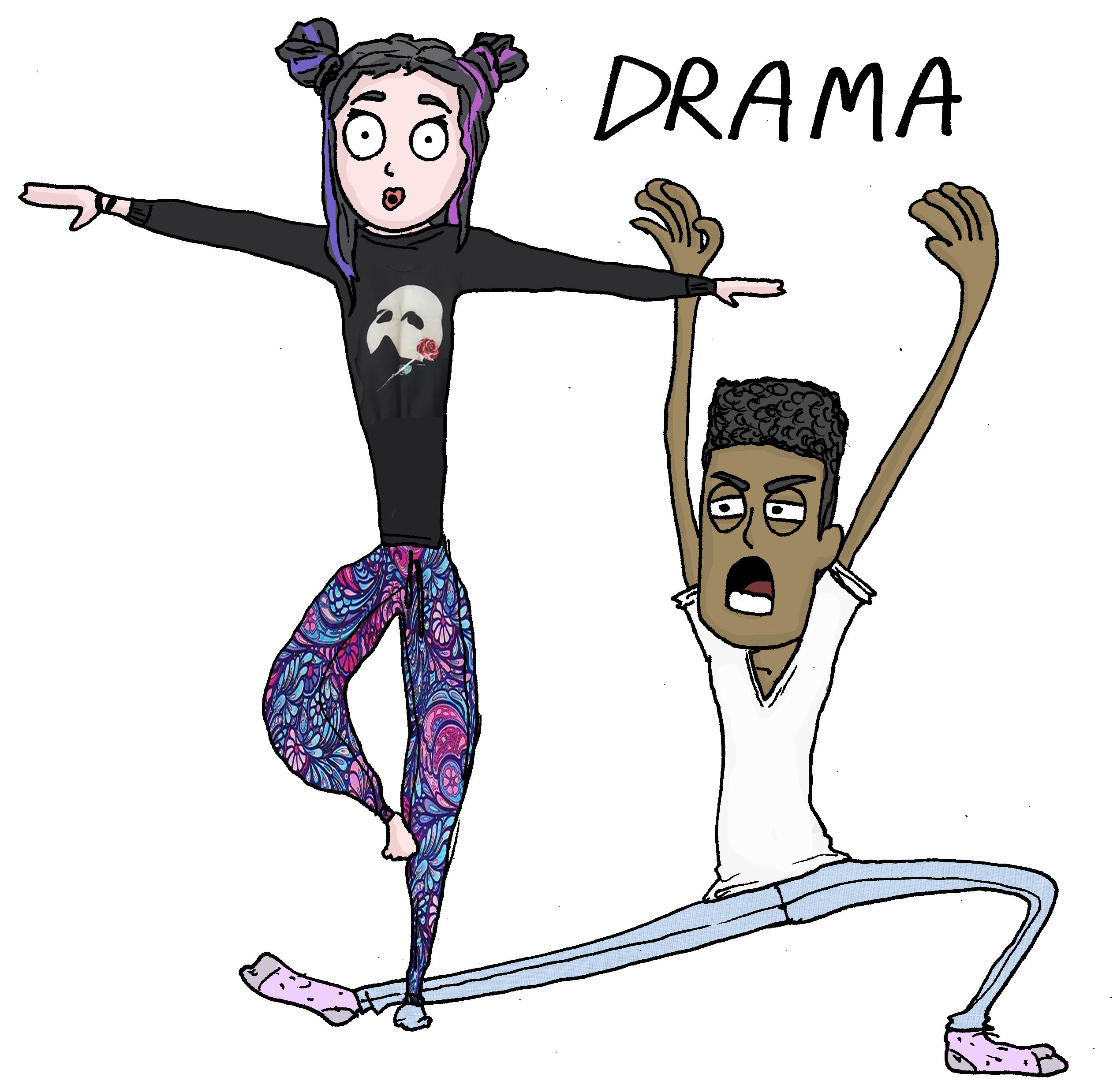 “Theatre guys wear basic V-neck T-shirts (like Primark Cedarwood State) and jeans that are a bit too loose on the legs but super tight on the bum. They’re just 100 per cent V-neck wearing types.” – Laura, Sheffield

Drama and Theatre students are constantly dressed for rehearsals, even when they’re taking seminars or going down the pub. After all, wearing proper clothes can stifle your creative flow. 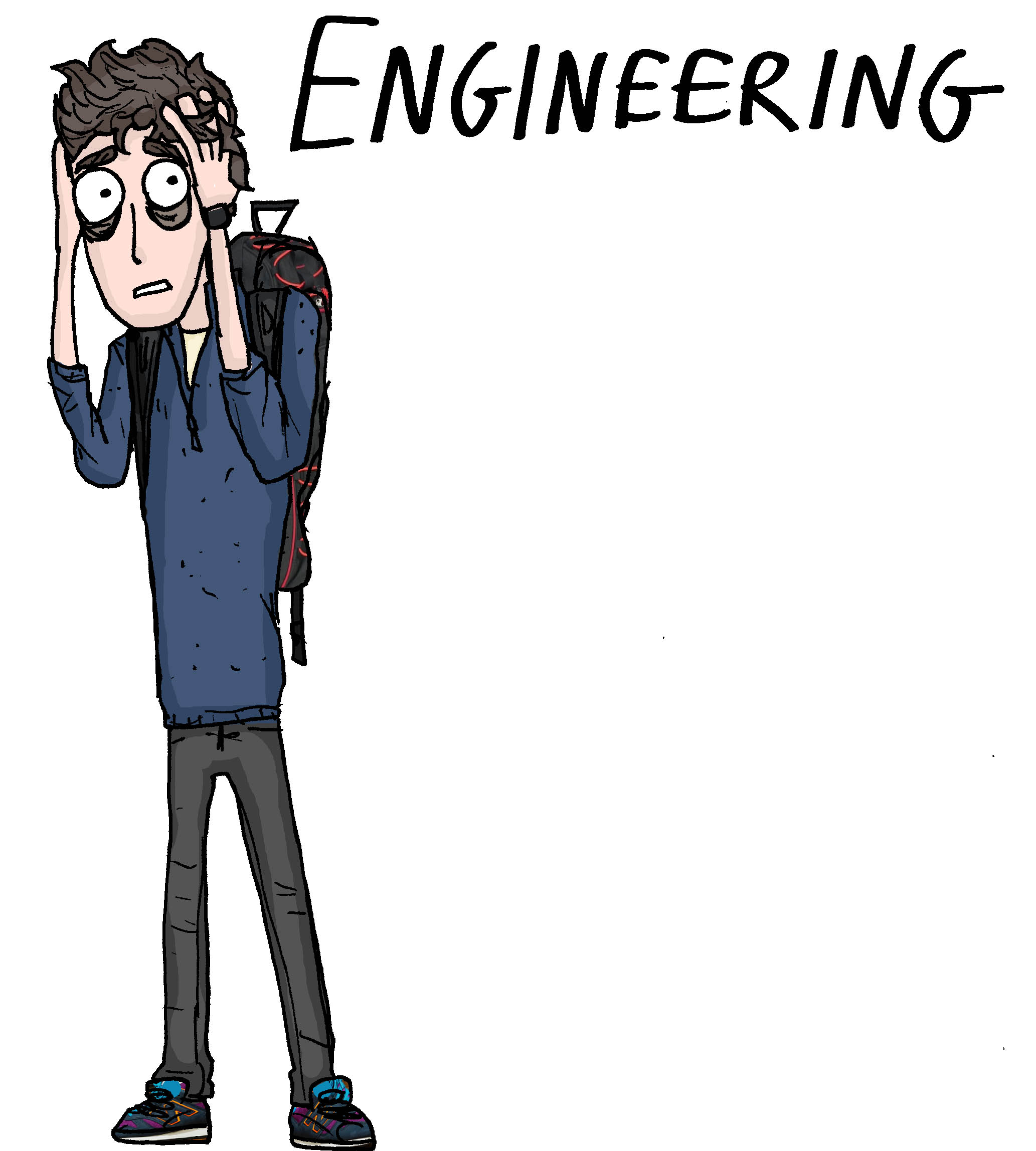 “Engineers wear bootcut jeans, fleeces and slightly discoloured T-shirts. They wouldn’t wear something if it didn’t have a practical purpose, and they certainly don’t have time for laundry – they’ve already made it quite clear how busy their schedules are. Usually sporting a wildly large Trespass rucksack, yet rarely seem to have a pen.” – Lorna, Sheffield 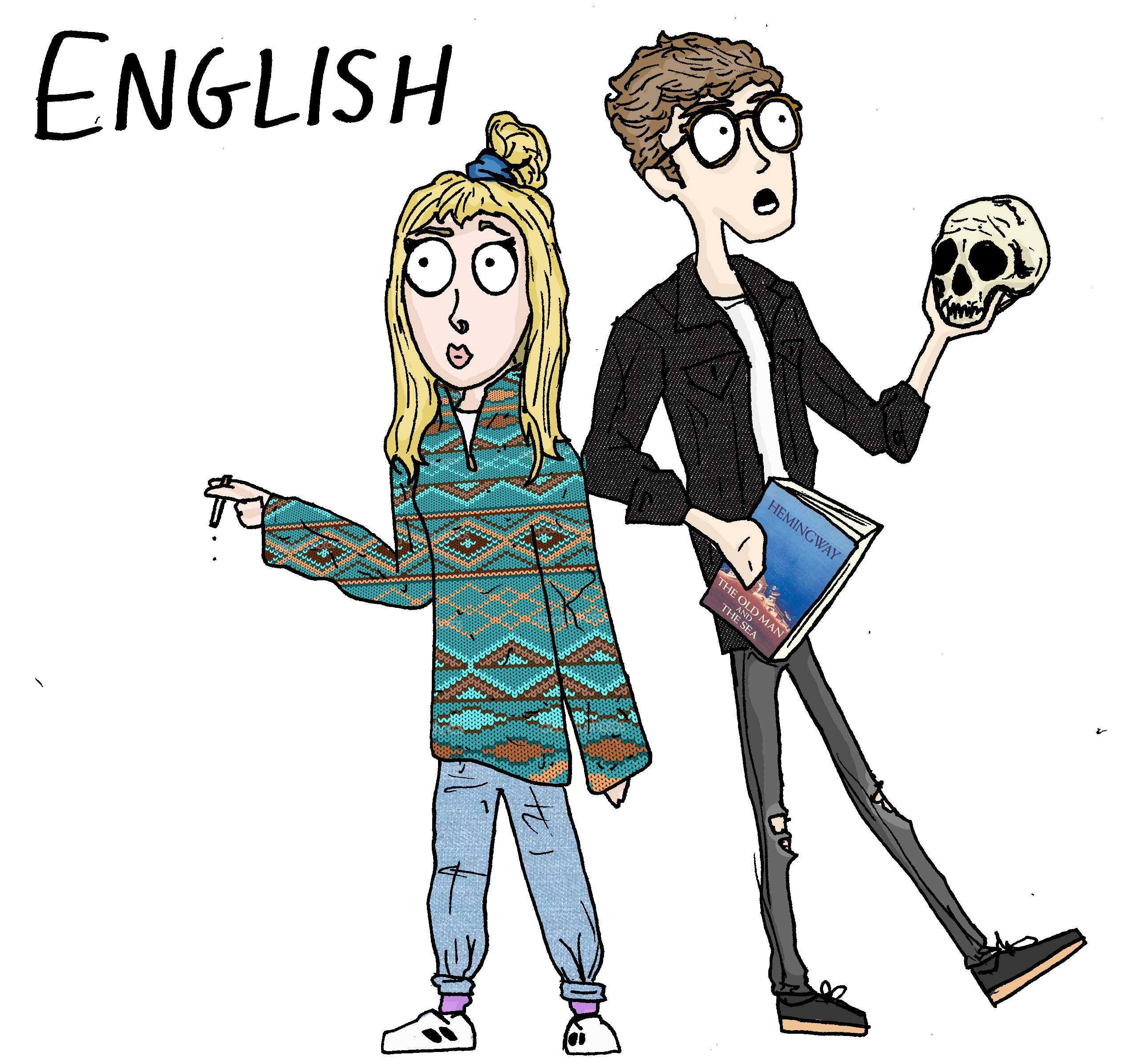 “The vibe is ‘wannabe indie but can’t quite escape preppy.’ The guys will have a well-annotated book in the pocket of their Levi’s jacket.” – Charley, Royal Holloway

Edgier than History and Geography but not as edgy as History of Art, English students are firmly in the “looks so different that they all look the same” bracket. Cool shirt tho, is that vintage? 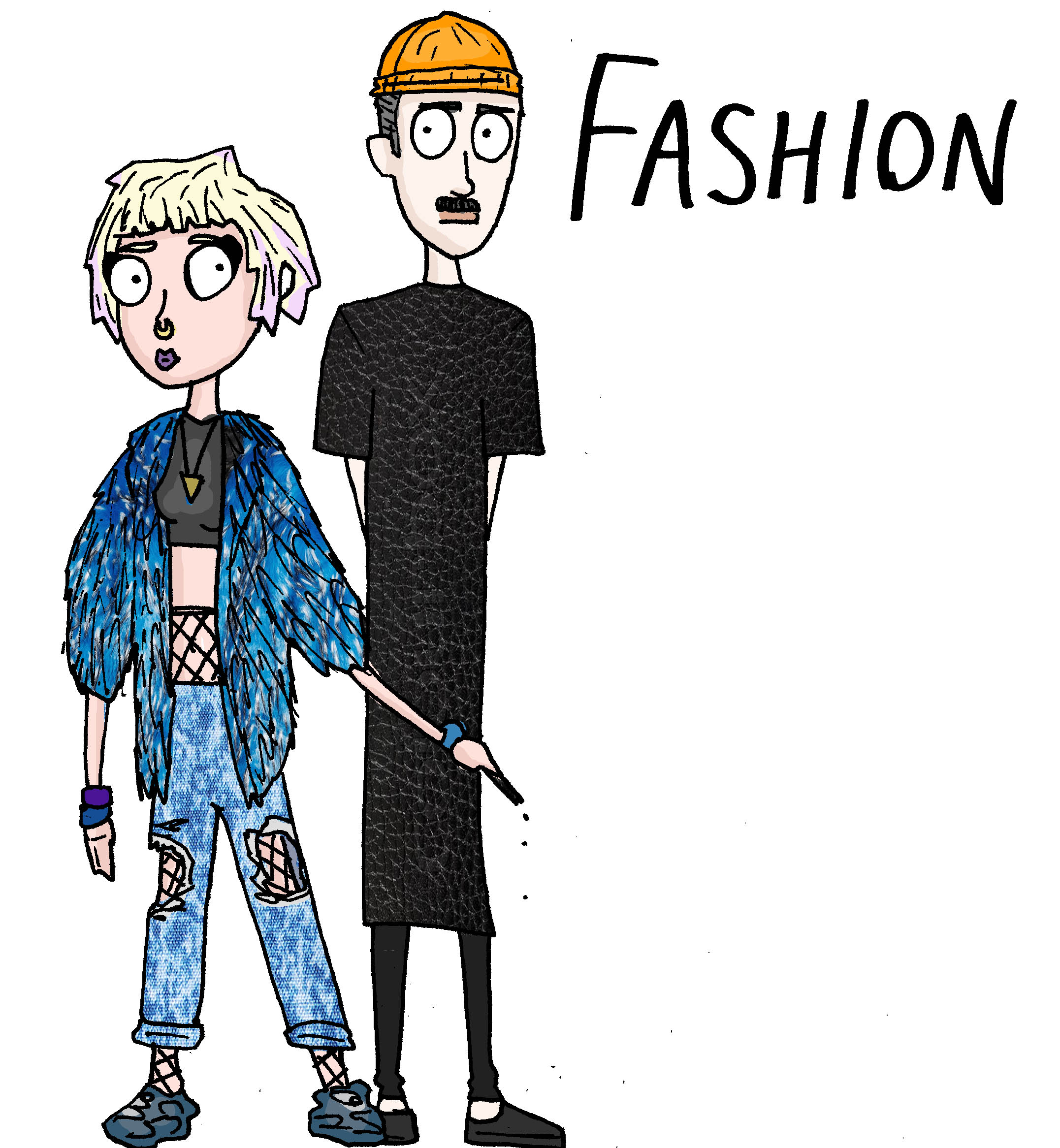 “They wear the shit you see on Instagram and think ‘nah it wouldn’t work in real life’ but they wear it in real life and it kind of does.” – Roisin, QUB

It’s fashion. Some people just don’t get it. 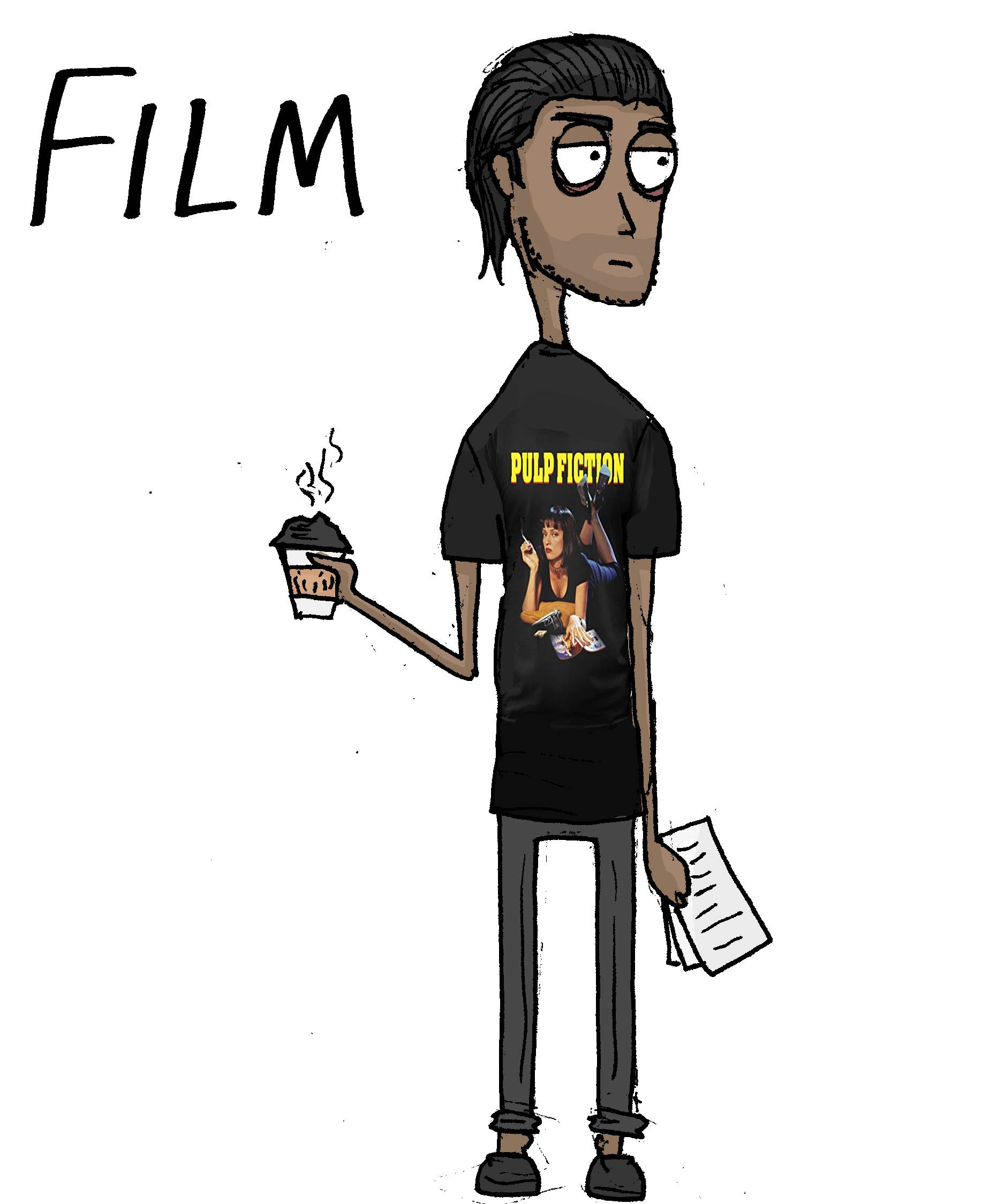 “Turtleneck jumpers, Scarface or Tarantino t-shirts (or if you really want to drive the point home, a Hitchcock shirt). Girls are more fashionable (A line skirts and nice boots) while guys keep it chilled and hipster in skinny jeans and jumpers. Everyone’s a messy artist but tries to keep it stylish, basically.” – Alexandra, Warwick

Red-eyed from lack of sleep due to staying up watching Battleship Potemkin and working on their screenplay, Film students carry an air of nonchalance which doesn’t match their screaming, manic desire to be the next Alejandro Iñárritu. 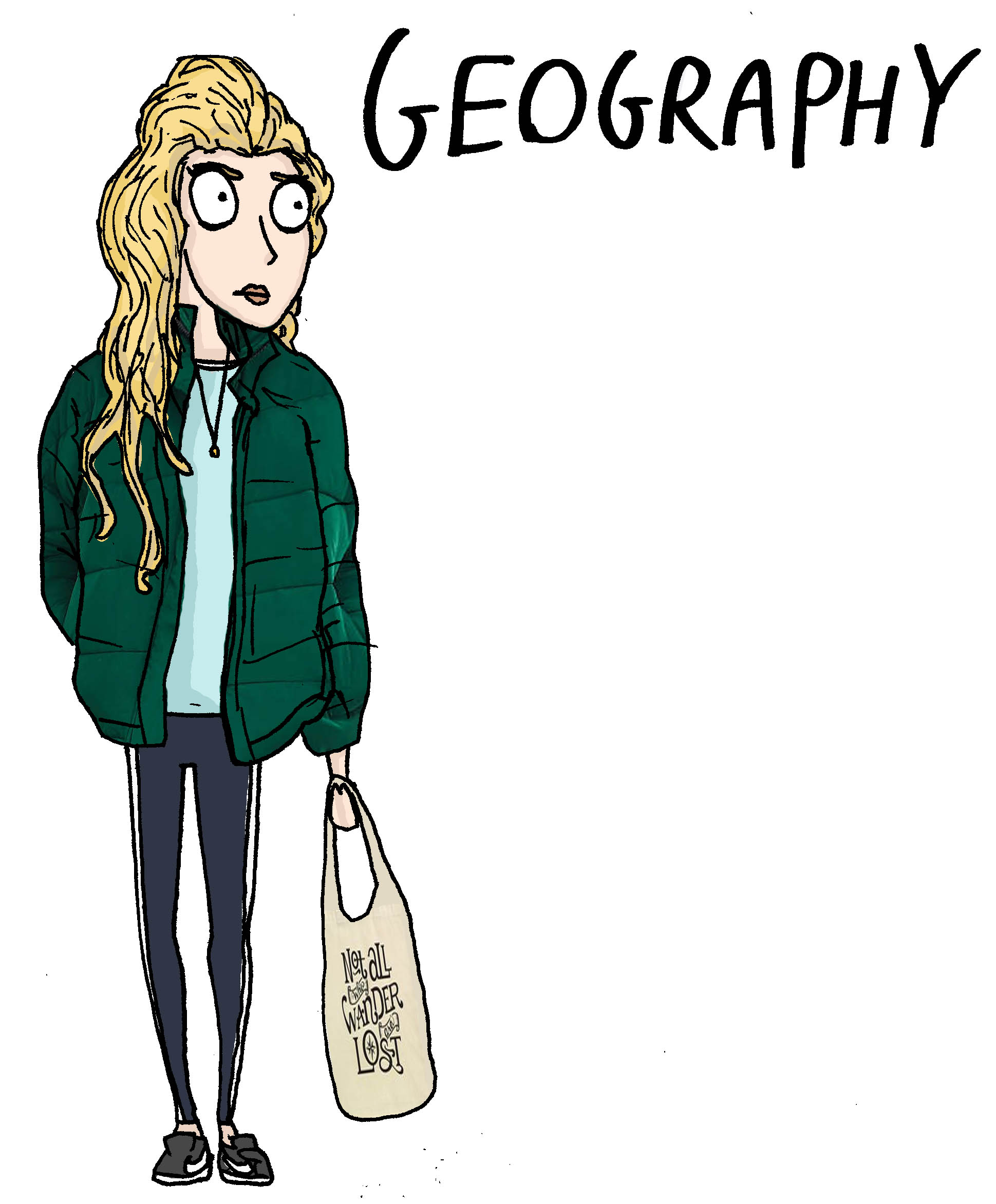 “Puffer jacket (that green puffer amirite),  athleisure leggings, very dirty trainers, hair half up in a massive scrunchy, and a T-shirt they probably slept in the night before.” – Bobbie, UEA

“Yeah, the excuse for Geography students not having showered is that they’re trying to save water because when they were in Malawi on a research trip last year it was just awful.” – Charley, Royal Holloway 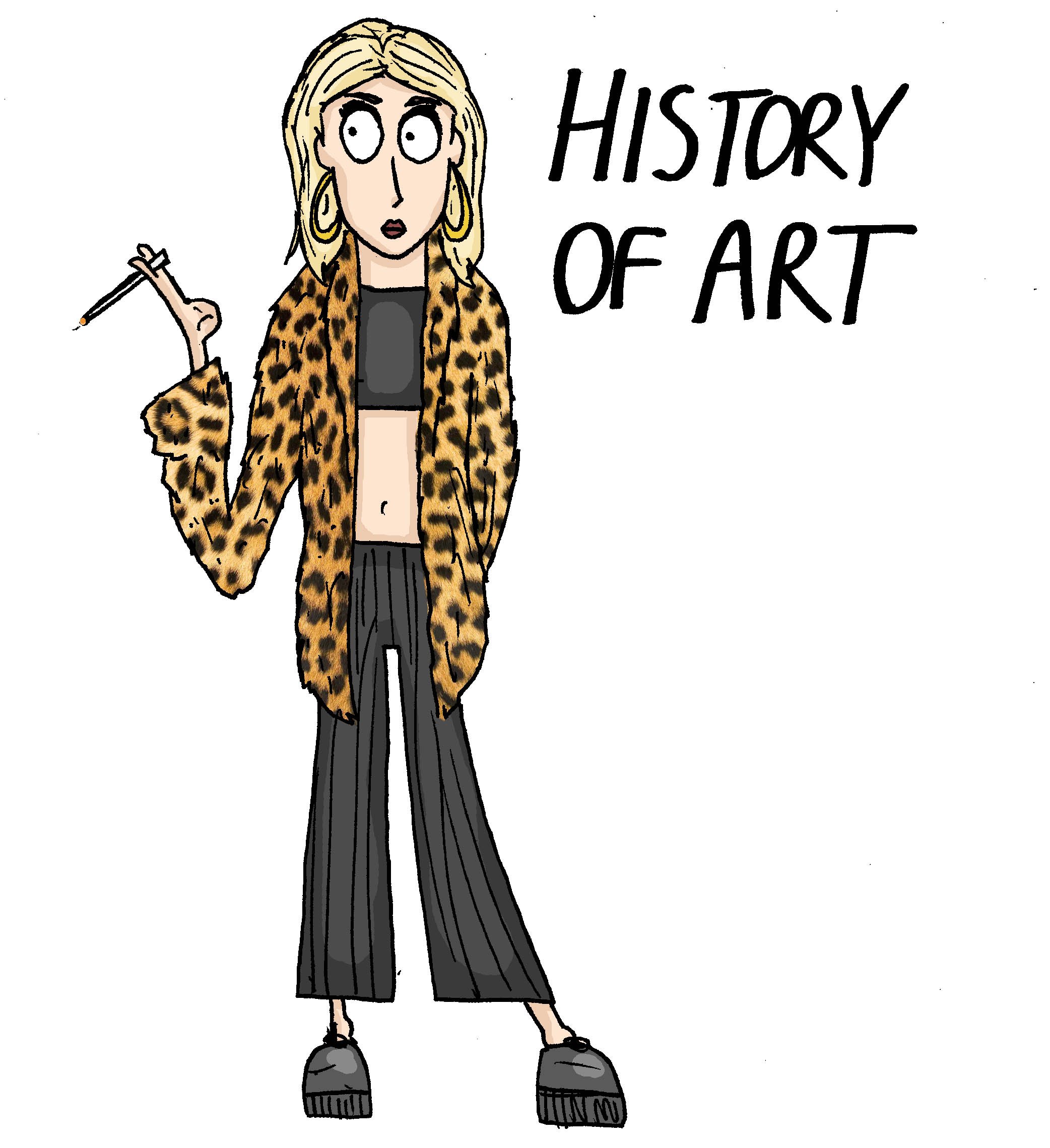 “Look at you, with your fur coat and your perfectly-out-of-place hair and your Vogue cigarette hanging out of your right hand. You’re aloof, and everyone knows it. Often seen sporting the clunkiest Doc Martens in the market, which build the foundations upon which your slight, caffeinated frame exists.” – Bella, Newcastle

“Some really obscene trends like bralets over sheer T-shirts, wide leg trousers, loads of hoops in their ears.” – Diyora, Warwick

If the cast of Mean Girls were at uni, they’d be studying History of Art: smoking Vogues, discussing the male gaze and telling lowly Cultural Studies students you can’t sit with us. 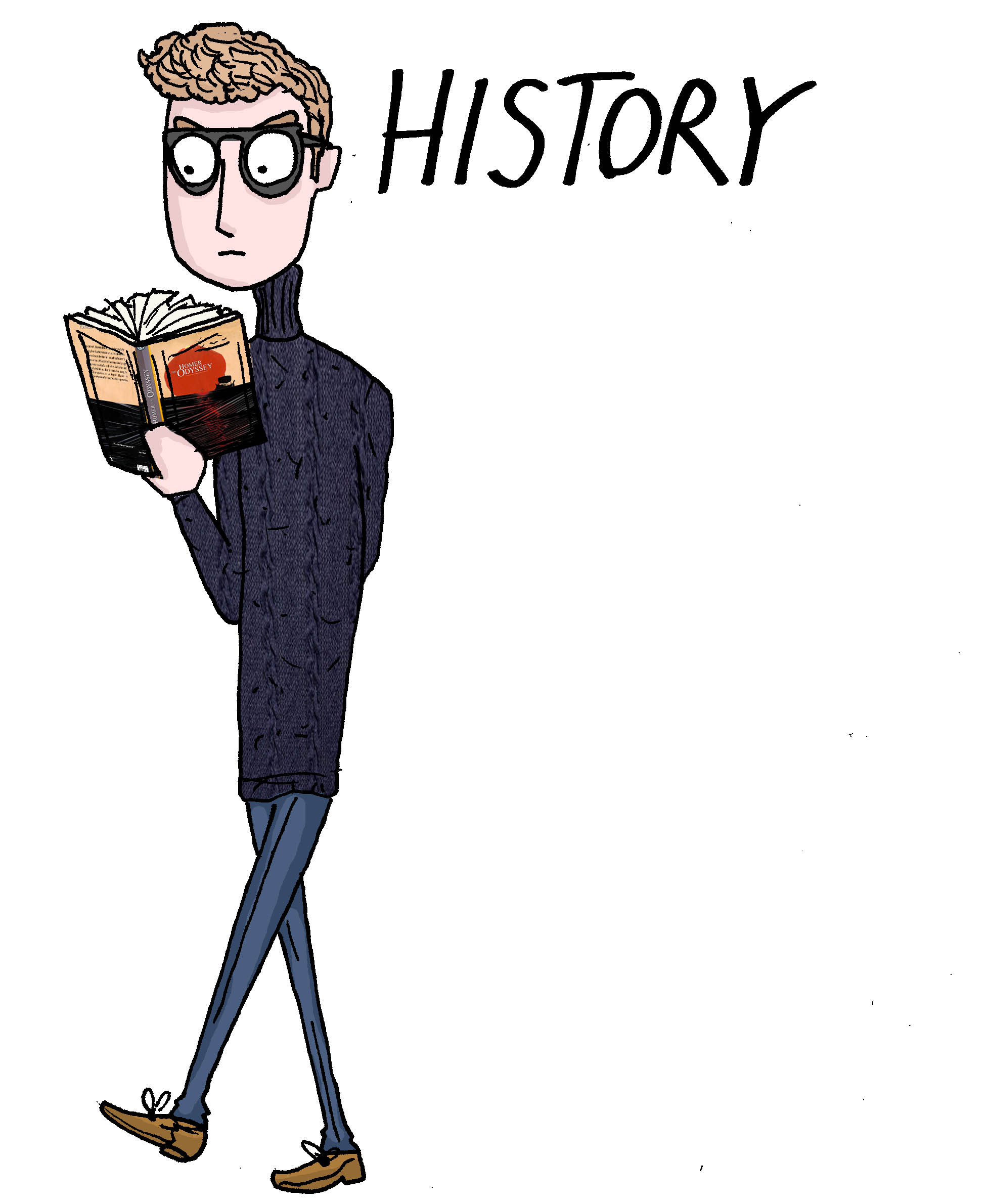 A bit like English students, but they care more about their studies than their wardrobes. Good for you? 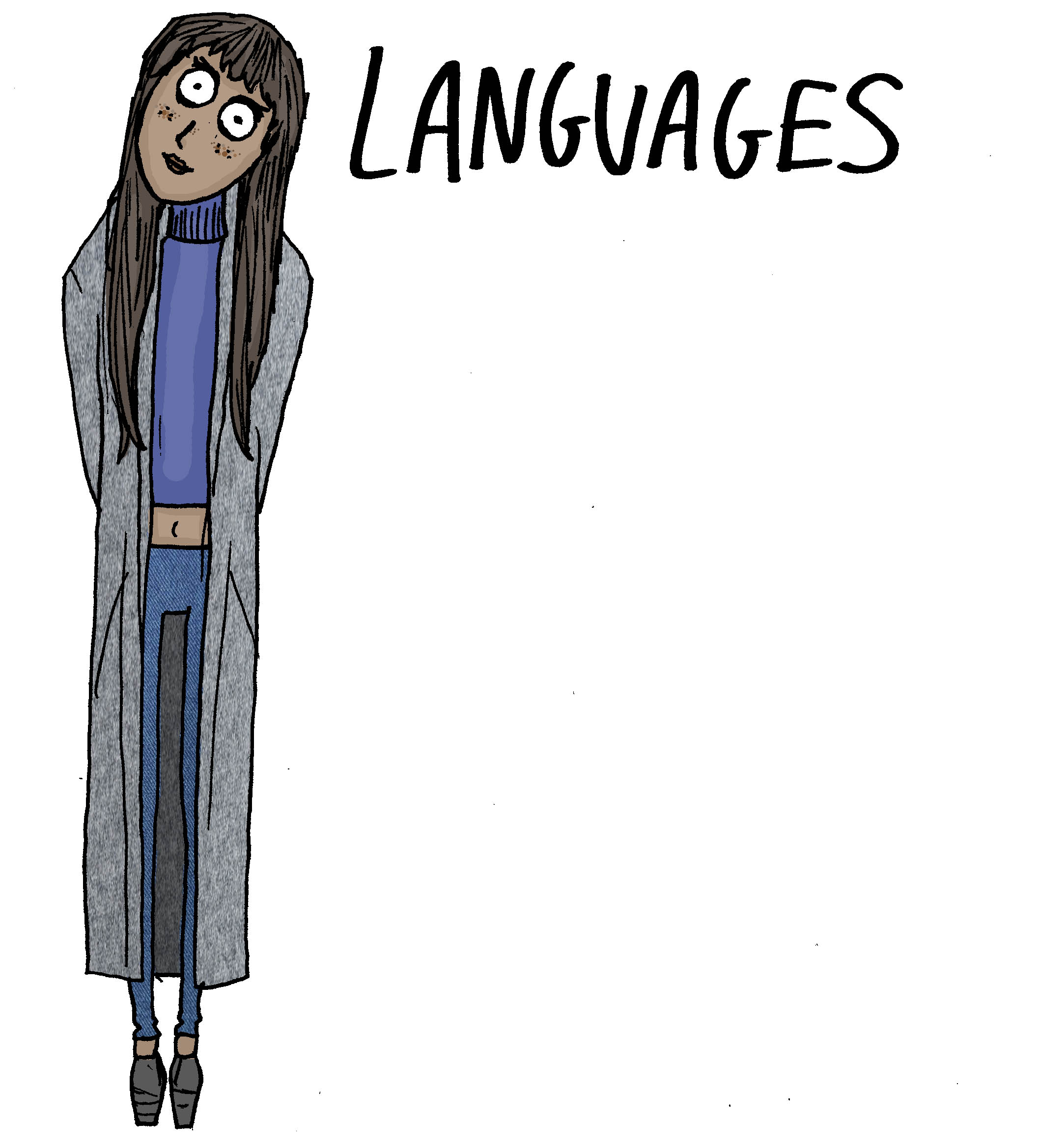 They think they’re Audrey Tautou and Audrey Hepburn rolled into one, but really they’ll be begging their dads to let them come home after their first semester abroad in Naples. 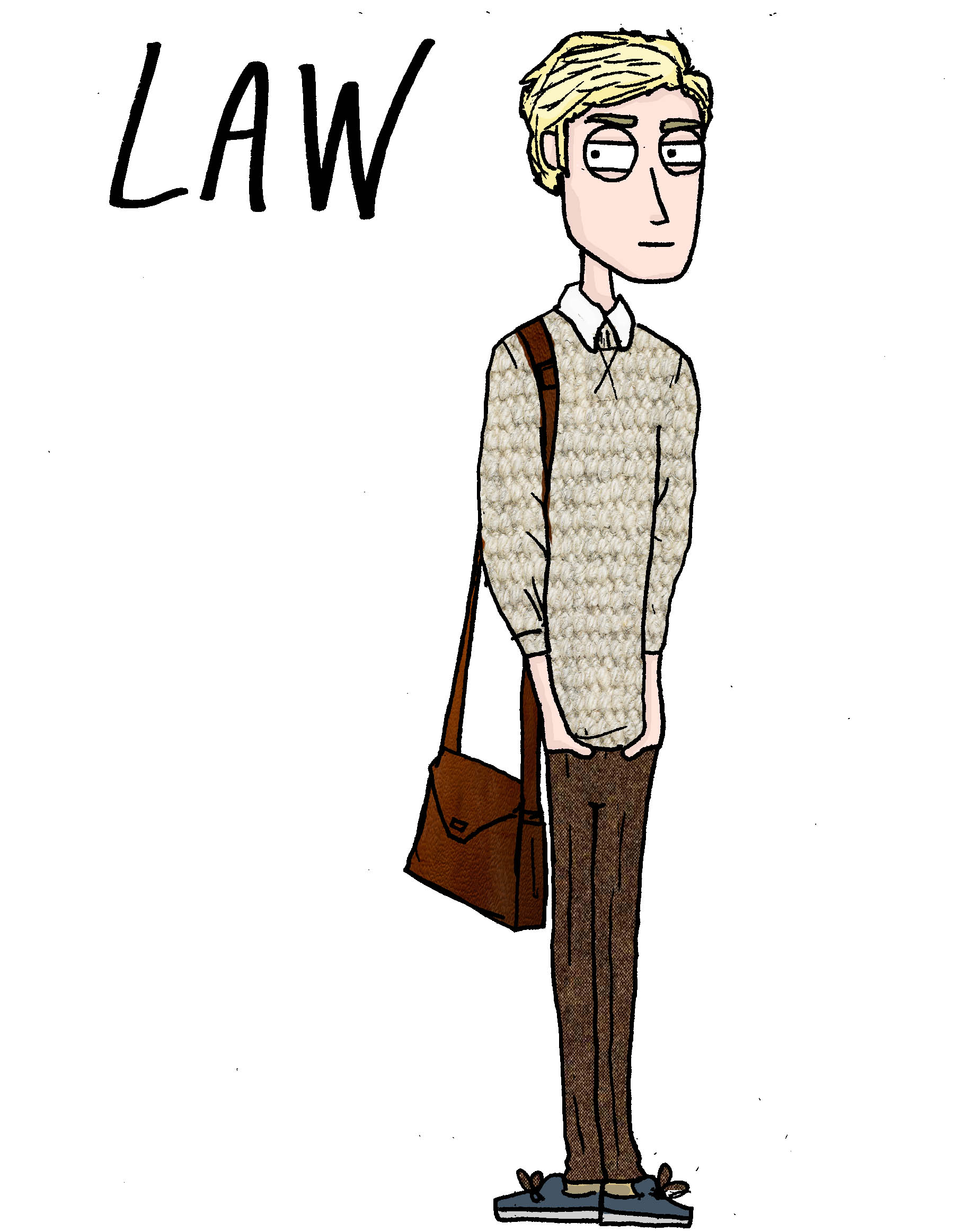 “Chinos and a sweatshirt – they try to be normal but jeans are just too mainstream to bear.” – Charley, Royal Holloway

Dressed for the courtroom, just five or so years too early. 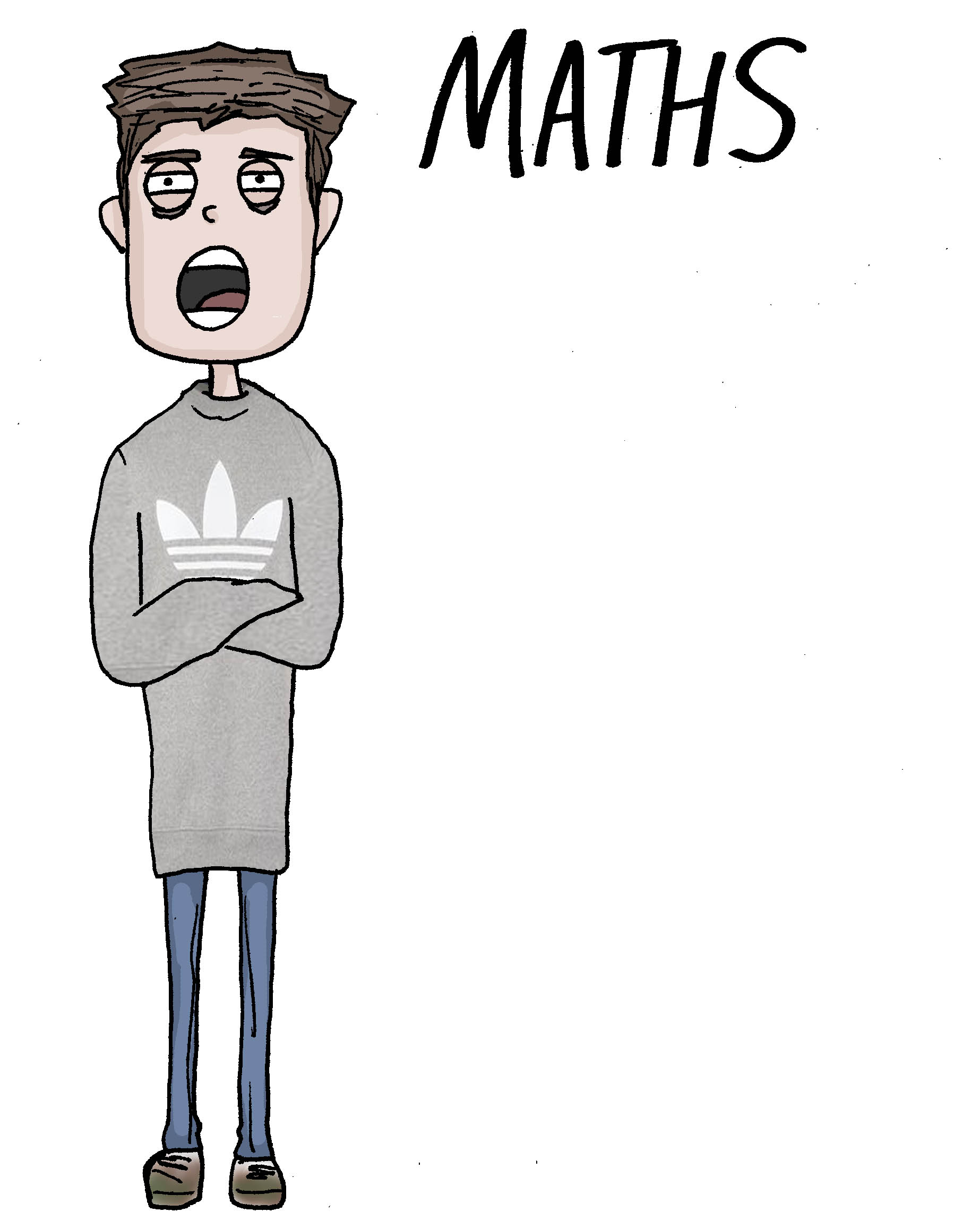 “You’re always surprised when you meet someone who does Maths, because they’re kind of normal. Just clever.” – Bella, Newcastle

Not nearly as nerdy as you’d think. Sure, Maths is for boffins, but that doesn’t mean they have to wear specs and tucked-in-shirts and pocket protectors. 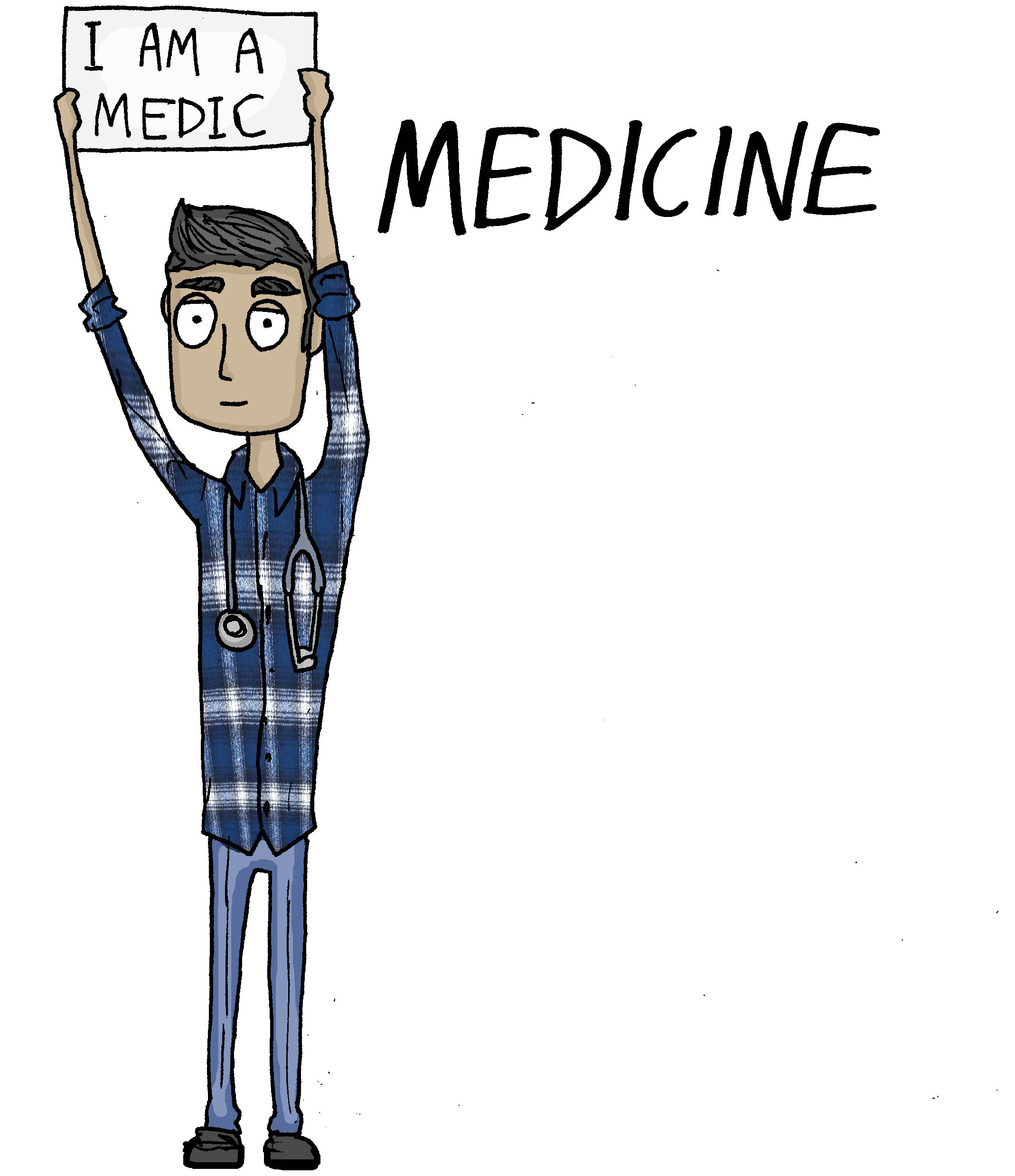 “Anything from Topman 2013 because they’re too busy studying for their degree to go shopping for anything new.” – Lucy, Cardiff

“Anything their mum got them from M&S.” – Verity, Leicester 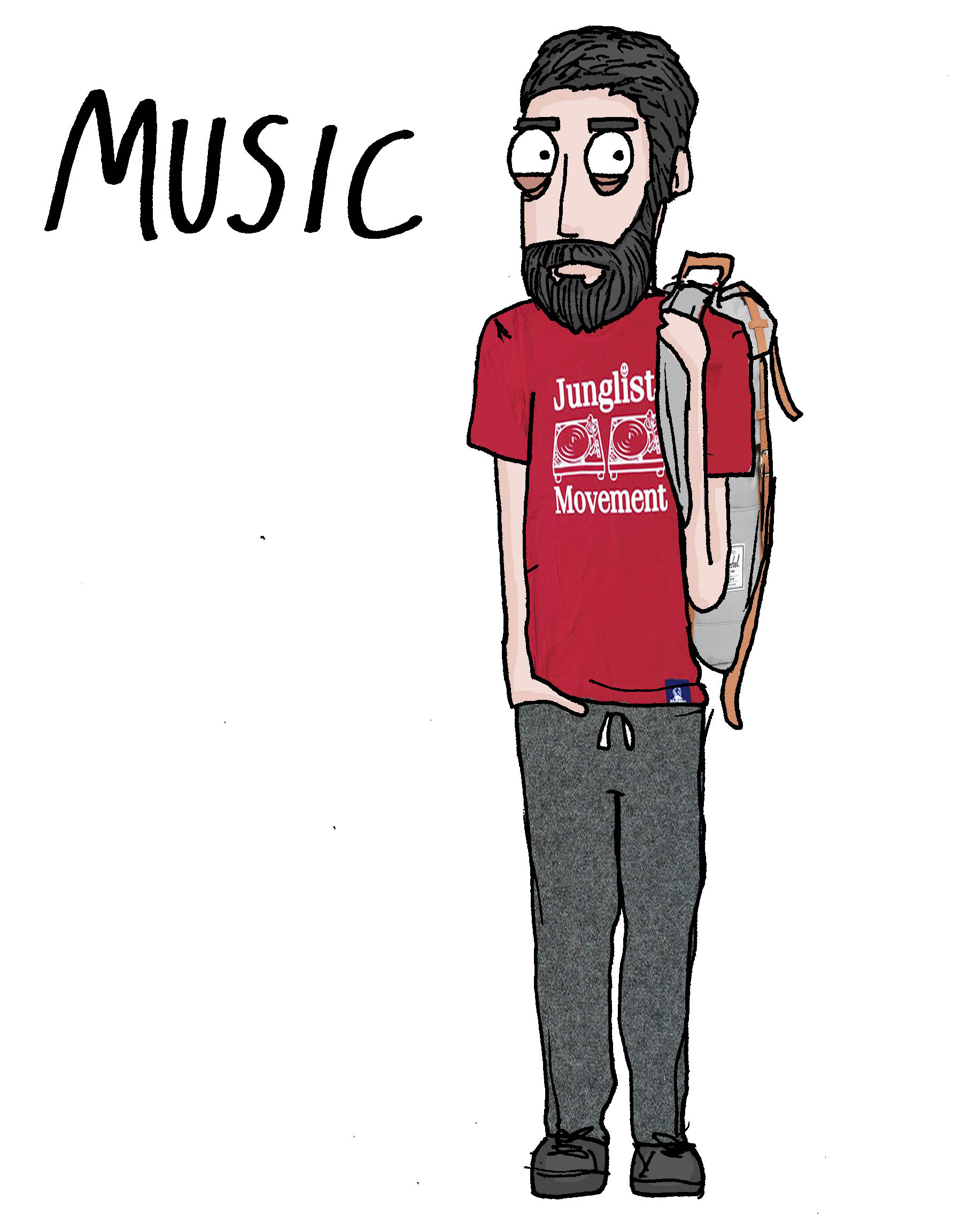 Whether it’s playing an instrument or lounging about in Music Tech, their outfit will scream that they’re only doing it until their sideline as a DJ really takes off. 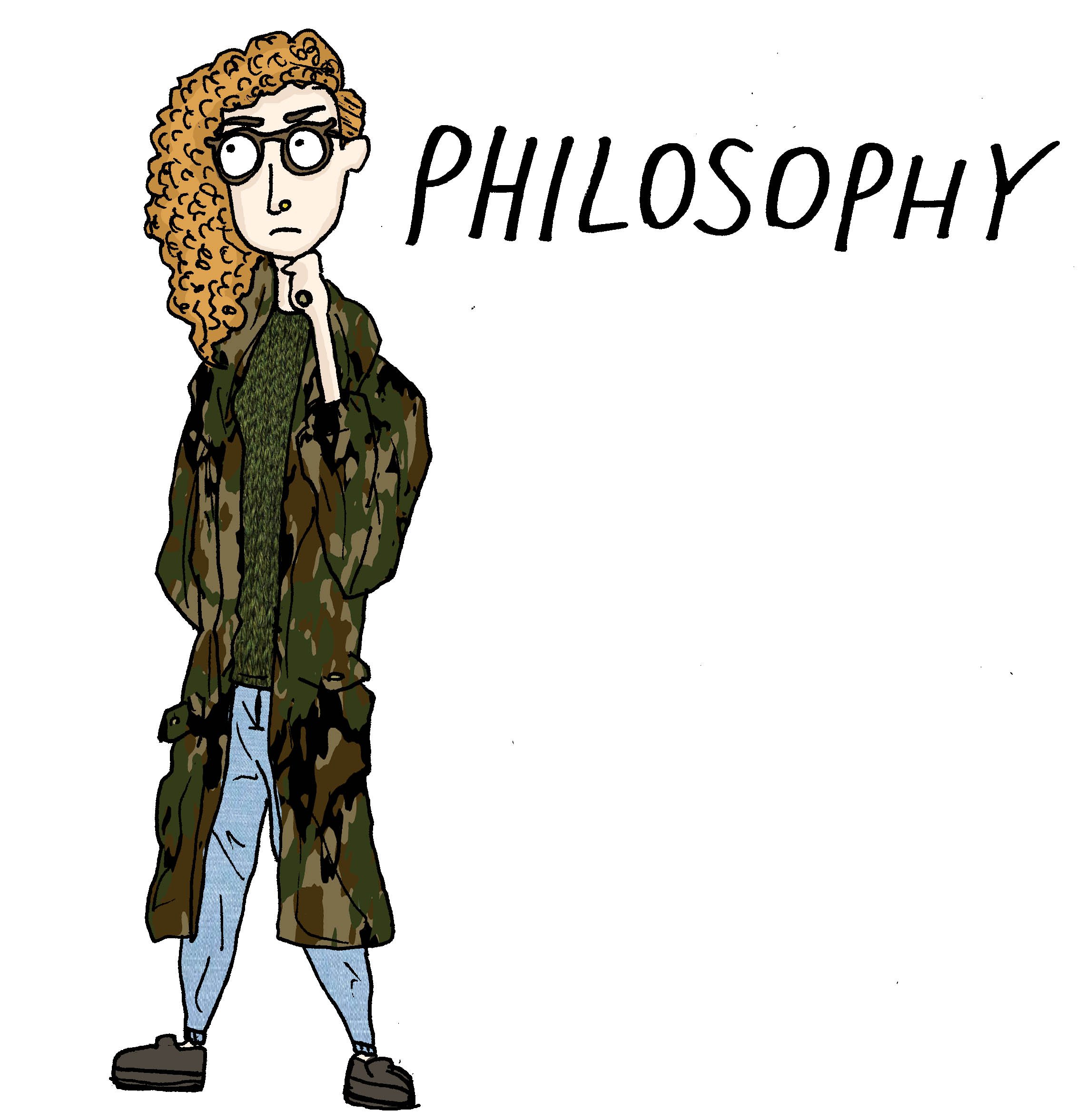 They’ll look like they don’t wash. But in such a dirty world, can anyone truly ever be clean? 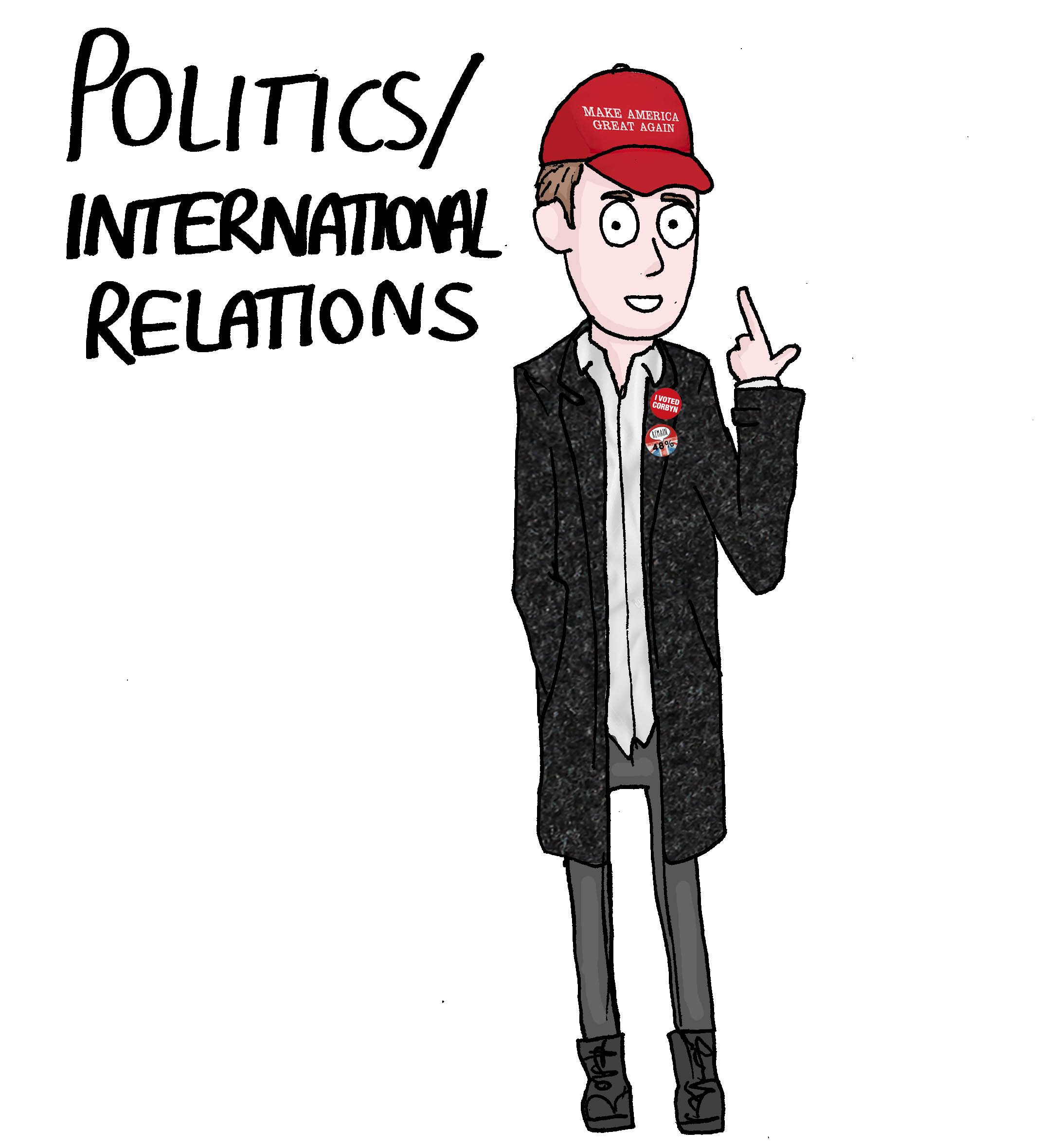 “Big long black jacket, boots, smart shirt. You also own some obscure international organisation shirt, hat, sticker, socks, jacket etc and will wear it to the lectures a few times to start up conversations with the lecturer.” – Kyle, Sussex

“Slicked back hair, wearing some kind of blazer with the lapels covered in badges about CND, Labour, gay marriage and trees. A colour of jumper that doesn’t match the blazer with skinny jeans and smart dress shoes.” – Lee, Stirling

They’ll tell you they’re suave and debonair, like Trudeau and Obama. Really they’ll be dead-eyed and awkward, like Cameron and Corbyn. 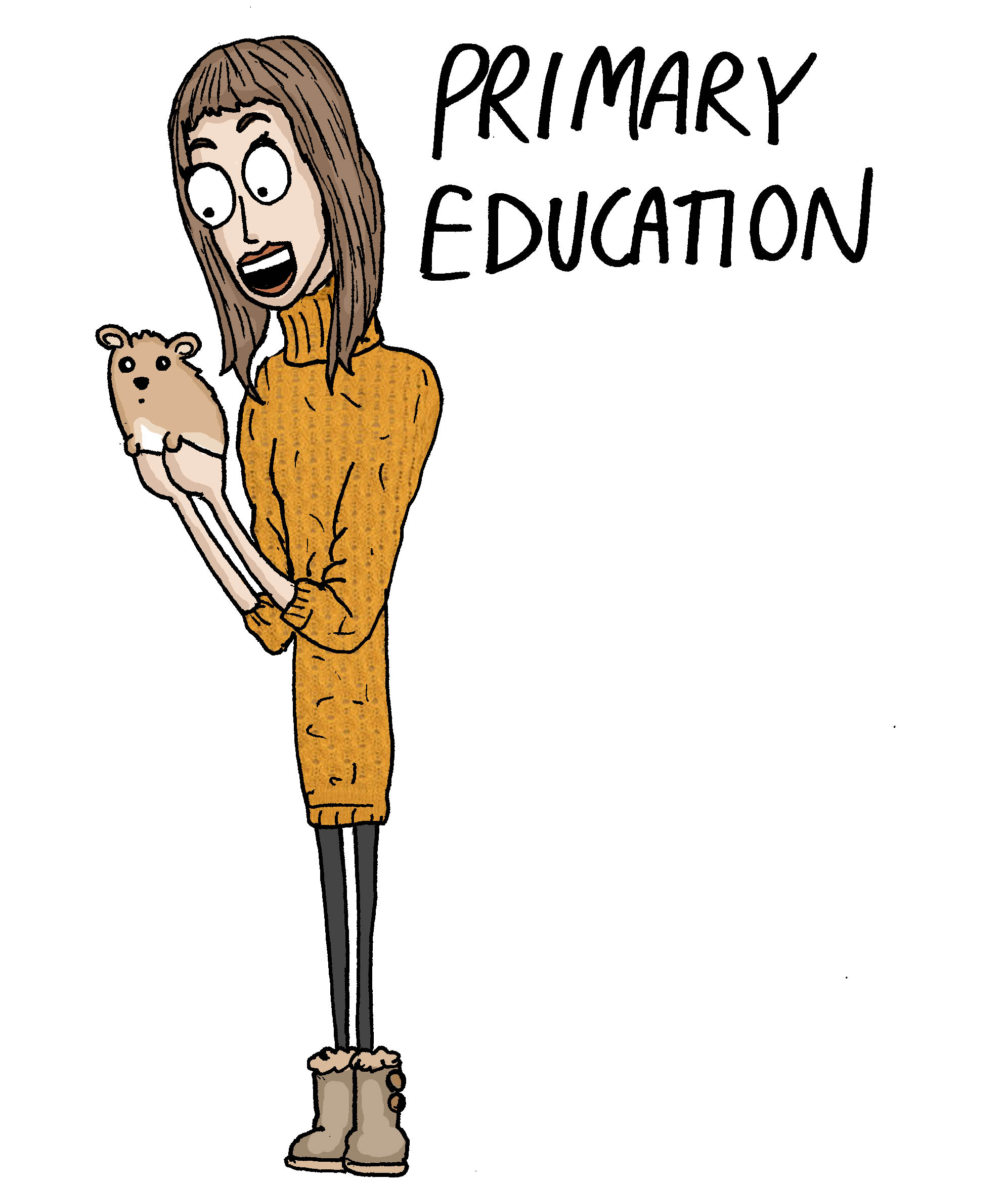 “Mumsy types with big thick woolly jumpers and paint on their hands. Leggings all the time, probably playing with a Guinea Pig.” – Oli, Cardiff

They’re invariably happy, because they’re doing what they truly enjoy. Who cares if the class hamster chews through their jumper, or if they get paint all over their favourite mom jeans. Teaching is love! 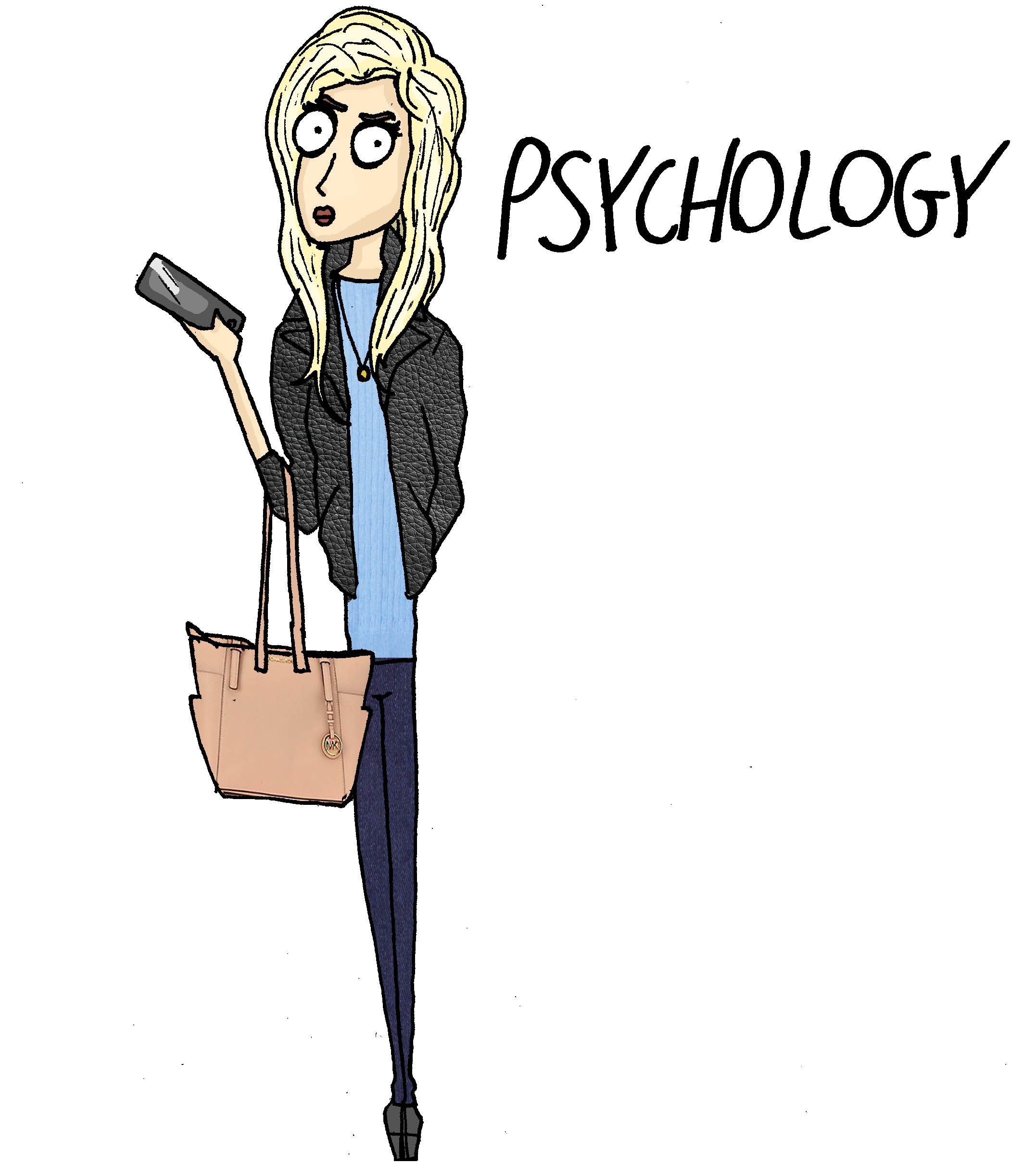 It is a lot, but Psychology is a cut-throat business – especially when every single person on your course is a style-minded girl with a lot of student loan to spare. 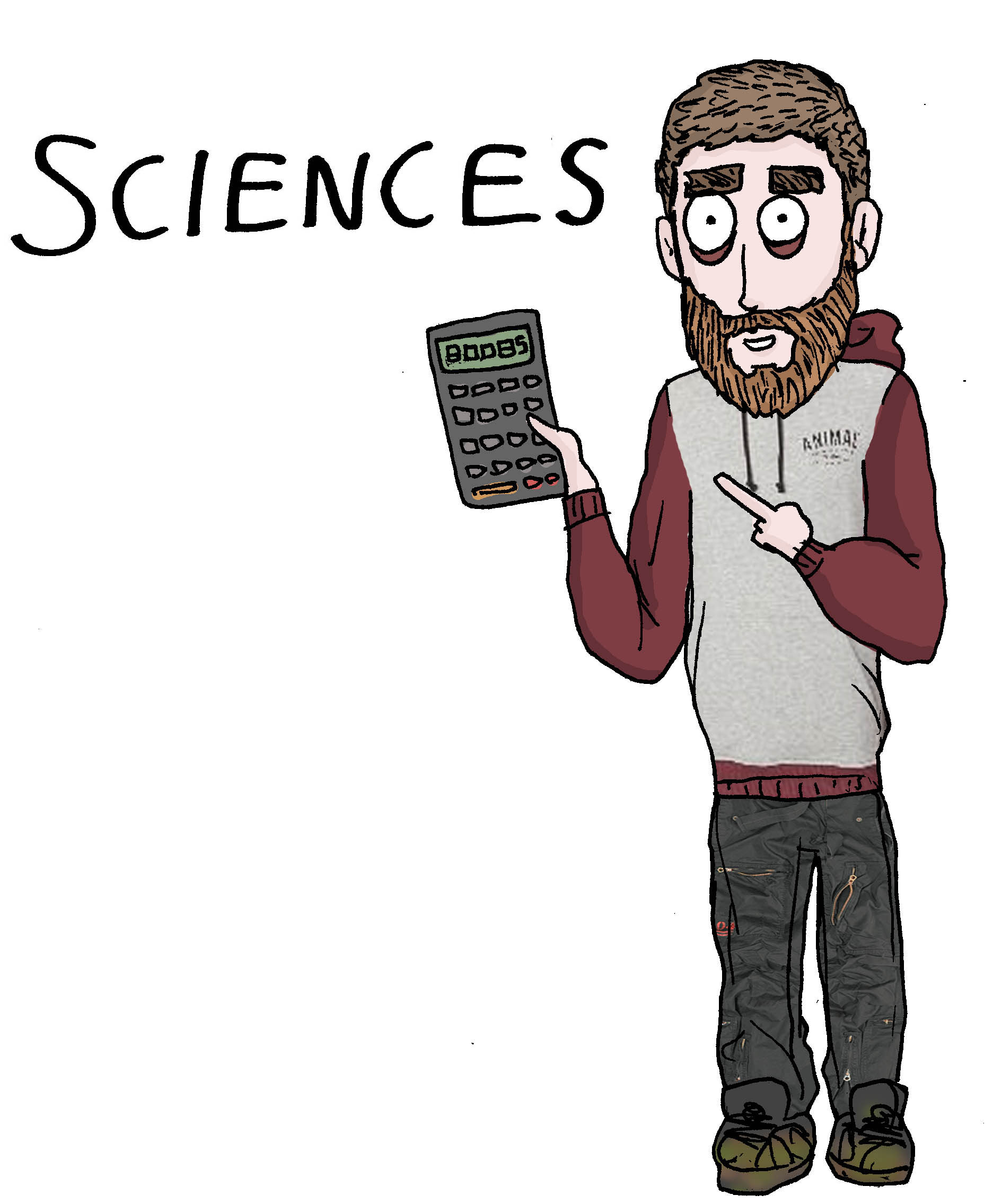 “Chemistry, Physics and Biology are all quite similar. They’ll be wearing a T-shirt with a motif that was on sale in Topman three years ago, with blue jeans – probably bootcut.” – Oli, Cardiff

“Biology try to have an aura of Medicine, but they don’t quite nail it.” – Grace, Manchester

It’s a broad spectrum, but there’s a reason the sciences are grouped together.

Sure, Computer Science may be beardier; Physics may be more inclined to practical outdoorsy wear. Biology may be the somewhat more edgy, more normal one of the bunch, rocking some New Balance like it’s no big deal. 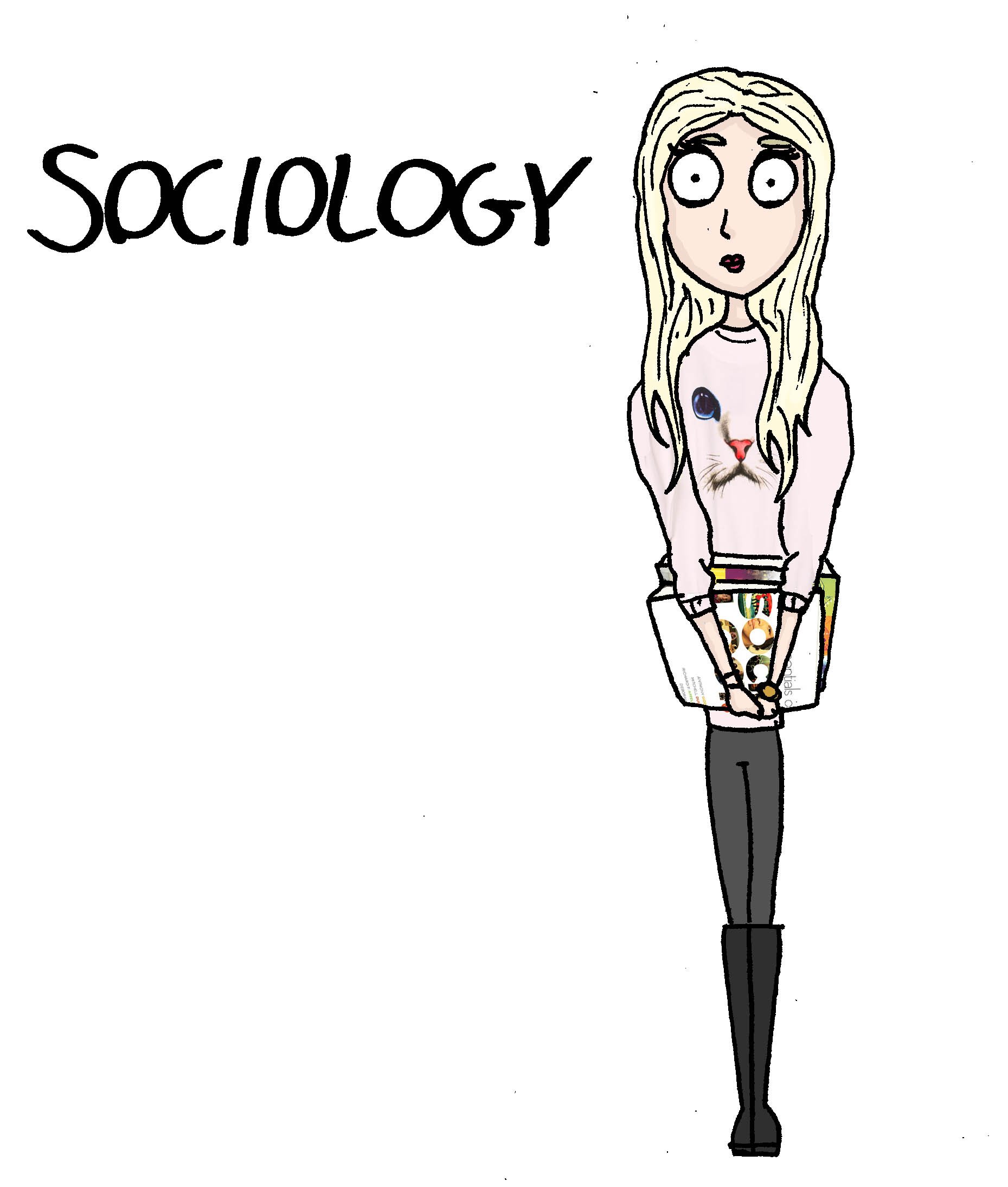 “Blonde, girly, a tiny bit edgy but quite basic. Maybe she dyed her hair a bit pink to piss off her dad, but she’s going to dye it back because she loves him really.” – Bella, Newcastle