The curious case of the two Chris Eubanks

“I am balls,” Chris Eubank Senior loudly exclaims. He rises off a bar stool, stands wide and looks around the room like an actor receiving his first ovation at the Globe. If the bar was slightly fuller he might have got one.

We’re in China Tang, an art deco snug tucked into the back of the Dorchester hotel. The Park Lane institution has been Eubank’s base camp for fight weeks since 1993, when a change of management inspired a move from the Grosvenor. It’s now home to the IBO super-middleweight world champion, Chris Eubank Junior.

Last week he fought for that belt in London’s Olympia. The venue used to play host to circus acts, the performers this time around, though, were Chris Eubank Jr. and Renold Quinlan at the top of a fight card designed to launch ITV’s new pay-per-view service. Eubank won with a 10th round stoppage, taking the IBO title – one most casual boxing fans will not have heard of. A quartet of championships hold the well-regarded titles in world boxing. They are the WBA, WBO, WBC and IBF. You’ll notice the IBO is not in that quartet, but the Eubanks intend to make it so. 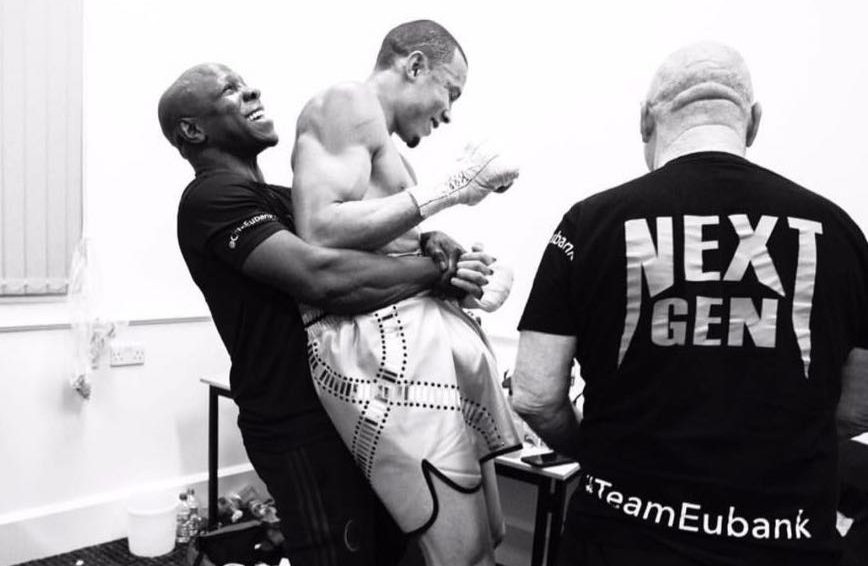 I wait to meet them in the Dorchester’s lobby. Tré Cool walks out into the cold air. The Green Day drummer starts the London leg of tour tomorrow. Five minutes later, Senior appears, looking fairly trademark. A mandarin suit paired to teflon jeans and boots with a toe so long and curved they look positively elven.

He leads me toward China Tang through tables of colleagues, champagne drinkers and old crones taking high tea. We wind across the room in an “s” shape, I’m guided by a stern hand in the small of my back. As we turn along the curves of our route he alternates his grip to my outside elbow, looking deliberately toward the tables we bypass. Eventually someone calls out “Mr Eubank!” Chris smiles and flirts with his admirer’s wife. They pose for an Instagram, I step out of shot and next to a woman in a ball gown kissing the ivory of a grand piano with her fingers. It’s probably Tchaikovsky, or something.

“Junior will be down shortly,” Senior assures me. We resort to small talk and a drink. He details his Twitter strategy of replying with Tony Montana quotes to detractors (“I don’t use bad language, only in quotes”) and the mental toughness needed to fight Steve Collins in Ireland: “I am balls.” The suggestion that his behaviour might constitute eccentricity is swiftly rebuked. “I know what I’m doing is cool, it’s not eccentric, it’s just ahead of where everyone else is.” He uses his shoes as a case study.

After half an hour of worrying whether I’ll have to pay for Senior’s orange juice and lemonade (sweet and sour pork costs £17 if you don’t fancy the suckling pig), his son emerges. Sporting his belt over one shoulder, his walk a little stiff, you wonder if he’s let the newly won trophy out of his sight. He hasn’t. It’s accompanied him on shopping trips to Harrods and Selfridges, and to the gym.

He shakes my hand with a firm grip and index finger outstretched. His most significant injury is a patch of raw skin the size of a two pound coin between his first and second knuckles, “other than a few bruises,” and he likens punching Quinlan to hitting concrete. “Once I was in there I understood this man was not going to lie down, I may very well have to knock him out, or the referee stop him, because he is here to win. He earned my respect that night.”

Eubank admits to only having seen Quinlan fight twice before, which speaks to his lack of pedigree. The Australian had not fought outside of his continent before their bout. Regardless he’s now held by Junior in higher esteem, even if it’s just by virtue of being a boxer:

“This isn’t a game. You play football, you can lose and go ‘we’ll get them next time.’ If you lose in boxing you lose your health. You lose your teeth. Being a fighter, being the guy that goes in there in front of millions of people on TV, thousands of people in an arena, fighting a man one on one. That’s the ultimate. There’s no truer way to earn a living. You can’t cheat, you can’t cut corners. The fighter, the man that’s willing to do what most men couldn’t even dream of doing. Even if there was nobody watching, they couldn’t dream of fighting someone.” 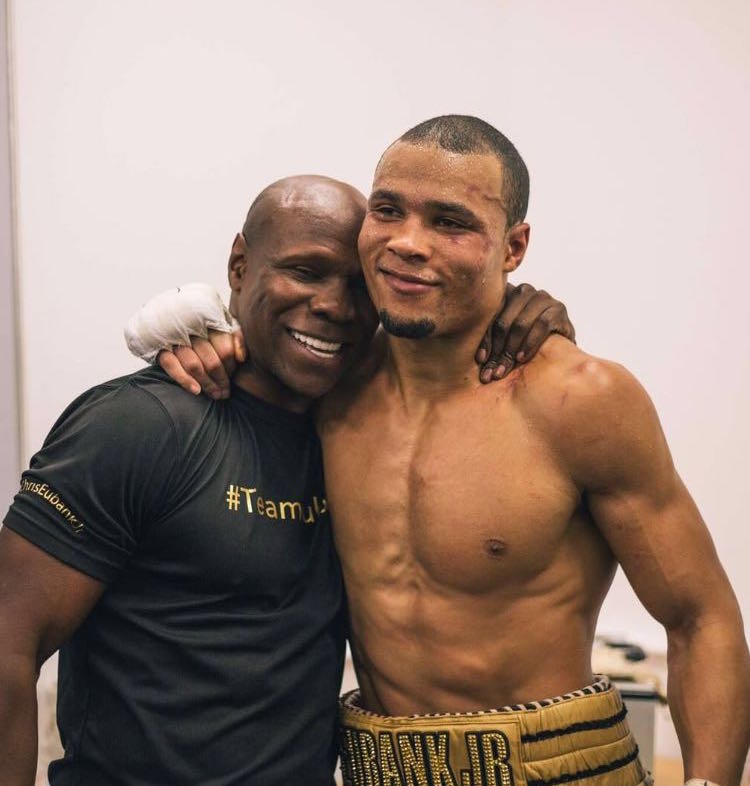 Fiercer challenges await Eubank now, if they’ll fight him. Most potential opponents holding belts in the other organisations have mandatory challengers to face, including James “Chunky” DeGale, though that hasn’t stopped Eubank calling him out.

The men agree it’s the money fight for both of them, but DeGale recently used a Mirror column to deride Eubank and his belt as “laughable.” Probably a rise to Eubank’s own bounty of amusing quips about him: “He’s actually similar to me in the fact that a lot of people don’t like him. But I just think, I have a lot of fans and a lot of haters. He has a lot of haters, and a few fans.”

I go to ask another question but dad interjects. He seems quite rehearsed in waiting for Junior to finish speaking before making a point. “You see? He speaks like a champion. Champion’s talk, which is why he’s got the championship. You should make reference to that – speaking in a particular way which he has no place to be doing.” 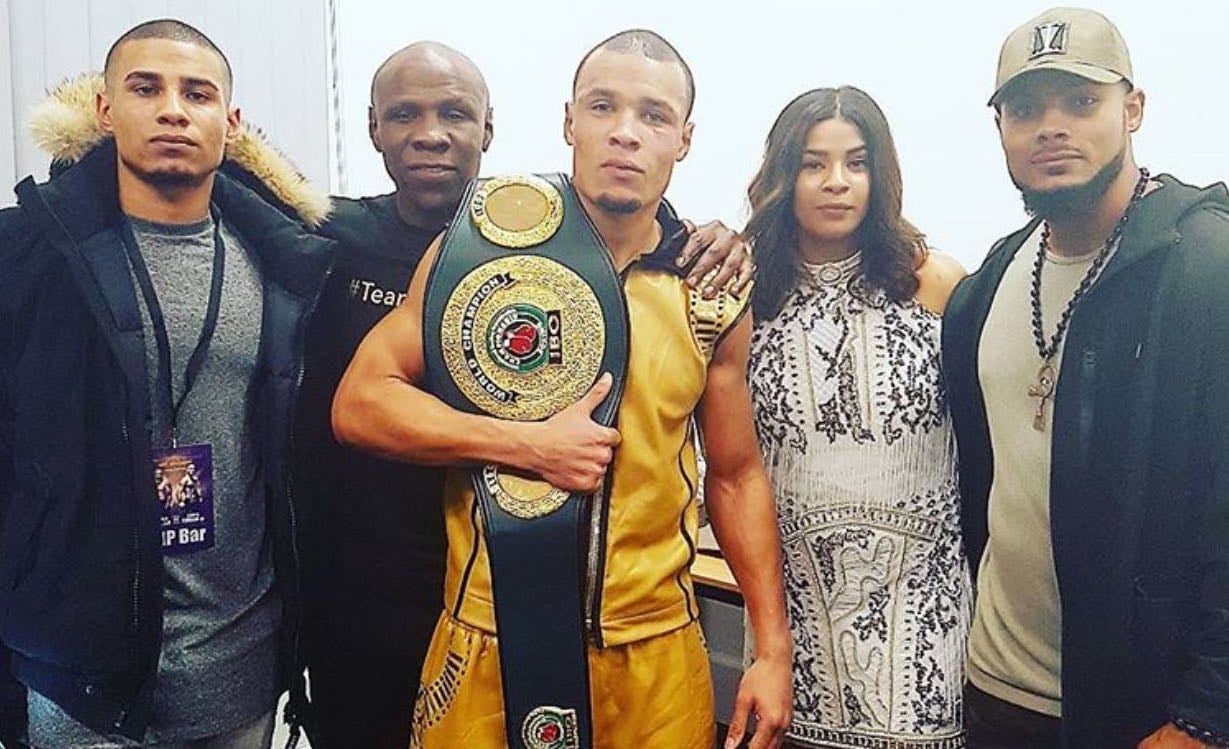 Junior shows me a picture of him and Drake backstage at the O2, belt expectedly slung between them. “Or this one might be better,” he’s standing next to Paul Pogba, the world’s most expensive footballer for the time being, but Senior isn’t interested. “What Conor McGregor is to UFC, Chris Eubank Jr. is to boxing. We are the new money. We are the new money. Strike that. Chris Eubank Jr. is the new money. He is the new paper.” He pauses. “I think the song goes: ‘How do you like me now? How do you like me now?'”

The rendition of The Heavy rings pretty true, the comparison to the UFC’s two division world champion doesn’t. Simply put, Eubank hasn’t made it there yet. His dad repeats: “Belts don’t make champions, it’s the champions who make the belts.”

It’s a mantra with more honesty, and Junior could yet make something of his IBO waist-piece. Indeed if he keeps fighting the way he’s talking, he probably will. He finishes: “We, me, I’ve got a lot more that I need to do.”