Oh, and it also doubles as a conditioner

It’s 10pm at predrinks and your tickets run out at 10.30pm. You haven’t showered and need to carry on building your buzz, so you hop in with a Carling. After two minutes sitting on the shampoo shelf it’s warm, there’s soap all over it, so you have to down the sudsy cup puddle. 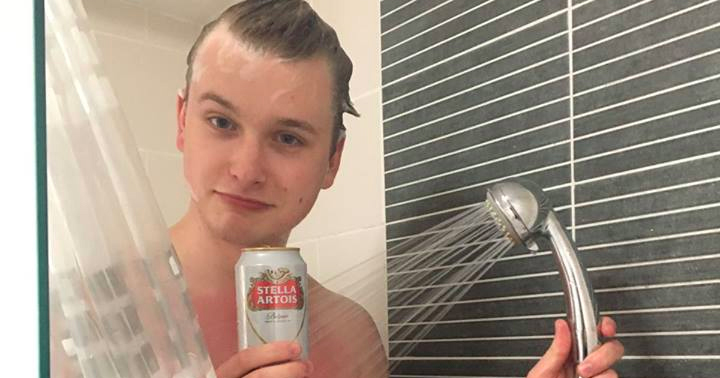 PangPang brewery have solved this problem by creating a “Shower Beer”. Designed solely for shower consumption, it’s a double strength brew served in a micro bottle, a little bigger than half a coke can.

The Swedish beer makers teamed up with creative agency Snask for the “sweet but strong pale ale.” “In a small bottle, it’s meant to be gulped in three sips while standing in the shower getting ready for the night.”

Shower Beer is a joint venture between PangPang and @snasksthlm This chubby little friend is the perfect way to wash away the work day and get ready to get down and dirty for real. It's a 10% Double PaleAle, brewed with a healthy doze of Citra, and has been left it long enough in the fermenter to start producing natural soap components. First batch sold out in minutes, but a fresh one is on its way. I won't shower until its been bottled ! Fredrik, PangPang

A photo posted by Stockholms first Micro Brewery (@pangpangbrewery) on Jan 7, 2017 at 10:46am PST

The man behind the brew, Fredrik Öst, told MUNCHIES: “We always loved the concept of drinking beer in the shower, so the idea to create a beer that would be drunk while showering was a must.”

Released two months ago, it was meant to be a one-time only offering, but thanks to overwhelming demand, a second run is in order, and PangPang’s founder hopes it will become a more permanent thing. Specifically brewed to pair well with your suds, the primary fermentation process is extended to develop a soapy flavour typically viewed as an “off” taste by normal beer drinkers. The recipe is also designed to double up as a conditioner. Yes. You can put it in your hair because the ingredients bestow softness and a citrus smell.

There’s clearly a market for this sort of thing. The r/showerbeer reddit proves it. With a 37,000 strong subscriber base and countless eerie nudes of 30-year-old scene kids drinking craft beer in their Ikea bathrooms. But for those of us who are less into Bring Me The Horizon’s back catalogue, hopefully this just means the end of road beers.