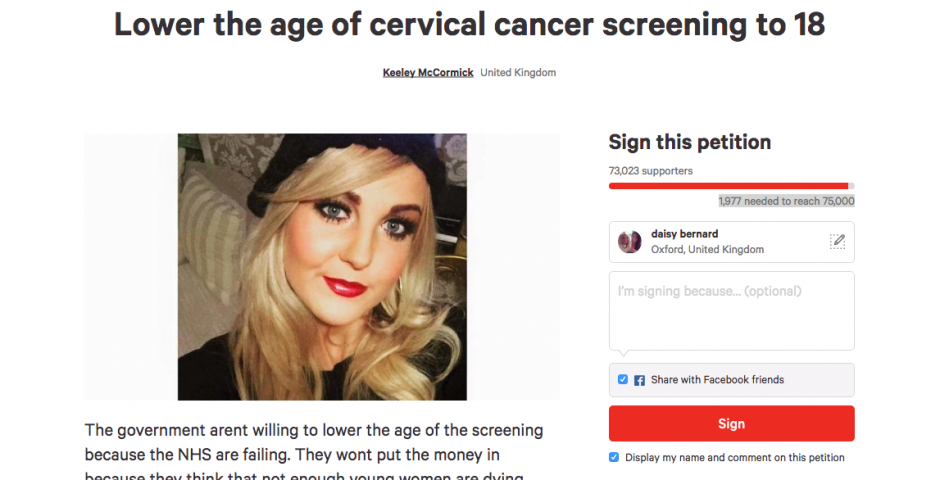 73,000 people signed a petition to lower the age of cervical cancer screening to 18

72,023 have signed a petition to lower the age of cervical cancer screenings to 18 years old.

It was launched by Keeley McCormick and Josh Cliff, friend and brother of Amber Rose Cliff who tragically died from cervical cancer at 25. She had previously been denied a smear test for being too young.

At the moment, cervical cancer screening is only offered for women over 25. Younger women are given an option for a smear test, however it is often much harder to get. The International Agency for Research on Cancer also recommends women should not start cervical screening before the age of 25, as they believe it does more harm than good.

But if Amber had been given the screening she’d asked for, she may still be alive today.

Keeley told Babe: “Too many young women aren’t being offered a screening because they are considered too young, but when it comes to them being 25 it is too late and the cancer has already done the damage and its too late by then.

“We need the option to have one if we are presenting symptoms, to rule it out. Cancer doesn’t have a age limit so why should smear tests?”

“If the smear test age was lowered to 16 or 18, this beautiful young woman may have caught it in time and lived a long healthy life. The only thing we can do is move forward and help others.”

1,977 signatures are needed to reach it’s goal of 75,000. They need 100 thousand signiatures to take it to parliament hub, sign here to help.