For the money-conscious sandwich connoisseur, there’s nothing quite like the humble meal deal.

The choice you get for three-ish pounds is undeniably incredible, but can often be daunting: hence the existence of entire online communities to critique people’s sandwich/snack/drink combos.

But what combination would a culinary expert make, if he were meal deal-inclined? We headed to the Lancaster London hotel to ask their Executive Head Chef, Ben Purton. 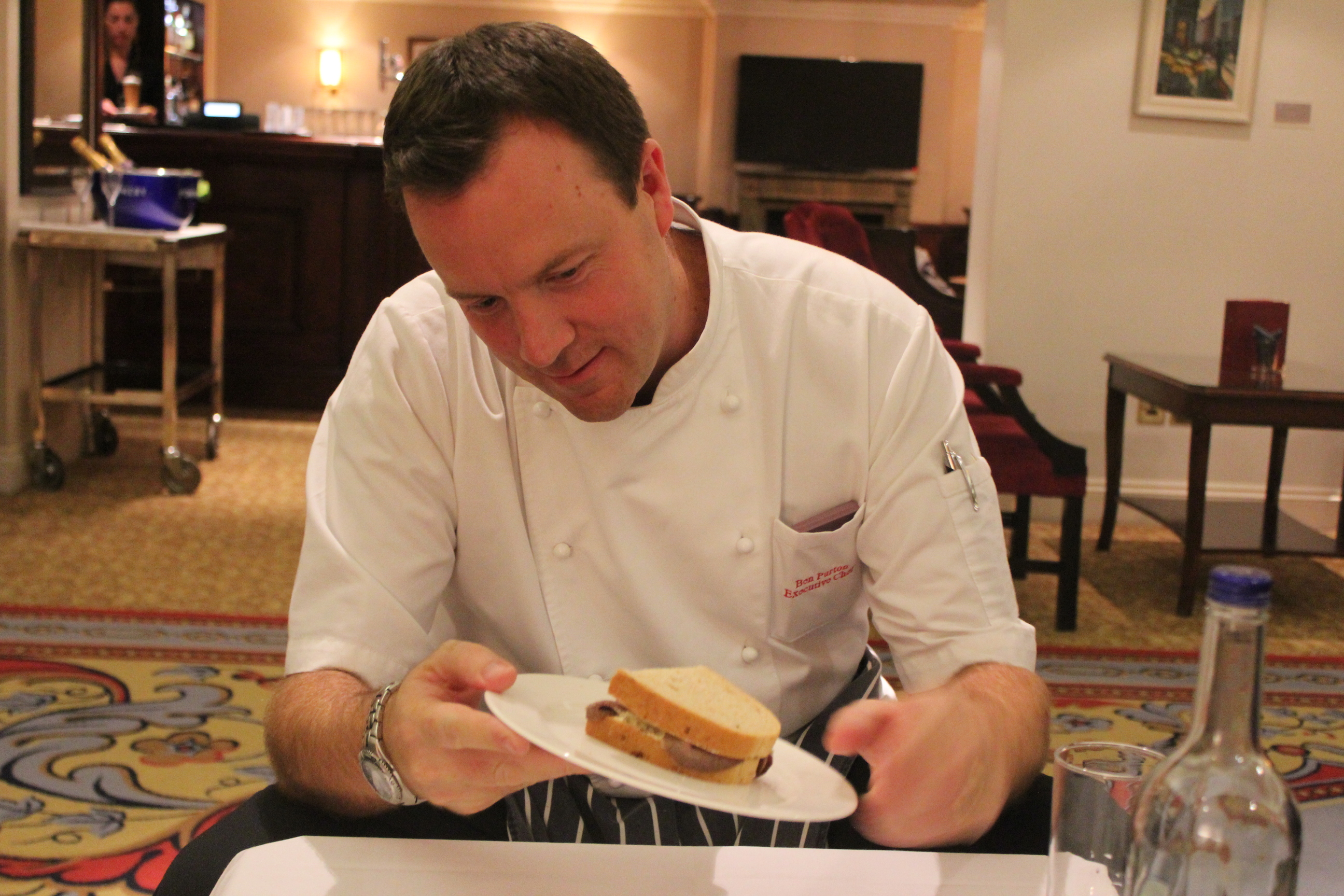 Sitting down with Ben in the hotel’s swanky lounge bar, I set him to work testing some of the finest selections the supermarkets had to offer. 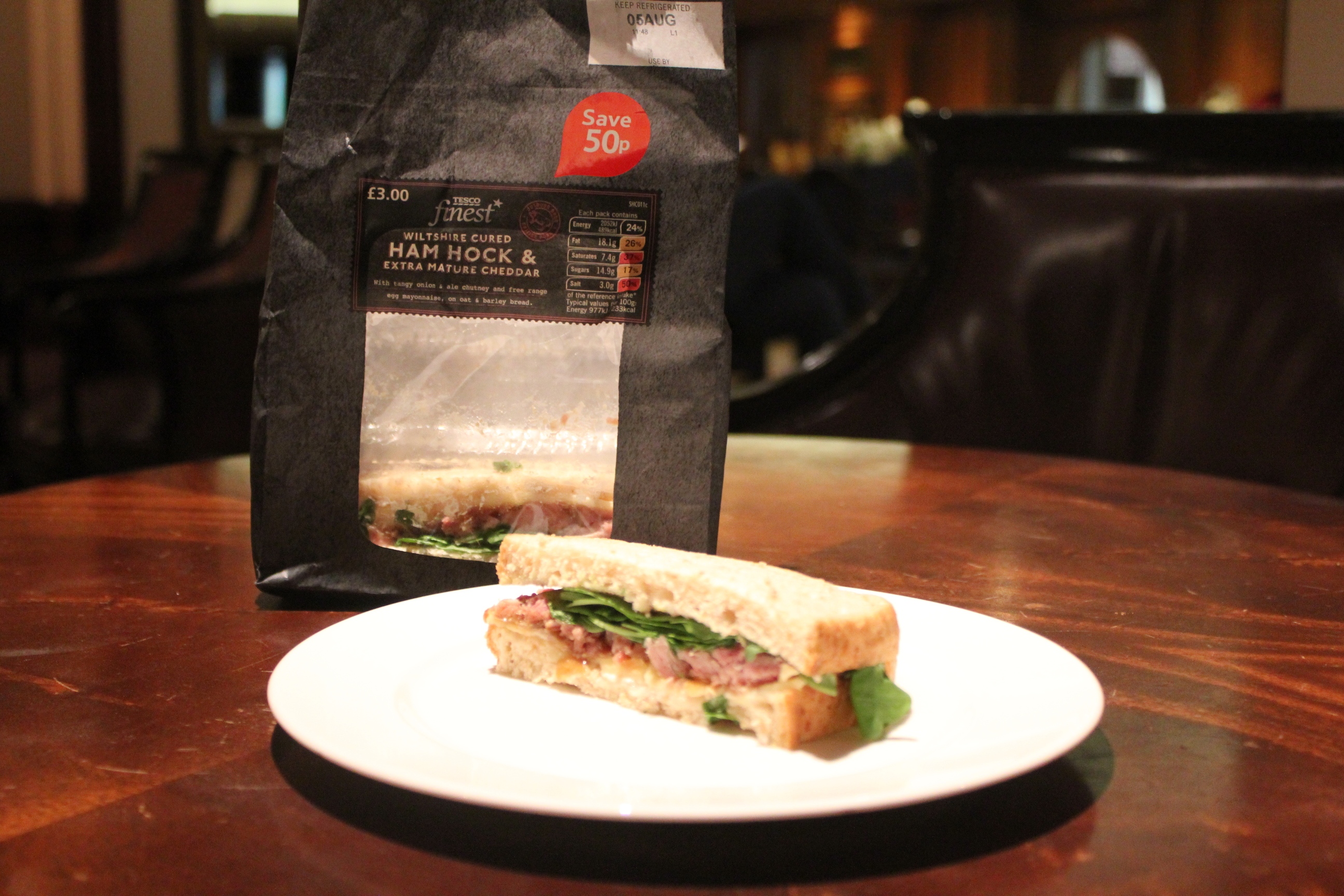 It looks good. Maybe a little bit light on cheese. I like the way that they try to make it look really bulky by putting all the filling in the middle, but when you take the lid off you’ve virtually got nothing on the outsides all round.

The bread’s nice and fresh though, and it’s got a really strong smell – like there’s an onion chutney in there or something. It tastes like a cheese, onion and rocket sandwich. They’ve taken ham hock, which has such a delicate flavour, and overpowered it with a really strong onion chutney and the peppery rocket which comes through at the end.

It’s not altogether a bad sandwich, but I think you’d struggle to say ham hock unless you picked out an individual bit and had it on its own. The ham hock individually is really nice.

I’d say from the type of bread and the fact it’s got plenty of filling, it’s trying to be upper-end. It’s got the look of something you’d expect from M&S, but it sounds much better than it tastes.

More than any kind of fizzy drink I’d say a still fruit juice instead.

For the snack you’ve already got cheese, chutney and ham, so I’d probably look at a fruit element rather than a crisp element to balance it out a bit more. Either that or a crisp with a ham flavour to enhance the sandwich a bit better.

PAIR WITH: Apple slices and a bottle of Tropicana orange juice. 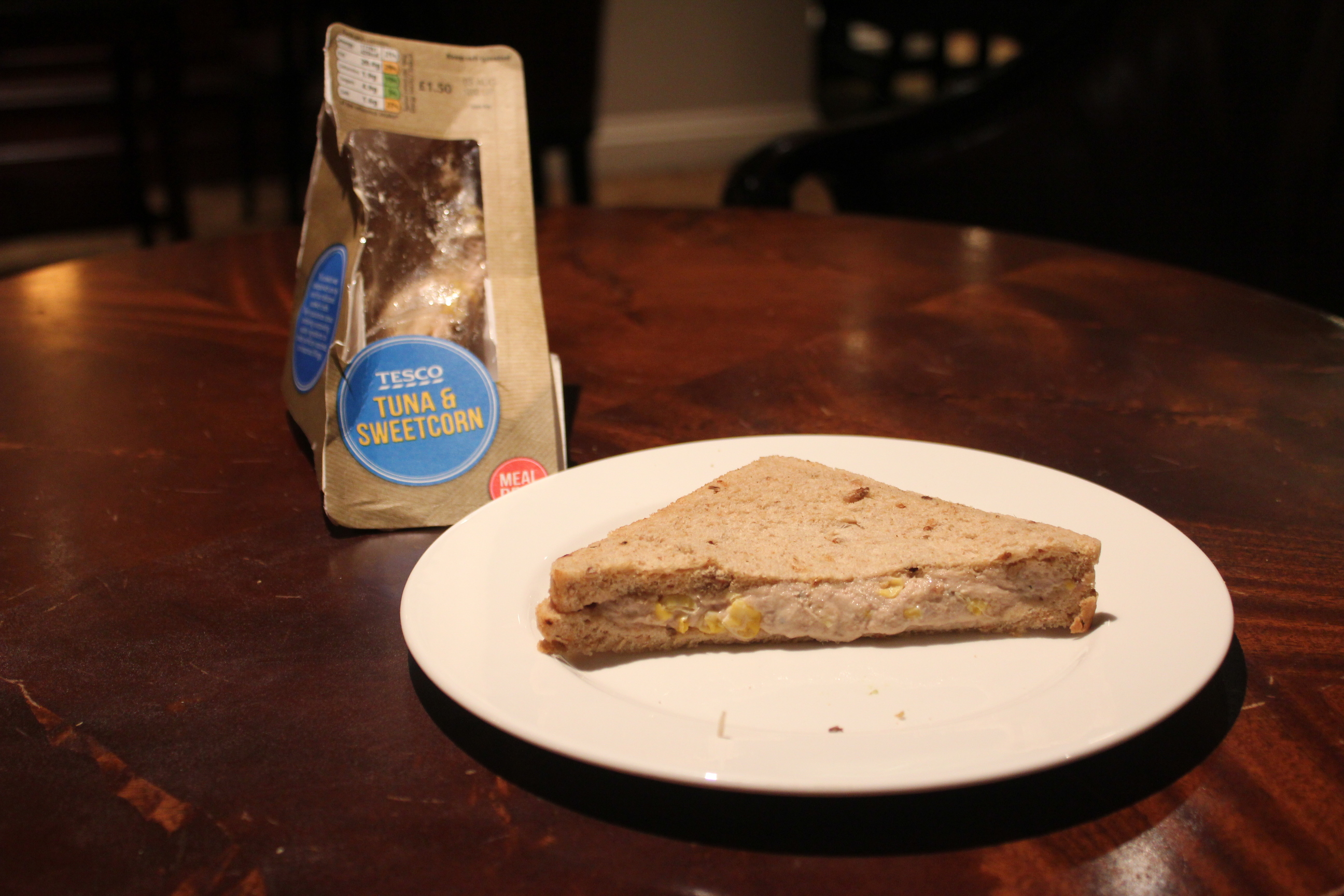 It’s not overly inspiring, and it’s quite sparse. It’s quite a poor excuse for a sandwich. The filling is really wet, which makes the bread quite limp.

The flavour is OK, but a nice bit of black pepper or something in there to bring that tuna alive would be good. Sweetcorn and tuna is a fairly nice mix, but it doesn’t really bring anything to this.

I’d hate if it was anything other than lower-end. Tesco, maybe? I’d still expect better because it wouldn’t take much to make it at least a pleasant sandwich.

A crisp with onion in it, or salt and vinegar. There’s not enough flavour to worry about pairing it.

Maybe a large bag of crisps to bulk it out, and then a fizzy drink at the end. Whichever one takes your fancy.

PAIR WITH: Monster Munch and a Dr Pepper. 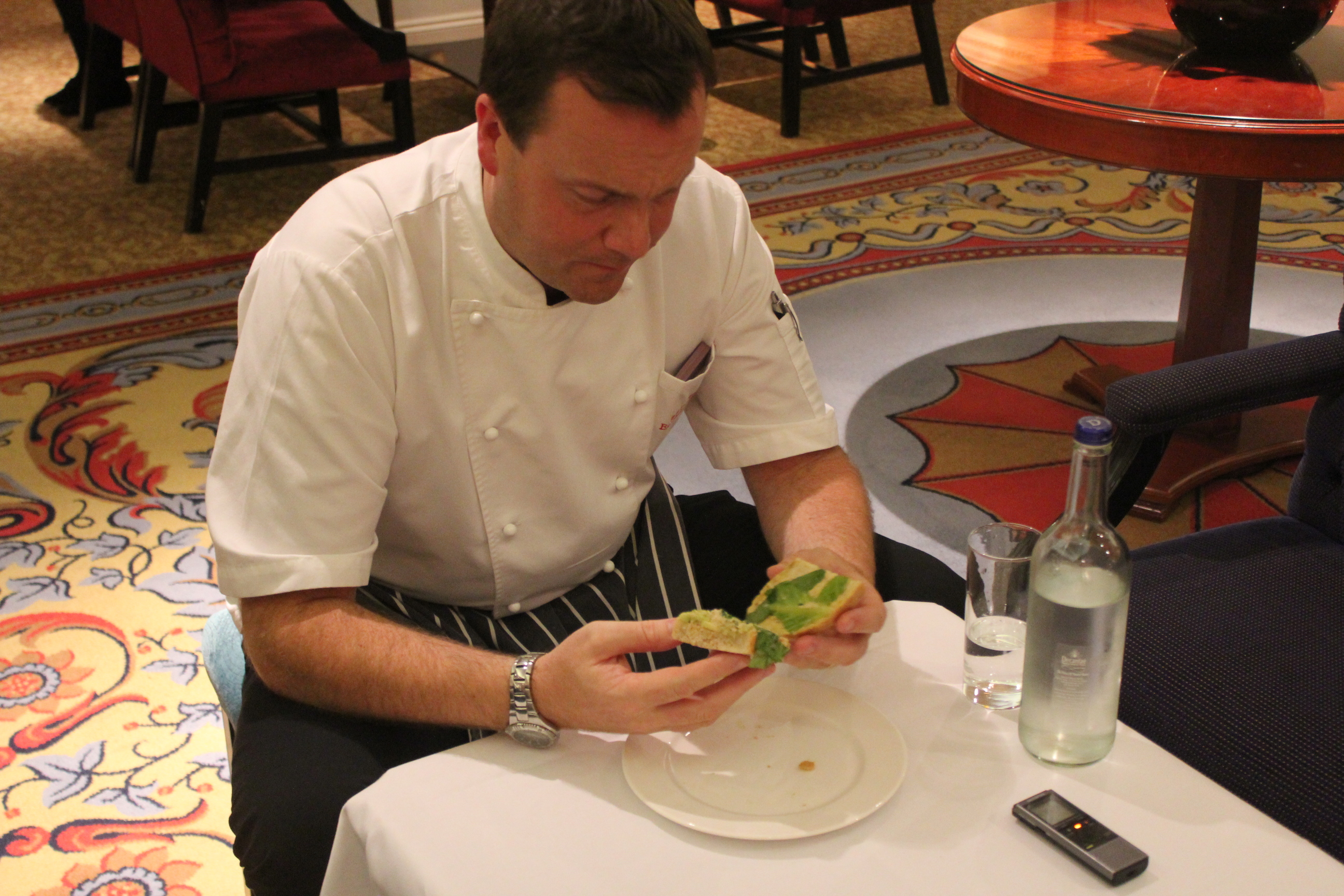 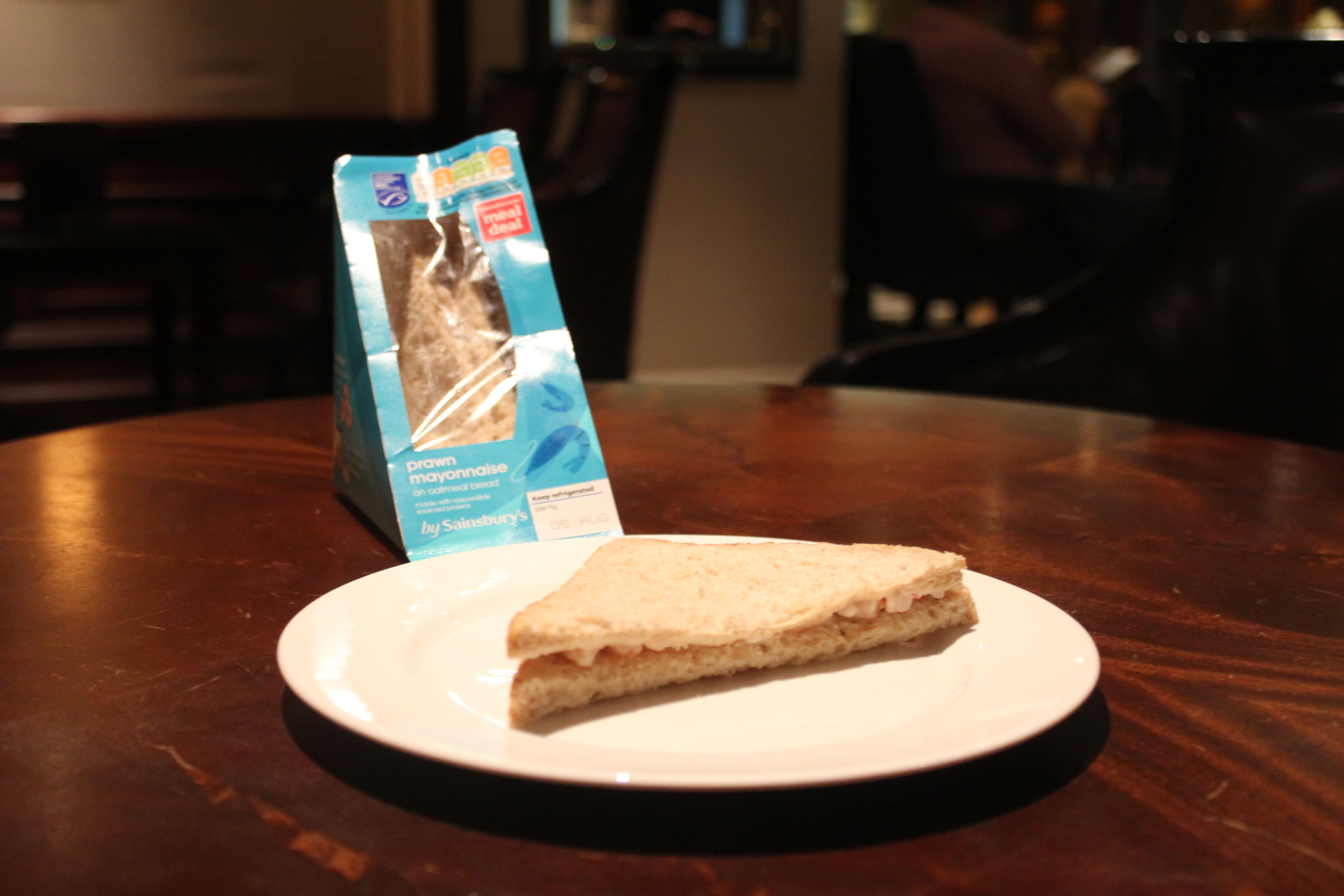 Aesthetically it looks really, really dull. There’s probably only about five or six prawns inside, and there’s more mayo than there is prawns. It’s a really sad looking sandwich.

It’s like eating two bits of bread with a faint prawn-flavoured mayonnaise. I’d really like to not have another bite. It’s really bad – there’s nothing to it at all.

I’d expect it to come out of the Basics range of somewhere. Sainsbury’s or Tesco.

I’d go for the biggest packet of crisps available – something filling, because the sandwich isn’t going to do it for you. Any crisp you have is going to overpower the sandwich, and not in a bad way.

I’d probably wash it down with a can of Coke. The more fluid you can take in after eating that sandwich, the better.

PAIR WITH: King prawn McCoy’s and a can of Diet Coke. 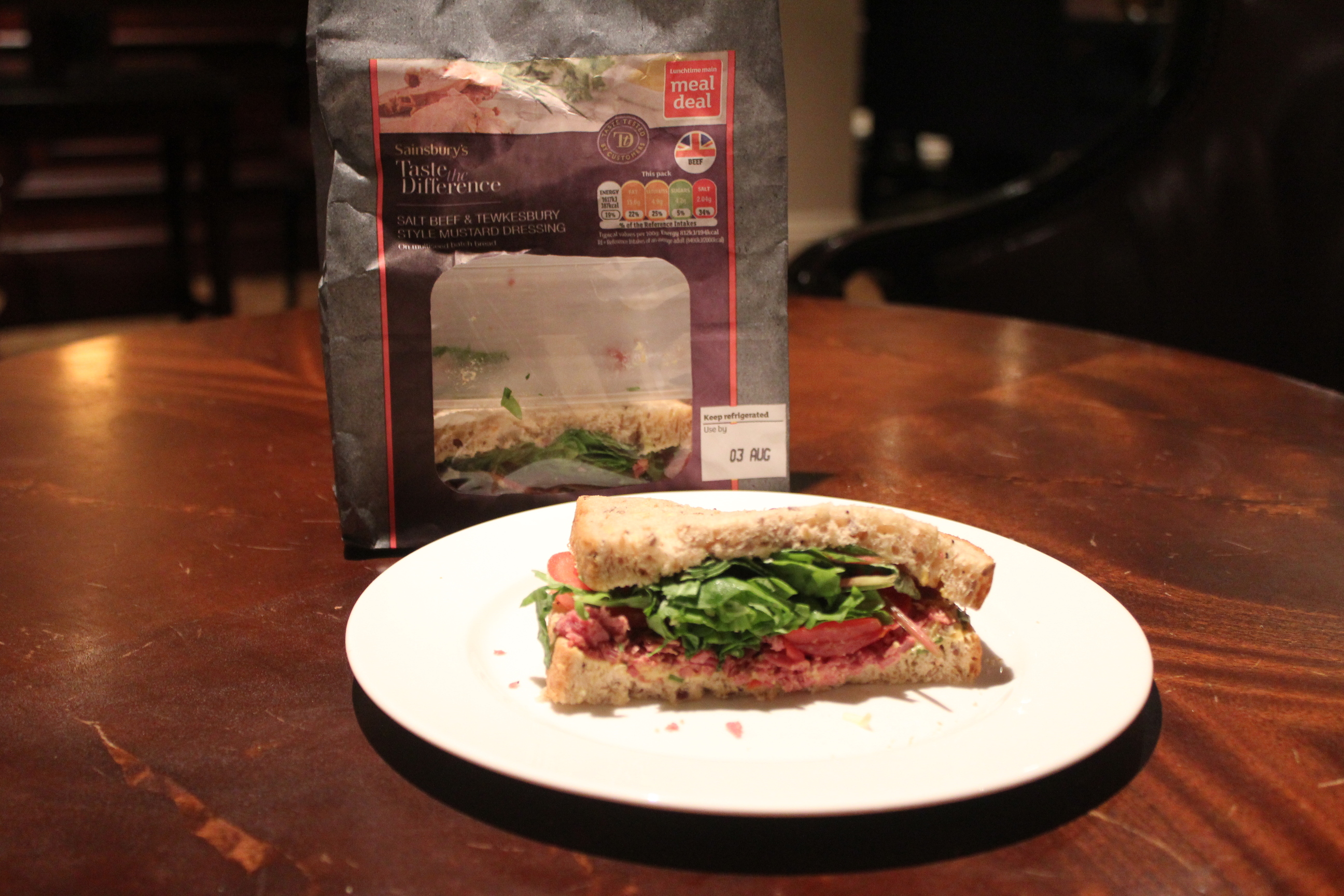 Now this looks like a sandwich. If you were making one for yourself at home, it would look like this. Salt beef is a lovely  filling as well.

It’s great. Really nice salt beef, the tomato and lettuce set it off, there’s a peppery, mustardy flavour to it too which works really well with the beef.

Upper-range. There’s some really nice stuff in the Sainsbury’s and Tesco upper-end, so I reckon one of those.

From a crisp angle, something like a bite or a snack or a cracker. Then in terms of a drink, I wouldn’t really want to lose the taste of the salt beef so maybe a very lightly flavoured water.

PAIR WITH: Sweet chilli Sunbites and some Volvic Touch of Fruit. 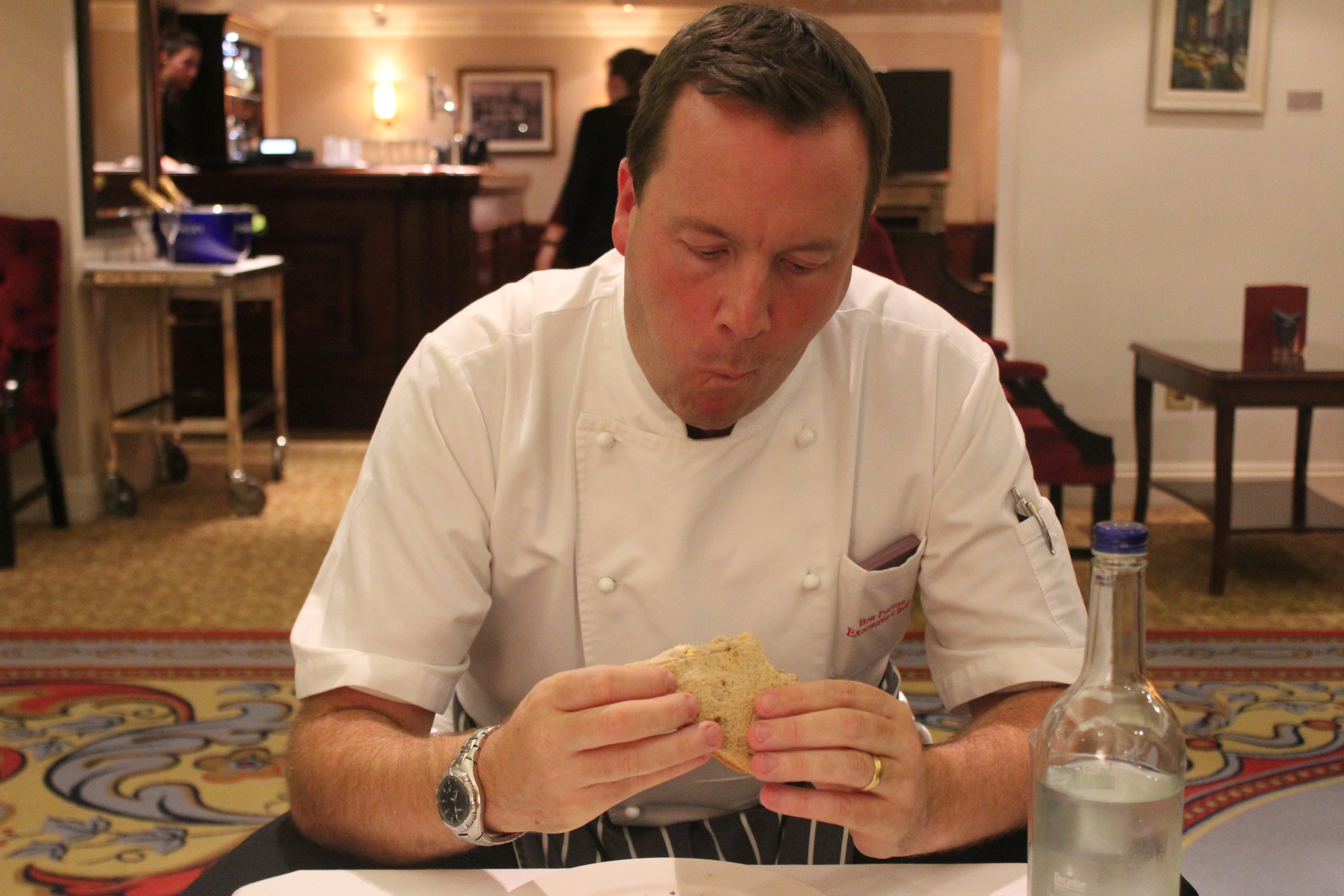 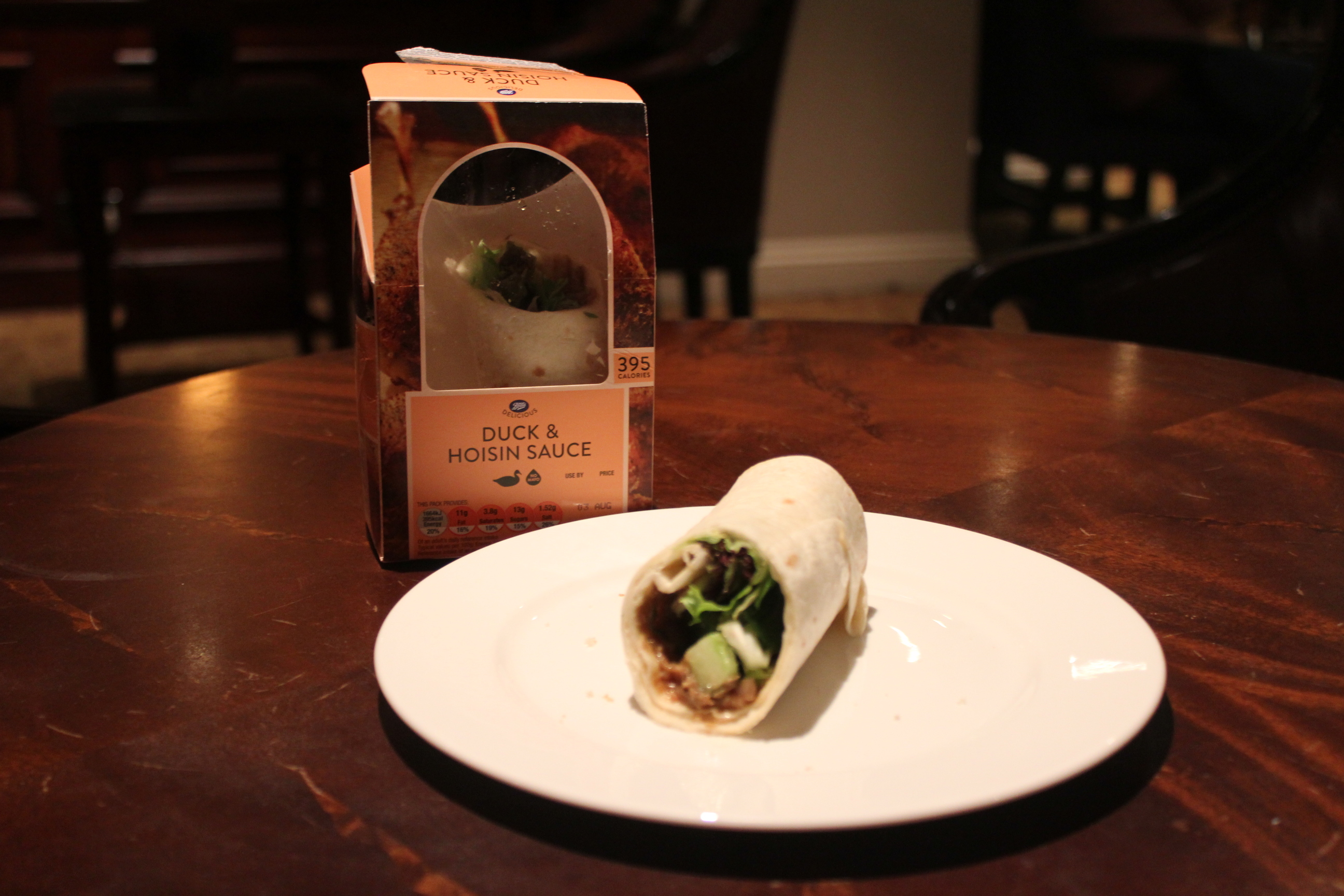 Right up my street. Duck and hoisin works really well, and I like it in a wrap because it’s similar to the way you’d have it in a Chinese restaurant. It smells like duck too, which is really good. It’s interesting, though – when you open it up the amount of filling is really, really minimal.

I think it’s just lacking in more of the stuff you want. The actual flavour of the duck is really nice and there’s a nice bit of hoisin coming through, but you lose it so quickly because there’s so much wrap and a hell of a lot of cucumber.

Not overly a bad flavour, but I’d probably just eat my way down the side and leave the half with all the bread.

It’s a difficult one because the flavour is nice, but it’s got the elements of it trying to be more than it is, with the cheaper ingredients being the main part.

There’s nothing wrong with the quality of the ingredients, it’s just the proportions are wrong. I’d say low to mid-range, and it could really be from anywhere. It’s the kind of flavour you’d get in most places.

It would go really nice with a vegetable crisp. It would all feel quite healthy then, so maybe a nice fresh smoothie – something which will really finish off that healthy element. Nothing too strong, because the flavour of the duck lingers nicely.

PAIR WITH: Sweet potato Kettle Chips and an Innocent smoothie. 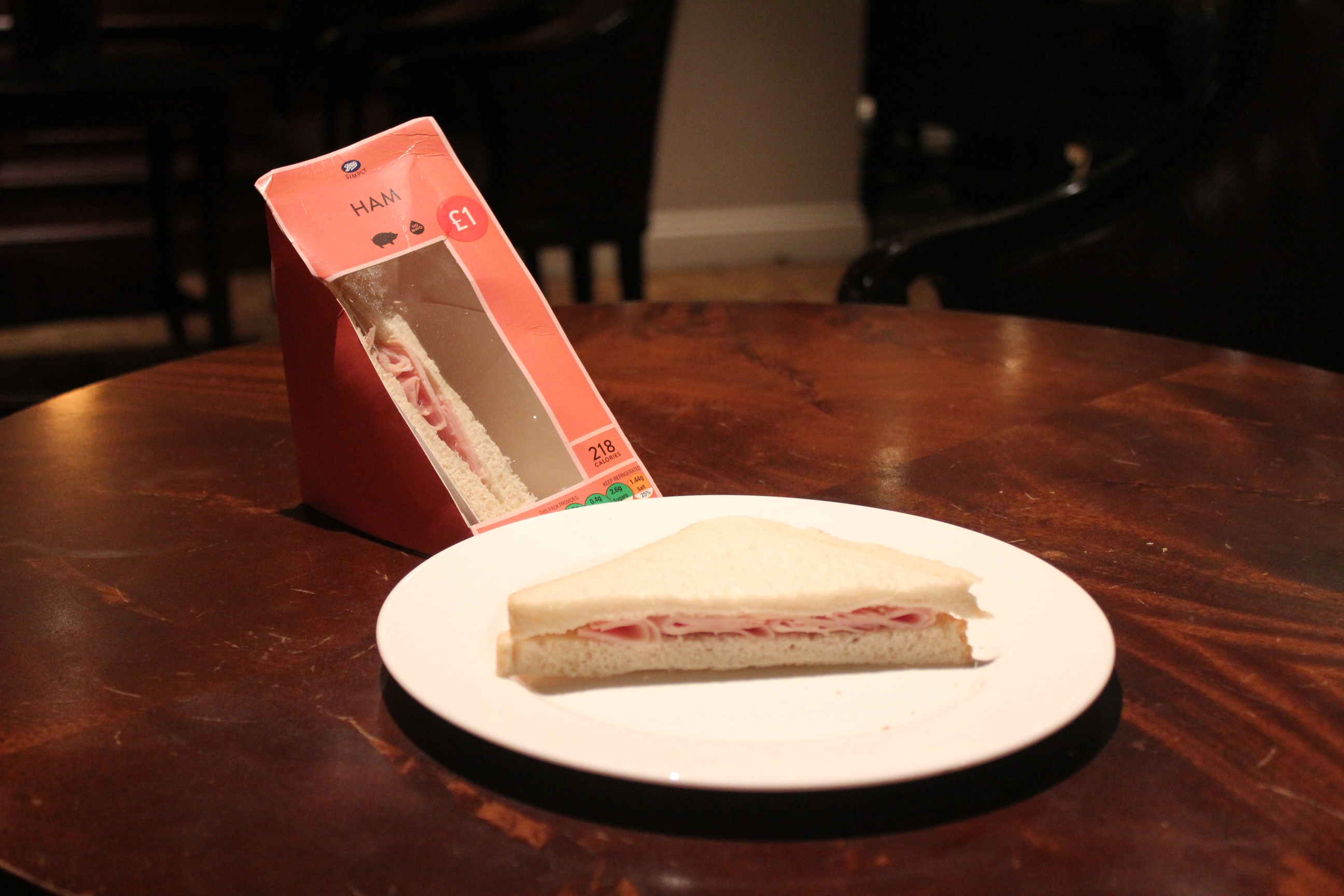 Oh my God, this is really grim. When you pull it apart, the ham isn’t crazily bad but there’s such a tiny amount of it and it’s so processed.

The biggest bag of crisps you can get – Quavers would work – and then a big fizzy drink. You can chug that, and then run back to the shops to get something else to eat.

PAIR WITH: Quavers and a bottle of Lucozade. 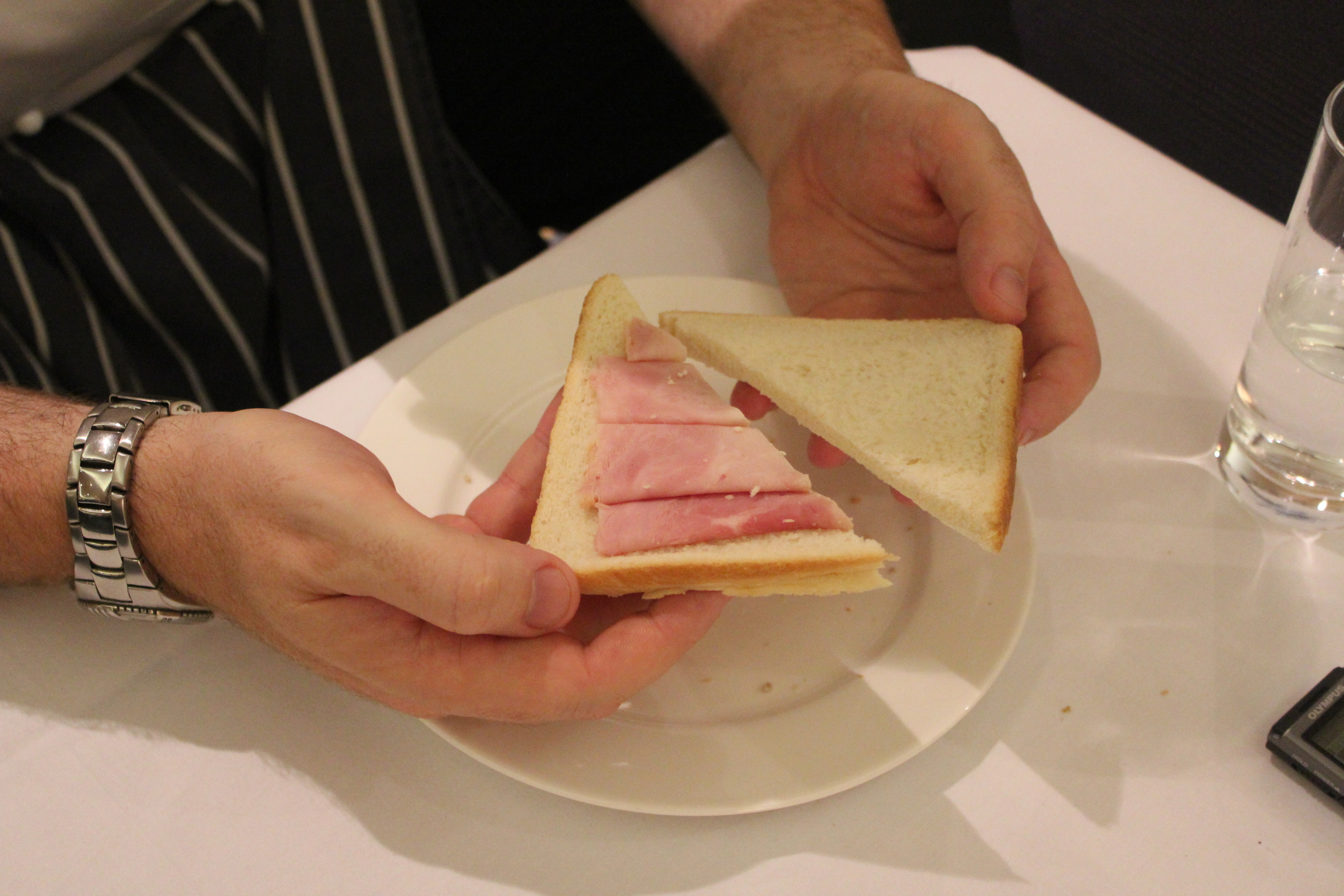 (NB: the M&S meal deal does not include a snack option) 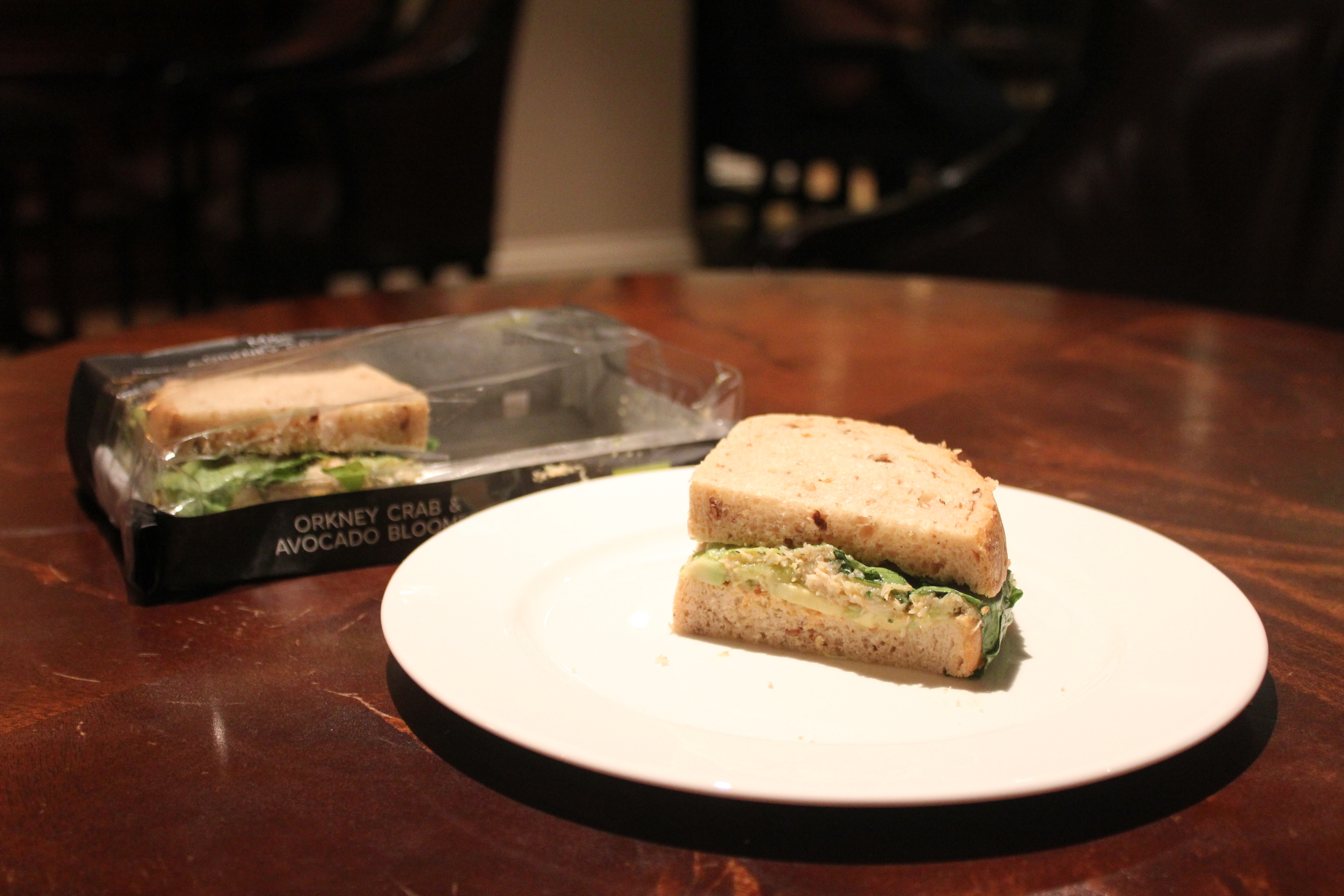 It’s definitely trying to be a proper sandwich. Nice amount of filling, with crab and avocado and lettuce all the way through it. It doesn’t smell strongly of crab, but you know it’s crab as soon as you bite it.

It’s nice. The crab really comes through, there’s a hint of spice – chilli or black pepper – and then the lettuce and avocado cool it back down again which is nice. Fresh bread, loads of filling: crab is much more expensive than prawns, but you still get triple the amount than you got in the prawn mayo.

Anything that says it’s got “Orkney crab” rather than crab has got to lend itself to being high-end. It screams M&S – it tastes how it would taste if you made it.

A cloudy lemonade would work really well with this – nothing too sweet. 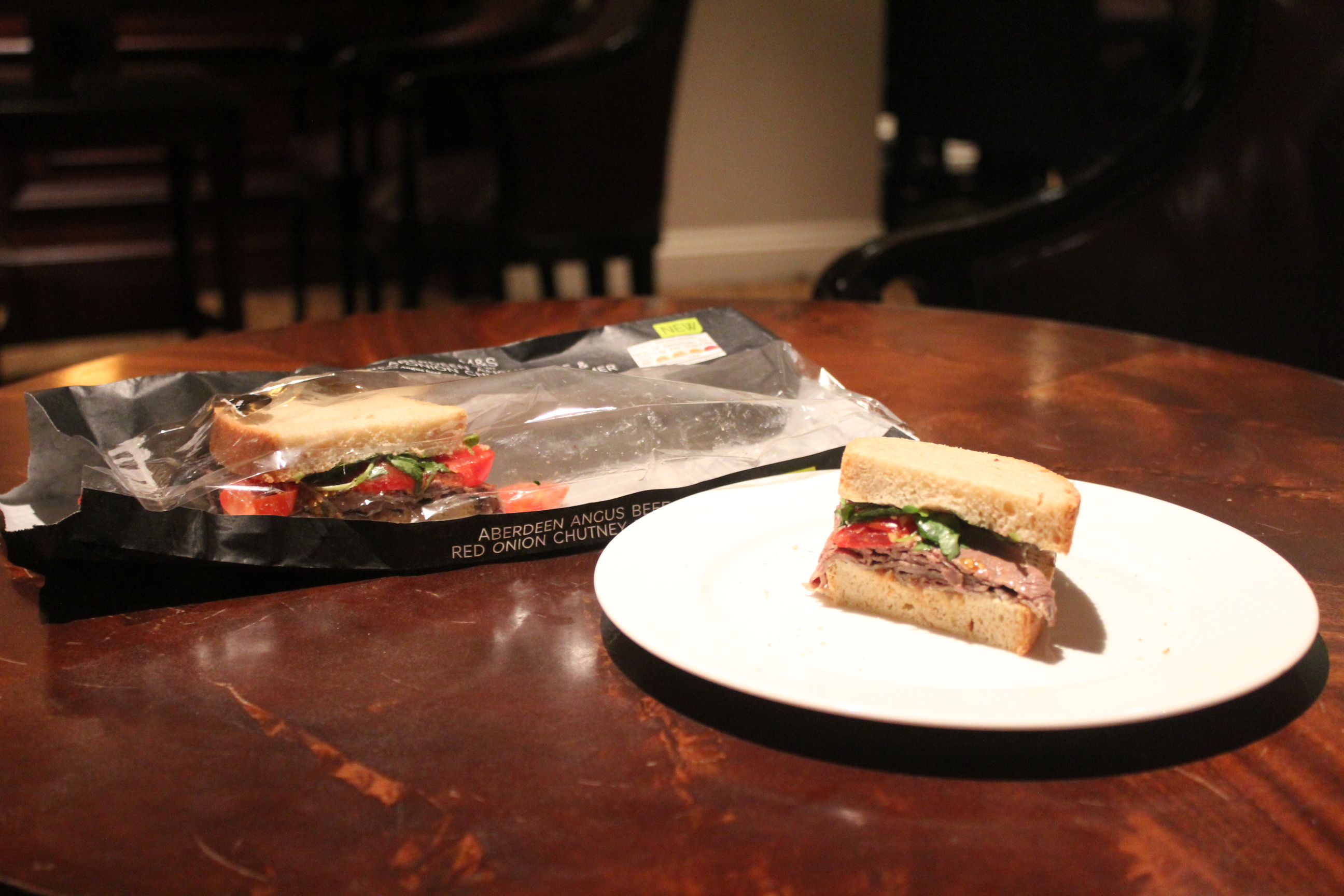 Again, that looks like a proper sandwich. Loads and loads of filling. The bread’s a bit stale though, to be honest.

It sounds so much better than it tastes. There are all these nice little buzzwords – Aberdeen Angus and caramelised red onion – but it all just feels like it’s lacking something. It’s actually quite bland. It’s not overly bad, but it doesn’t deliver on the name.

It’s trying to be from one of the high-range ones, but it’s fallen short so I’d hope it’s not M&S. It is? It sounds like it should be, but they don’t normally let you down with the flavour and they have here.

I think the berry smoothie might be a good addition to that.

PAIR WITH: A super berry smoothie.