Which Game of Thrones house is your uni?

No-one wants to be the Lannisters

Season six has come to an end, and most of us are feeling a great Game of Thrones-shaped hole in our lives.

But what better way to reflect on the greatest show of all time than to peer into its lore – and apply it to the real world in which we live.

These are the houses you’d be in if your uni was in Westeros. Fly your banner proudly. 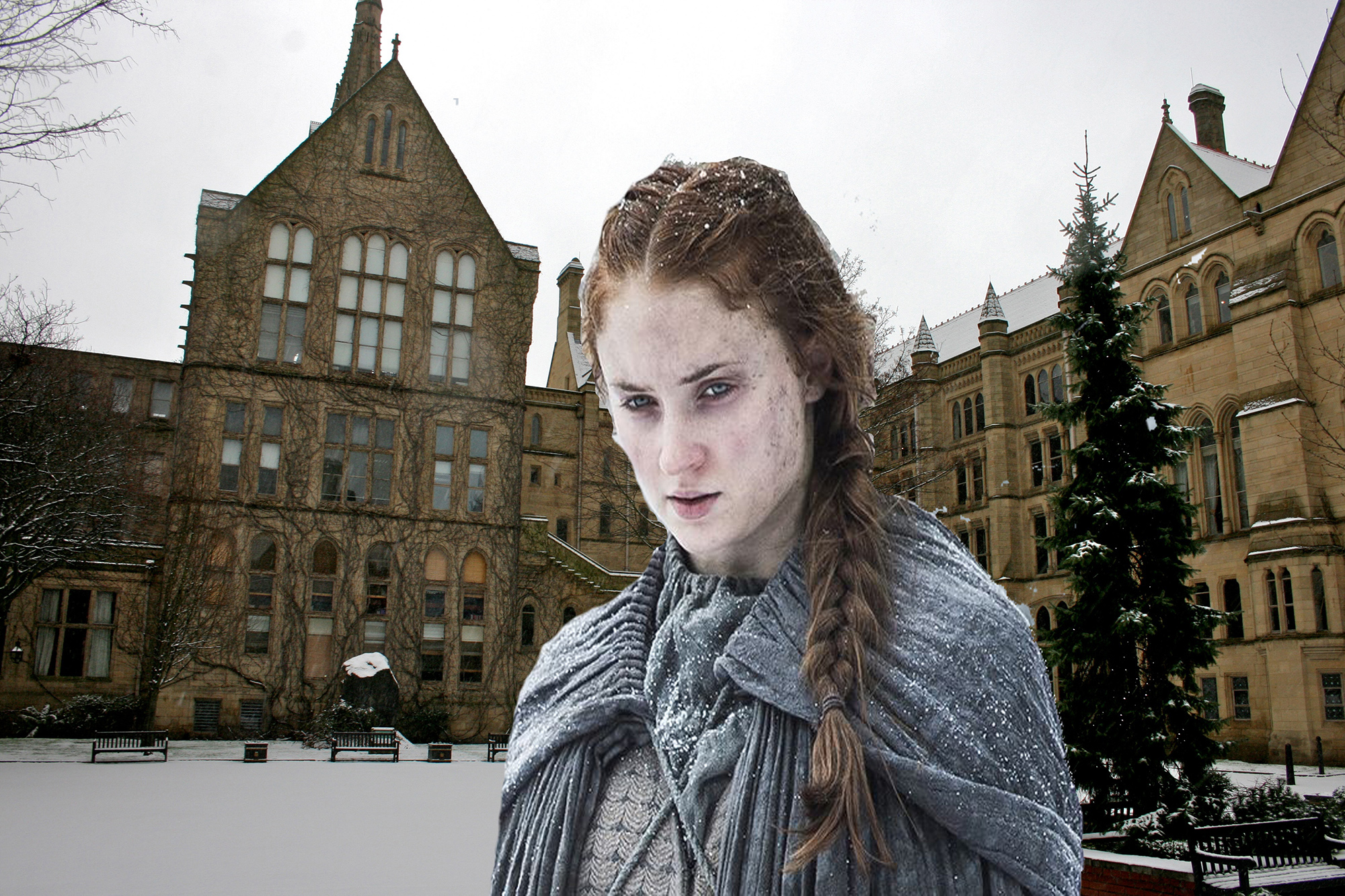 Winter is always coming in Manchester, and with it comes vintage furs and sullen faces.

Whether it’s Sansa and her househead braids, Jon’s recently-adopted man bun, Bran’s ketty legs or Robb, for whom surviving was too mainstream, you’re all basically just miserable, bearded hipsters who knew winter was coming before it was cool. 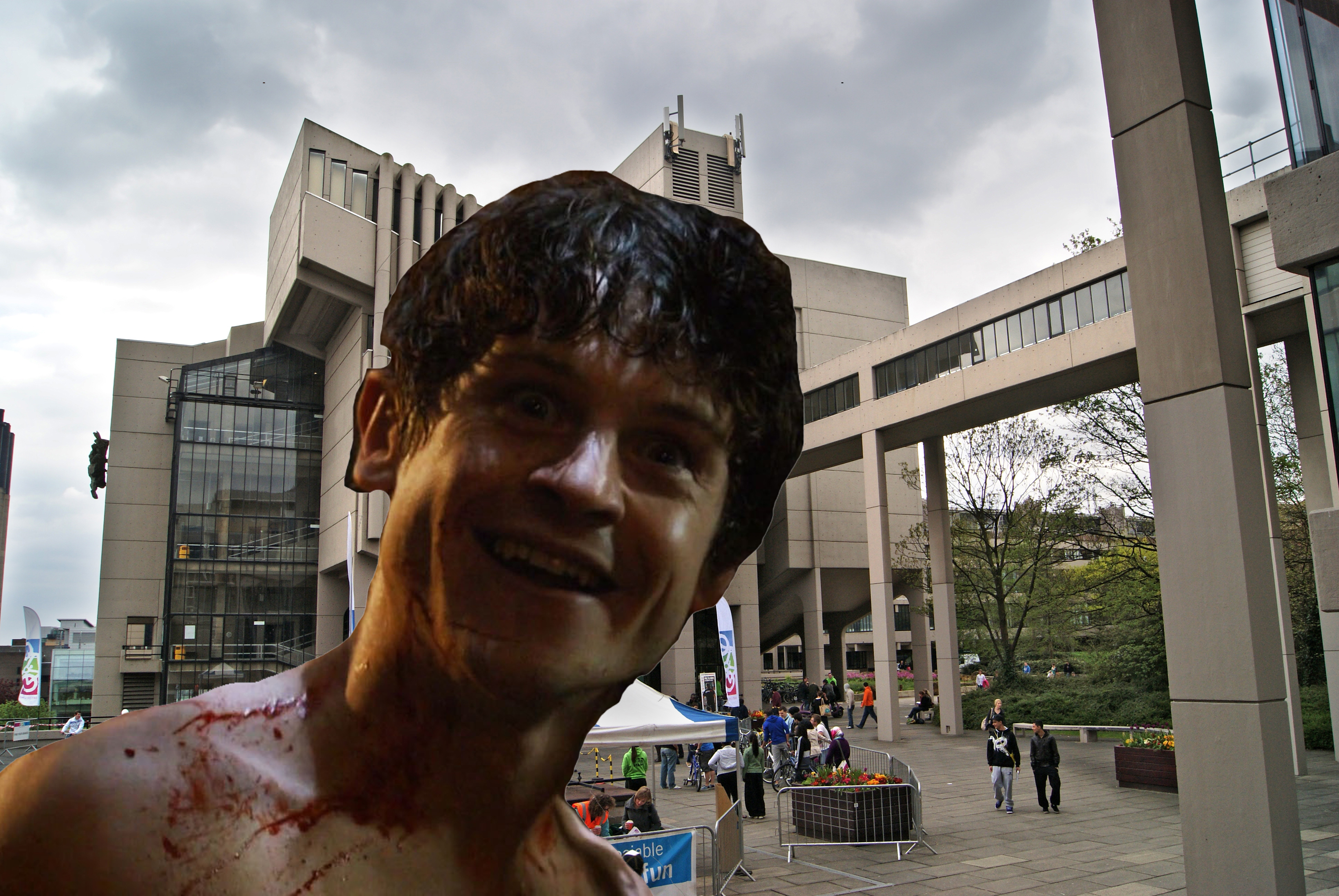 Whether it’s the pills or the time you’ve spent keeping yourself awake in the Laidlaw, there’s something about your wide-eyed manic grin that creeps everyone else out.

Sure, you may count Exeter as allies and have succeeded in stealing the title of Kings of the North from Manchester, but don’t be too happy – we’ve heard Leeds has gone to the dogs.

If you got your fingers bitten off on a night out, you’d probably laugh it off as banter.

You’re huge and imposing, you have no qualms with telling Leeds that they’re cunts, and you’ll lay into anyone who gets in your way – even if it means necking off with a Wildling on the battlefield/Pryzm dancefloor. 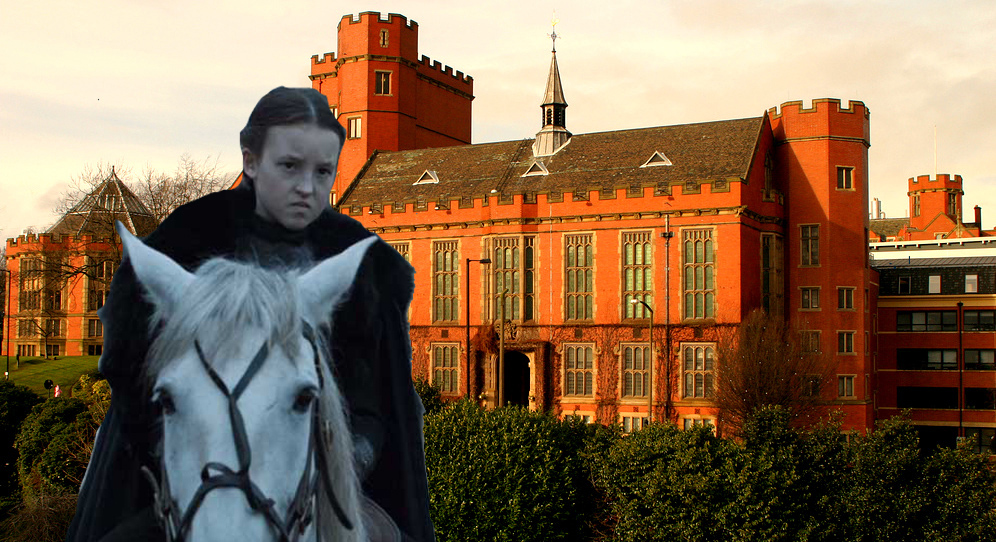 Sheffield knows no kings but the kings in the North, whose names are Manchester and Leeds.

The rest of the Yorkshire unis marched into the top ten – you refused the call.

Deepwood Motte is basically the South Thanet of Westeros – you’re heavily suspicious of outsiders, and you’ll do anything to keep those pesky Iron Islanders out.

You mainly stay oblivious to the rest of the world from the top of your ivory tower, but when you do get involved in the battles/league tables you can really do some damage.

Plus you were probably breastfed until adulthood. 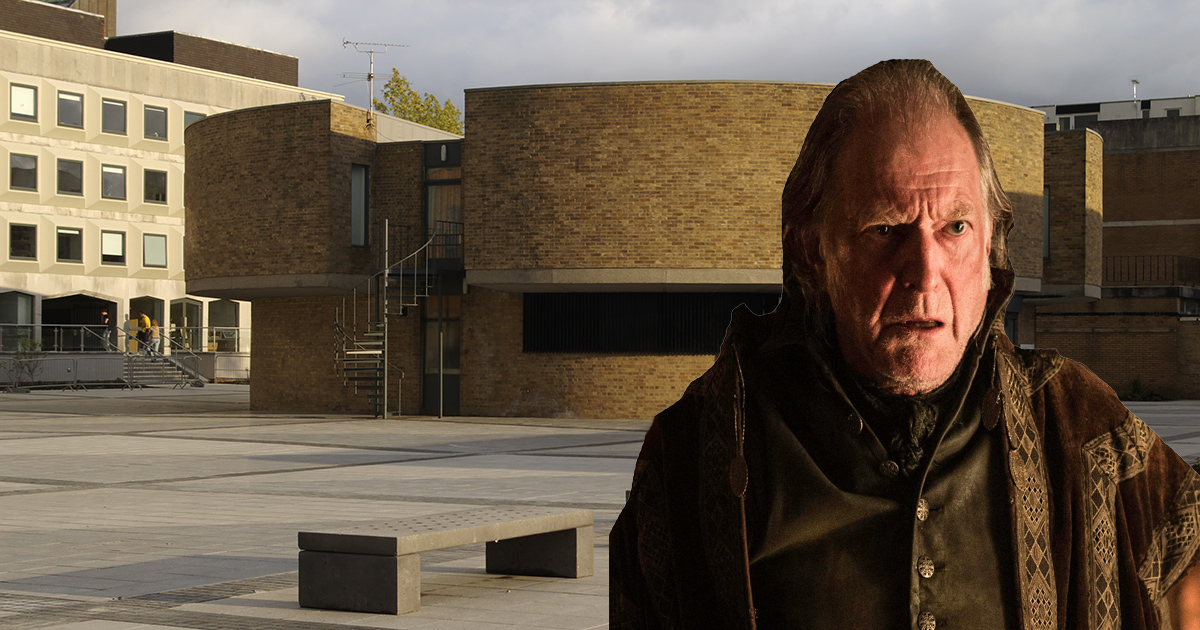 You’ve always seen yourself as one of the top ten houses in the kingdom, and you’ll slit as many throats as necessary to get there.

Manchester and Leeds are both lying in your wake, though, so who’s laughing now? 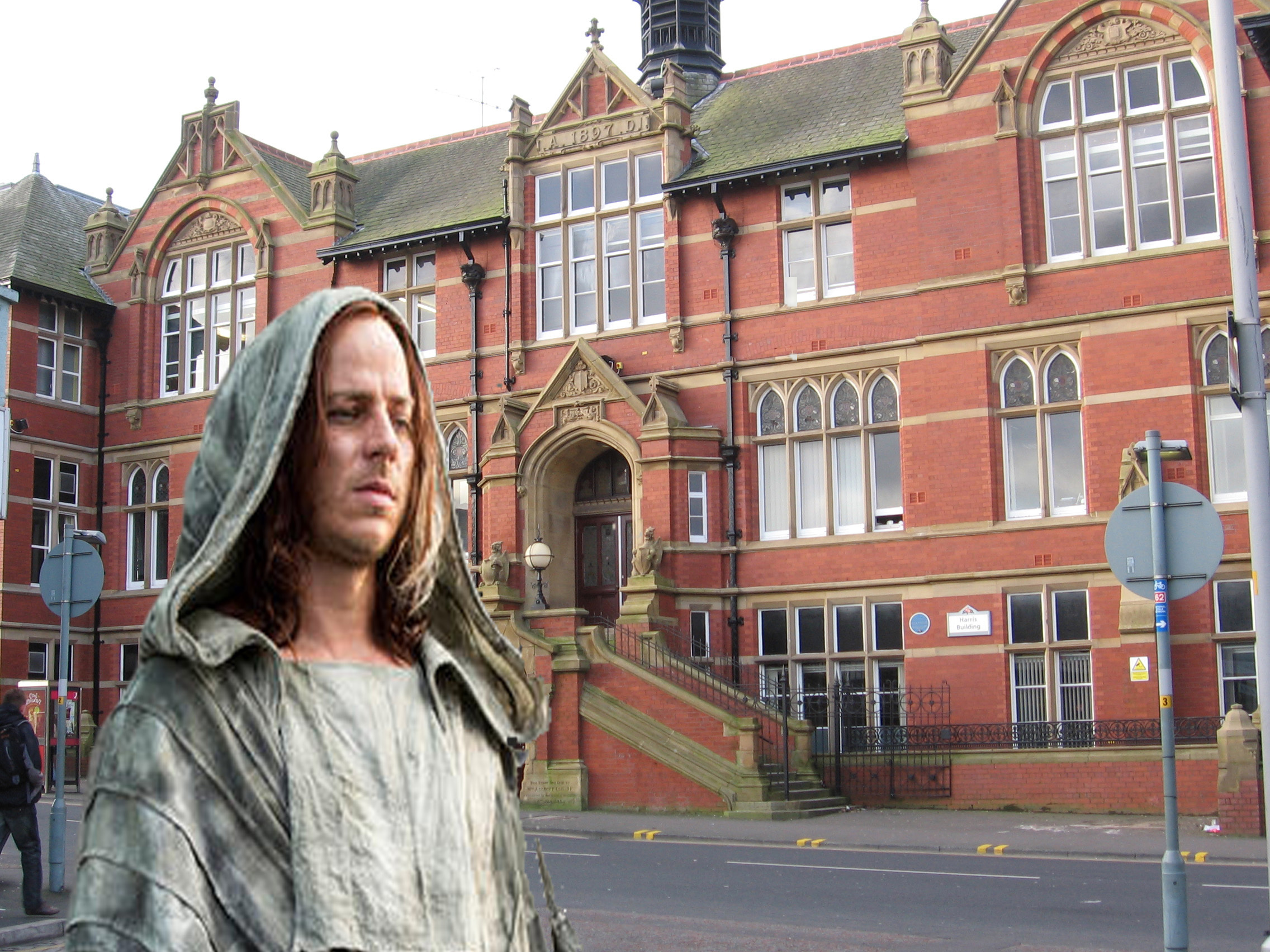 A uni has no name. At least, no name which makes sense.

Mary Beard is their Queen of Thorns. A rich mix of smart women who know how to get their own way and mop-haired twinks who sidle up to you at Cindies and ask you which college you’re in, Cambridge has been Growing Strong for hundreds of years – and has been firmly up its own arse for just as long. 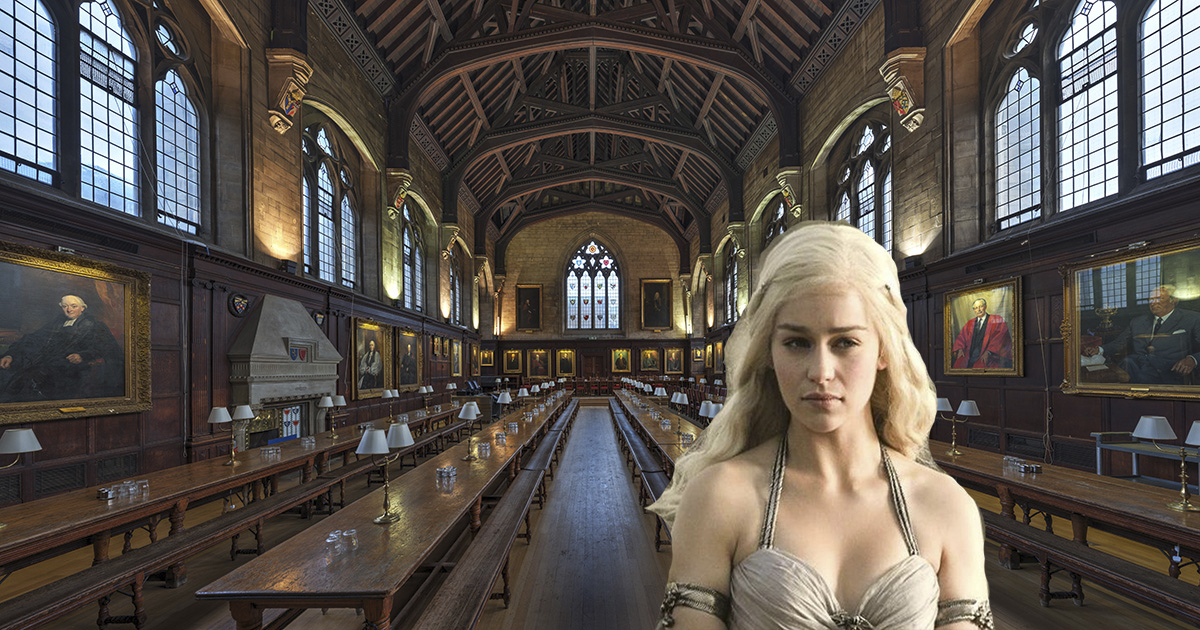 Dragonflame tearing through the fleet in Slaver’s Bay is nothing compared to a crewdate at Arzoo’s, and Rhodes Must Fall was about as dramatic as the siege of Meereen.

Your ancestors may have been raving mad colonialists, but you see yourself as a much more liberal breaker of chains. Look here for the new leaders of the free world.

You used to be up there, man. You were the Sword of the Morning, the best fighter in Westeros and one of the best unis in the UK. Now you’re nothing more than an anecdote in the glorious history of better unis like Manchester and Bristol.

You’ll start off in the Renly stage: pretty, optimistic and sexually ambiguous.

Then comes the Robert stage: shouty, sweary, spilling cheap wine and curry sauce down your beard.

By 5am you’ll be a Stannis: sitting there with saucer-like pupils, telling anyone who’ll listen that you can see shadow demons in the fire.

You’re as rude and stubborn as the Blackfish, and you look as unwashed as Edmure after two years in prison. You probably have a trout as your sigil.

Because it’s hard to know what was messier: Oberyn Martell’s exploding head, or LURFC Salou ‘16.

You’re meant to be quite important, but that doesn’t stop you getting fucked over by literally everyone else, all of the time.

Thank God you have your Russell Group reputation/Thoros of Myr to keep bringing you back from the cold nothingness of irrelevance and death.

You meet one and you think they’re lovely when you’re in their college. But then your posh boyfriend from Durham takes you, a poor state educated student, back to their home.

Their Dad is a racist, disappointed their son couldn’t make it into Oxbridge, their Mum tries to be lovely but gets walked over whenever she tries to speak her mind, their sister is annoying and pretentious and there’s strange antiques that look like they mean a lot all over the wall.

Just like their red fox is surrounded by a ring of flowers, so too are you with flowers in your hair and palm trees on your coastline in Cornwall. 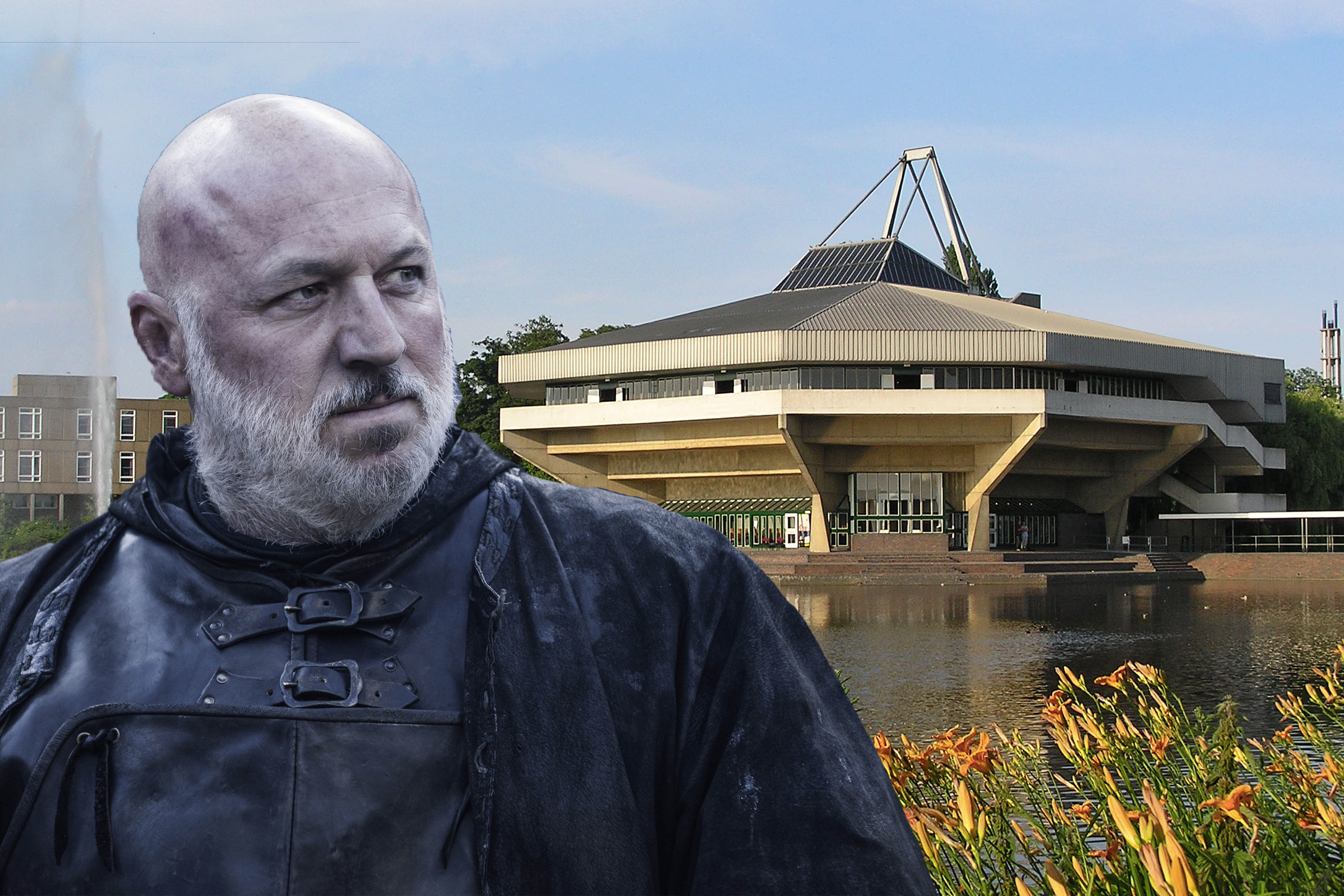 Posh and salty, you don’t fit in outside of the home counties. Clad in gold, if you bickered with an actual Northerner you’d probably lose your head.

Because you’re by the water?

Boring and generic, but commendable nonetheless. You’re a small house, with some great feats long ago but they’re long forgotten.

It feels like they play a major part, but once they leave you completely forget about them for someone younger, more attractive and with better prospects. 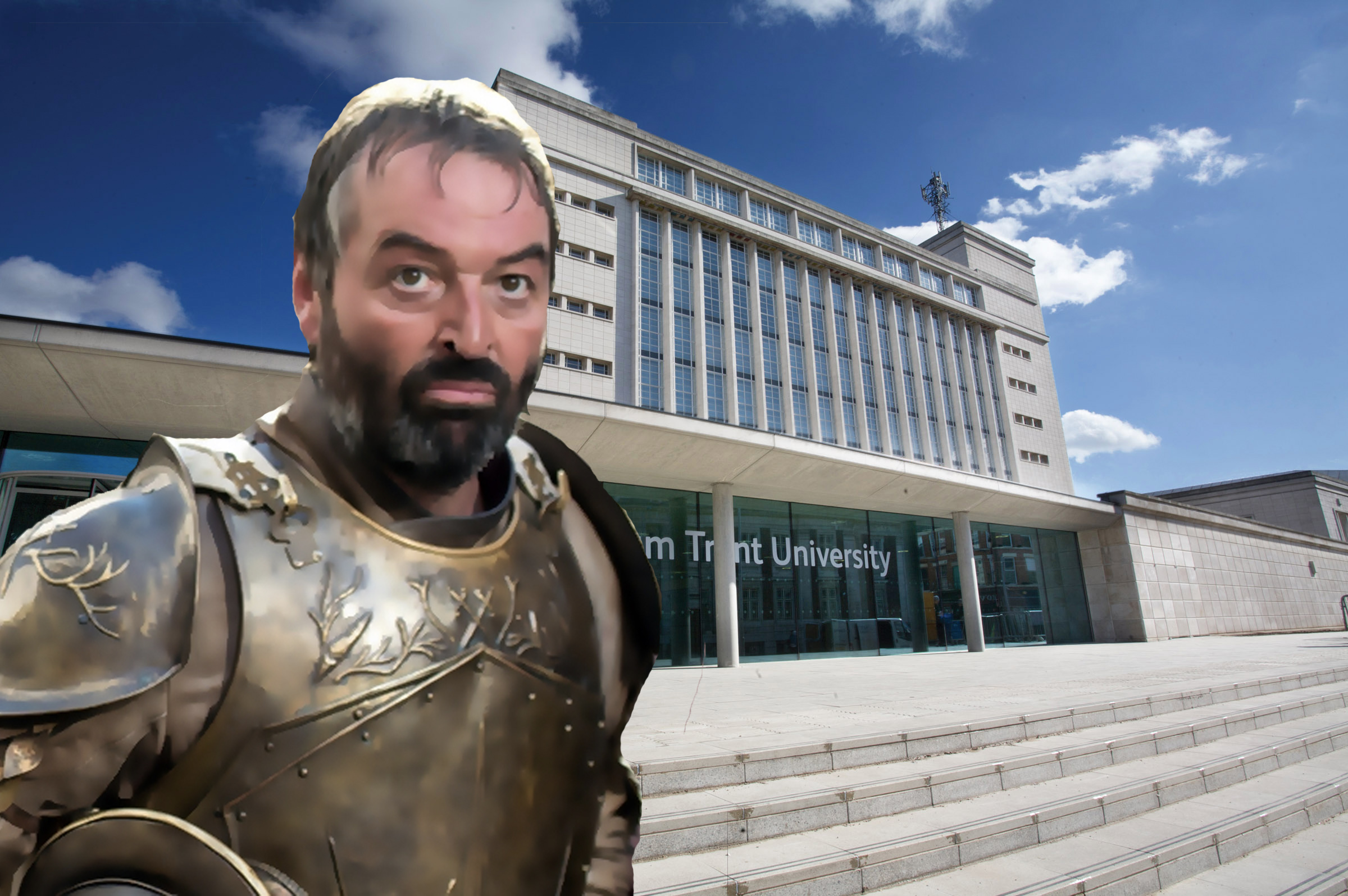 Trent, Trant – they’re pretty much the same, as in they’re both violent and unlikeable. “Too old”, say the Trent finalists, surveying Fingerers’ Corner. 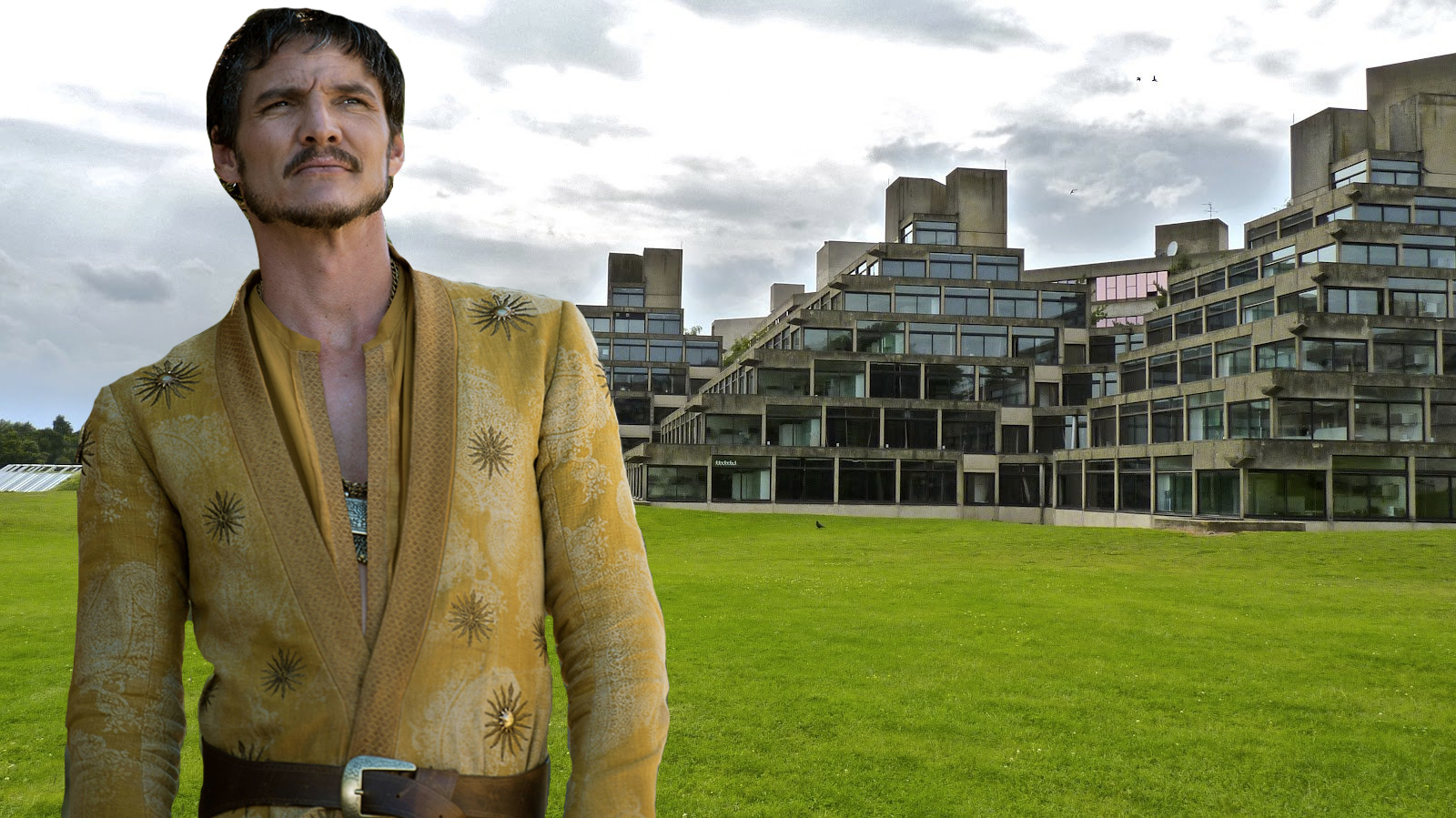 UEA, like Dorne, is exotic – in the way that no-one knows or cares where it is or what goes on there.

Sure, the UEA lake has nothing on the water gardens and you wouldn’t catch the Sand Snakes dead in the LCR, but “UEA is wonderful” is miles more catchy than “Unbowed, Unbent, Unbroken.”

Your dad works for my dad, and you’ll pour champagne on your heads if you want to. Any usurpers will be made to fight in pits for your entertainment, and you’ll never do a hard day’s work in your life.

You’ll just buy people to do that for you, while you reap the rewards and hang out with your mates in interesting coloured dresses. Any foreigners must conform to your way of life, or face extinction.

Edinburgh – The Sons of the Harpy

A Glasgow night out without at least three brawls is considered a dull affair.

Much like Qarth, you’ve been forced to go here because you can’t claim your throne and go to Westeros/anywhere with better UCAS points.

Immediately regretting it? Everyone looking a bit sickly? Yep, sounds about right.

King’s – The Iron Bank of Braavos

Lots of people having drawn-out conversations in dimly-lit old buildings. 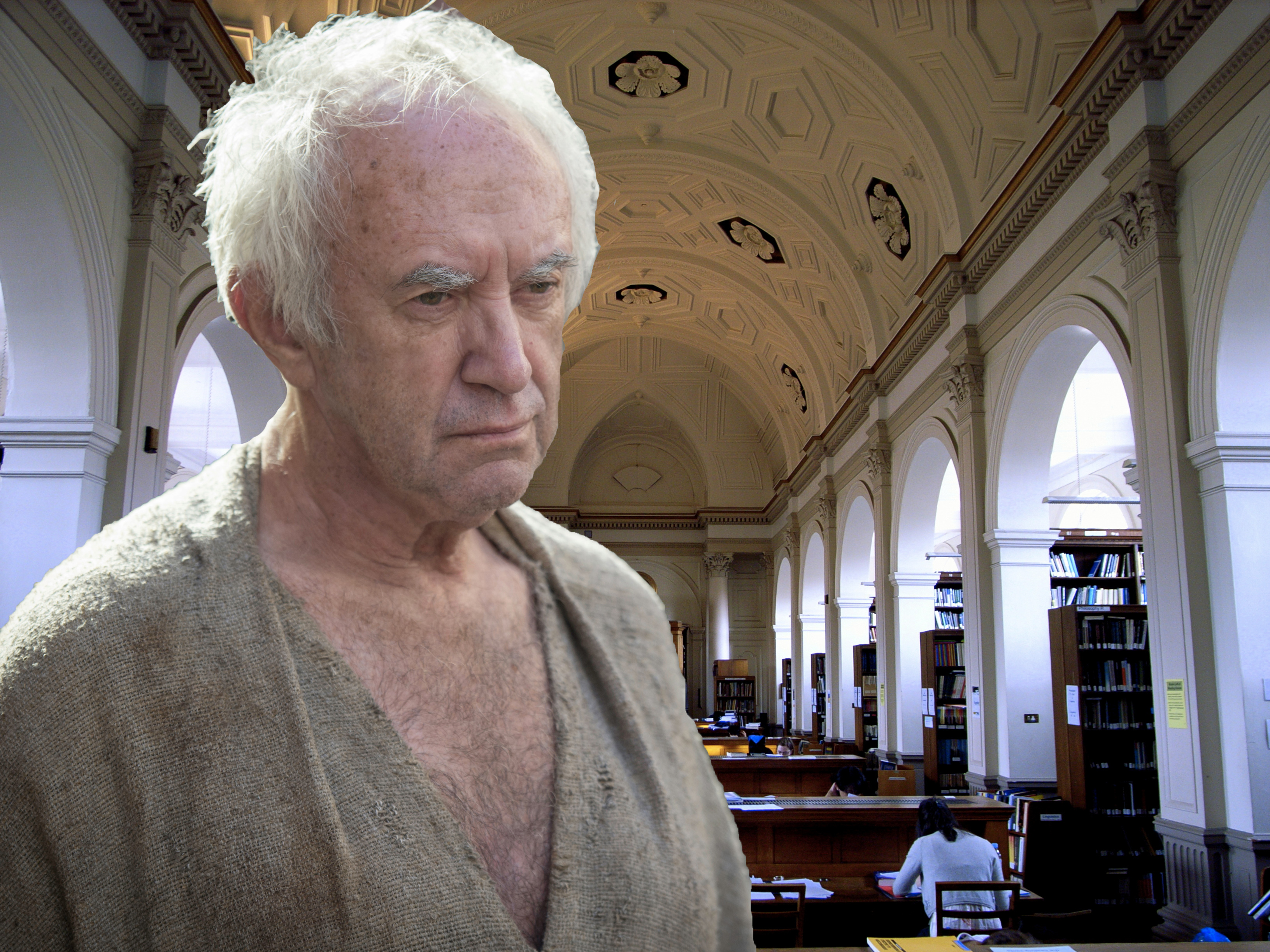 “They are an army which defends the bodies and souls of the common people”, says the High Sparrow. And he’s right you know, the rent is too damn high for London students, and the people of North London and King’s Landing have had enough.

It’s a fair sentiment, but in reality we’re all so sick to death of UCL students screaming into megaphones about the unfairness of it all outside Bloomsbury that you’d quite like to carve into their foreheads “just be normal and come to Loop” and reclaim them from the cult of the worthy.

Sneaky, slimy, and probably sporting a goatee – your sinister accent is unplaceable, and you’ve got a creepily weak handshake.

You’ll always choose power and money over loyalty, which is why you’ll take that Goldman Sachs grad scheme without a second glance.

There are two types of Imperial student: the Podricks, who are inoffensive and studious, and the Ilyns, who are perpetually silent probable axe murderers. 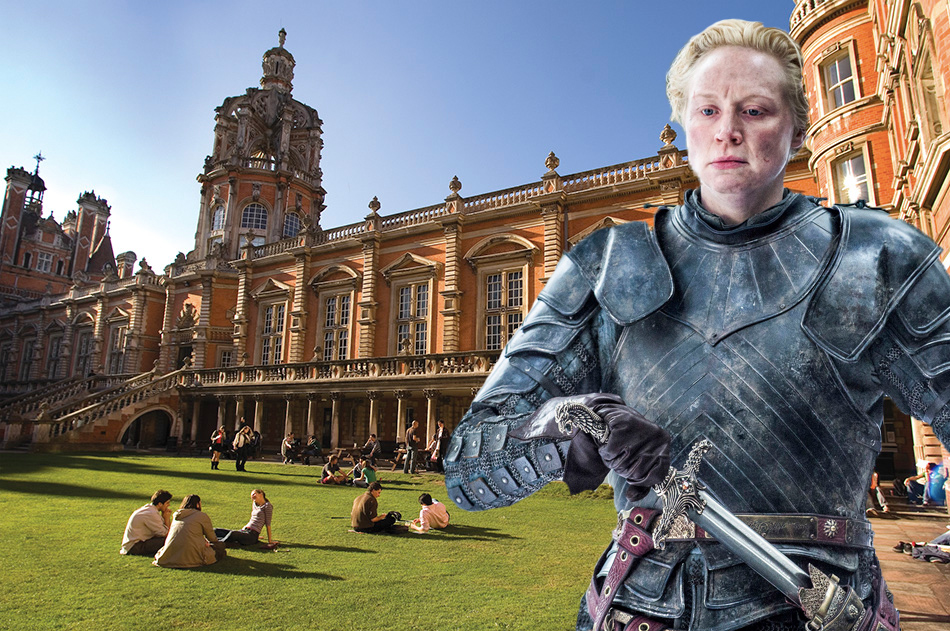 Set in a leafy corner untouched by the troubles of big cities around you, you’re famous for your jewels and sapphires and strong, independent women.

You’re important for being important, but no-one really knows what for.

Devoutly religious, vicious in a fight, prone to demanding independence: Belfast is basically Pyke, although their kingsmoot involves drowning in Buckfast, not salt water.

Sussex – The Brotherhood without Banners

We don’t need banners, you say: banners are mainstream. Well you know what? Everyone else has banners, and you’ve just ended up looking like a bunch of hippie cunts.

Leicester – The people who were building that church 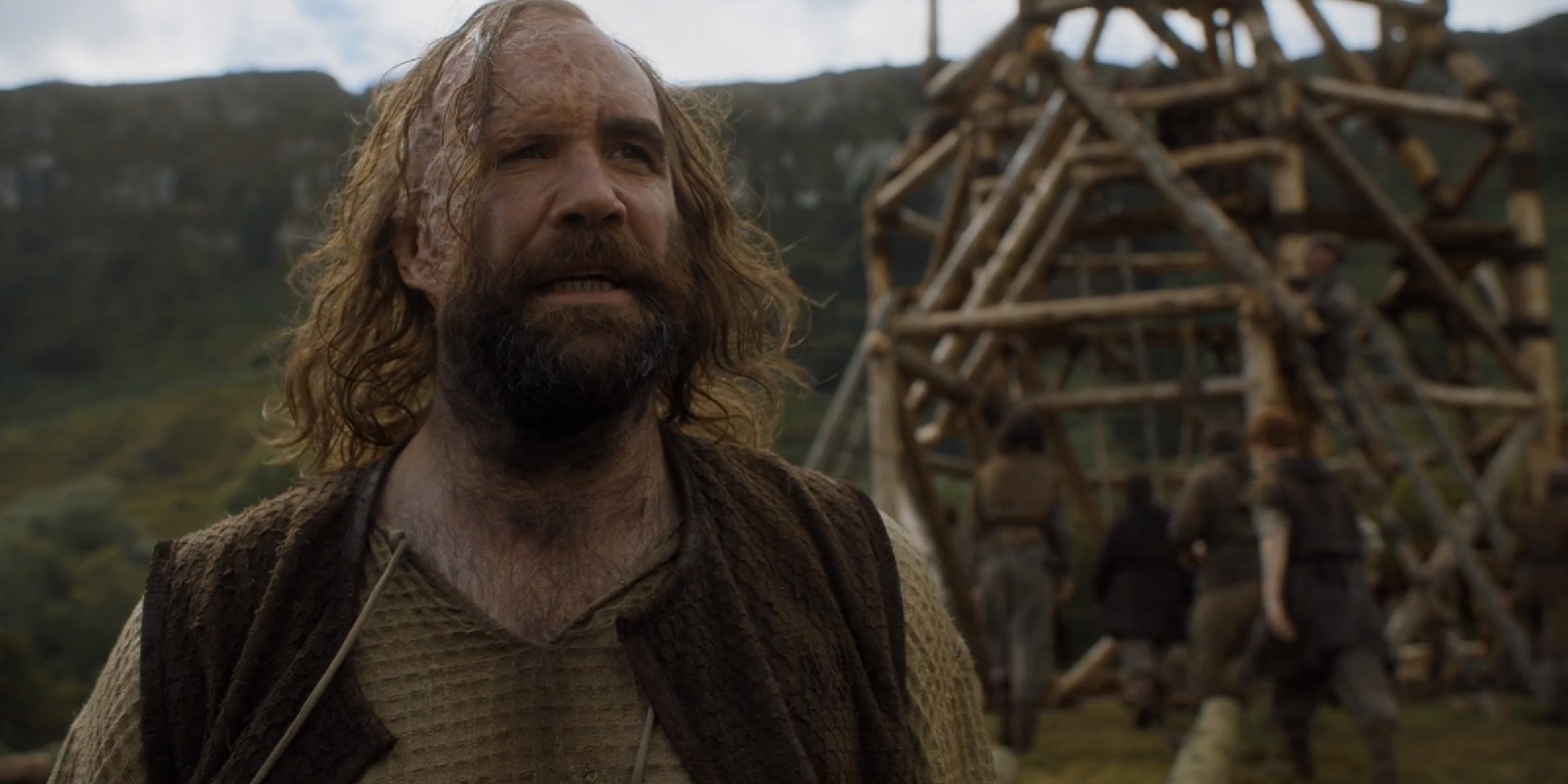 Nothing to see here, move on.

You are miserable. You wear a lot of black. You don’t take orders well.

Waymar Royce didn’t last until the opening credits of the first episode, which is more time than it took most people to disregard Bath as a serious uni.

You wear clothes unfit for the weather – whether that’s sunshimmer bare legs and platform heels on cold cobbled northern streets, or a full fur coat below the wall.

You like to drink, you think everyone else’s idea of you as wild and uncultured is totally unfair, but yeah, you’ve definitely bitten someone in a fight before. 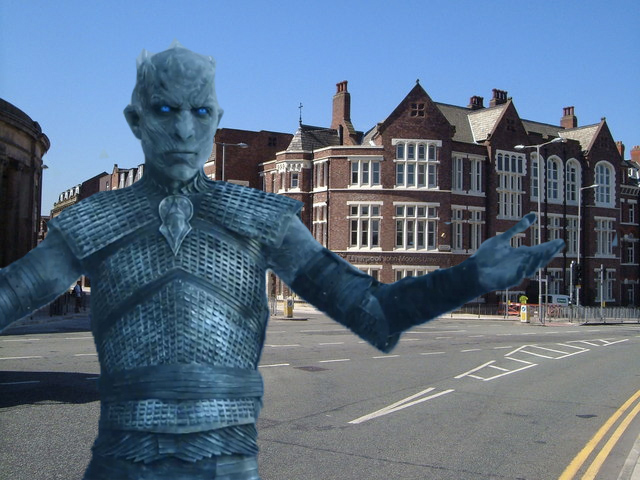 It’s all the same for you, though – you can just continue to spend the majority of your time fucking with them.

The NUS – The Children of the Forest 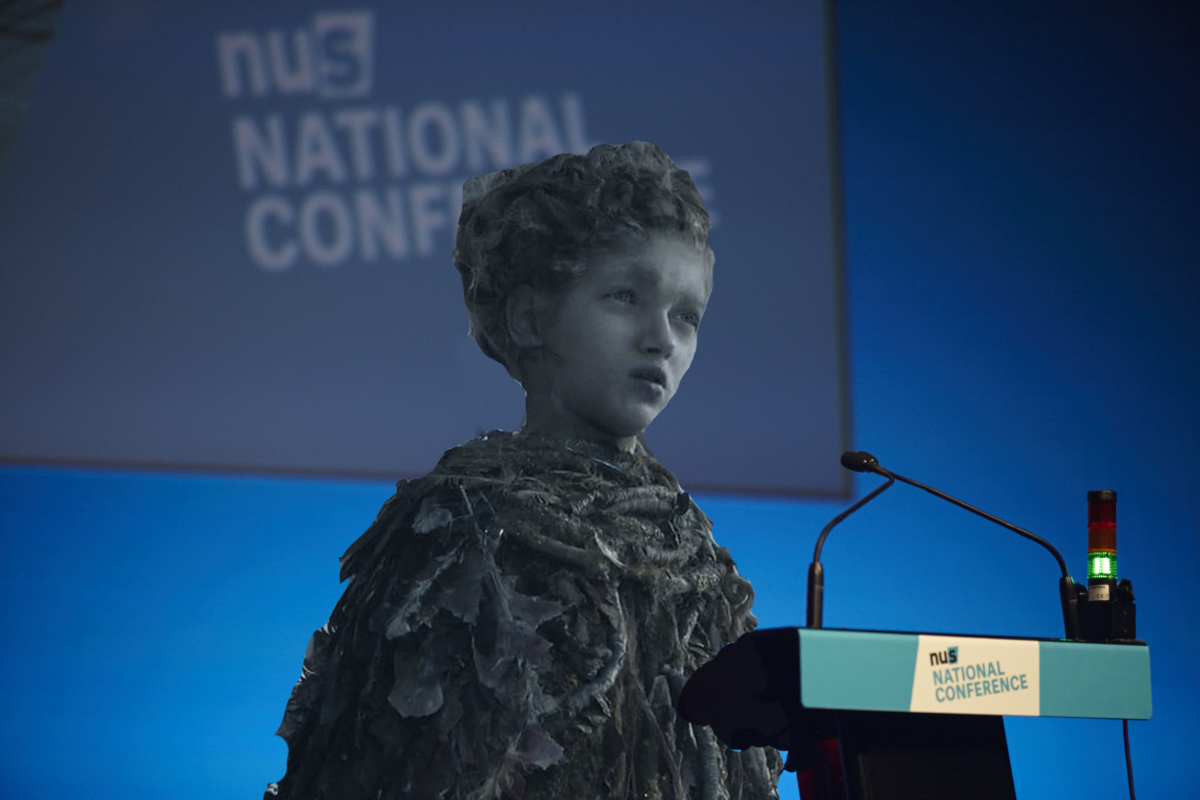 What do you do except for ruin absolutely everything? You created no-platforming, safe spaces and the White Walkers, and now everything is fucked.