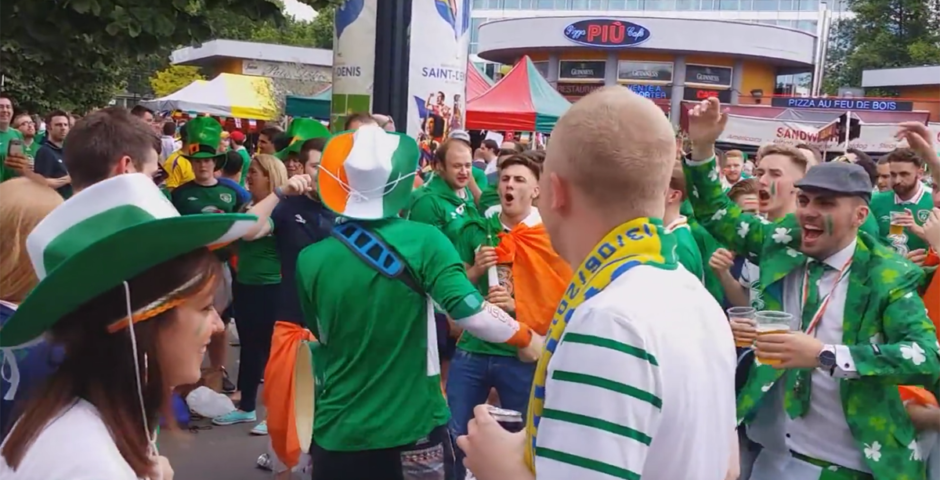 It doesn’t matter who wins the Euros, as long as the Irish fans are there

The Euros have been a mixed bag so far. Marseilles was a bit of a fuck up. England fans clashed with Russian Ultras again last night, leaving 66 injured and resulting in 37 arrests. Today’s England Wales match is, heartbreakingly, clashing with the A-Level Biology exam. I got Turkey in our Euro sweepstakes, and they’ve already lost to Croatia. So yes, it’s easy to get downhearted. But there’s a beacon of light in all the doom and gloom, and that beacon of light is the Irish fans.

We don’t often get to big events, and when we do go abroad, there’s always an uncertain atmosphere. Will we show ourselves up? Will we fight amongst ourselves – furiously explaining to passersby that yeah, even though we’re both wearing the same colours, and even though our managers have the same last name, Northern Ireland and the Republic are totally different teams OK – even though literally nobody else outside Ireland understands why? Will we drink too much? But as ever, once they get off the Ryanair flight and spray paint their entire bodies green, our representatives forget all these worries, and go on it in the best way possible.

We’re basically friends with everyone

OK, I’ll admit, there has been a few hairy moments. But on the whole, they’ve been all the best stereotypes of Irish abroad. Gregarious, tipsy, a friend to all. Here they are giving some friendly advice to England fans, in a hilarious self-reflective way, like when you see a mate you’ve fallen out with years before on a night out, and you nudge them in a way that says: “I know we don’t usually get along, but you’ve had a few, and you keep fighting with that prick Vladimir, and you’re making a real show of yourself, you little tyke, so let’s just have a nice night. I know, it’s usually me you have to warn about this! How the tables have turned.” Look how incredibly good natured it is:

Here they are stopping everything in a heartwarming moment where they help an elderly French couple change their tyre:

Our songs are excellent

There’s a generally good repertoire for Irish fans abroad, which usually revolves around Fields of Athenry and if all else fails, drunkenly yelling olé. But this year has been a cut above. It doesn’t matter whether you put in Will Grigg or Shane Long, this song is an absolute banger and the live renditions just keep getting bigger and better:

Is there drinking? Yes, yes there’s drinking. There’s a lot of drinking, it’s why they’re there, it’s why they get out of bed in the morning. Football is secondary to this fact. But bizarrely, they’ve been very well-behaved while absolutely blocked. They’ve even been very very quiet when they need to be, for lovely BBC NI reporter Ita Dungan.

We’re aware of our own limitations

Northern Ireland lost 1-0 in their first match to Poland, and the Republic only equalised against Sweden. By anyone’s count that’s not a great start. They could get angry about it. They could get disheartened. Or they could just make friends with the other teams and get on with their lives.

Are the Republic of Ireland really going to beat Italy? Will anyone even be able to watch Northern Ireland play against Germany next week? Probably not. Best to make the most of it while we’re here then.

Well actually, the flags, like the technical skill of Irish teams, aren’t works of creative genius, they’re awful. They’re all emblazoned with Father Ted quotes – no really, there are so many Father Ted quotes – Conor McGregor pictures, jokes about leaving the immersion on and all the other paint-by-numbers Irish sayings your mum probably has on a tea-towel at home. But that’s not the point – the dedication is the point. They haven’t just brought themselves, they haven’t just organised flights for 12 people – on Ryanair, the most accommodating airline in the world – they haven’t just bought a knock-off green shirt from the market, they’ve gone to the hassle of printing these flags with love and care and probably a fiver from each person on the coach. It doesn’t matter that every other group of Irish guys has the same one, and it doesn’t even matter that once they get to the stadium, they’re told it’s an inch too big either side and have to put it away, what matters is the dedication to shit group chat jokes, and getting drunk while dancing under it later.

Jimmy Nesbitt Northern Ireland flag is an early highlight of the Euros pic.twitter.com/Ysk0FtWhtr

Some of the flag Irish fans brought to the Euros are quality ????? pic.twitter.com/96oxNviqBg

The Irish fans at #EURO2016 have got a strong flag game pic.twitter.com/97tqrsJ2fc

This one is my favourite one because someone will eventually share it in a Belfast buy/sell Facebook group with the hashtag “our wee country”:

In many ways it doesn’t really matter who wins the Euros – I mean, let’s be honest, it won’t be either the Republic or Northern Ireland – and that’s what every idiot in a green afro vomiting in the middle of a French street knows to be true. It’s the knowledge that lets them rise above the petty disturbances with pale fleshy guys called Roy, dressed as an angry topless crusader. There are seldom occasions where you can piss off to another country with all your mates, get paralytic drunk, sing, and drink some more. Those memories, not what happens on the pitch, are what people will take back to their grey lives the rest of the year. It doesn’t matter if you’re shit at football (and both teams are), what matters is how loudly you can broadcast your fun to cover how shit you are. In that respect, Irish fans have already won.