Castle JCR votes to disaffiliate from the SU

Castle has voted overwhelimngly to disaffiliate with the SU with 195 votes for and only 18 against in a JCR vote that concluded this evening.

The vote was proposed in relation to the recent SU election where RON was disqualified across each election despite winning almost every category, amongst other issues with the DSU.

Disaffiliation will not mean that college students cannot use DSU buildings or participate in DSU societies, however the JCR will no longer promote or publicise events from the DSU but will continue to vote in DSU assemblies.

A document posted on The Castle Freshers page notes the reasons for disaffiliating including the DSU being an undemocratic institution which has “on multiple occasions disregarded the will of the SU Assembly” as well as wrongful disqualitfation of RON in the recent SU election. 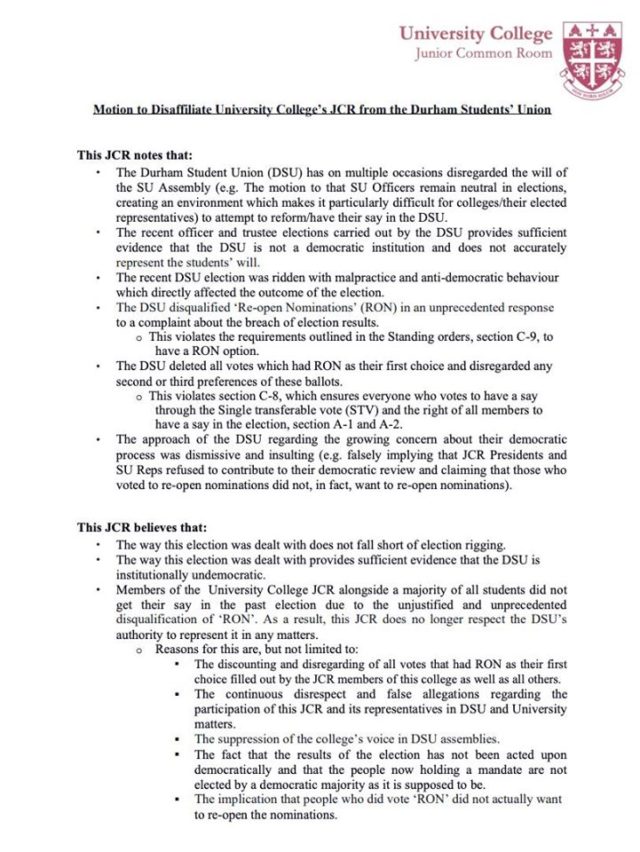 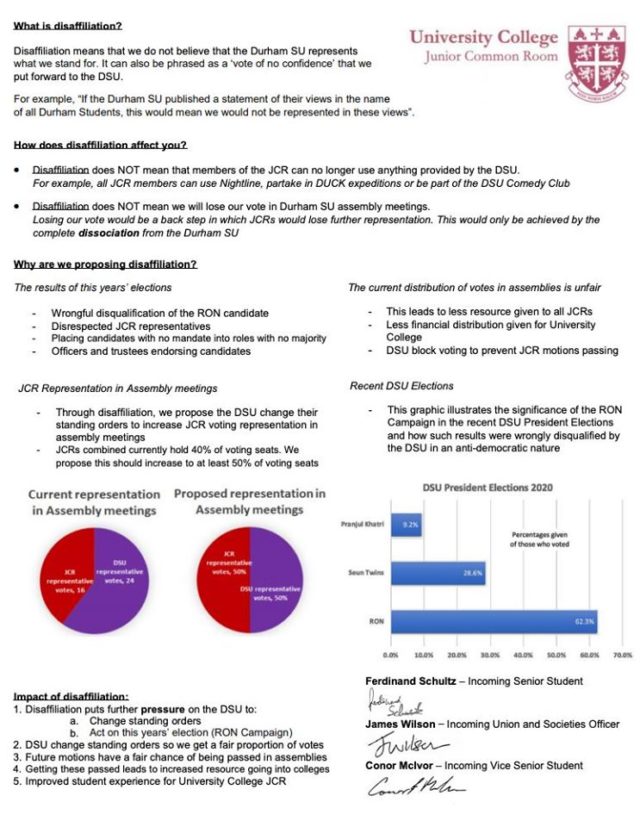 “Members of the University College JCR alongside a majority of all students did not get their say in the past election due to the unjustified and unprecedented disqualification of “RON.” As a result, this JCR does no longer respect the DSU’s authority to represent it in any matter.”

The document also expresses anger at how the DSU has placed candidates with no mandate in roles with no majority as well endorsing officers and trustee endorsing candidates during the election process.

A member of the Castle JCR told the Durham Tab:

“I voted to disaffiliate from the DSU due to their blatant distain for democracy; the two-week postponement of the results shows that they were desperately finding some reason to disqualify RON and shoehorn in candidates they wanted in an undemocratic fashion.”

“RON’s disqualification was absurd; it isn’t a candidate, it is a safety net designed to hold the DSU accountable to the voices of students, in the case they no longer represent our views. I find the SU President elect’s dismissal of the RON vote completely unacceptable, and it simply confirms how out of touch the SU is with students’ actual concerns.”

215 Manchester Uni freshers to withhold over £300,000 in halls rent strike